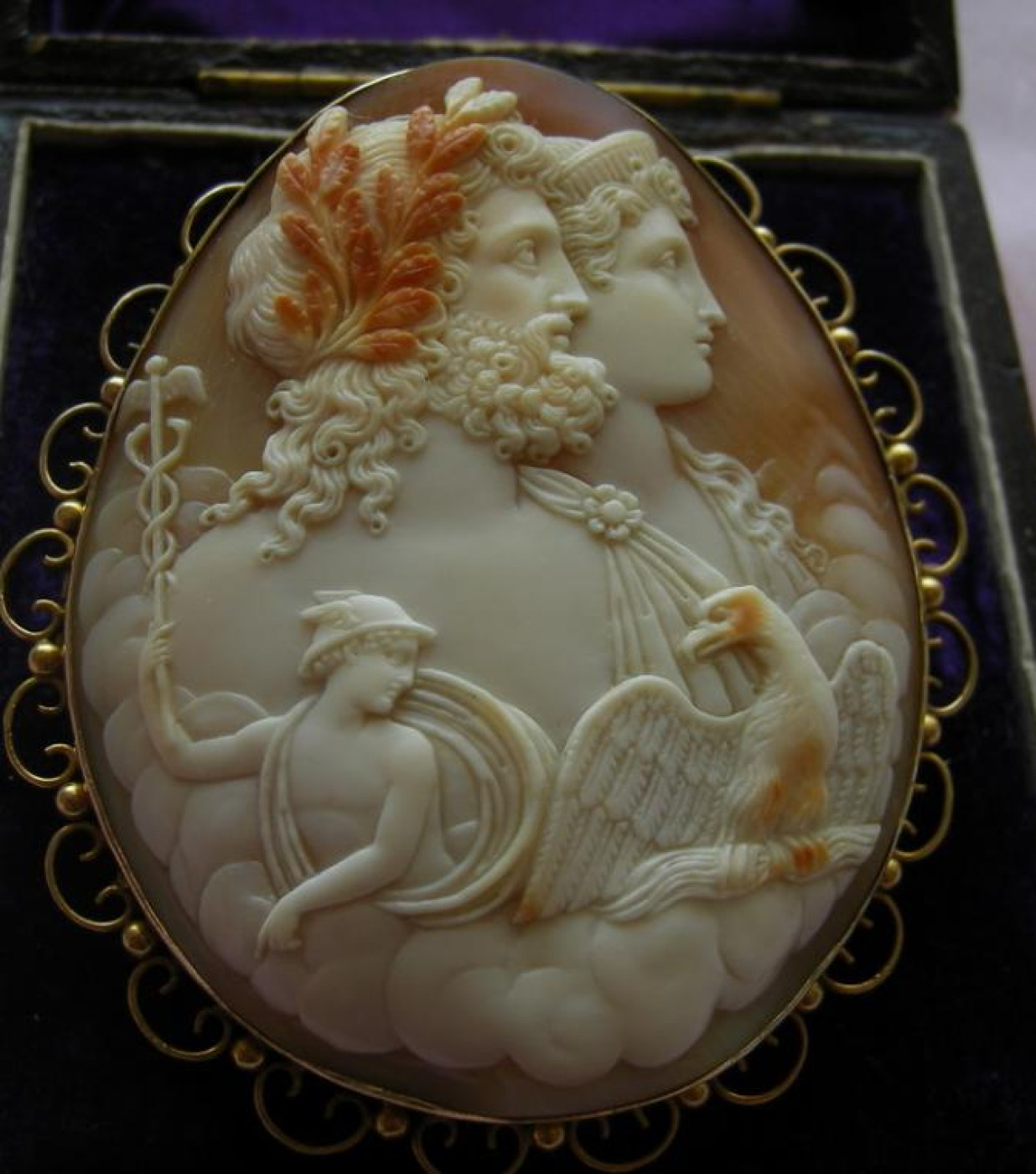 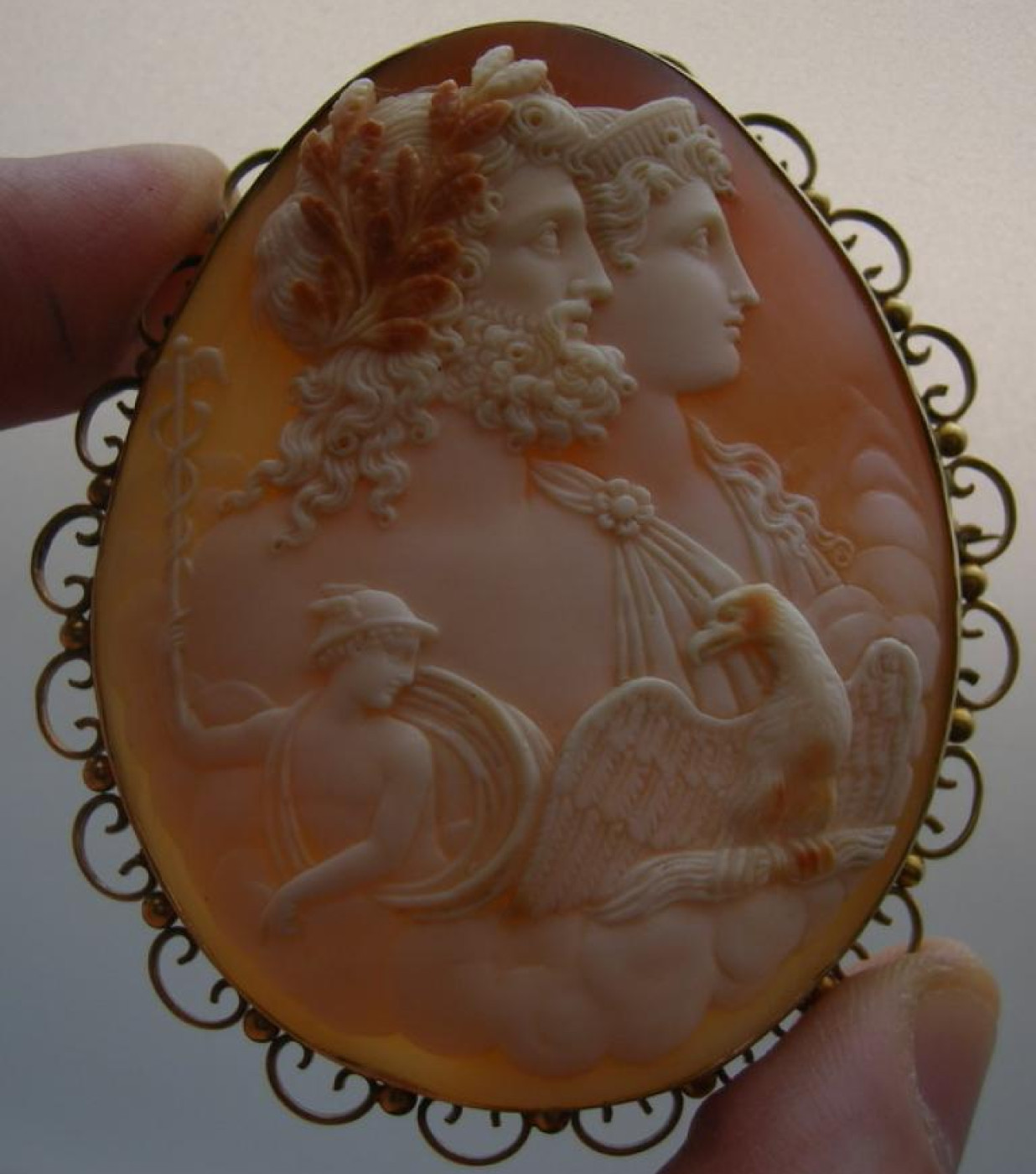 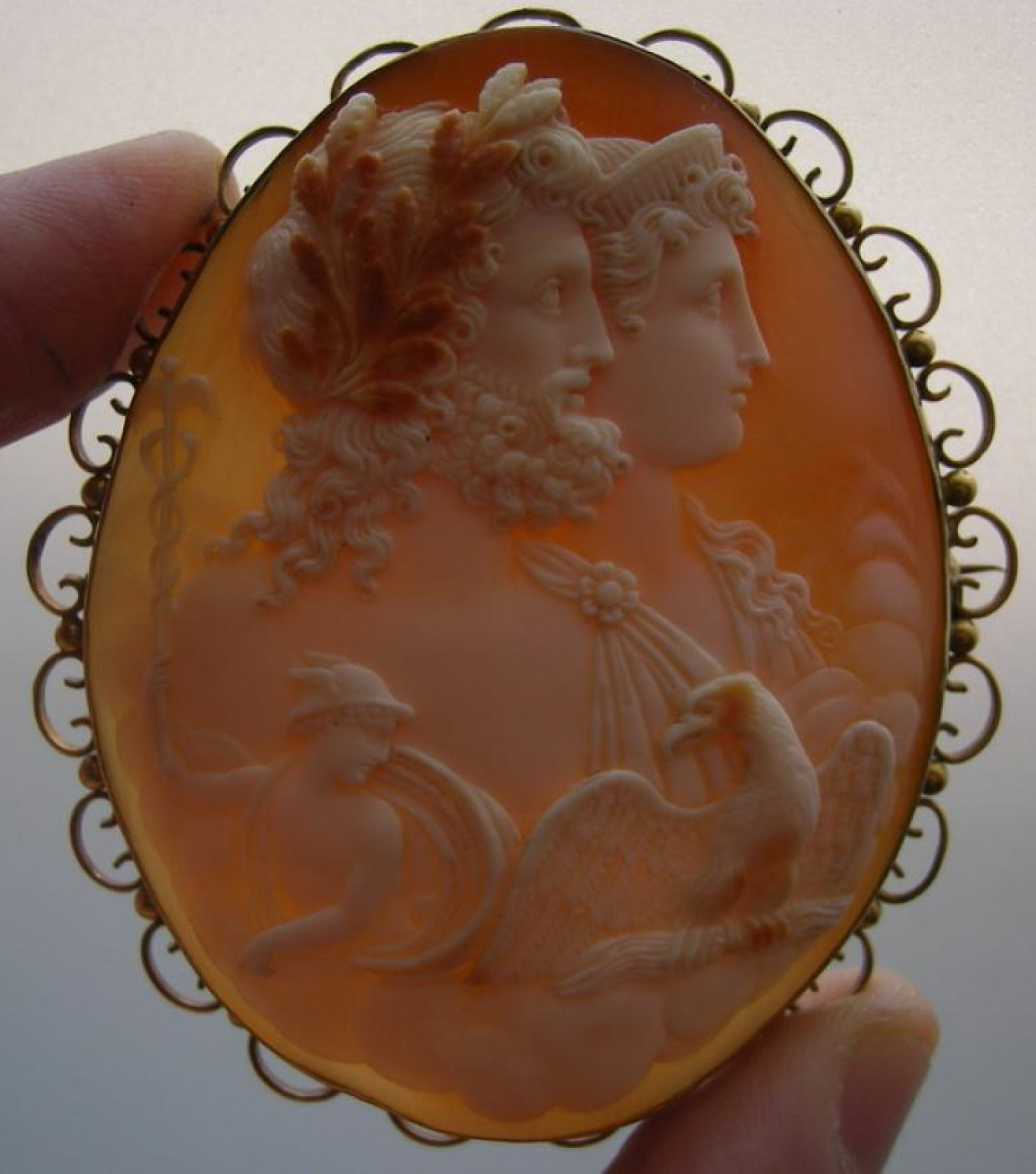 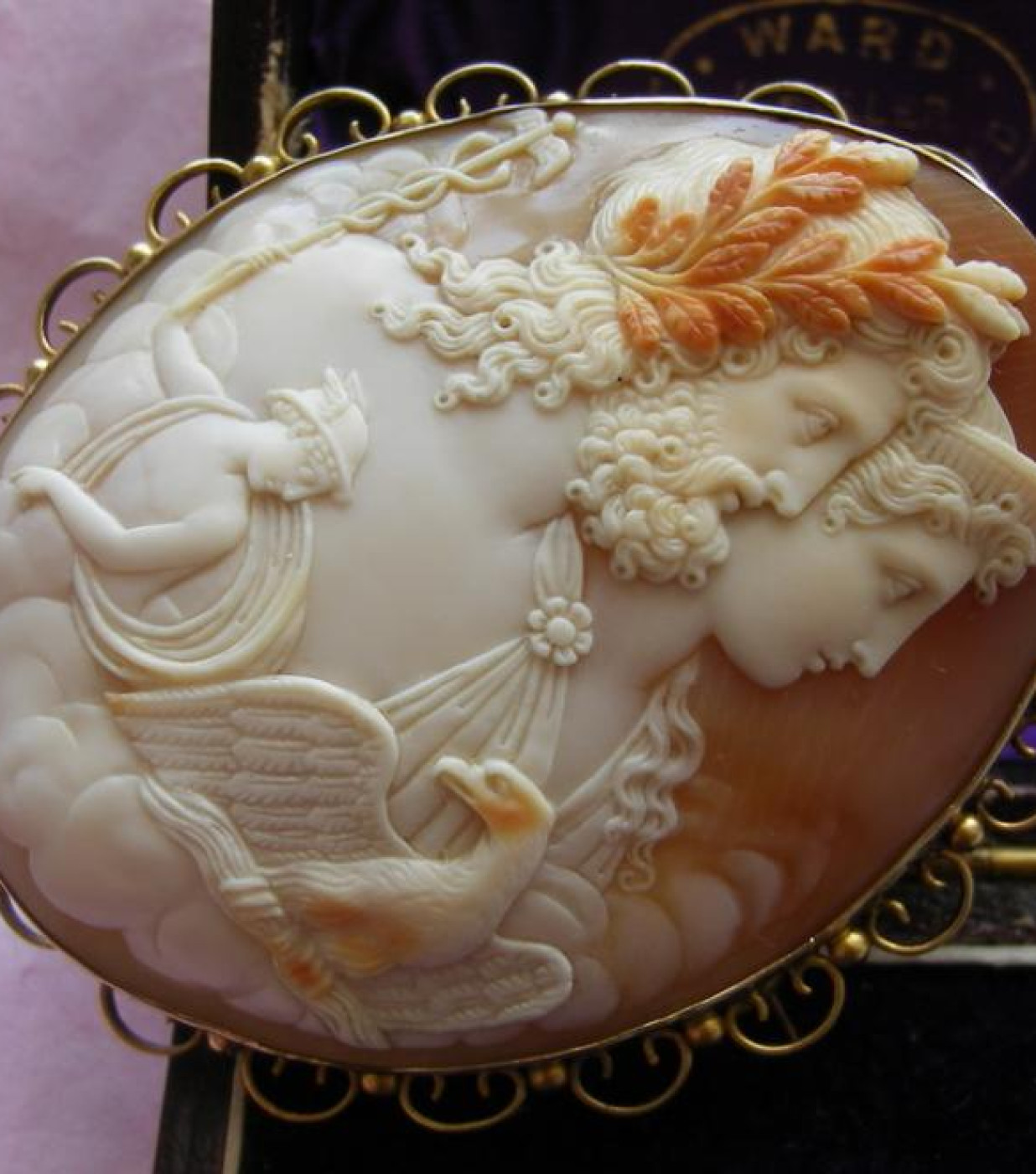 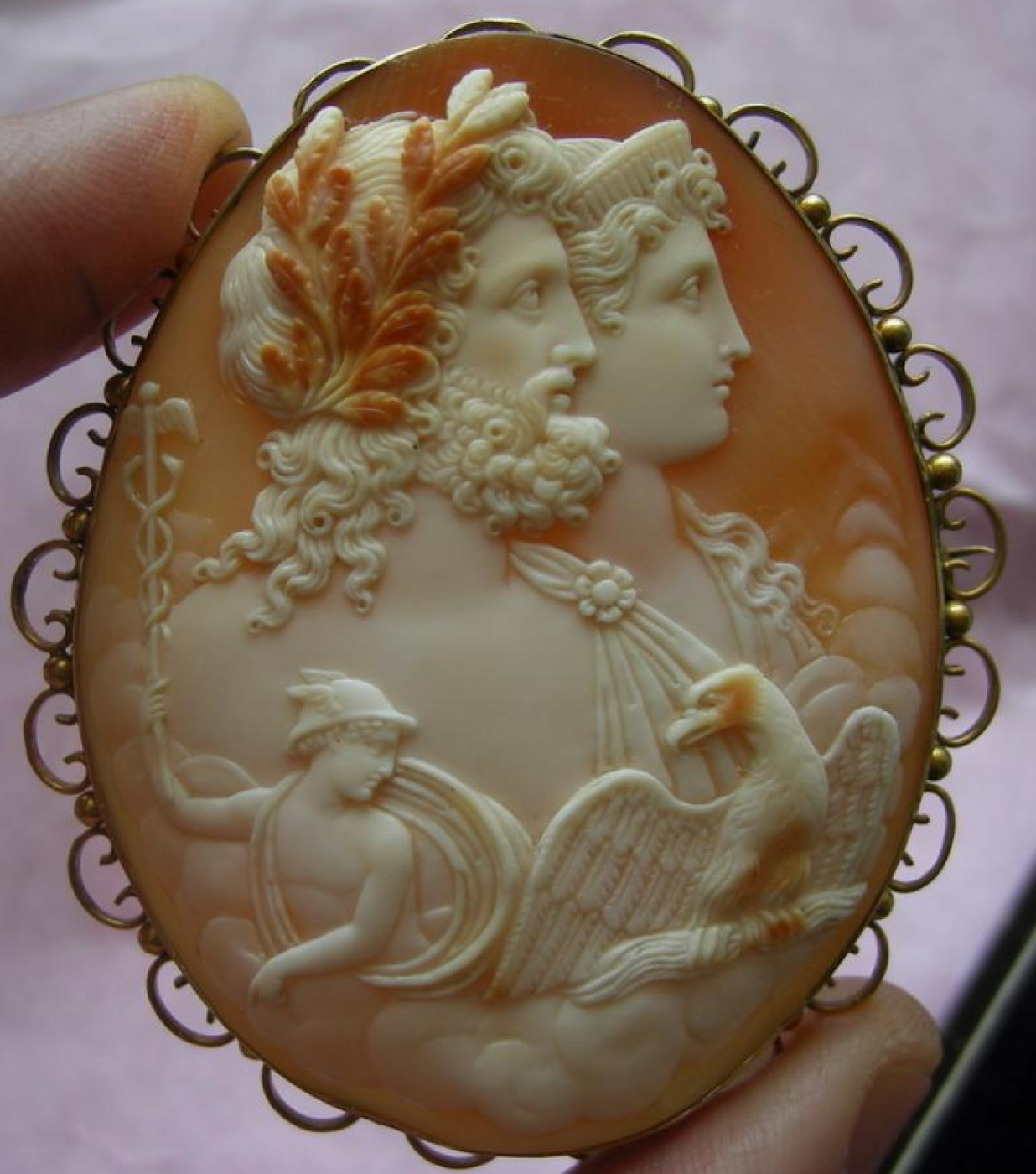 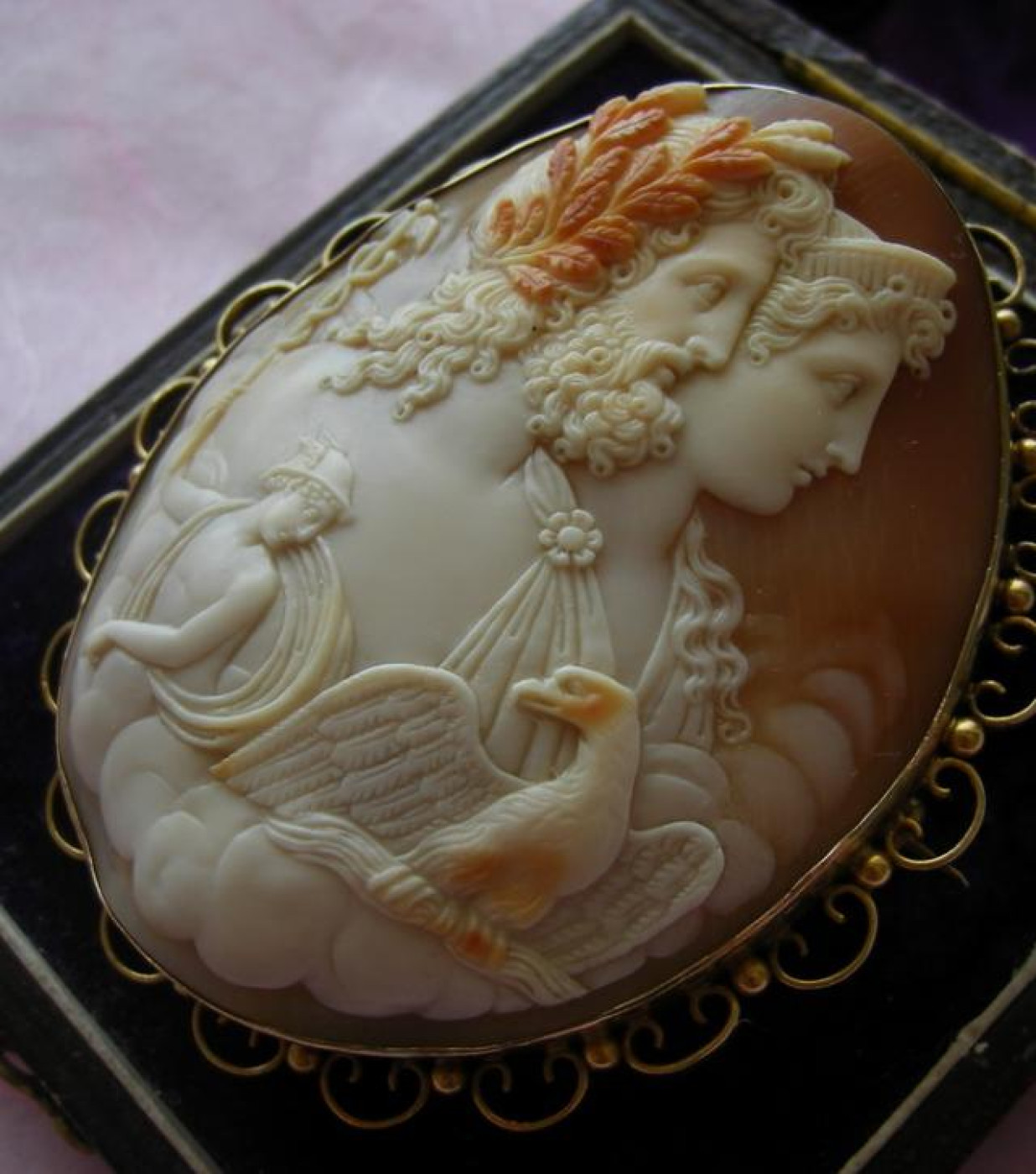 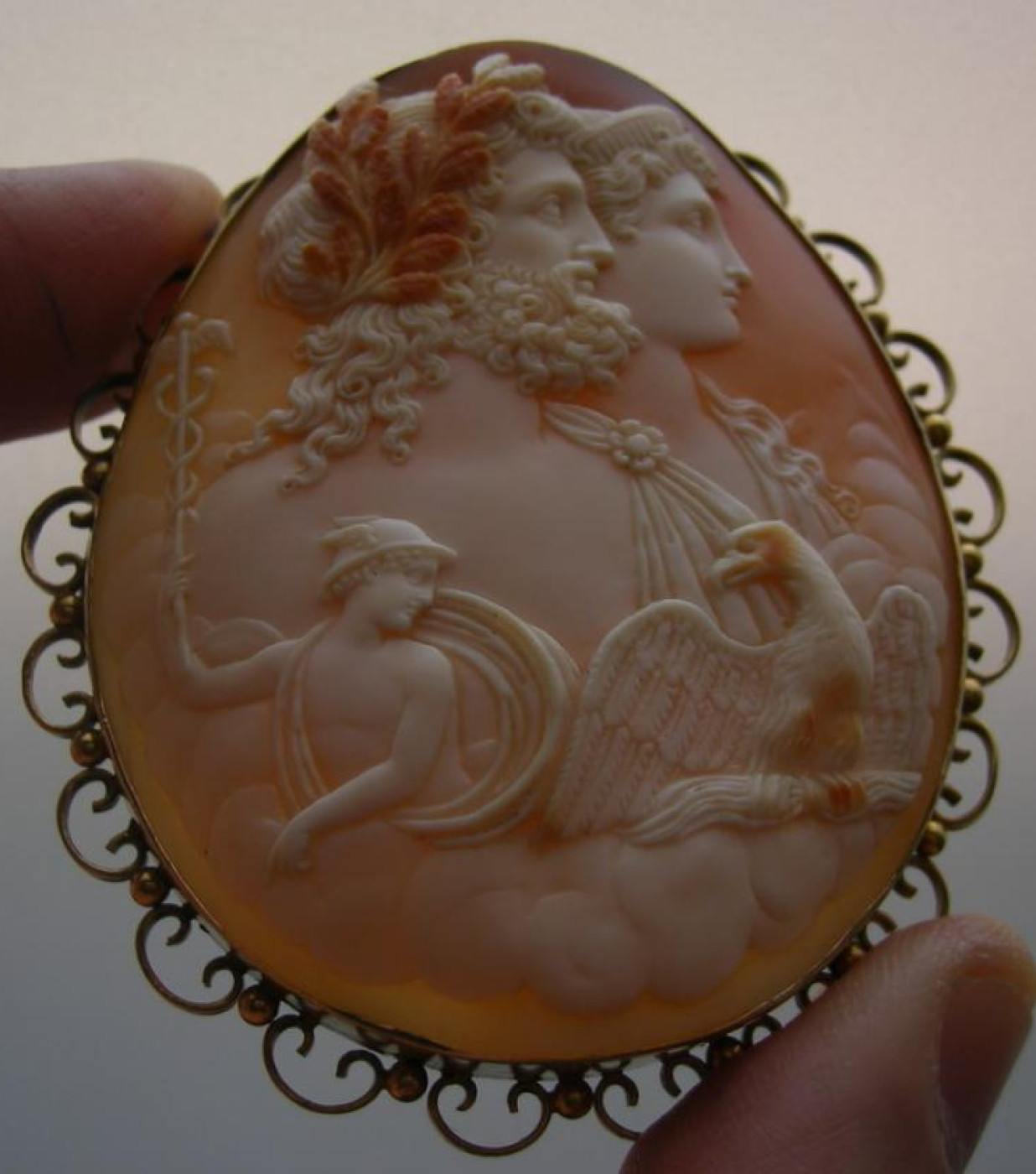 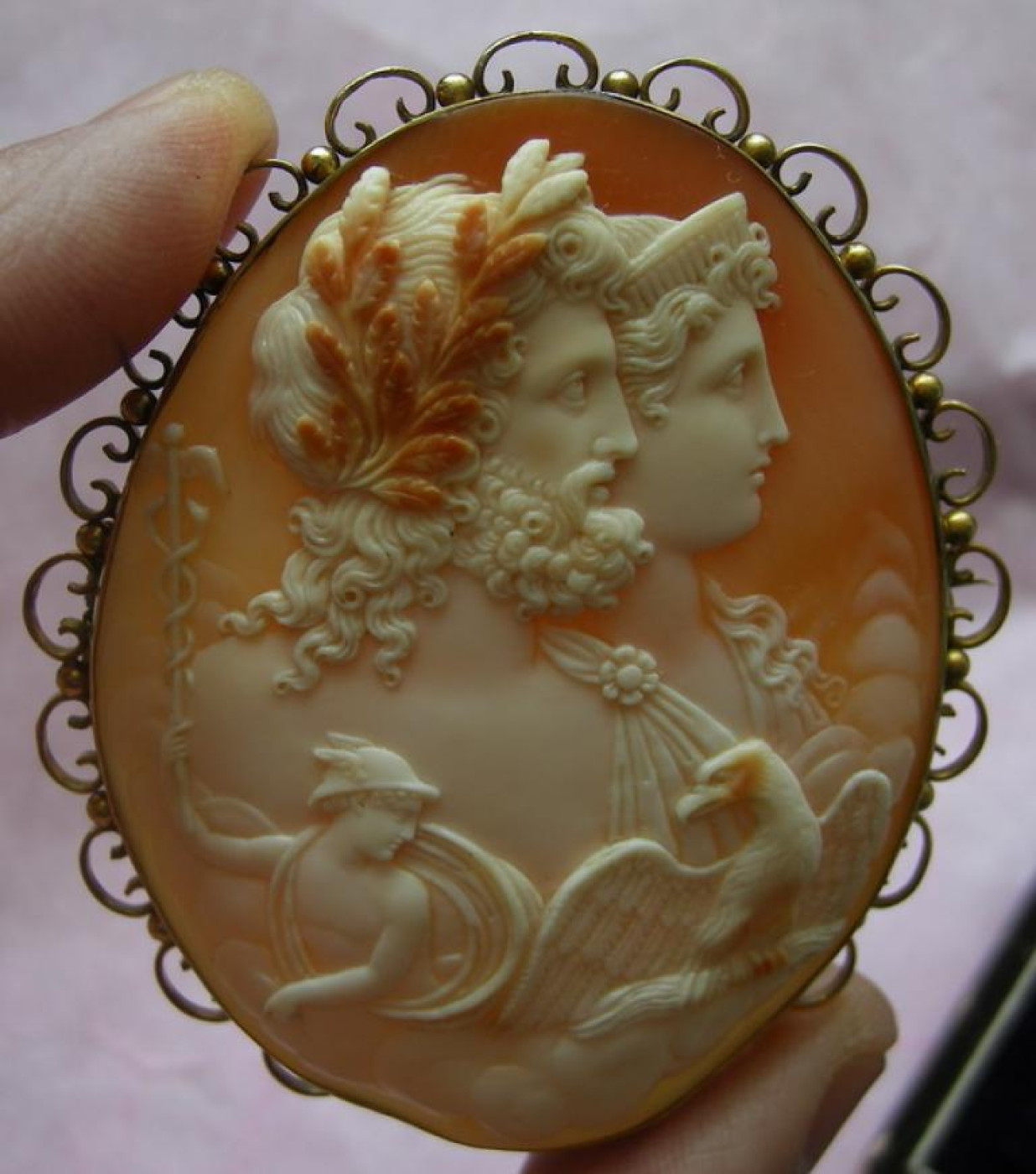 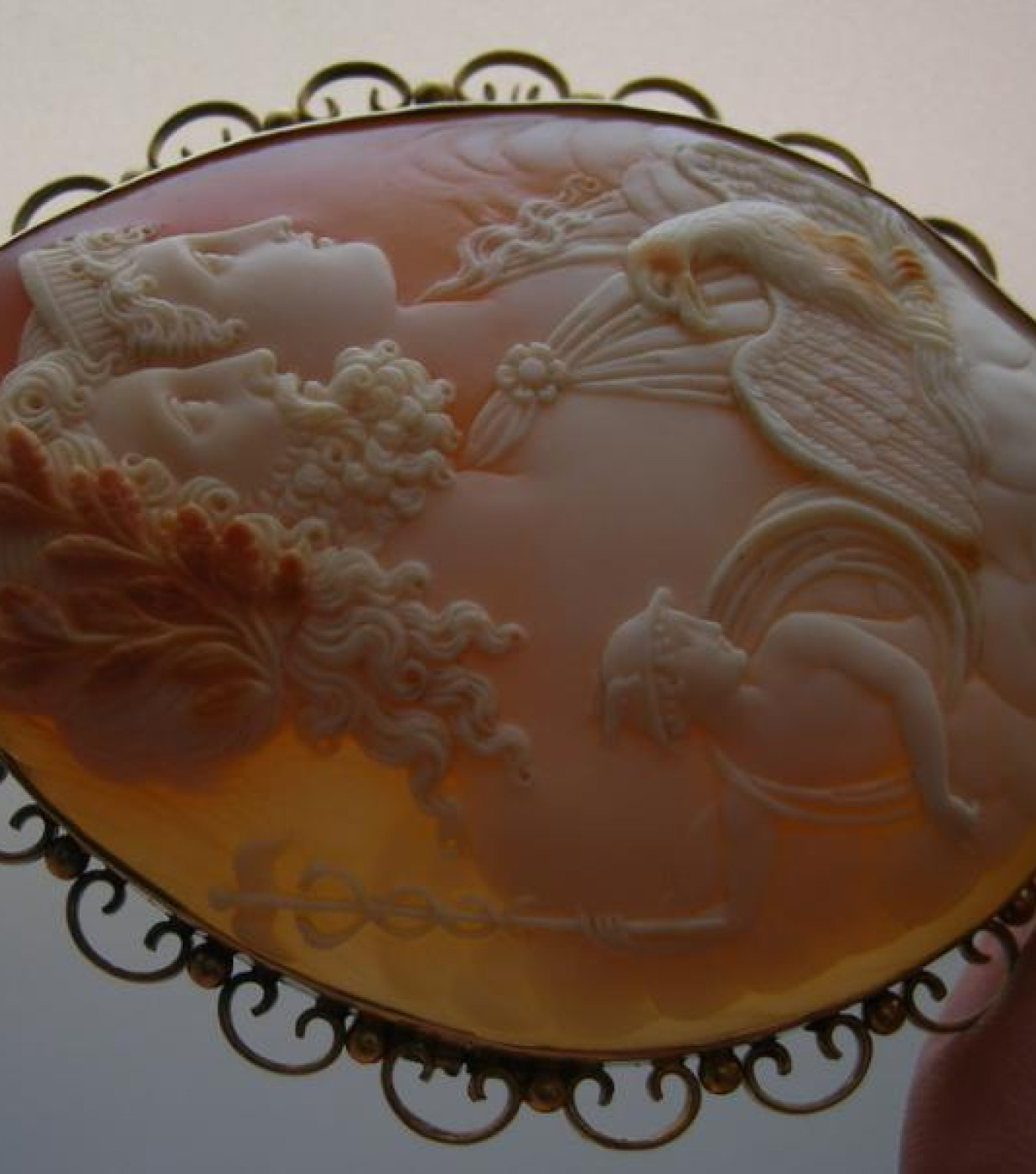 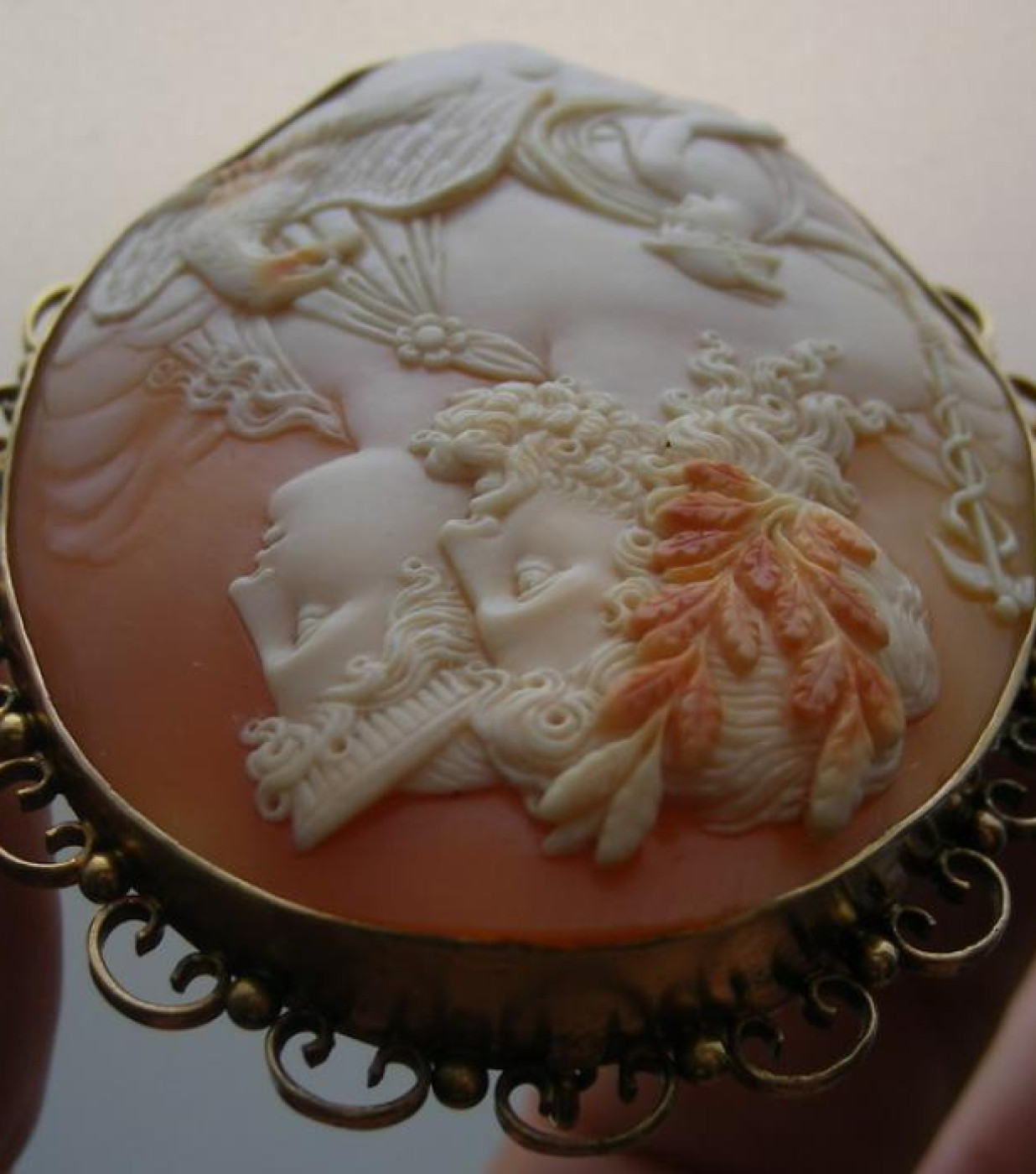 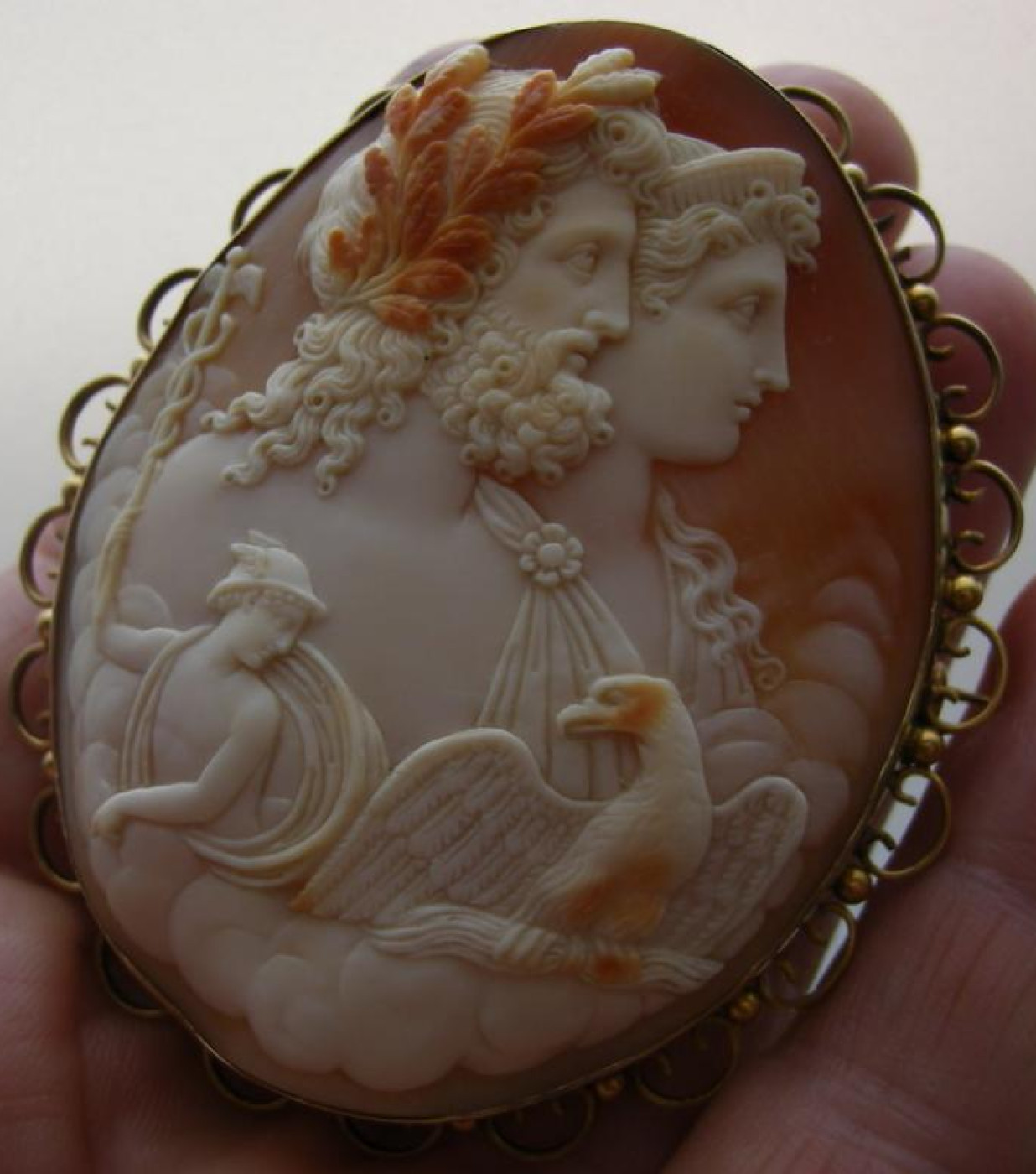 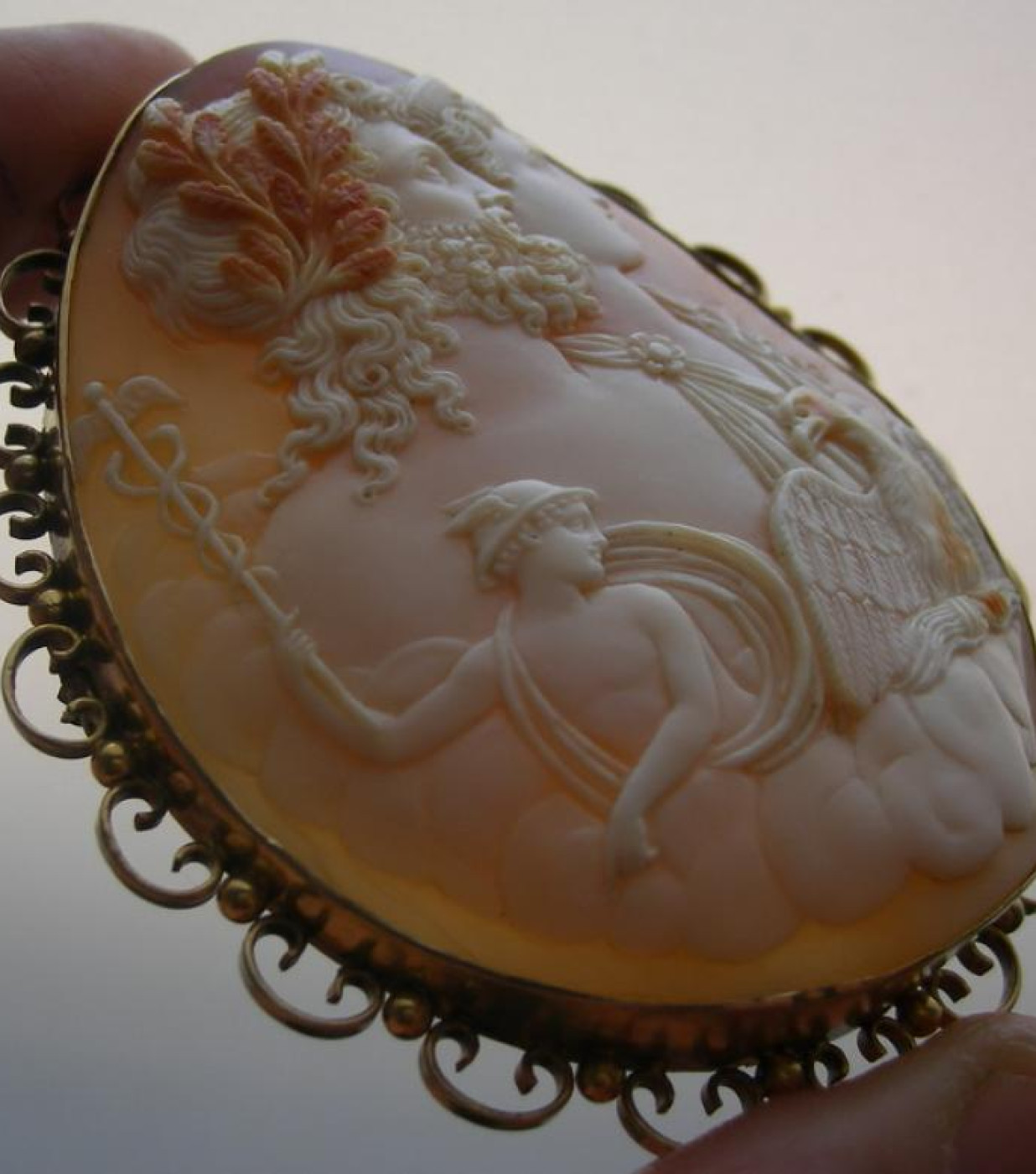 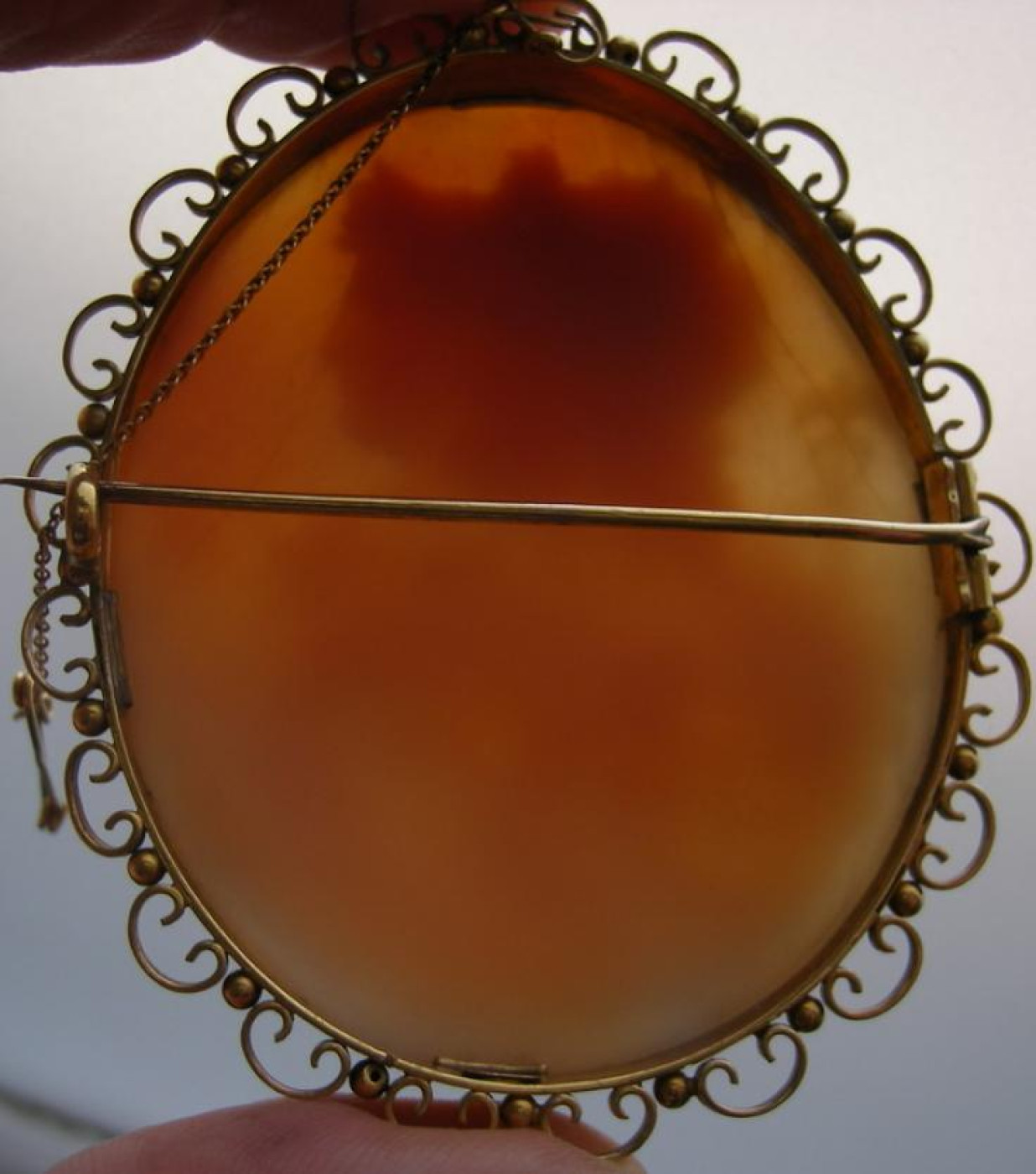 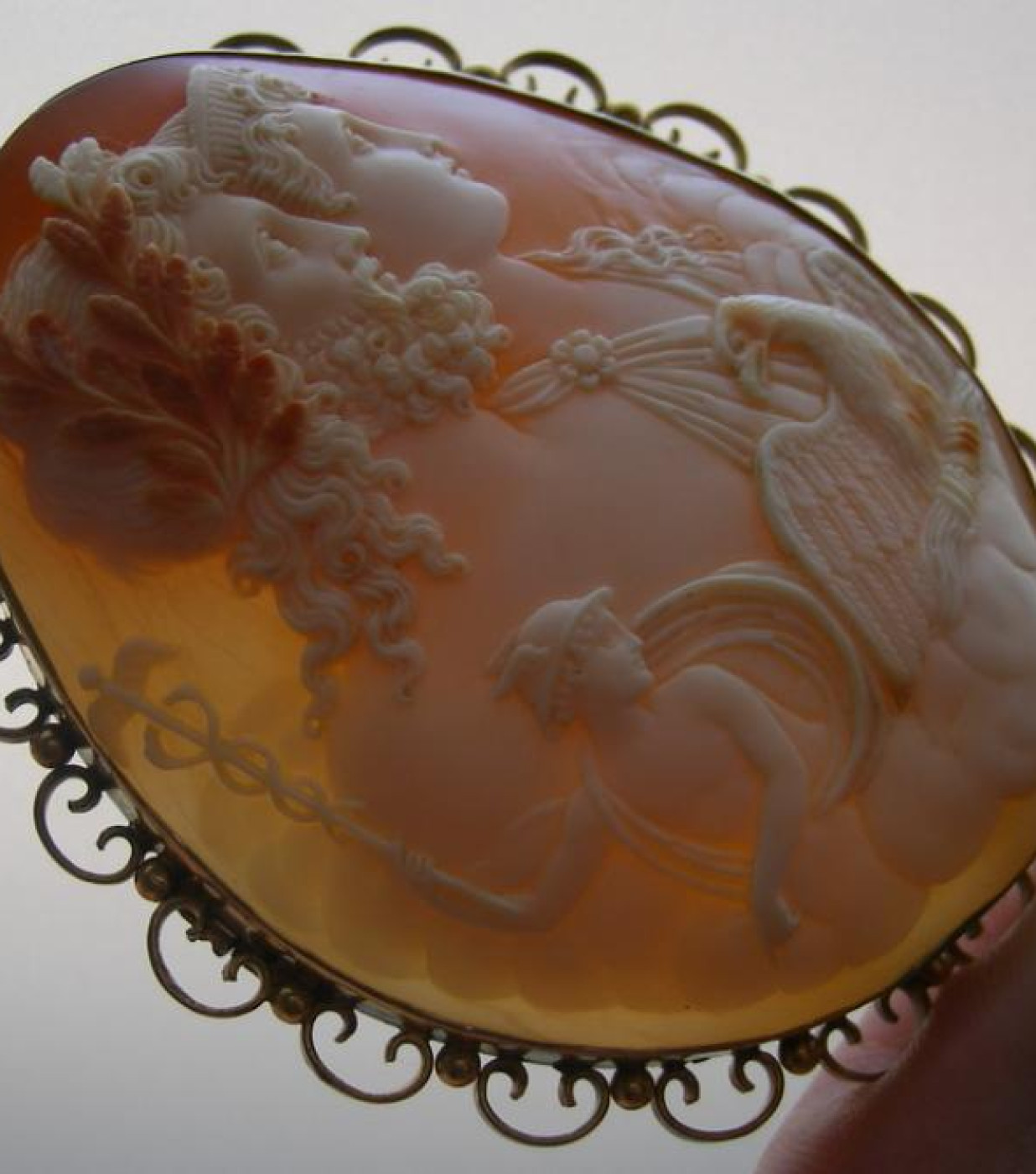 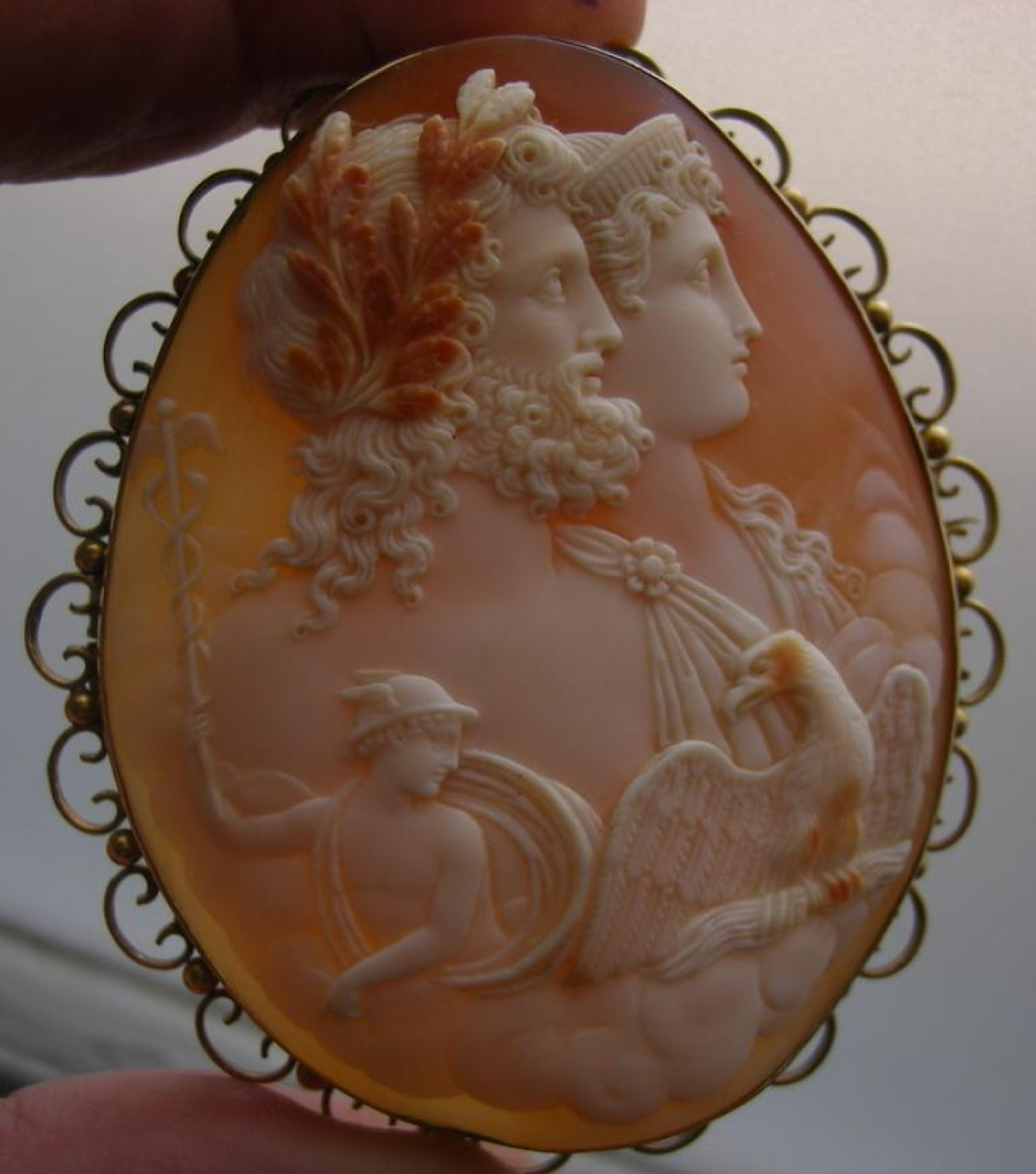 More than Museum Quality and huge cameo depicting  Zeus and Hera, the King and the Queen of Gods. The eagle holding thunderbolts, is the symbol of Zeus. There is also Hermes (son of Zeus), holding his caduceus, The caduceus in Greek or Wand of Hermes is typically depicted as a short herald's staff entwined by two serpentine creatures - these are alternatively thought to depict two worms or else two snakes in the form of a double helix, and sometimes surmounted by wings. Look how the carver used the color of the shell to evidence the  leaves adorning the head of Zeus and the feathers of the eagle. Everything is so realistic,  this cameo seems just like a sculpture.  This is one of the most beautiful cameo I have ever seen, the pictures speak by themselves. The frame is spectacular too, so elaborate and wonderful. This cameo is still in its original fitted box. This is another masterly carved cameo. A very desirable collectors piece, rare and museum quality cameo.
A Bit of History:
Zeus  in Greek mythology is the king of the gods, the ruler of Mount Olympus, and the god of the sky and thunder. His symbols are the thunderbolt, eagle, bull and the oak. Zeus was the child of Cronus and Rhea, and the youngest of his siblings. In most traditions he was married to Hera, although at the oracle of Dodona his consort was Dione: according to the Iliad, he is the father of Aphrodite by Dione. He is known for his erotic escapades, including one pederastic relationship with Ganymede. These resulted in many famous offspring, including Athena, Apollo and Artemis, Hermes, Persephone (by Demeter), Dionysus, Perseus, Heracles, Helen, Minos, and the Muses (by Mnemosyne); by Hera he is usually said to have fathered Ares, Hebe and Hephaestus.His Roman counterpart was Jupiter.
In Greek mythology Era or Hera (Juno for the Romans) was the wife of Zeus, and so the Queen of Gods. Faithful and jealous wife. She was the Goddess of the wedding and protector of the married women and of the birth and her constant fight against the infidelity of Zeus gave origin to the recurring theme of the "Hera's jealousy". Hera gave birth to Ares (God of War), Hephaestus (God of Fire), Hebe (Goddess of Youth) and Eileithyia (Goddess of the birth). Hera, jealous wife, often persecuted lovers and sons of Zeus. She never forgot an offence and was well known per her revengeful nature. Being angry with the Trojan prince Paris who preferred Aphrodite (Venus), Goddess of Love, to her, in a beauty contest, Hera helped the Greeks in the War of Troy and was satisfied only when the city was finally destroyed. The corresponding figure in Roman mythology was Juno. Her sacred symbols were the cow and the peacock. Hera was portrayed as a solemn and majestic figure, often sat on a throne while wears as crown the "Polos", a typical head gear of a cylindrical shape worn by the most important Mother Goddesses of several antique cultures. She held a pomegranate in her hand, symbol of fertility and death. The temples dedicated to her date back to 7th century B.C. and they were the earliest historical examples of Monumental Greek Temples, the "Heraion" in the island of Samo and the "Heraion" of Argo.