Urania the Muse of Astronomy 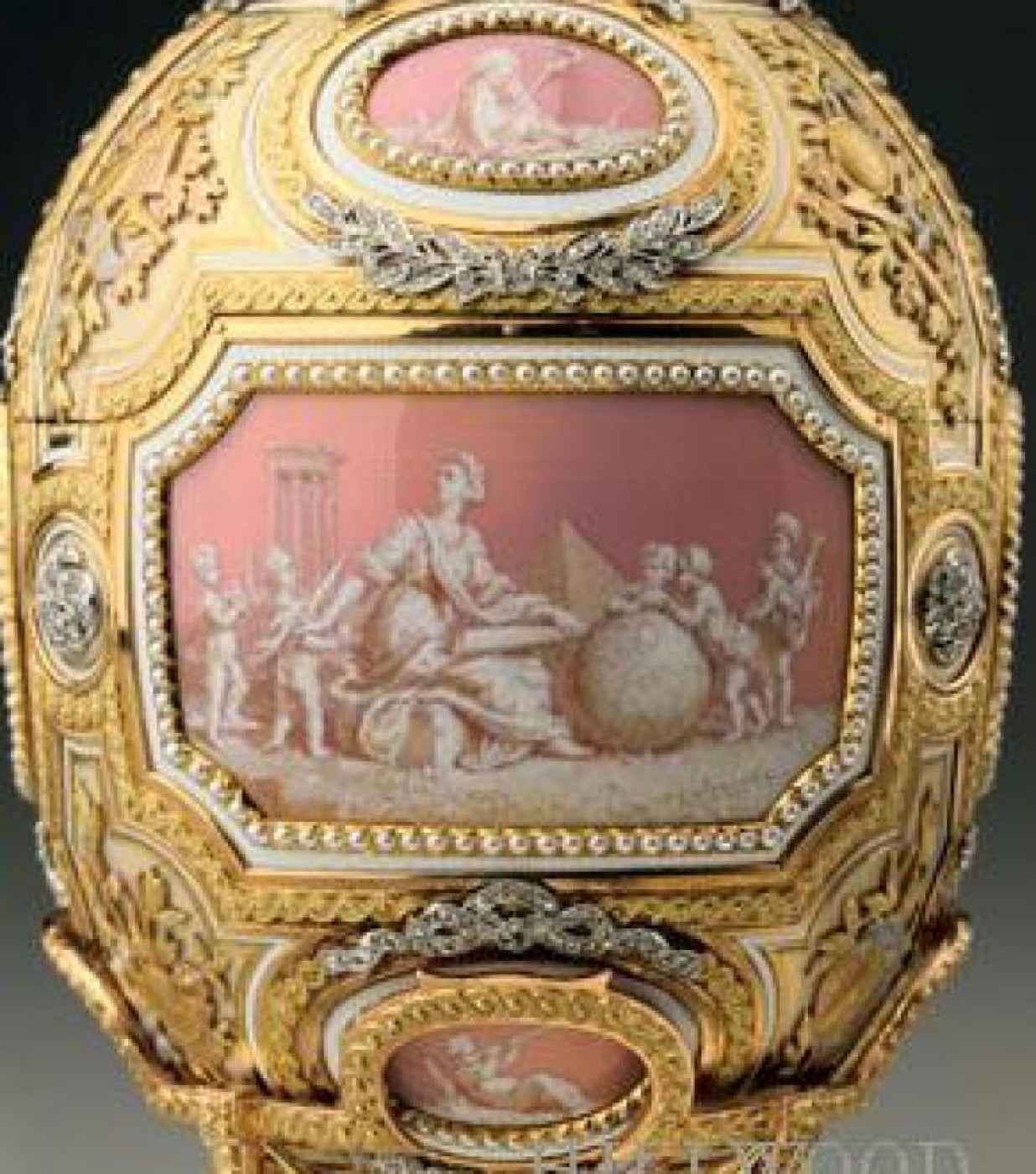 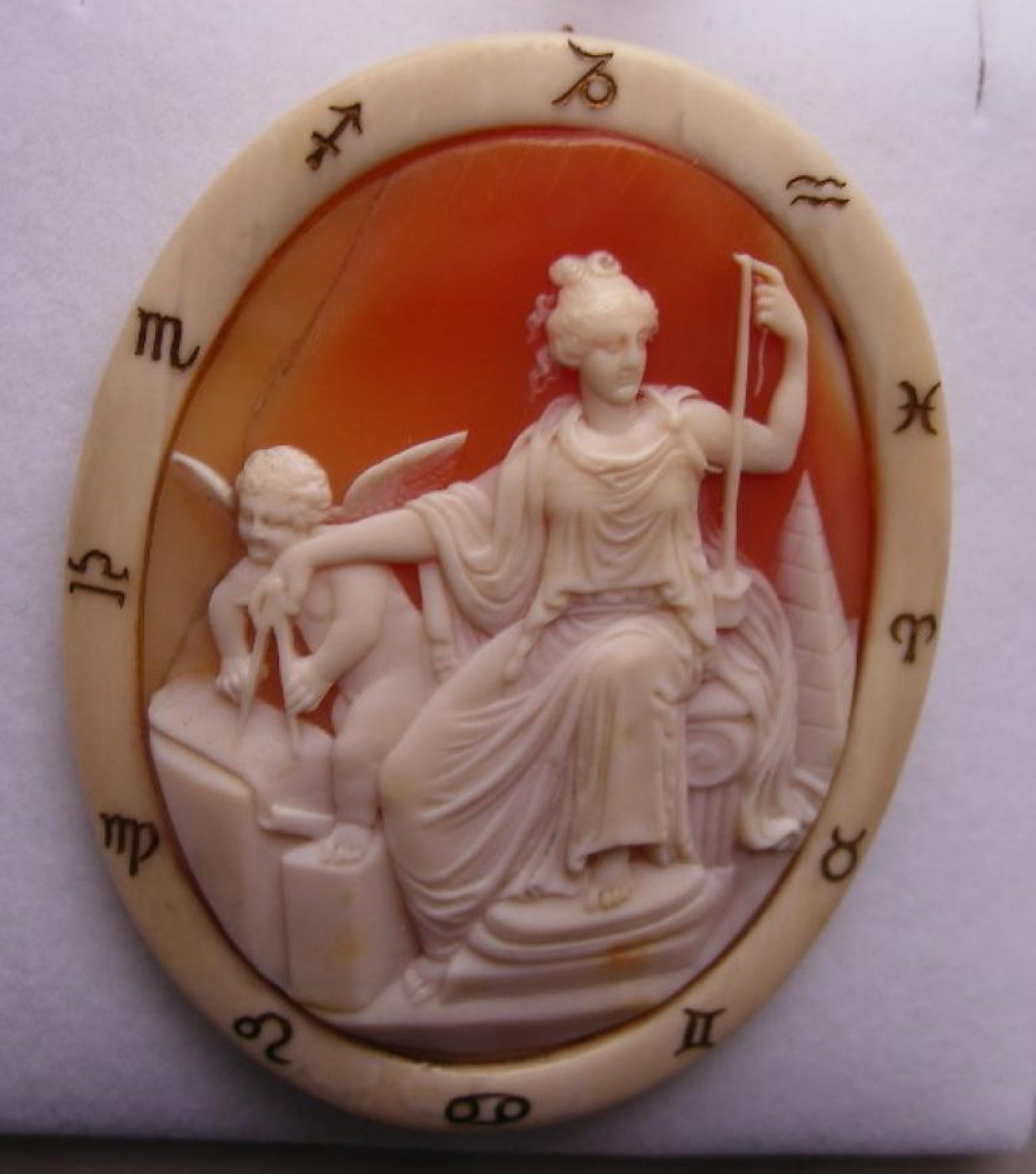 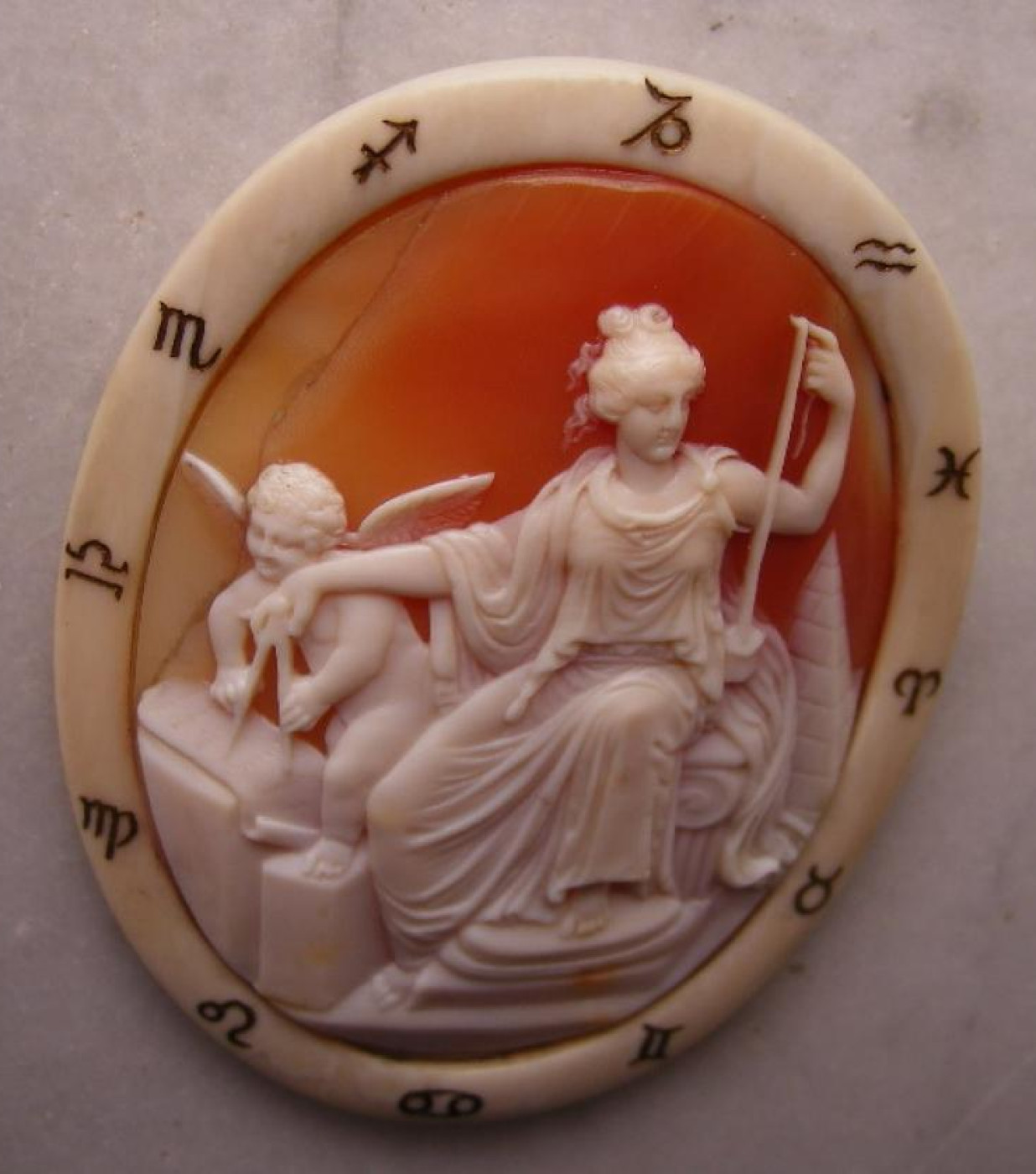 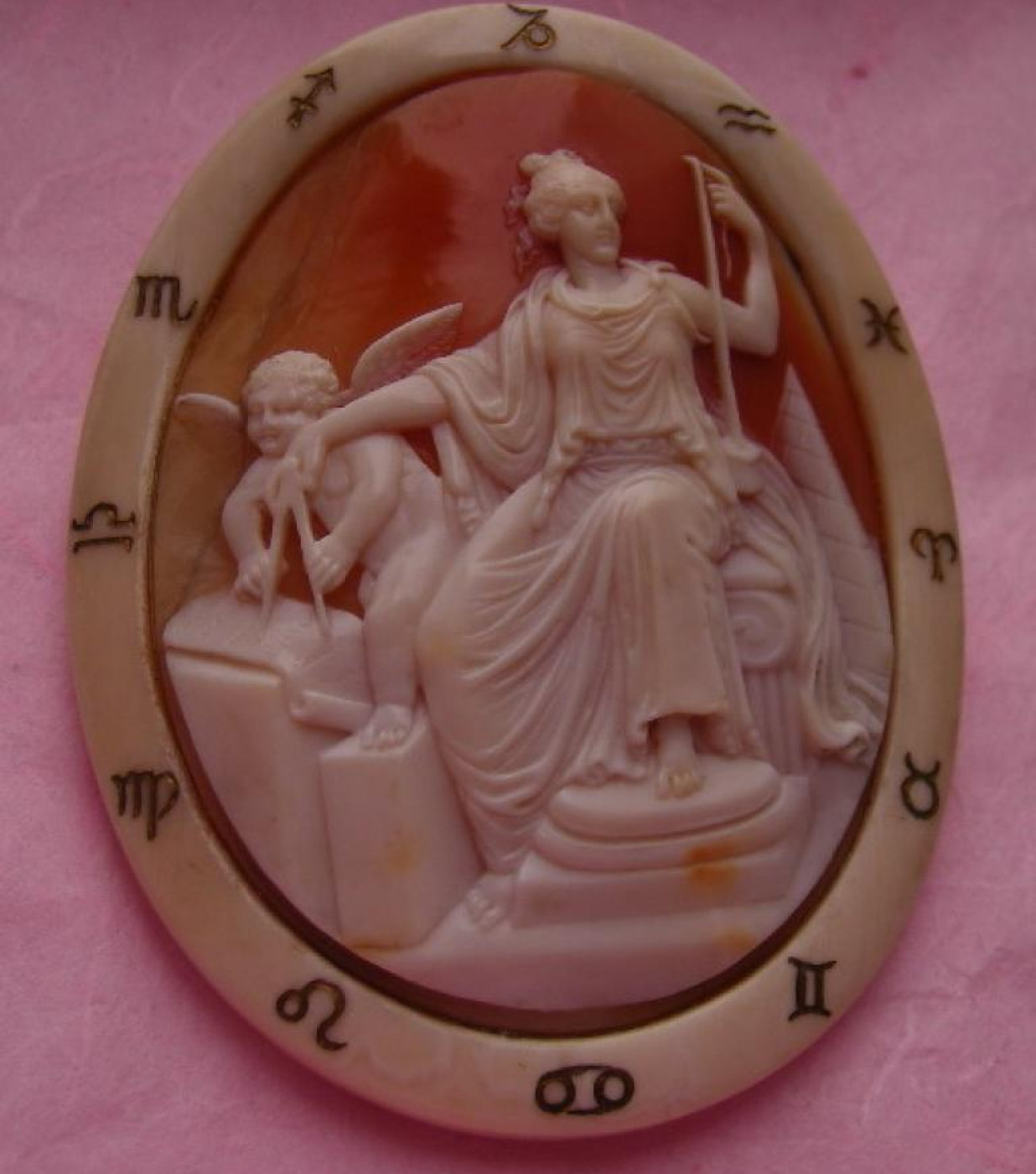 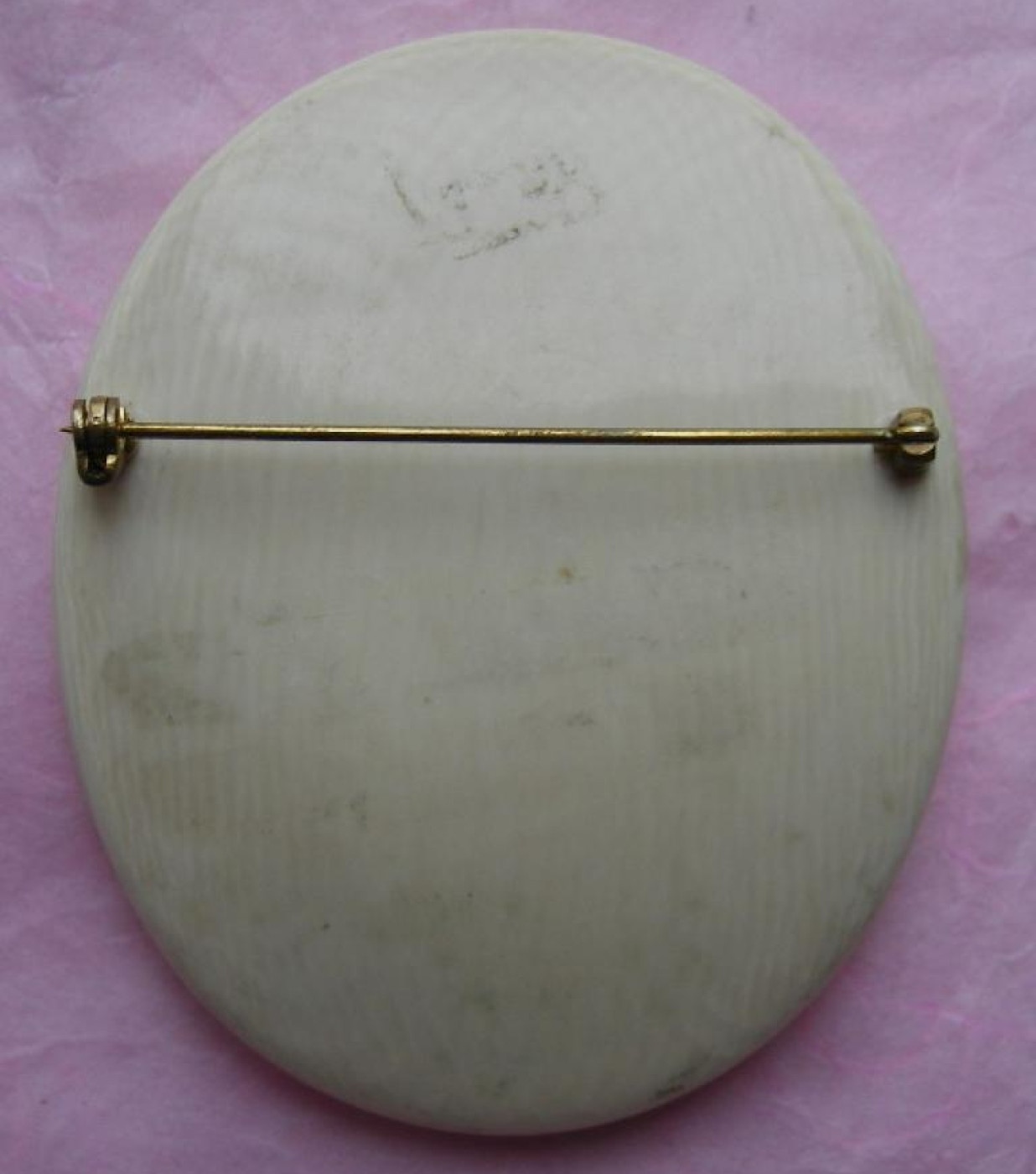 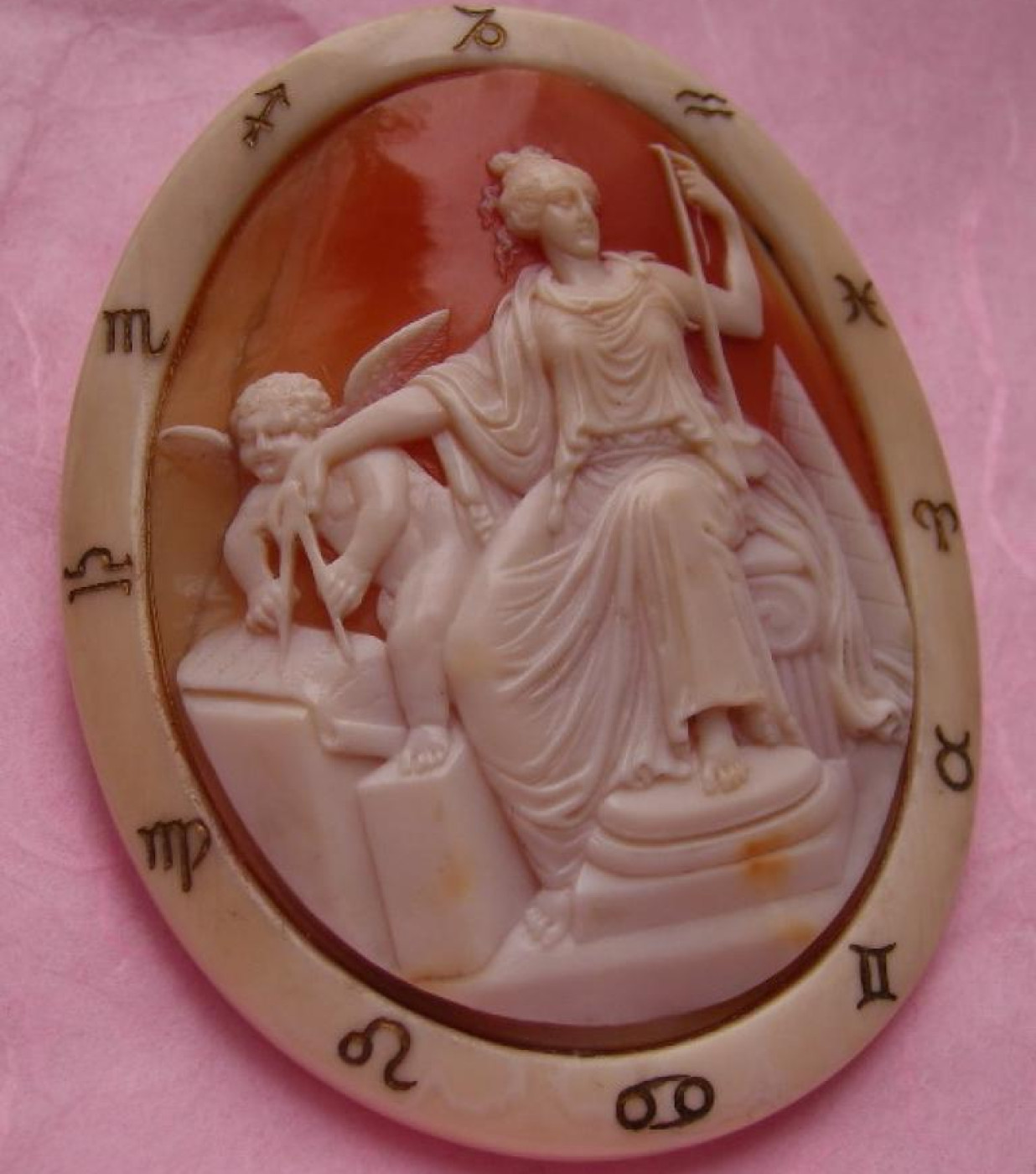 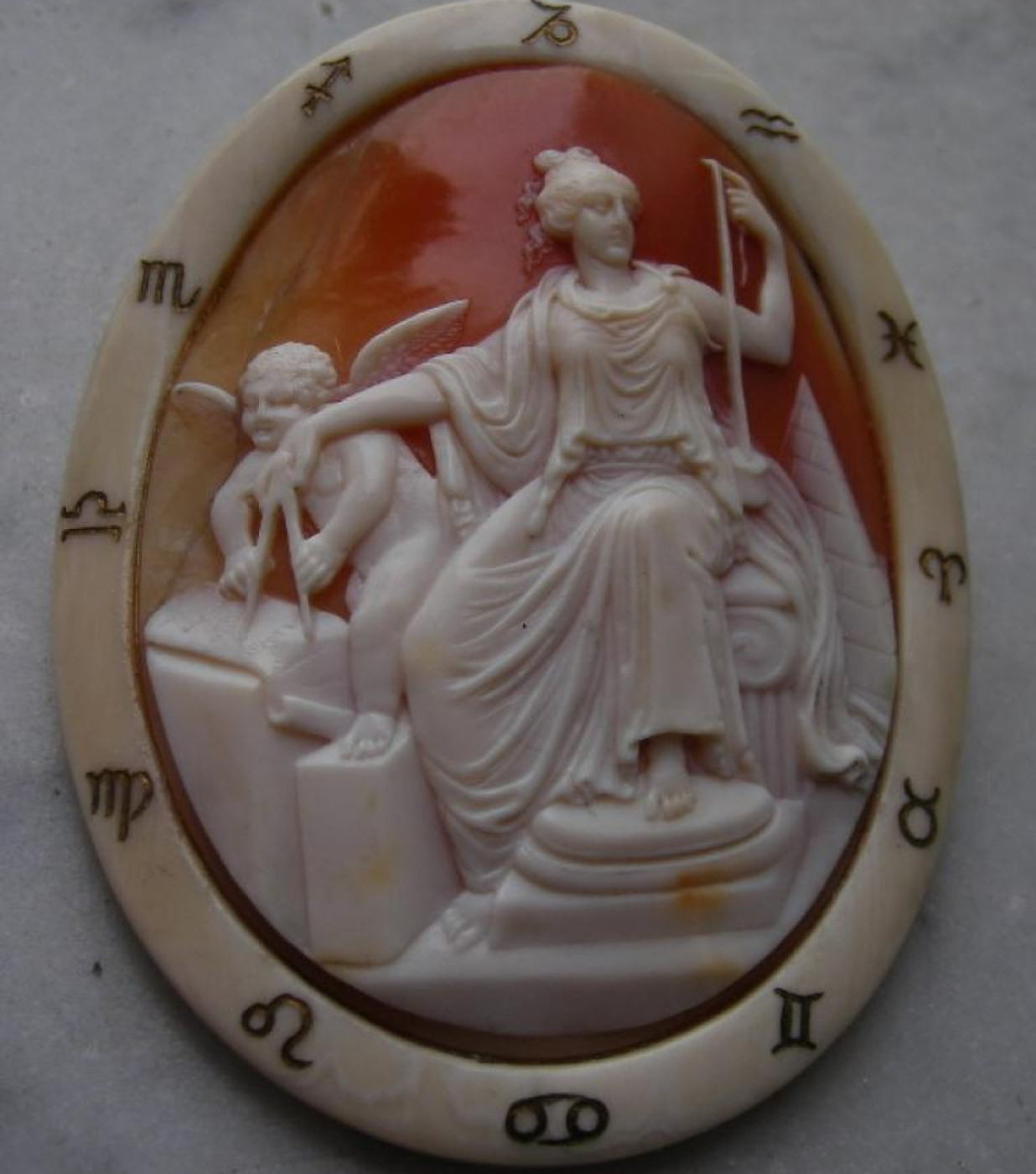 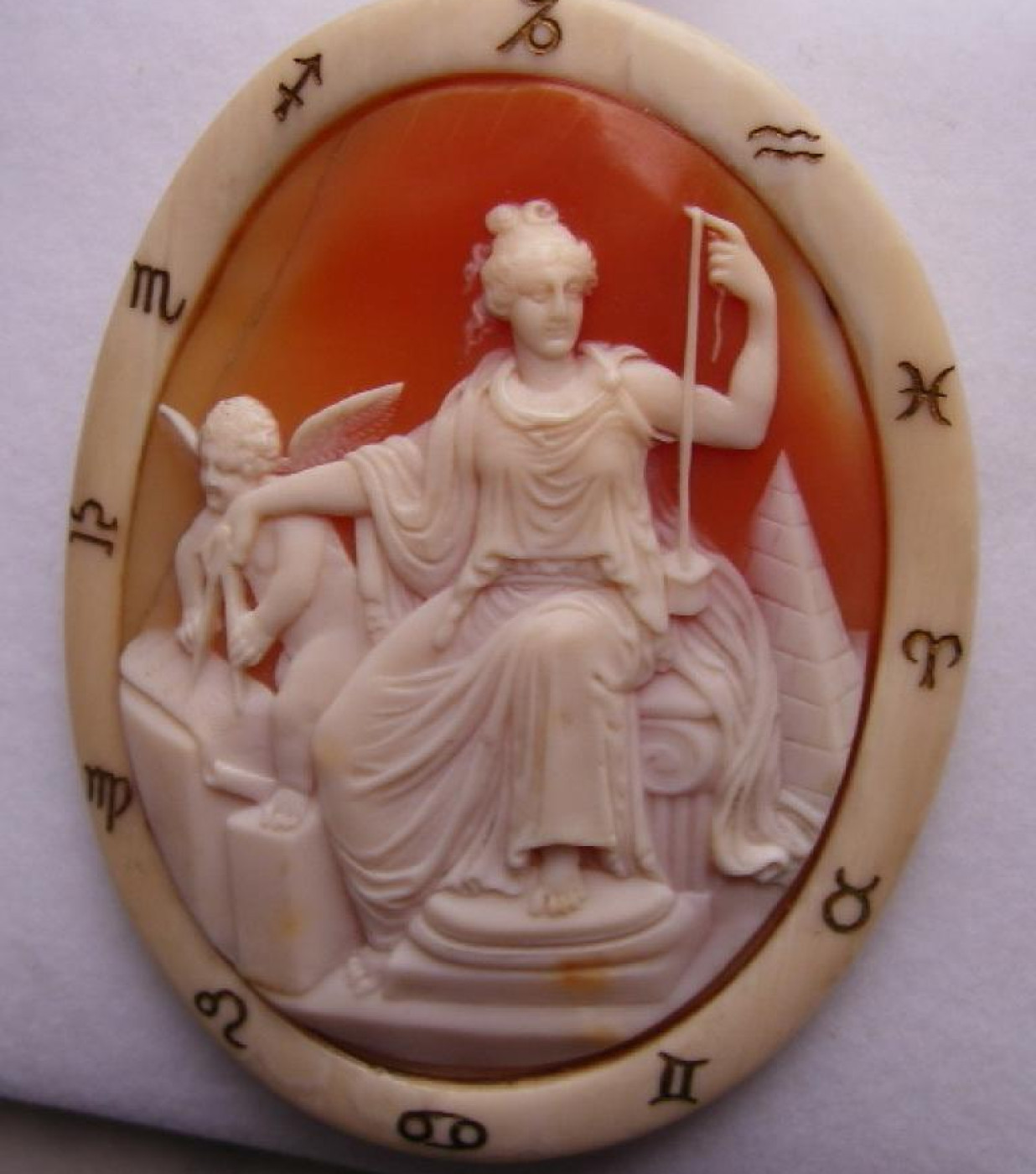 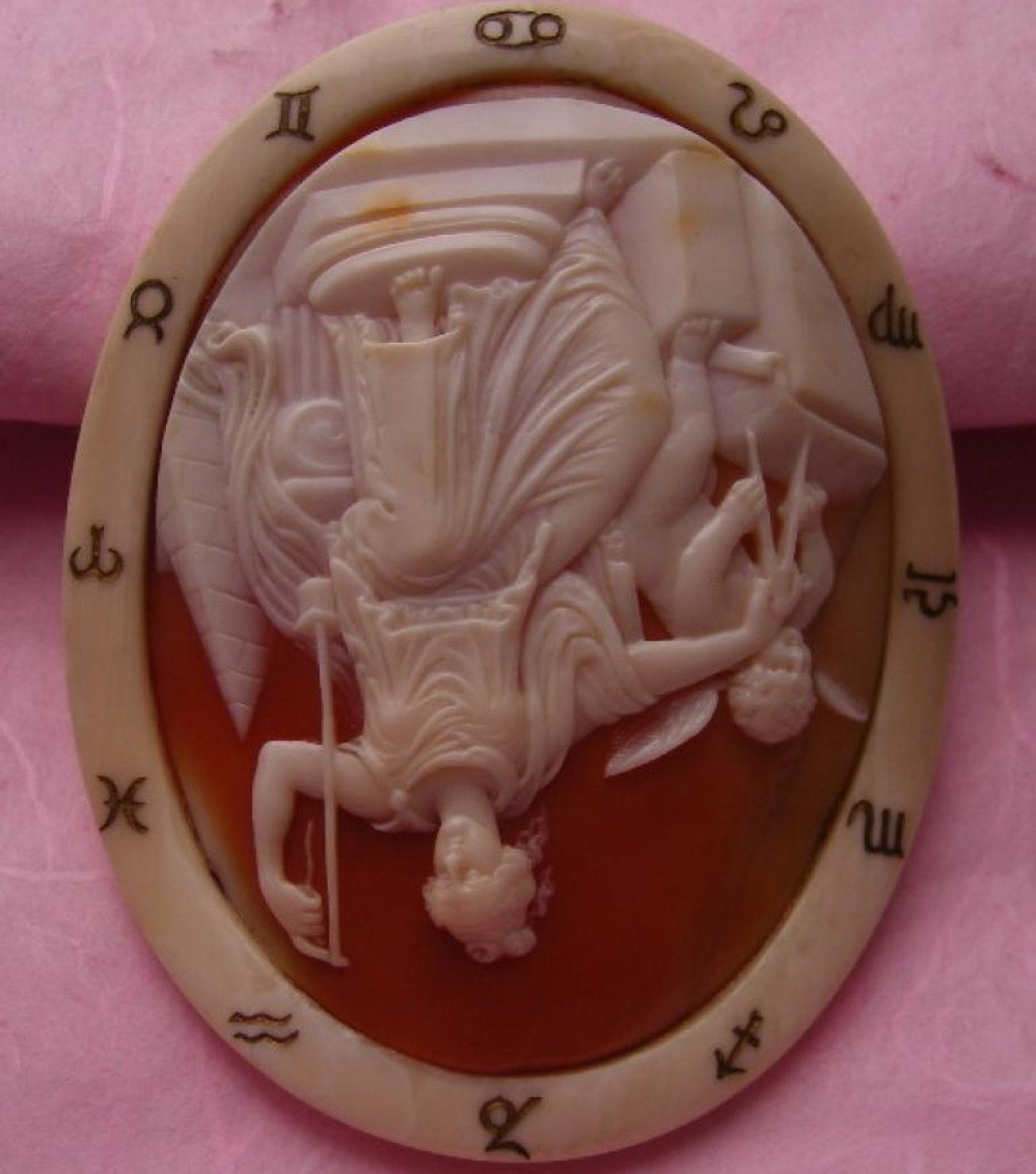 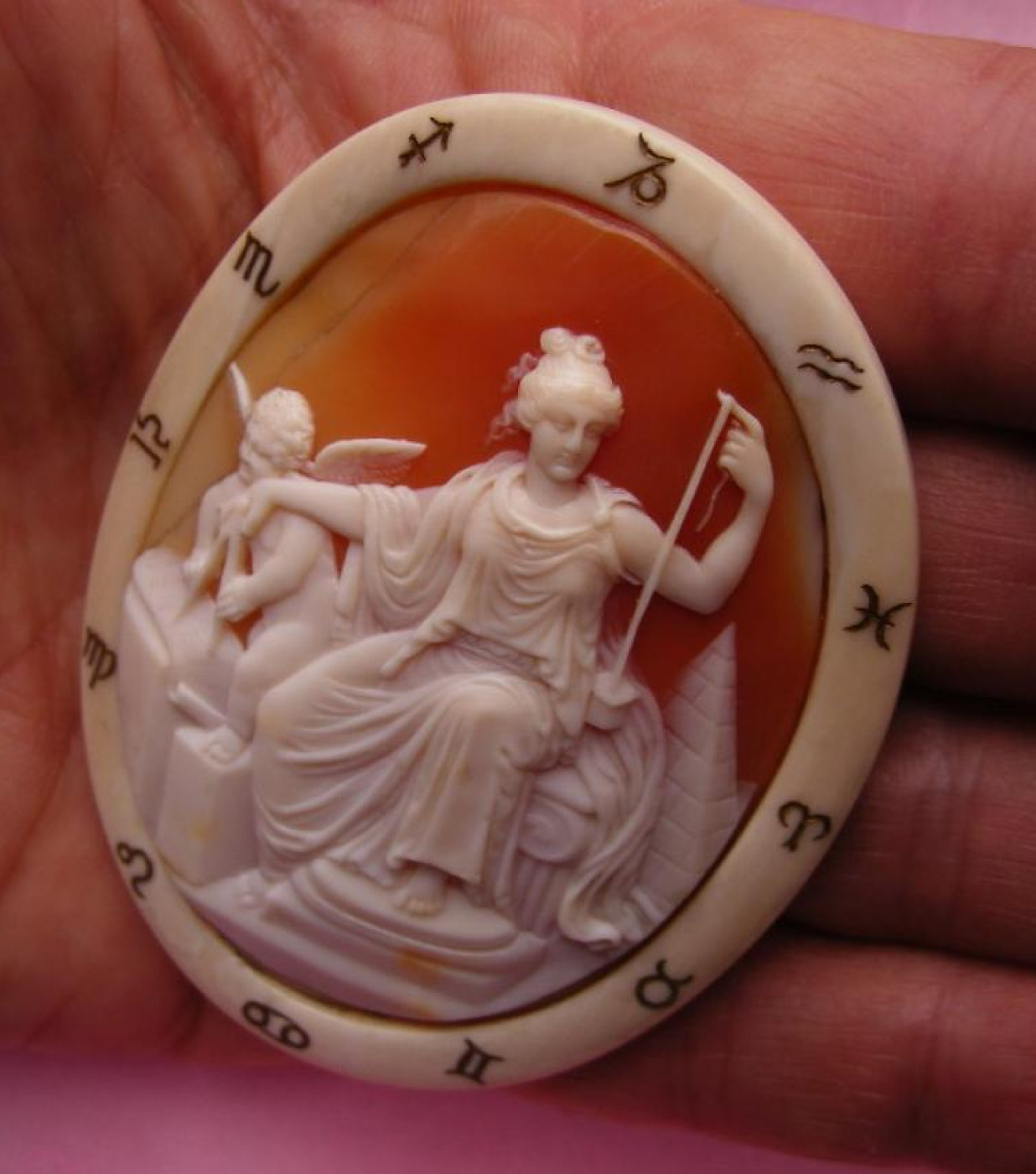 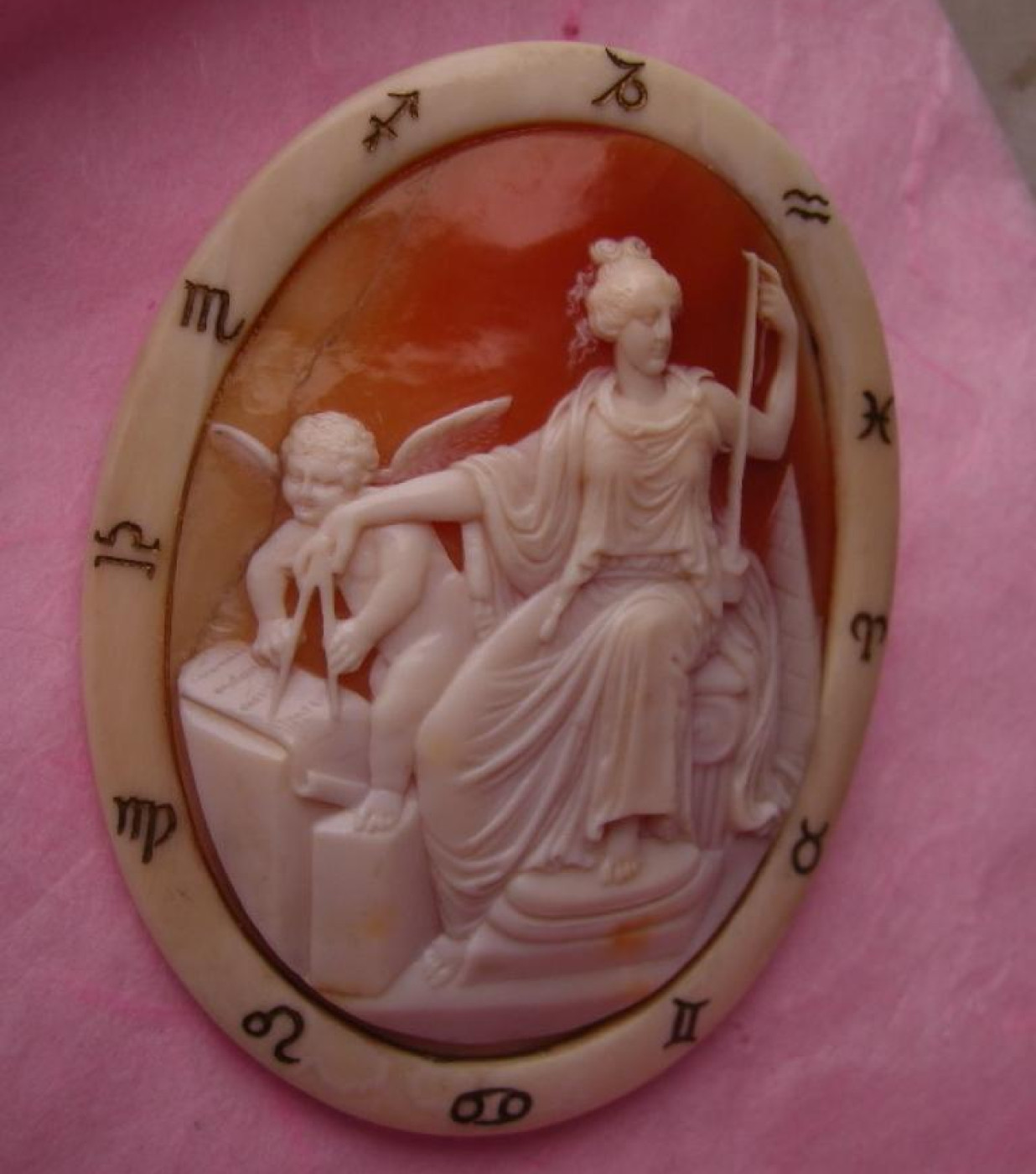 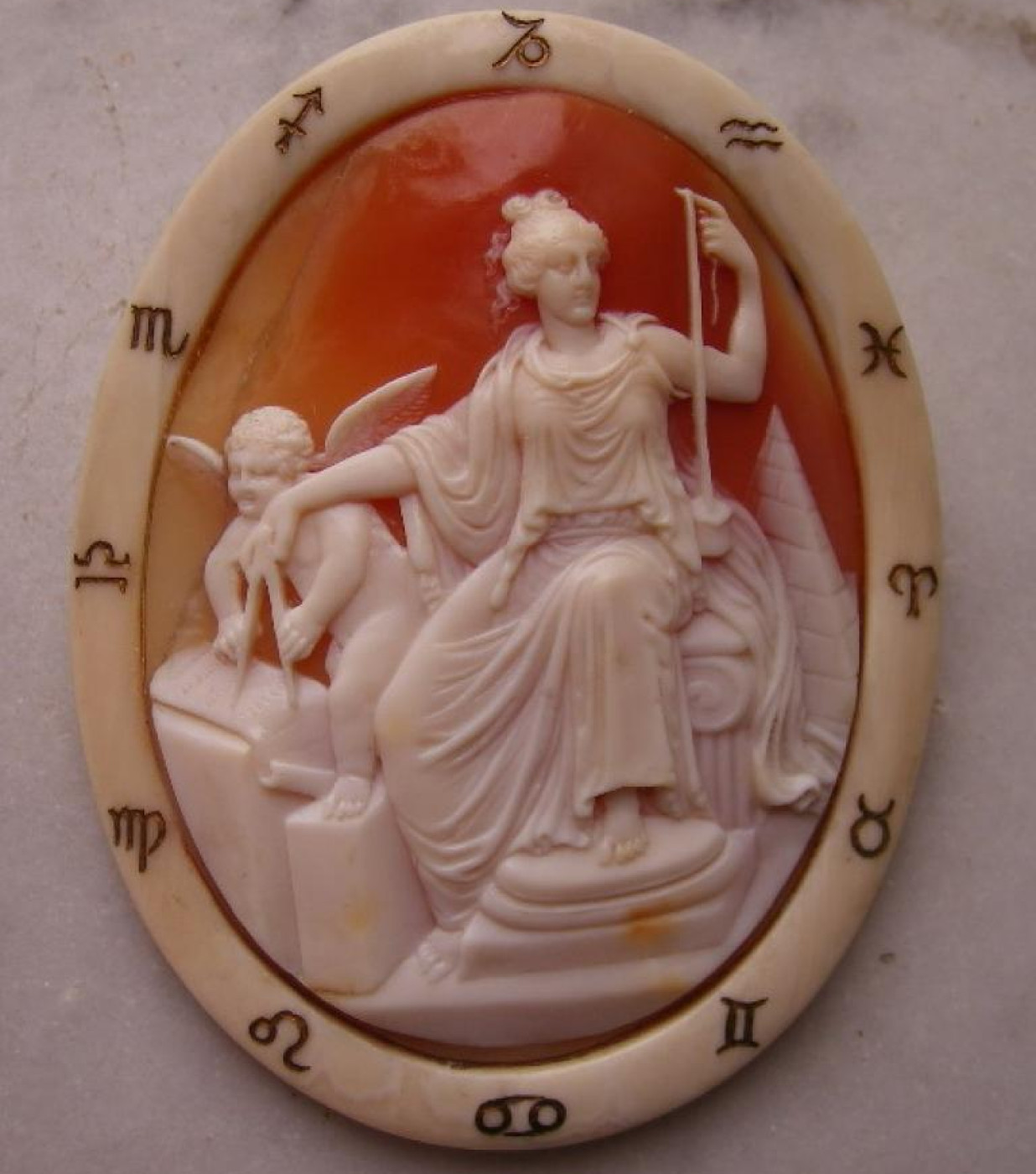 More than Museum Quality  cameo depicting Urania the muse of Astronomy and Astrology. A very very rare subject in a cameo. Have you ever seen anything of more beautiful? This cameo amazes me! Here Urania is portrayed in all of her beauty with one of her symbols, a staff to point the stars out. A cherub is helping her to determine the position of the stars with a compasses. Behind her there is a Pyramid, we know that the Egyptians were the best astronomers of the ancient era, so the building is a symbol of astronomy.  Look how the carver used the shell to evidence the details. The shell has a fantastic rich orange color, we can't find that color of shell today.  The cameo is fixed on an ivory base which makes as its frame too. On the frame there are all the symbols of the Zodiac signs, engraved and painted in gold. This cameo is after a miniature or painting by François Boucher, called The Allegory of the Arts and Sciences" and then reproduced as an enamel miniature by Fabergè on a egg he made for Catherine the Great, (see the detail below) Tsarina of Russia in the first years of 1800. This is a three dimensional cameo and in really excellent conditions for its age. One of most beautiful cameo I have ever seen, the pictures speak by themselves. This is another masterly carved cameo. A very desirable collectors piece, rare and museum quality cameo.

In Greek mythology, Urania , which means "heavenly", was the muse of astronomy and astrology. She is usually depicted as having a globe in her left hand and a peg or staff to point the stars in the right, her foot on a turtle, symbol of silence. She is able to foretell the future by the position of the stars. She is often associated with Universal Love and the Holy Spirit. She is dressed in a cloak embroidered with stars and keeps her eyes and attention focused on the Heavens. Those who are most concerned with philosophy and the heavens are dearest to her.