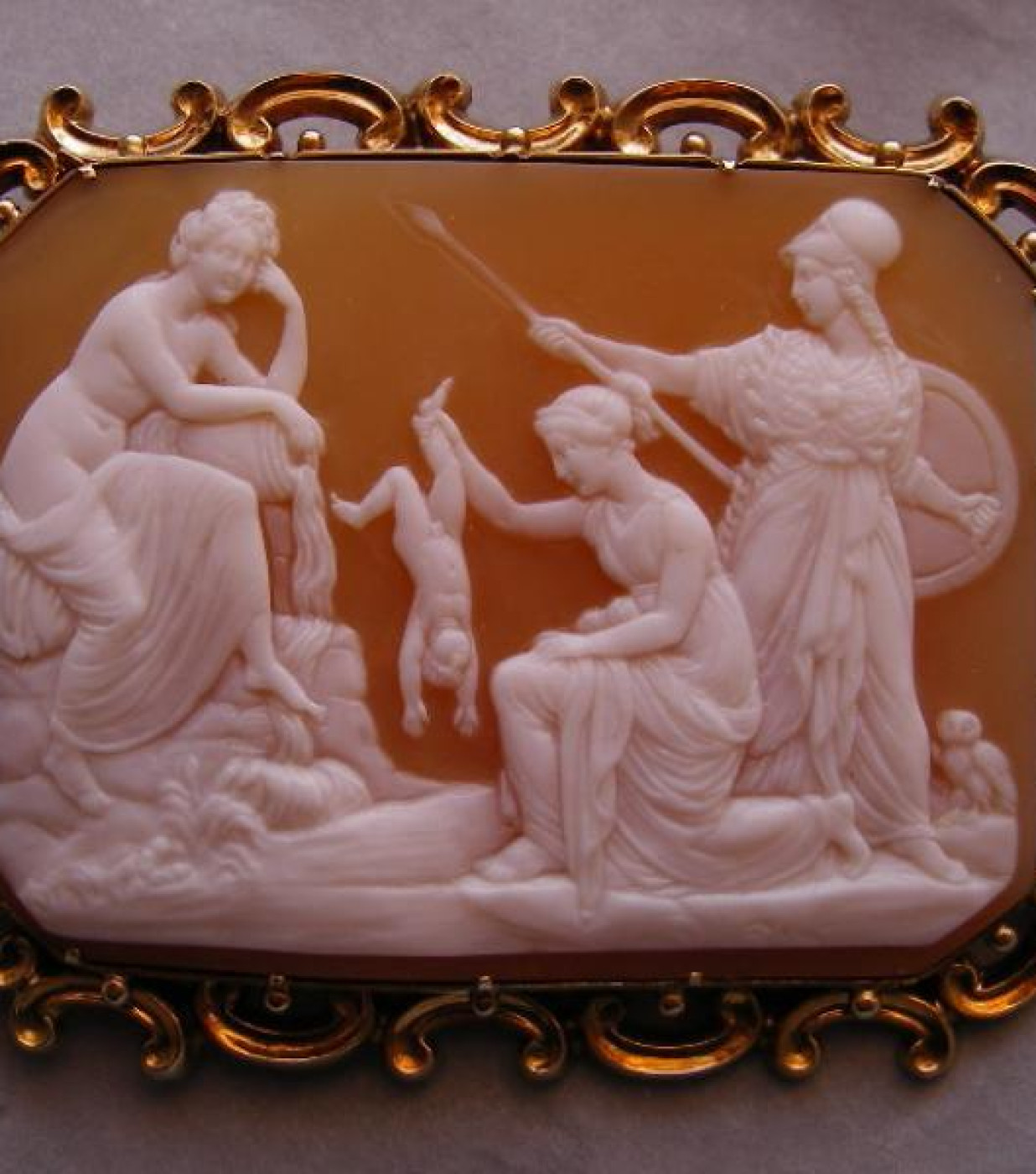 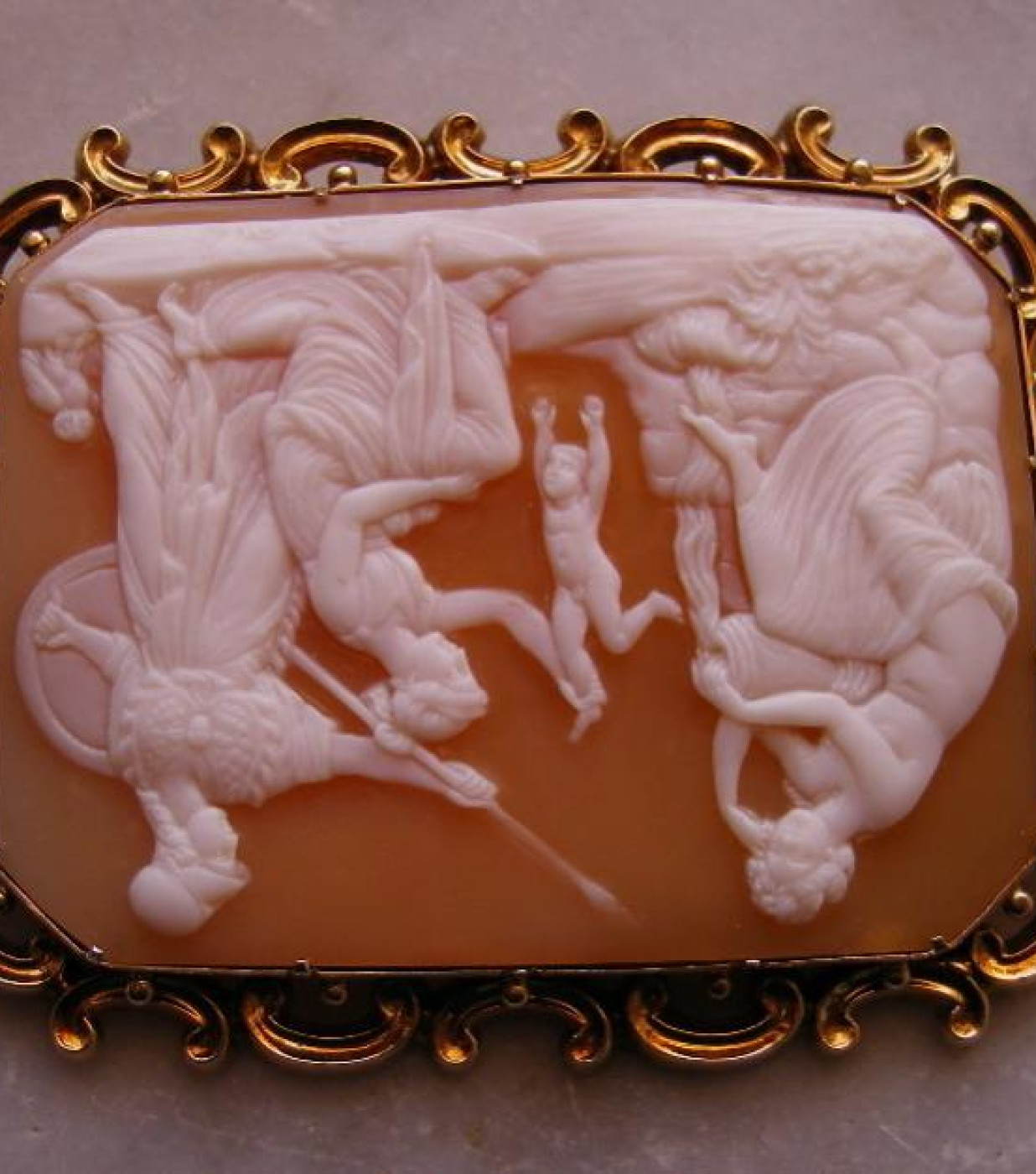 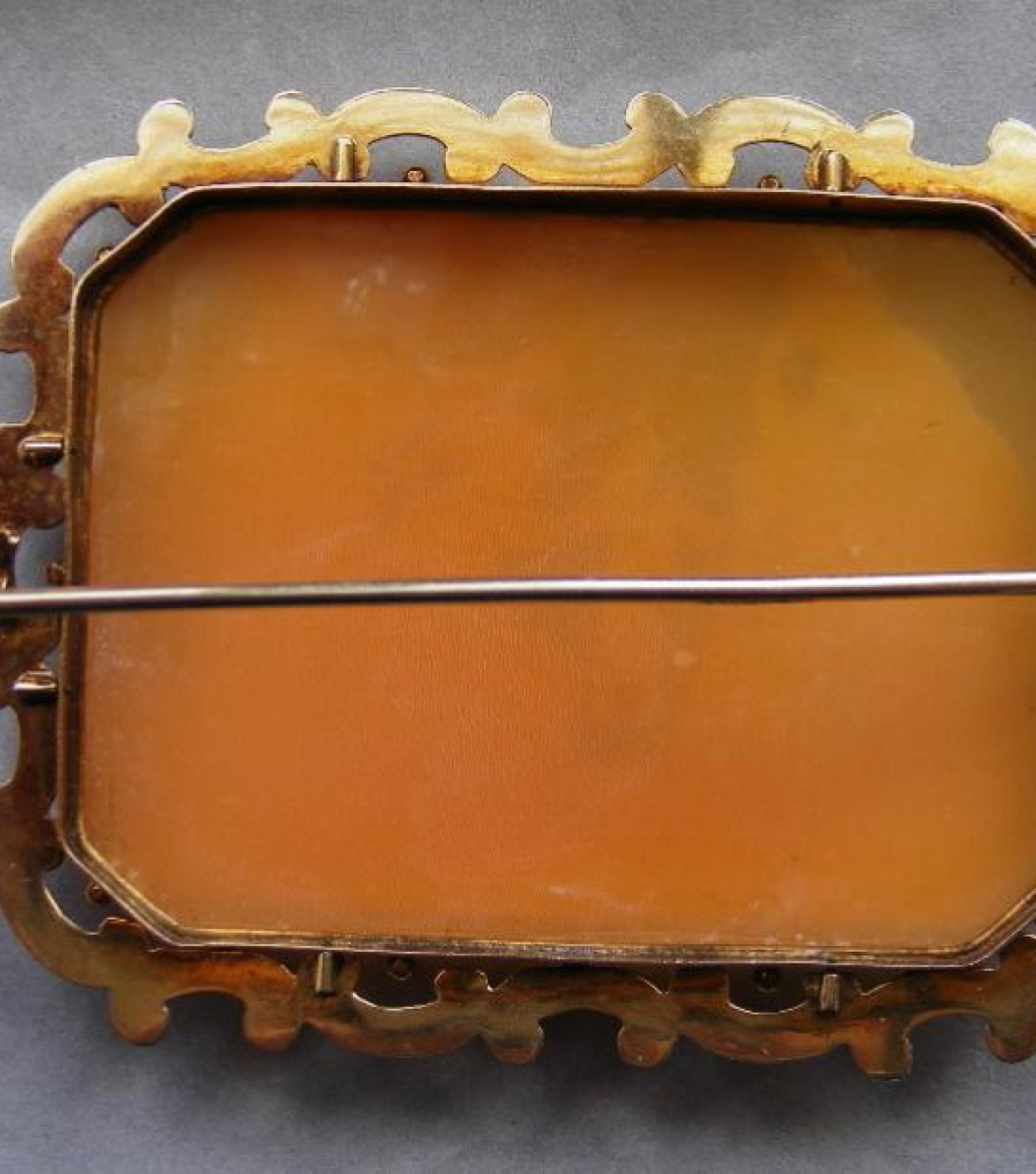 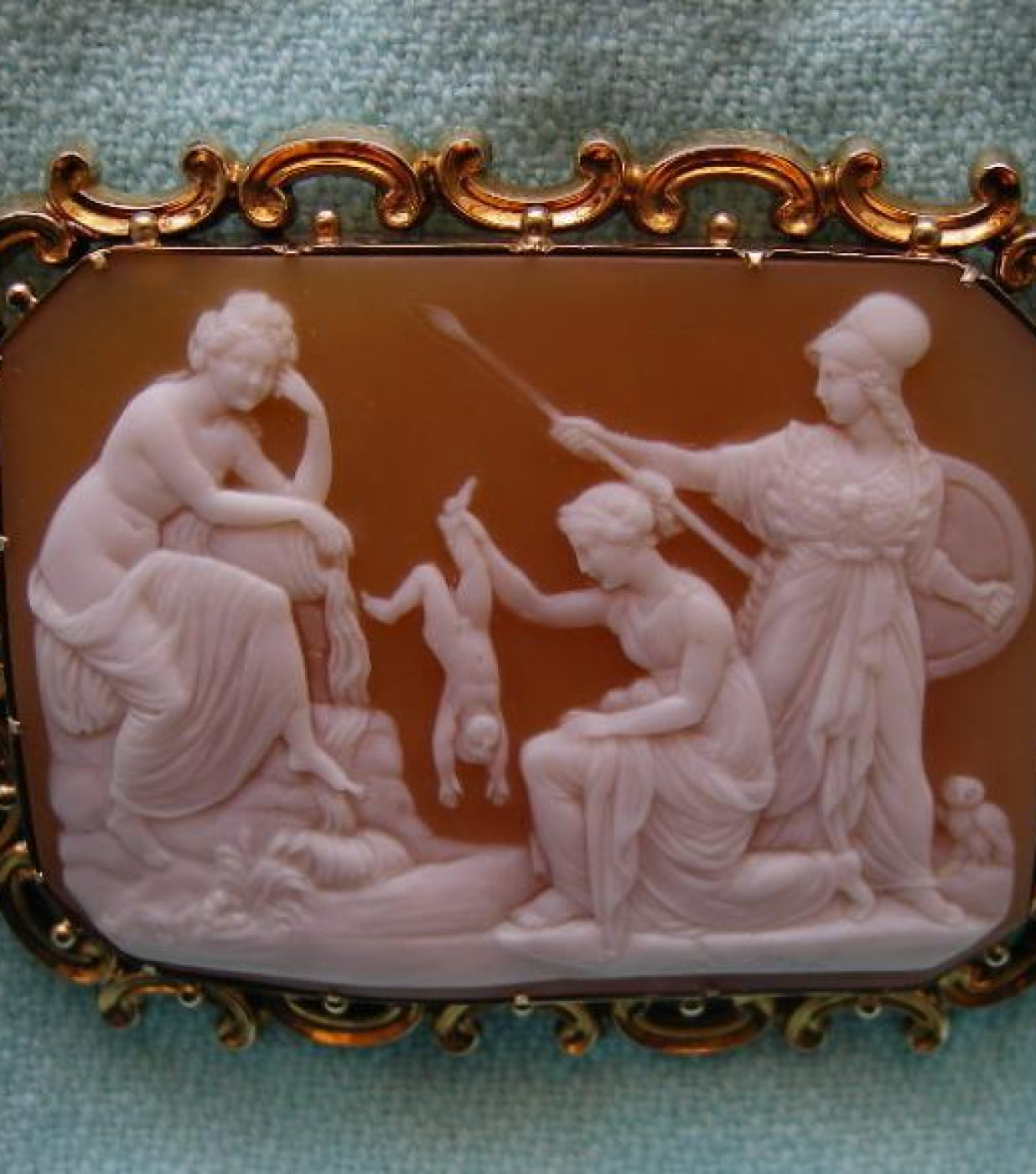 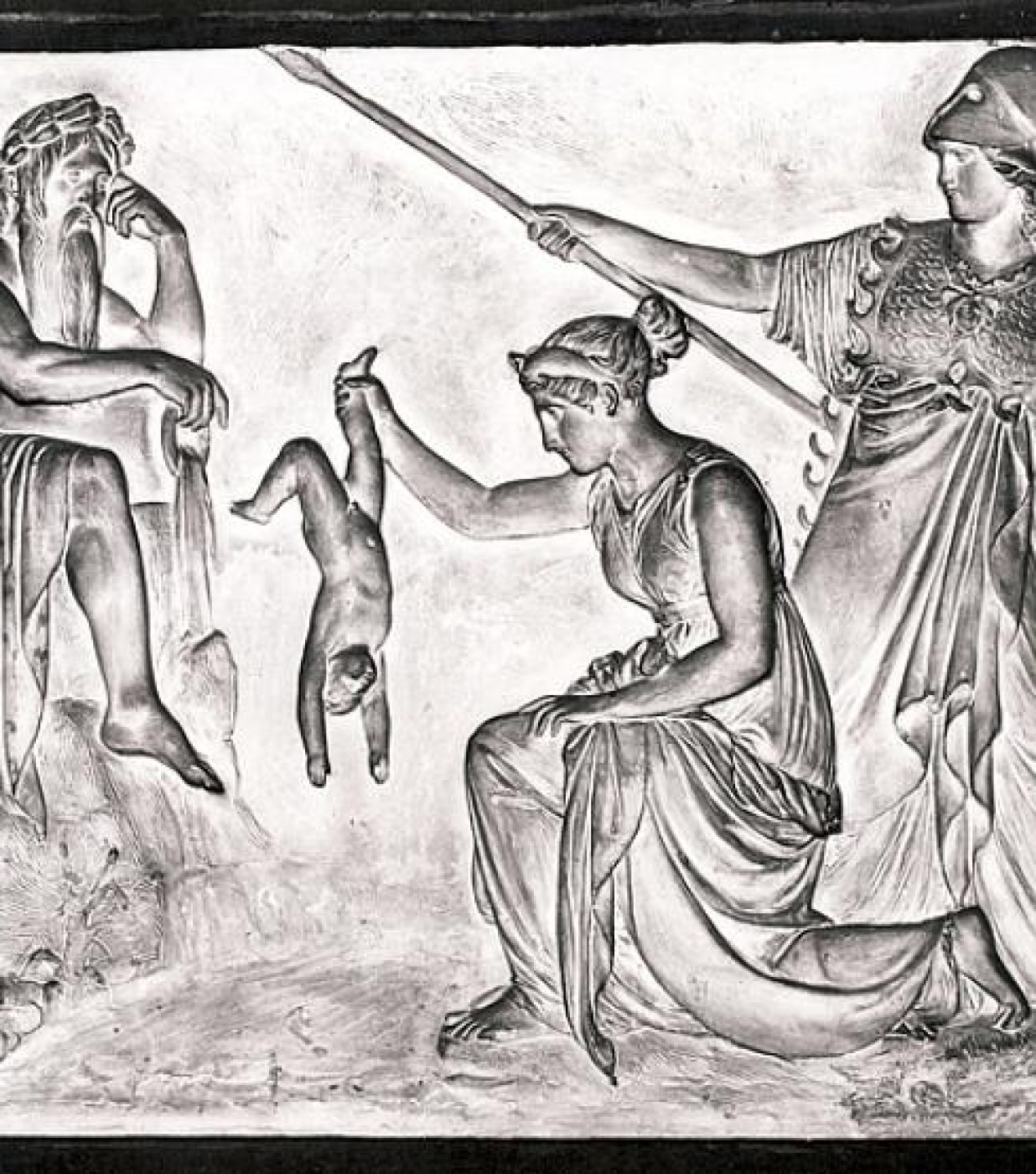 Museum Quality cameo depicting Thetis dipping Achilles in the river Styx. A very rare subject in a cameo. According to the myth, Achilles' mother, Thetis, had dipped the infant Achilles in the river Styx, holding onto him by his heel, and he became invulnerable where the waters touched him. In Greek mythology, the "River Styx"  was a river which formed the boundary between Earth and the Underworld (Hades). It circles Hades nine times. The rivers Styx, Phlegethon, Acheron and Cocytus all converge at the center of Hades on a great marsh. The other important rivers of Hades are Lethe and Eridanos. Styx was guarded by Phlegyas, who passes the souls from one side to another of the river. Sometimes the ferryman was called Charon. This cameo is after a bas relief from Thorvaldsen of 1837 now in the Thorvaldsen Museum of Copenhagen. In the Thorvaldsen bas-relief, the God Ocean is depicted sitting on a rock while he gives water to the River Styx, instead in the cameo is depicted ones of the daughter of the God Ocean, exactly the goddess nymph Styx. All the carving in this cameo is an artwork due to the skill of the carver. The gorgeous gold frame completes the beauty of this cameo. This is with no doubt one of most beautiful and rare I have ever handled, the pictures speak by themselves. This is another masterly carved cameo. A very desirable collectors piece, rare and museum quality cameo.
A bit of History:

In Greek mythology, Achilles was a Greek hero of the Trojan War, the central character and the greatest warrior of Homer's Iliad. Achilles also has the attributes of being the most handsome of the heroes assembled against Troy, as well as the best. Later legends (beginning with a poem by Statius in the first century AD) state that Achillies was invulnerable in all of his body except for his heel. Legend states that Achilles was semi-immortal, however his heel was vulnerable. Since he died due to a poisoned arrow shot into his heel, the "Achilles' heel" has come to mean a person's principal weakness. Achilles was the son of the nymph Thetis and Peleus, the king of the Myrmidons. Zeus and Poseidon had been rivals for the hand of Thetis until Prometheus, the fire-bringer, warned Zeus of a prophecy that Thetis would bear a son greater than his father. For this reason, the two gods withdrew their pursuit, and had her wed Peleus. As with most mythology there is a tale which offers an alternative version of these events: in Argonautica (iv.760) Hera alludes to Thetis's chaste resistance to the advances of Zeus, that Thetis was so loyal to Hera's marriage bond that she coolly rejected him.
Tethys also had other daughters with the great, earth-encircling, fresh-water stream Okeanos and they were:
The Okeanides (or Oceanides) were three thousand goddess Nymphs who presided over the sources of earth's fresh-water, ranging from rainclouds to subterranean springs and fountains. Their numbers included the Nephelai (Cloud-Nymphs), Aurai (Breeze-Nymphs), Naiades (Spring and Fountain Nymphs), Leimonides (Pasture Nymphs), and Anthousai (Flower Nymphs). The eldest among them were numbered among the Titanides - Styx, Dione, Neda, Metis, Klymene, Eurynome, Doris, Elektra, and Pleione.