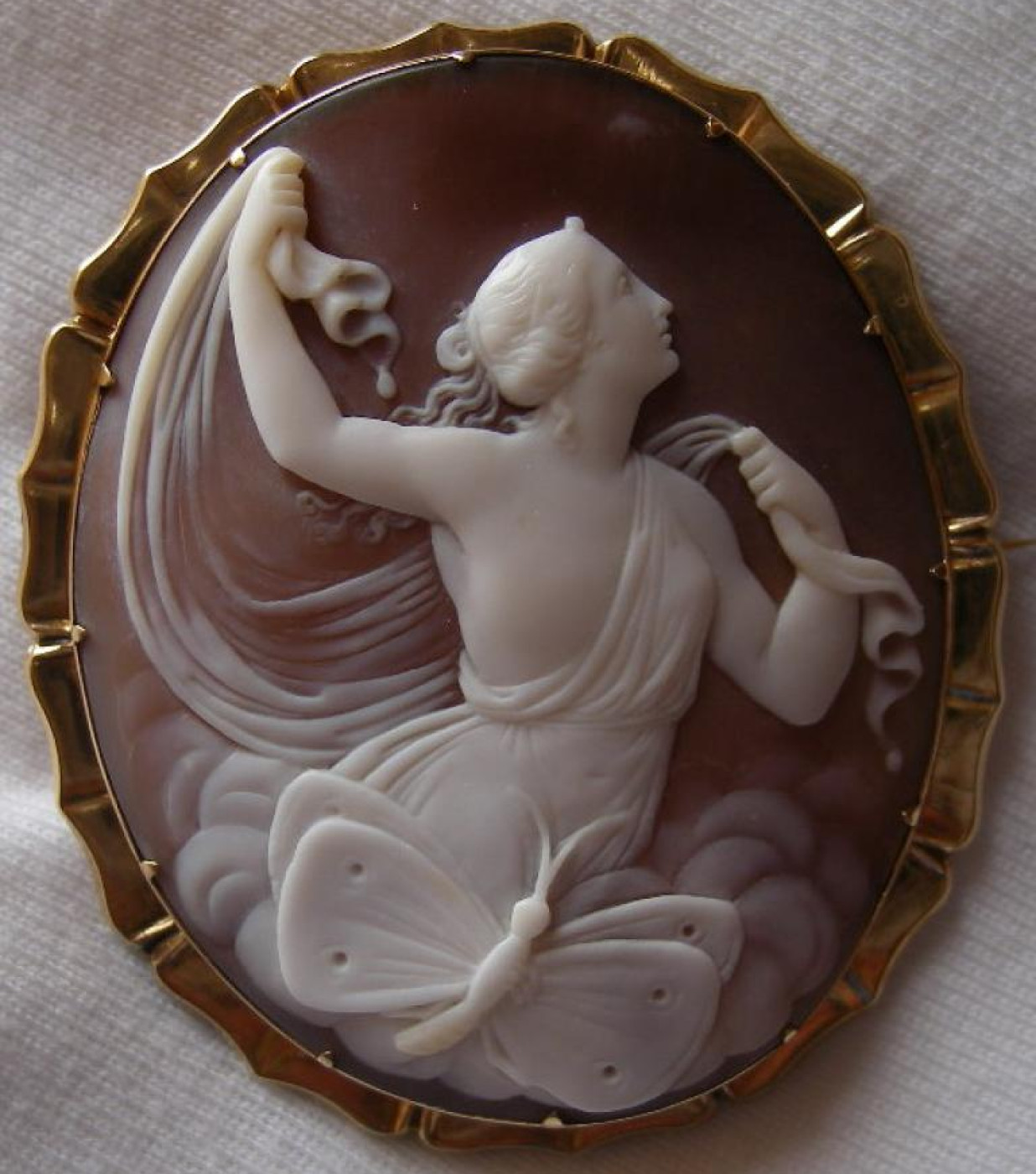 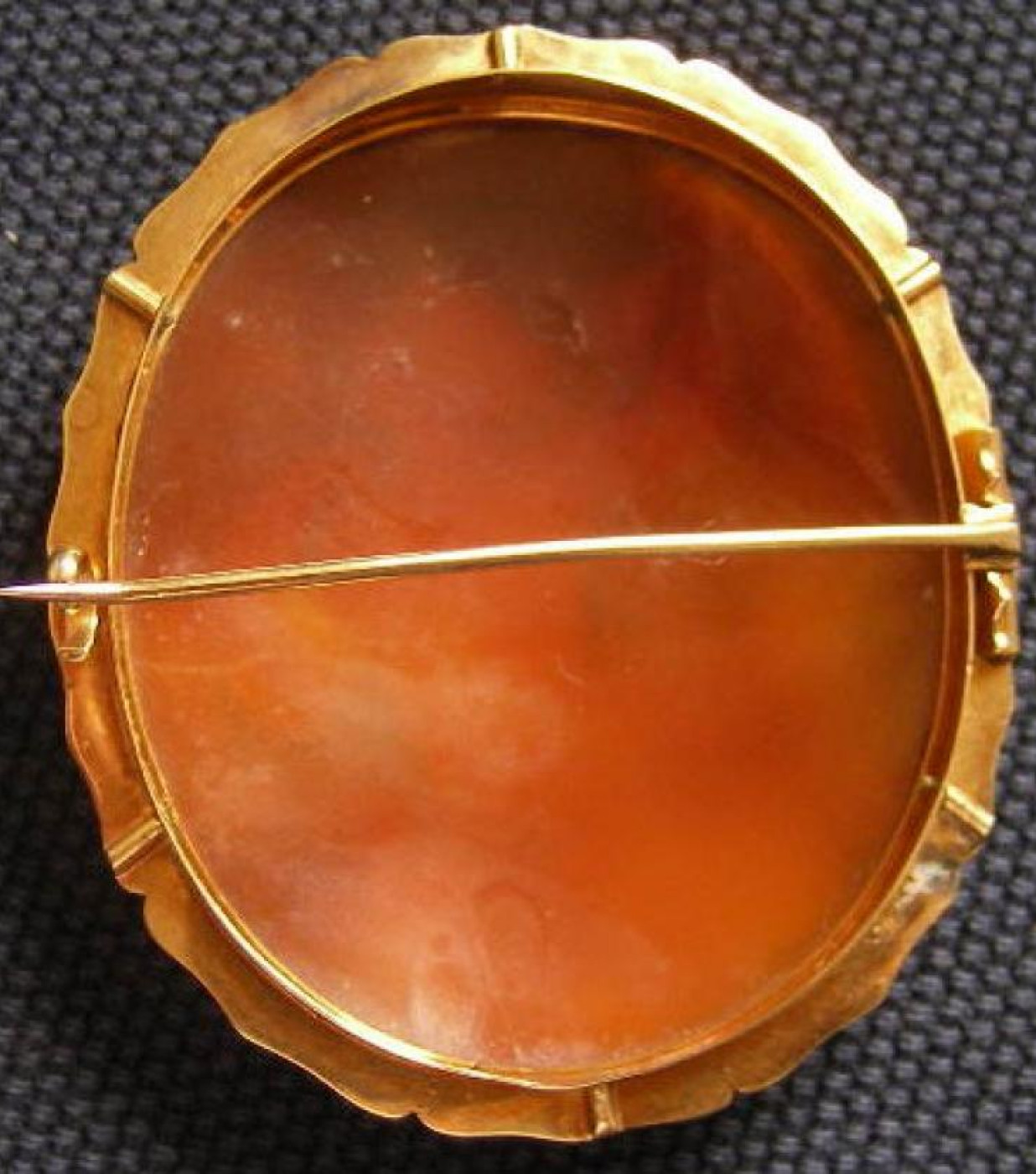 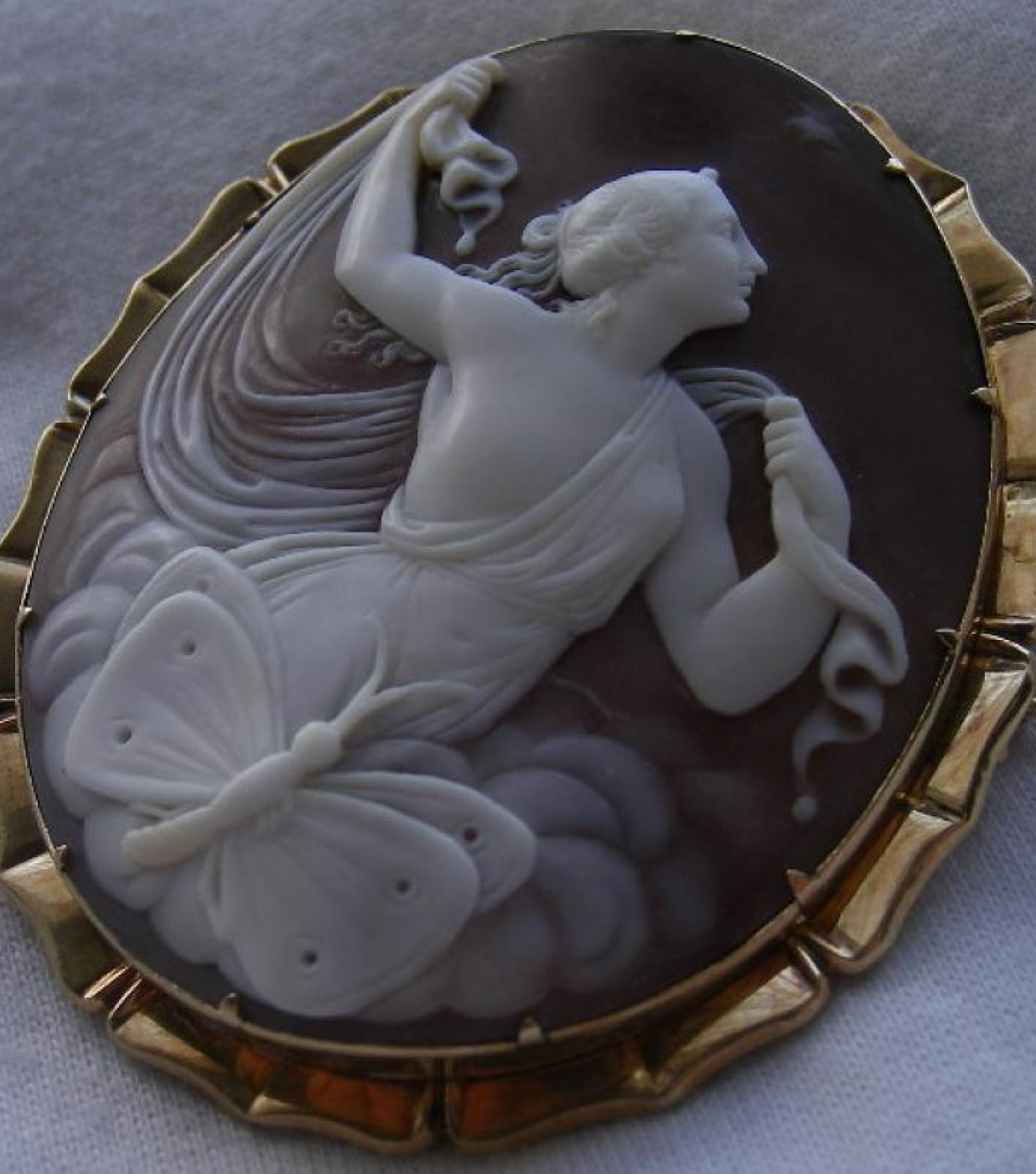 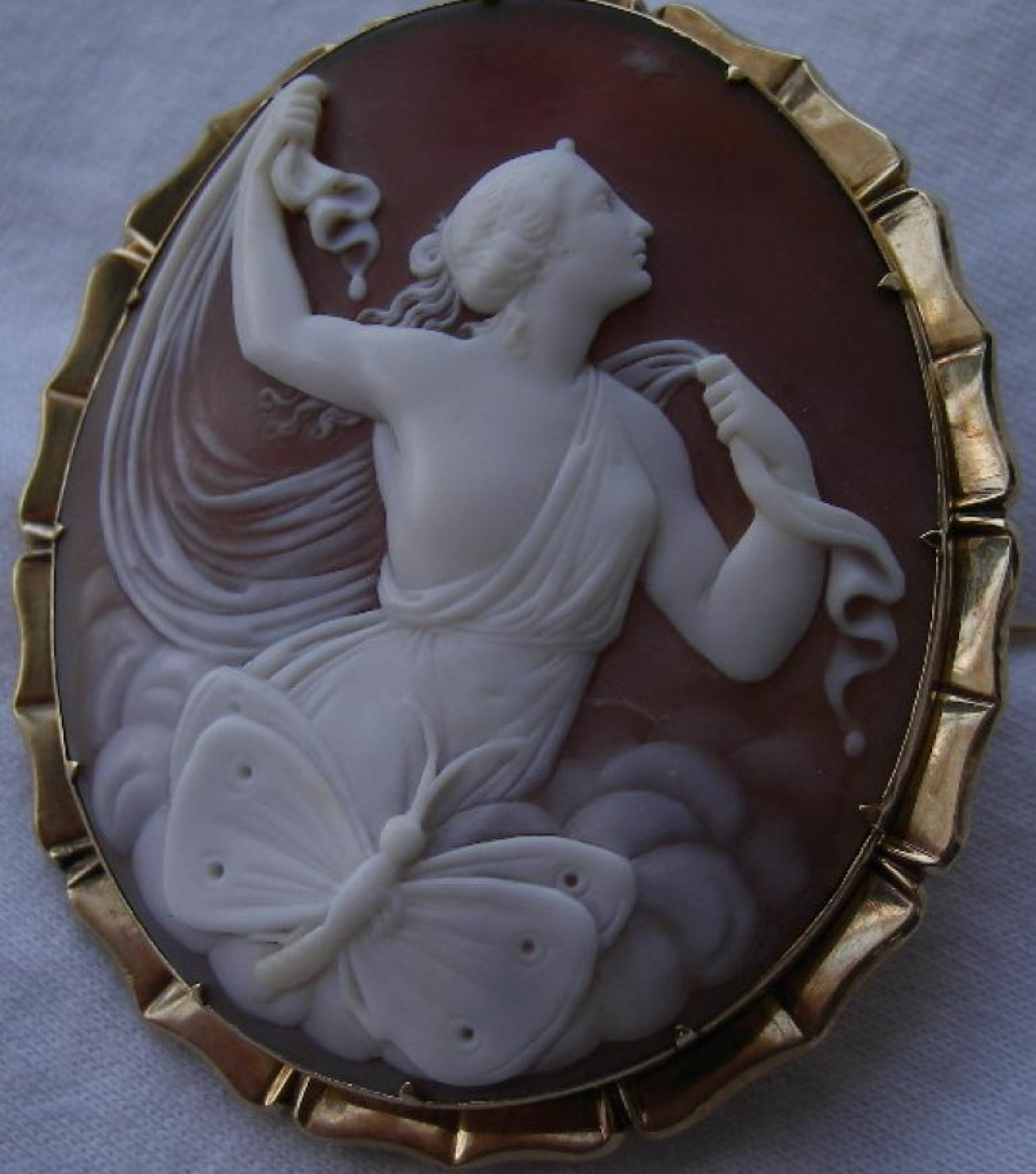 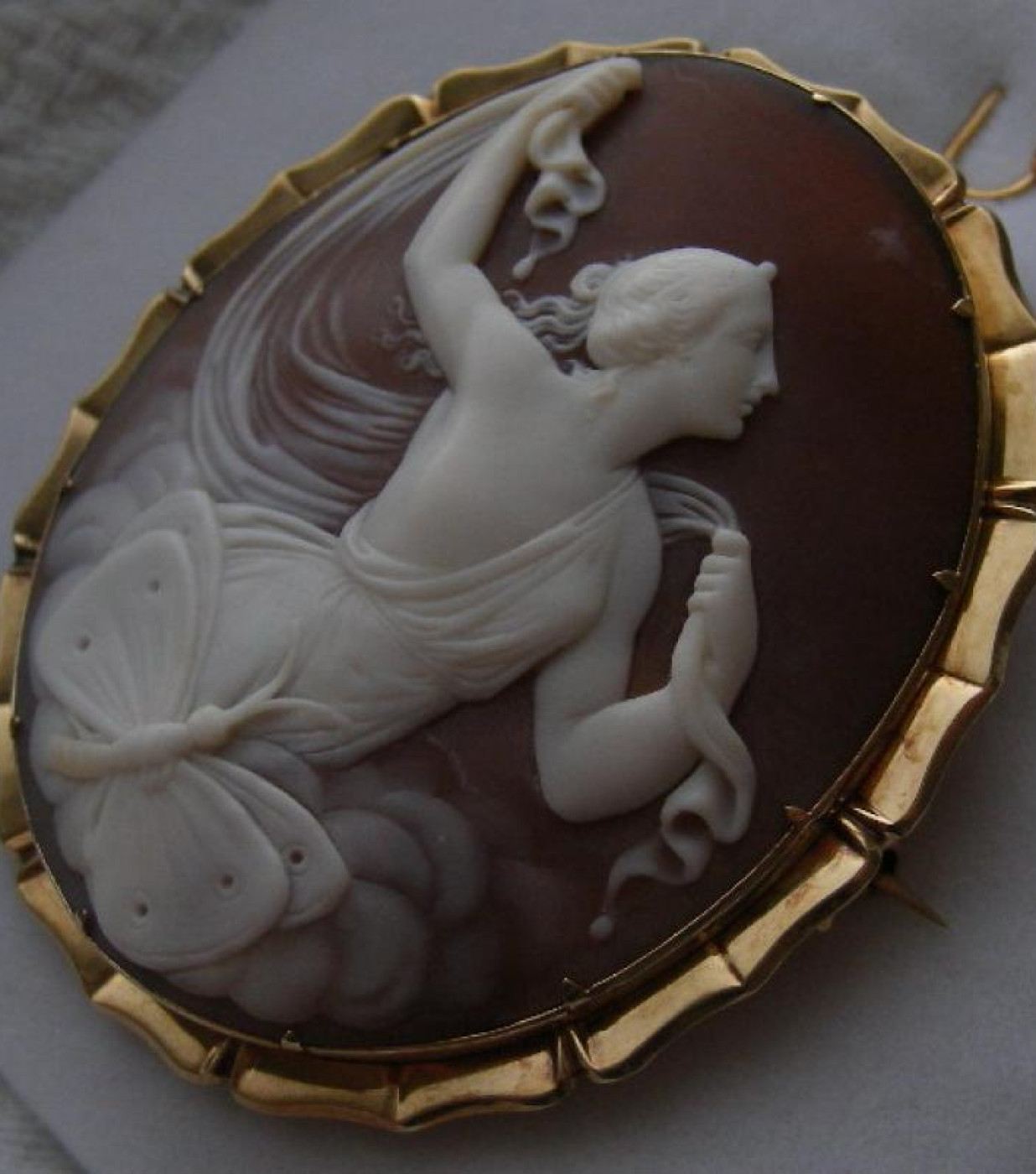 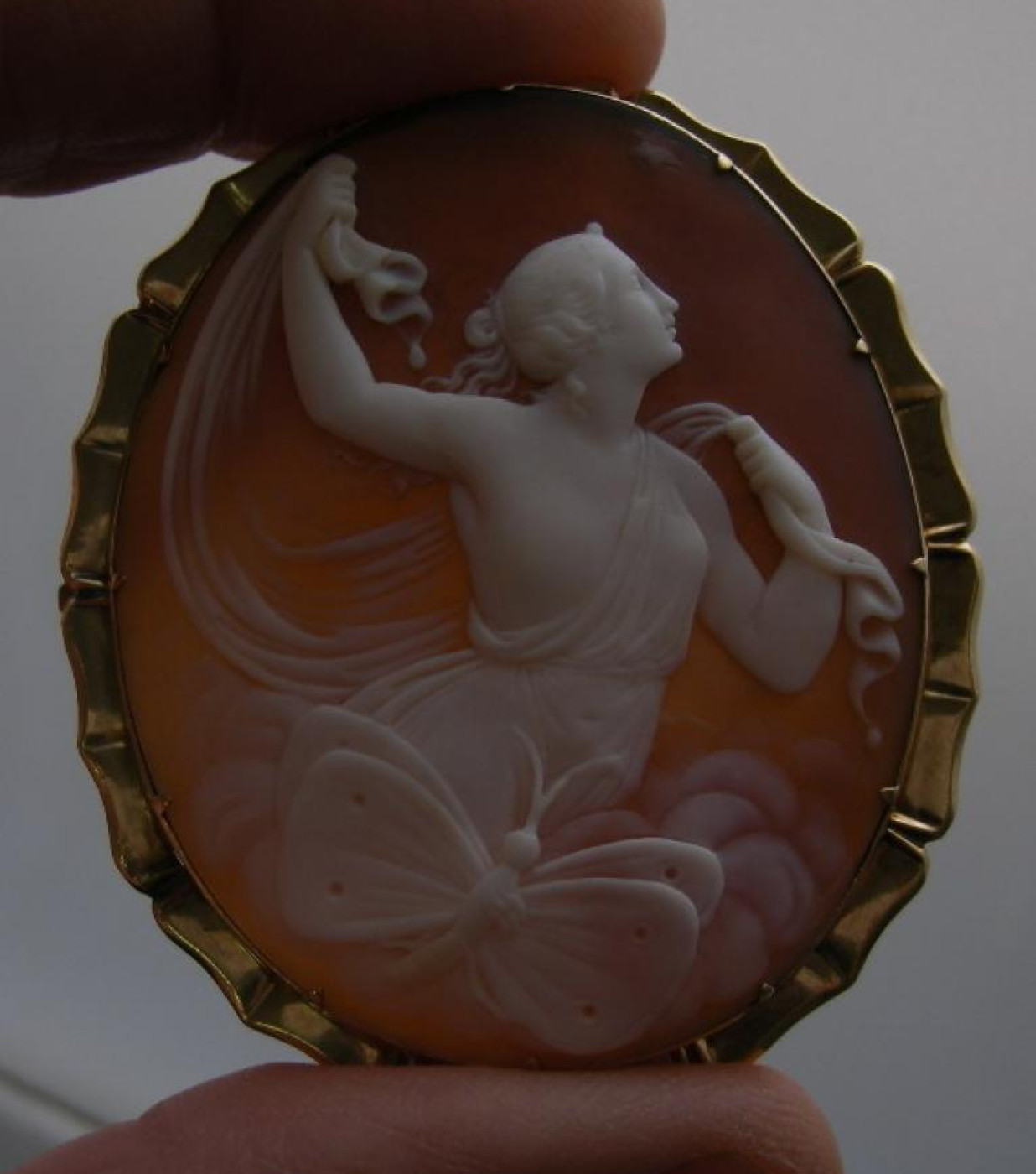 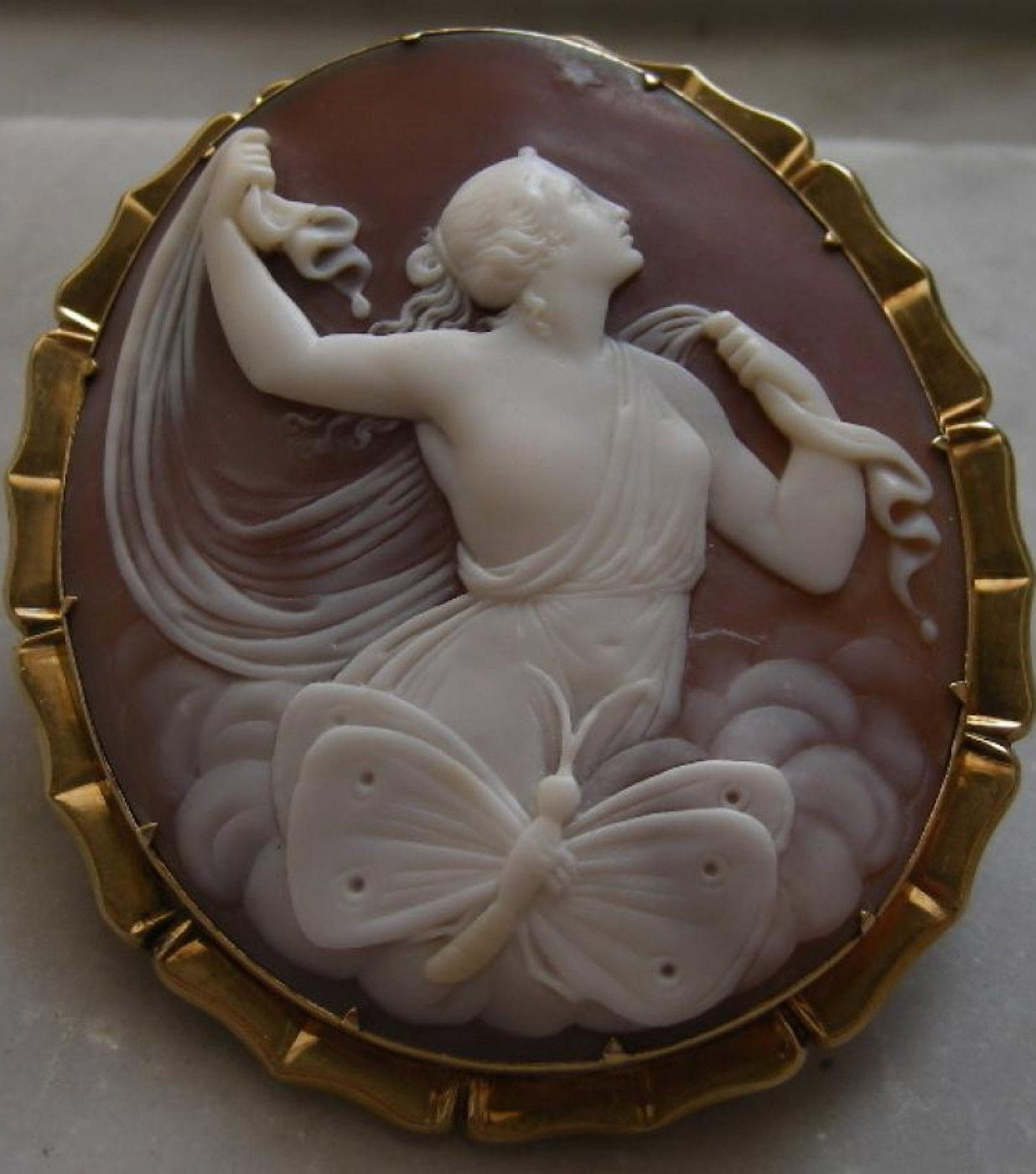 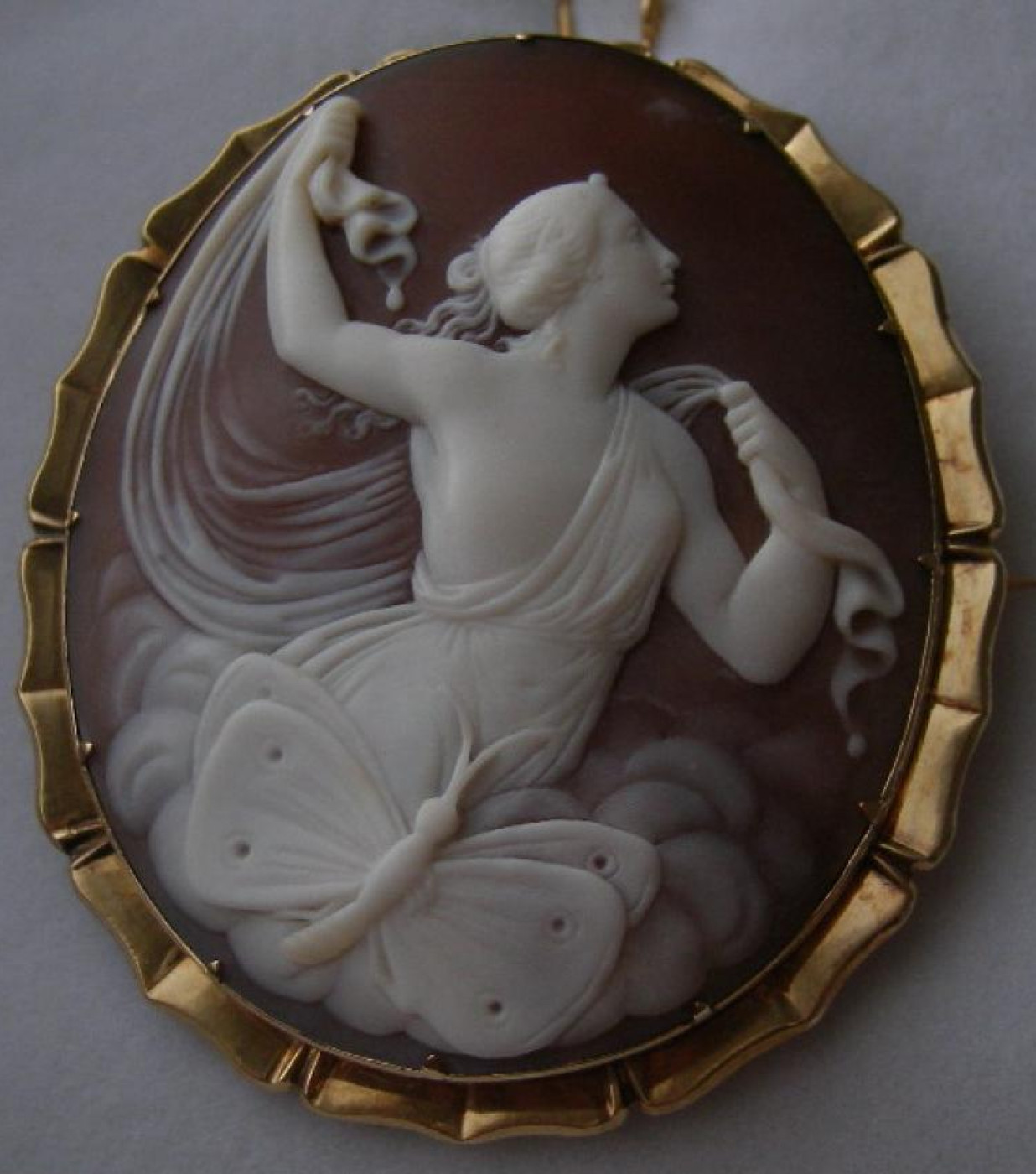 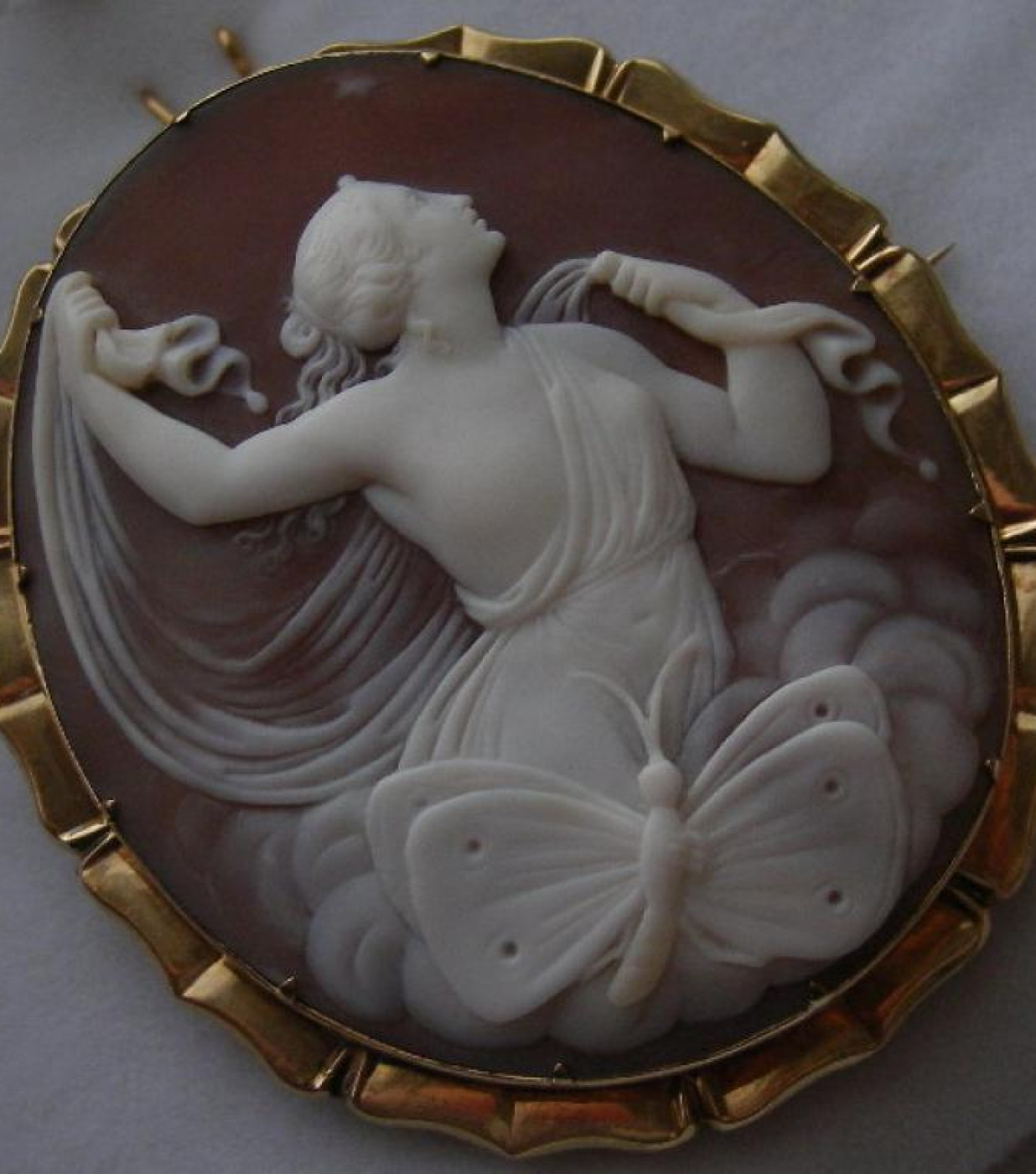 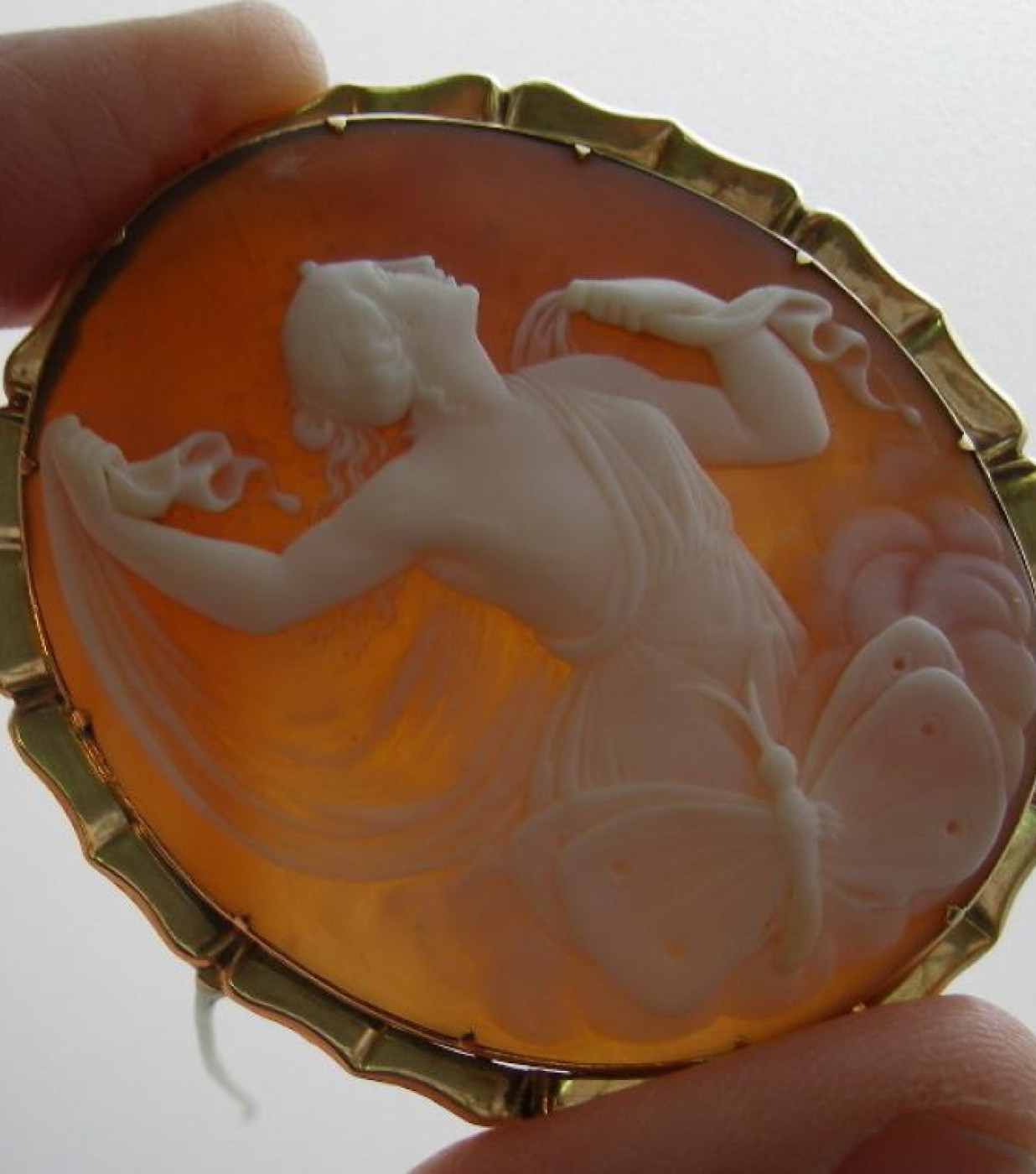 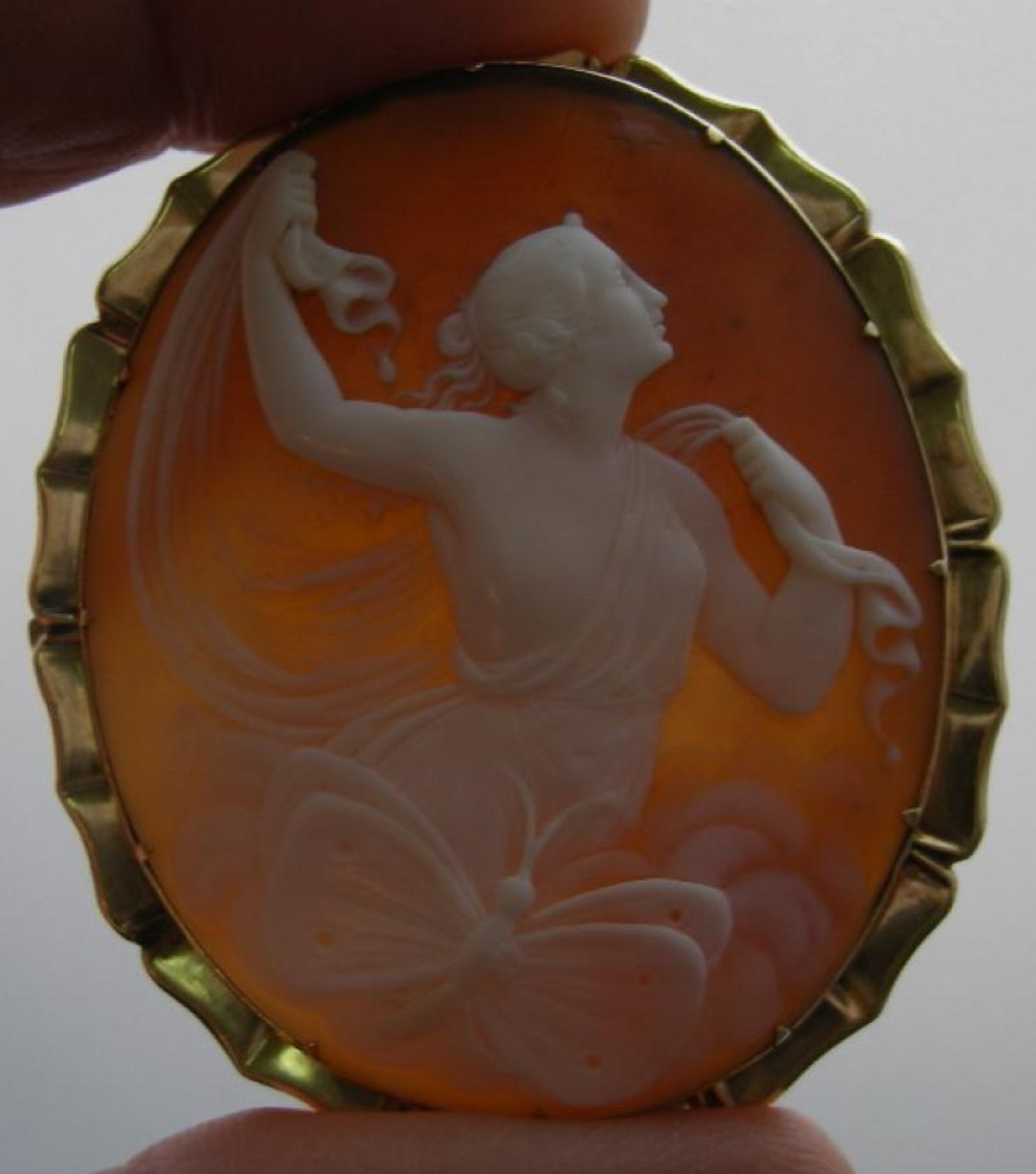 Museum quality cameo depicting Psyche. A rarest depiction of her, never seen before. She does not have the usual butterfly wings in her hair or on her shoulders. A full butterfly is depicted in this amazing cameo. The butterfly seems to carry her on flight. Note that the nipple on her nude breast is not carved, this because in the Victorian era was considered scandalous to show any nude part of the body, so the artist preferred to not carve the nipple. In this way she seems to have a flatter breast, not offensive for that era. A very desiderable collectors piece, rarest and more than museum quality cameo.
A bit of history:
Young girl of extraordinary beauty, Psyche instigates the terrible jealousy of Venus, which orders to Eros to arouse in her the passion for a man of vile condition. The God however  falls in love with Psyche and conduct her in a fabulous palace where every night he goes to visit her under false semblances. Eros asks to the young one not to try to know his identity under  punishment of the abandonment. One night, nevertheless, Psyche, instigated by her malignant and envious sisters and armed with a knife,  draws near to the god making light with a lamp. This way, a drops of oil  strains from the oil lamp falling on the shoulder of Eros, which arouses him and, disappointed, he abandons the young girl . In the desperate search of the lost love Psyche reaches the palace of Venus. The Goddess, moved by the anger, submits the young girl to a series of tests, that Psyche succeeds in overcoming thanks to the help of some Gods. Eros meanwhile, suffering of nostalgia, goes to  search for the beloved one and found her, he asks the permission to marry her to Jupiter. The king of the Gods  orders therefore to Mercury to go to take Psyche and to conduct her on the Olimpo among the immortal ones. The history of Eros and Psyche  fascinated particularly the Renaissance artists that represented her in all of her episodes in the decorations of  noble palaces