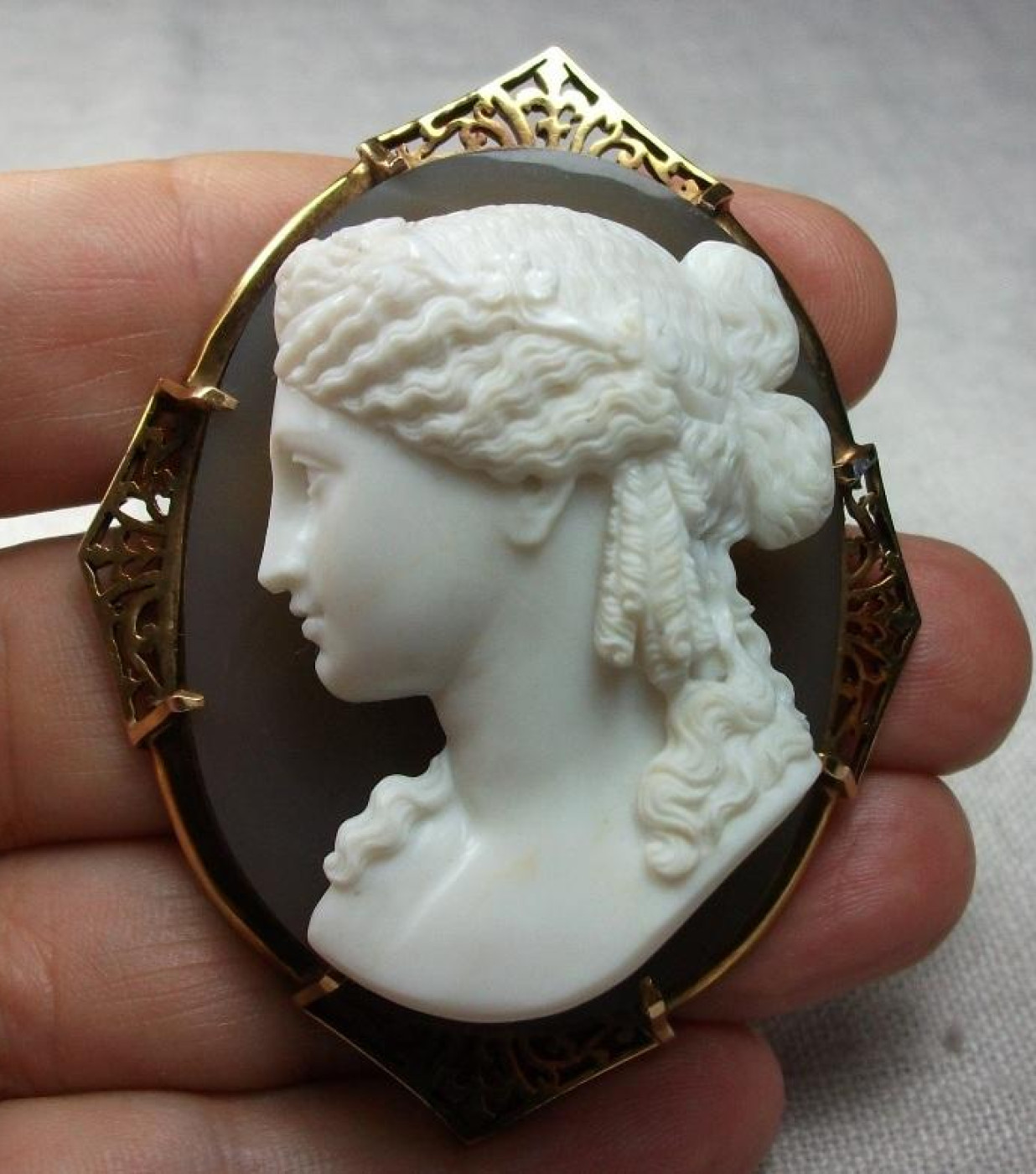 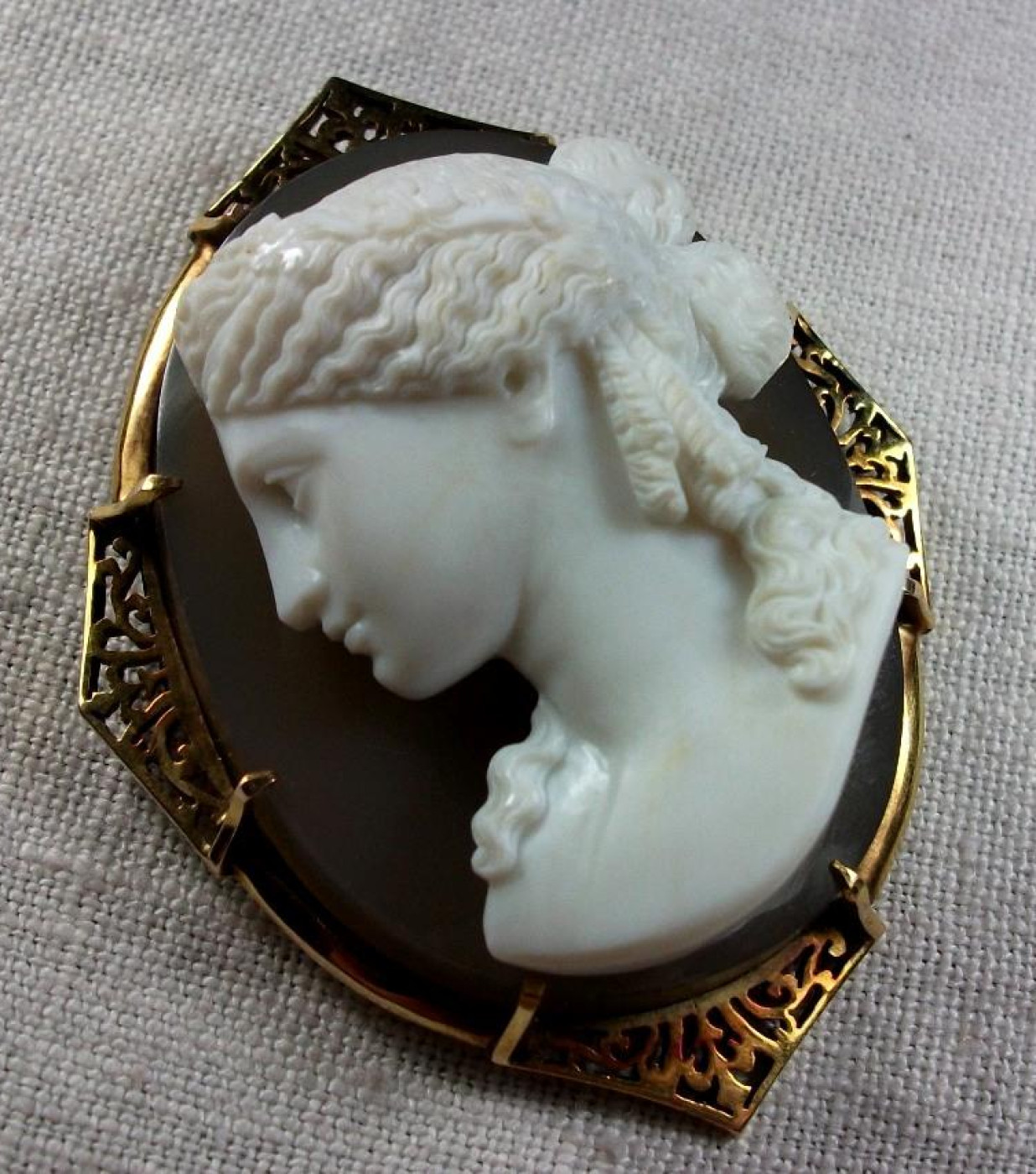 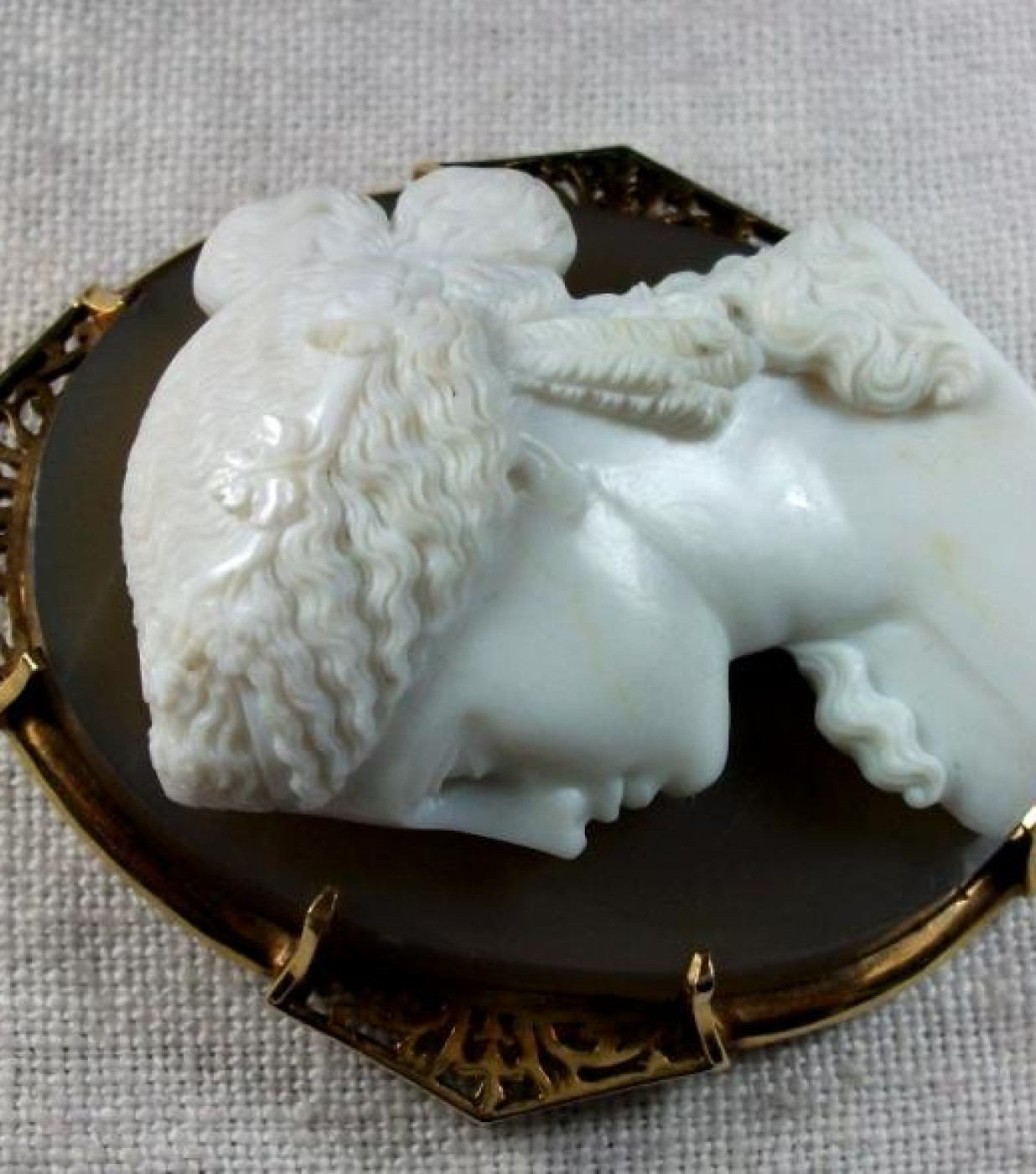 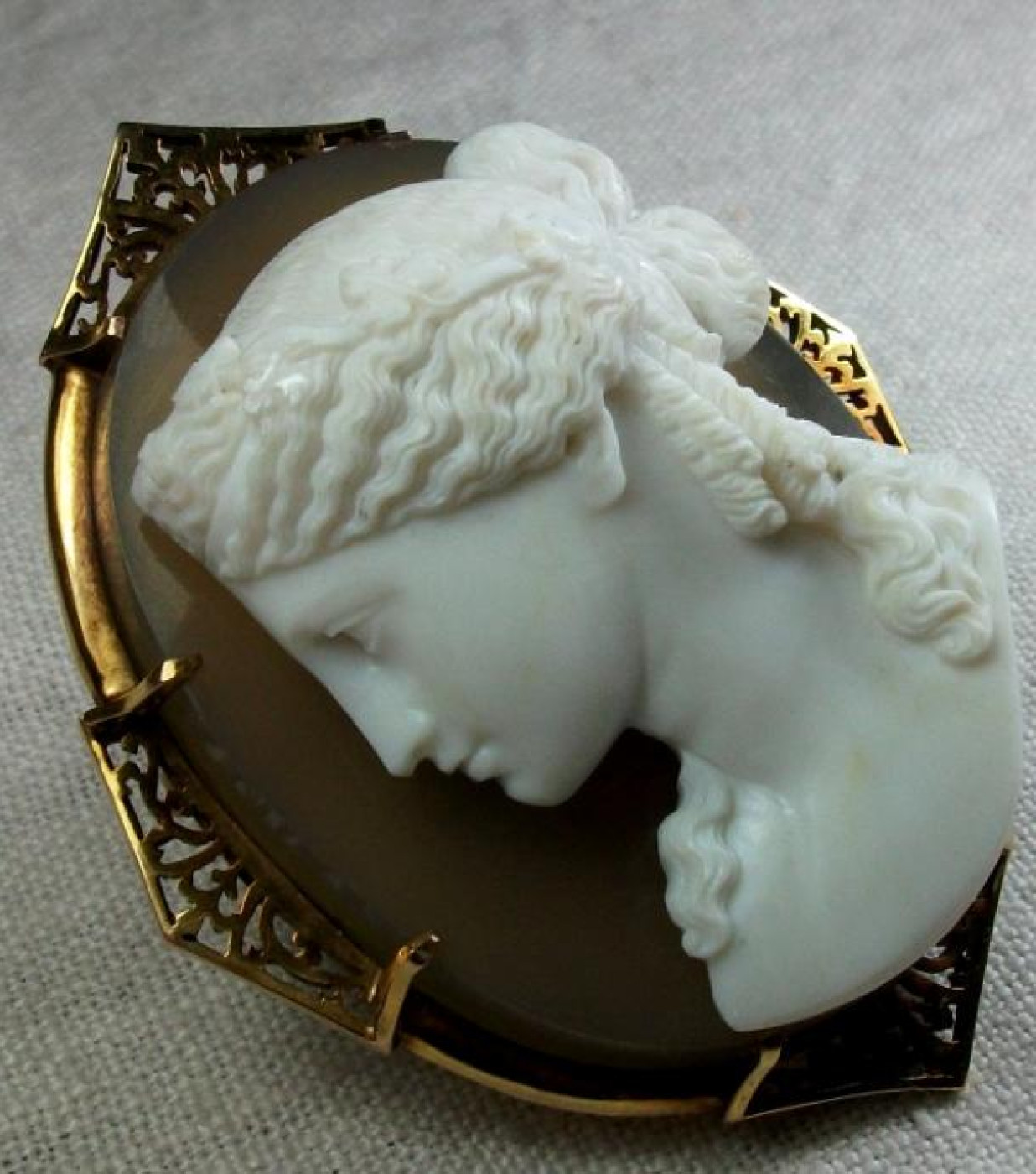 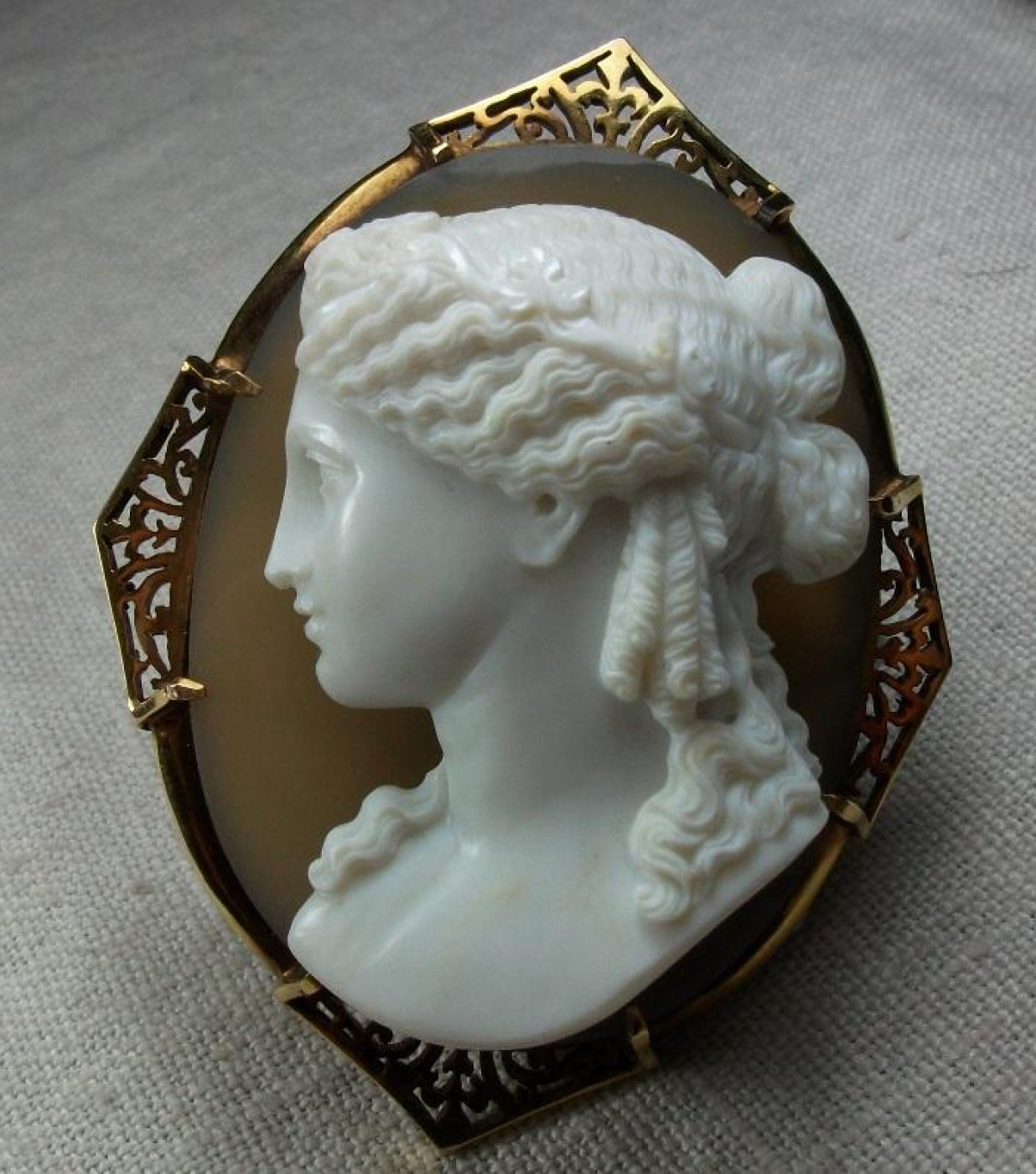 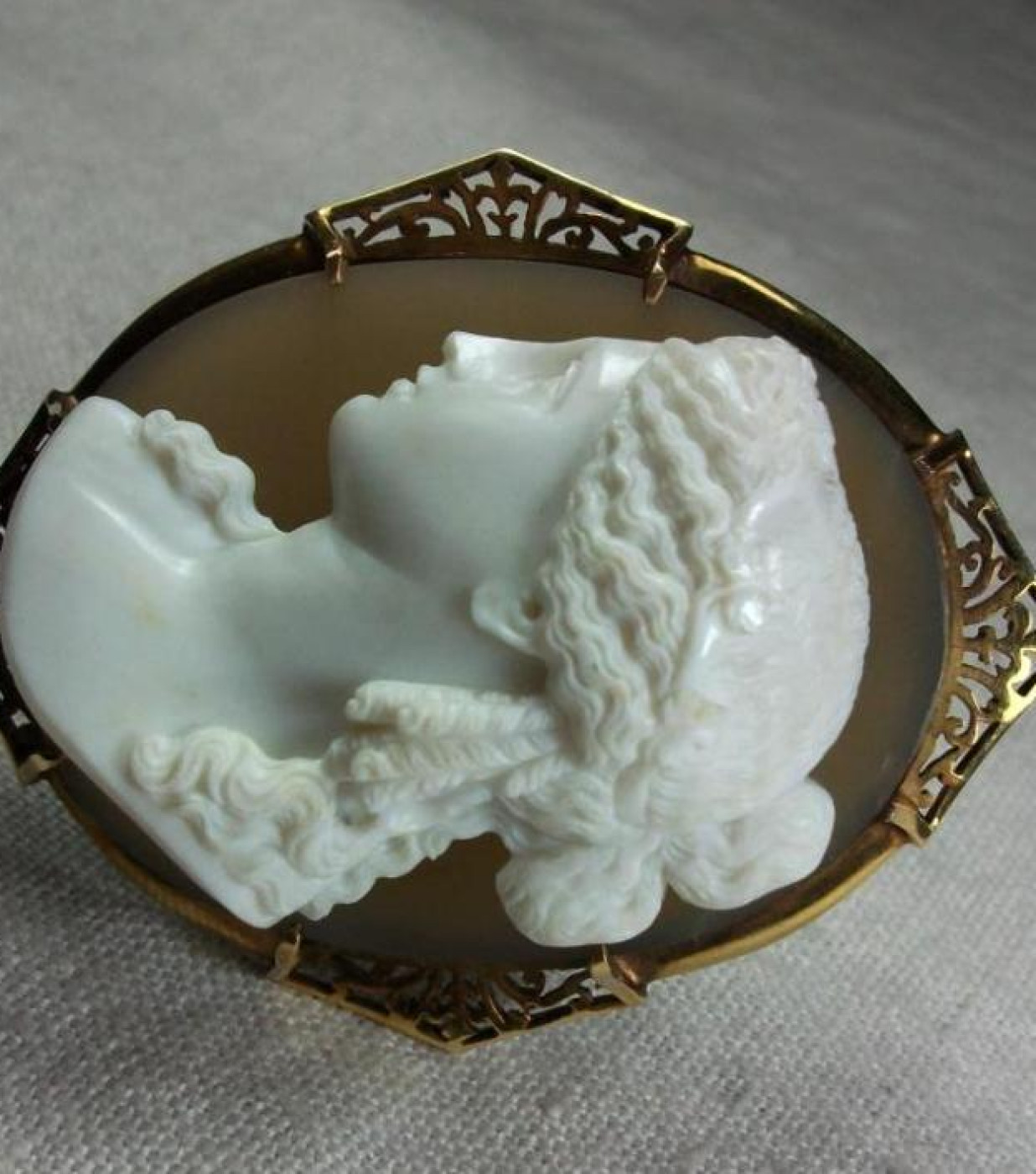 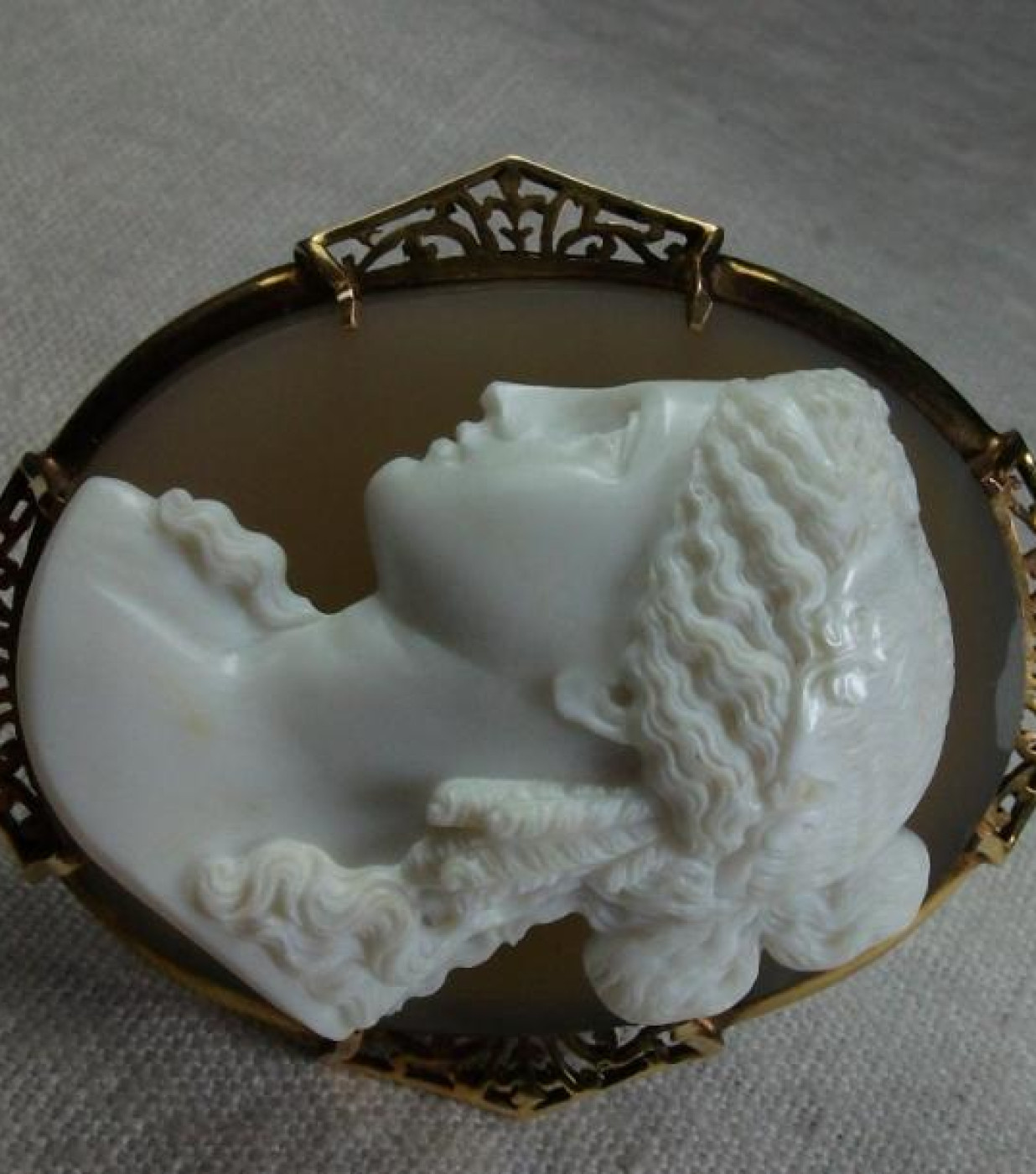 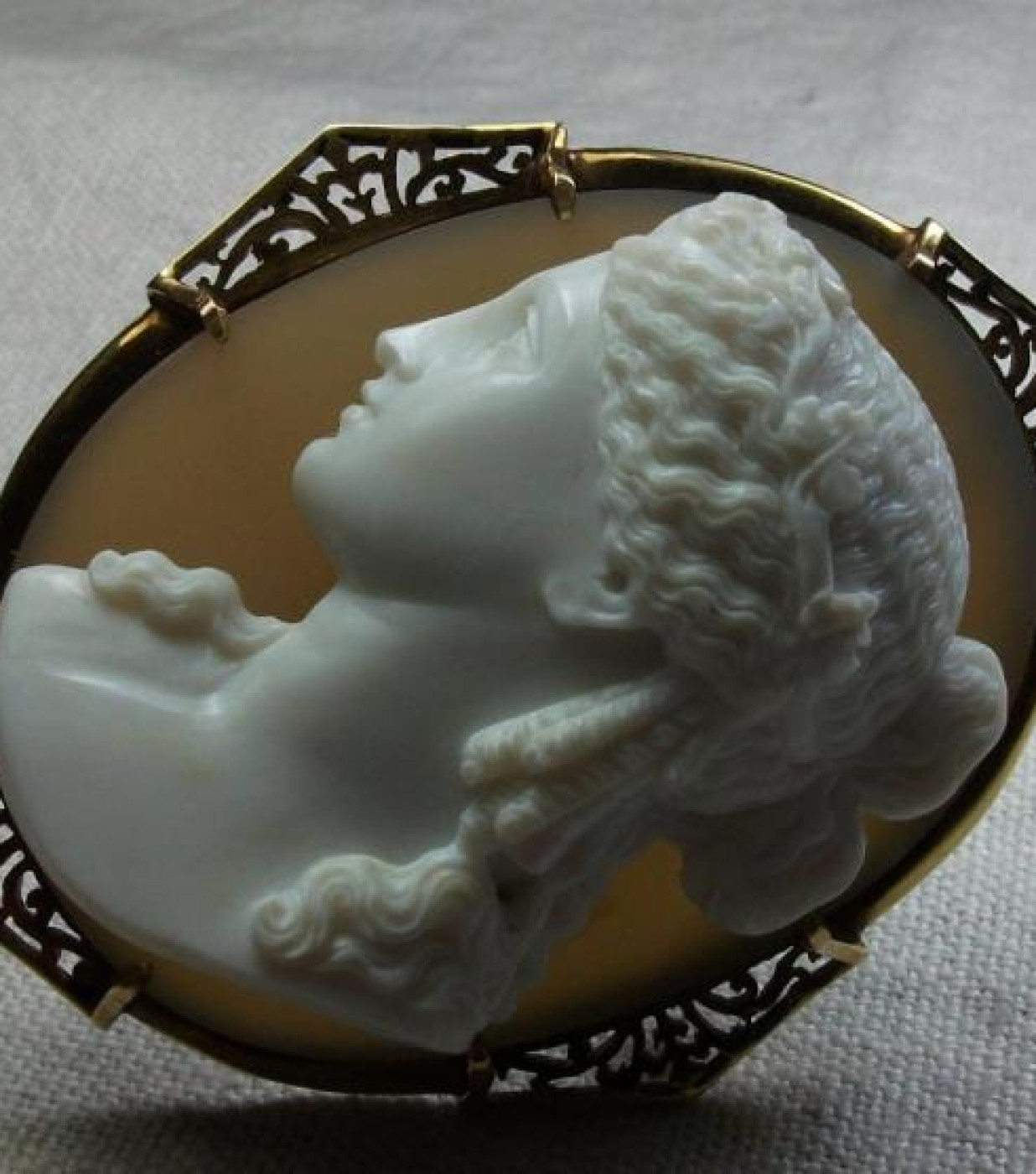 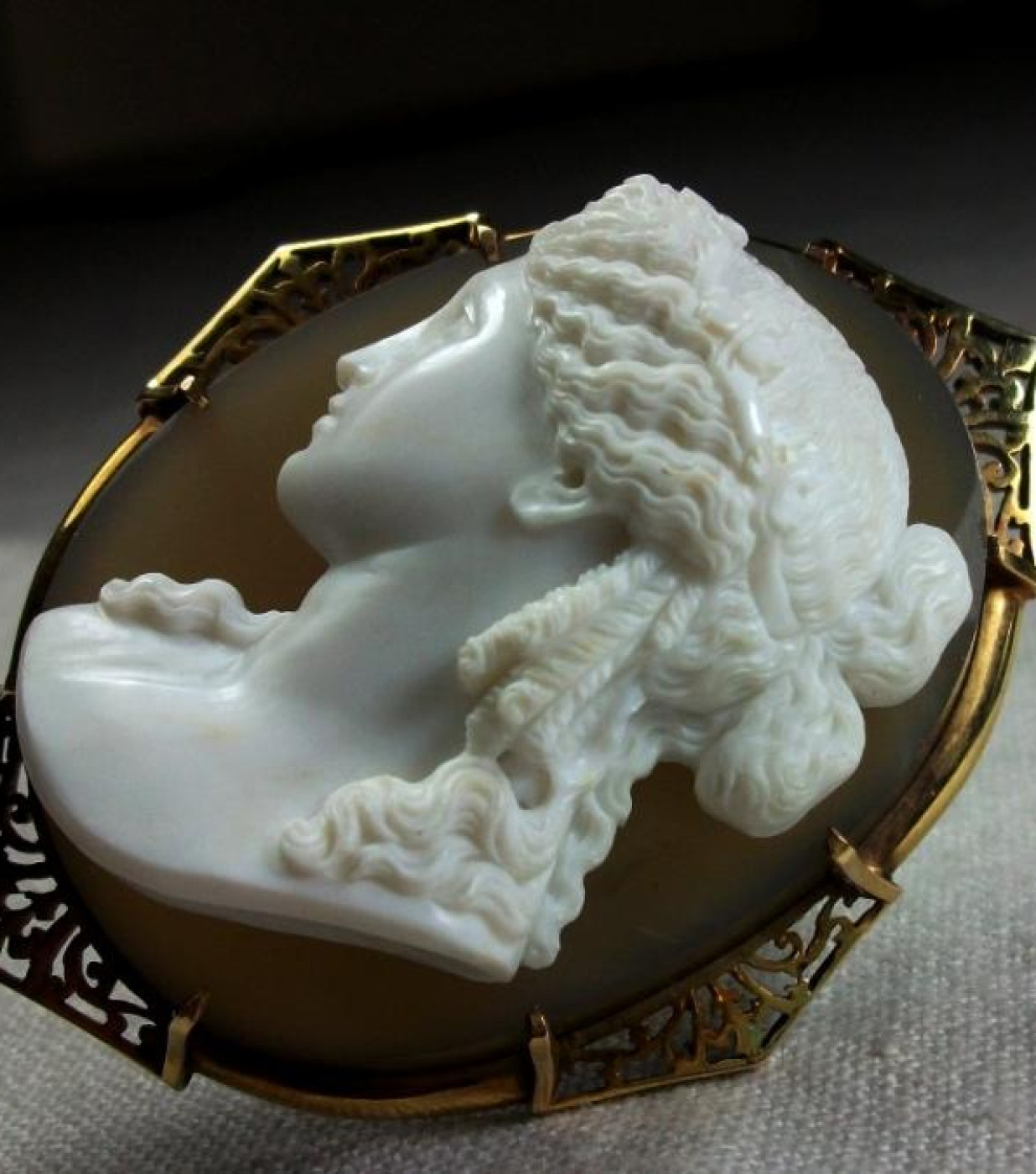 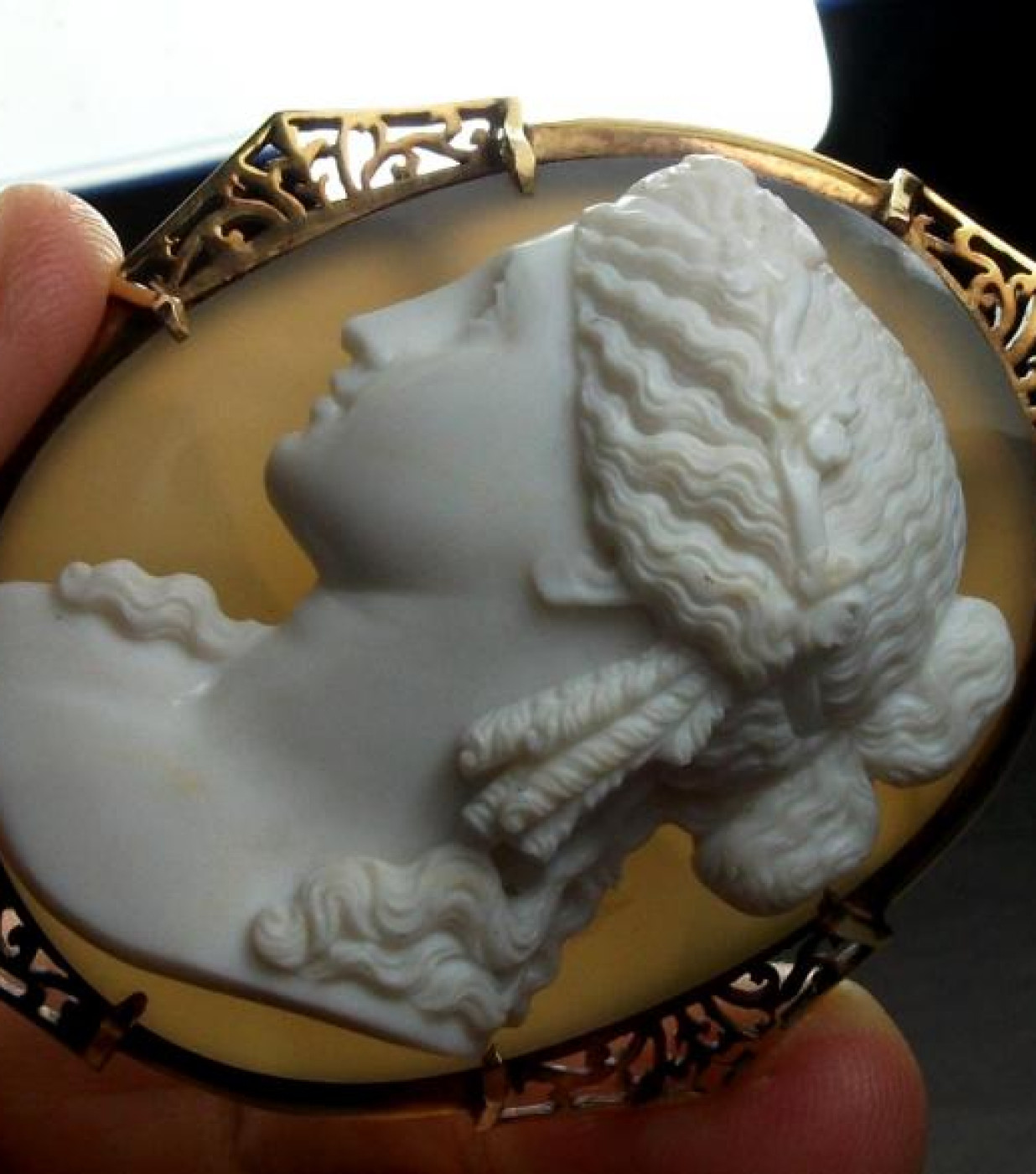 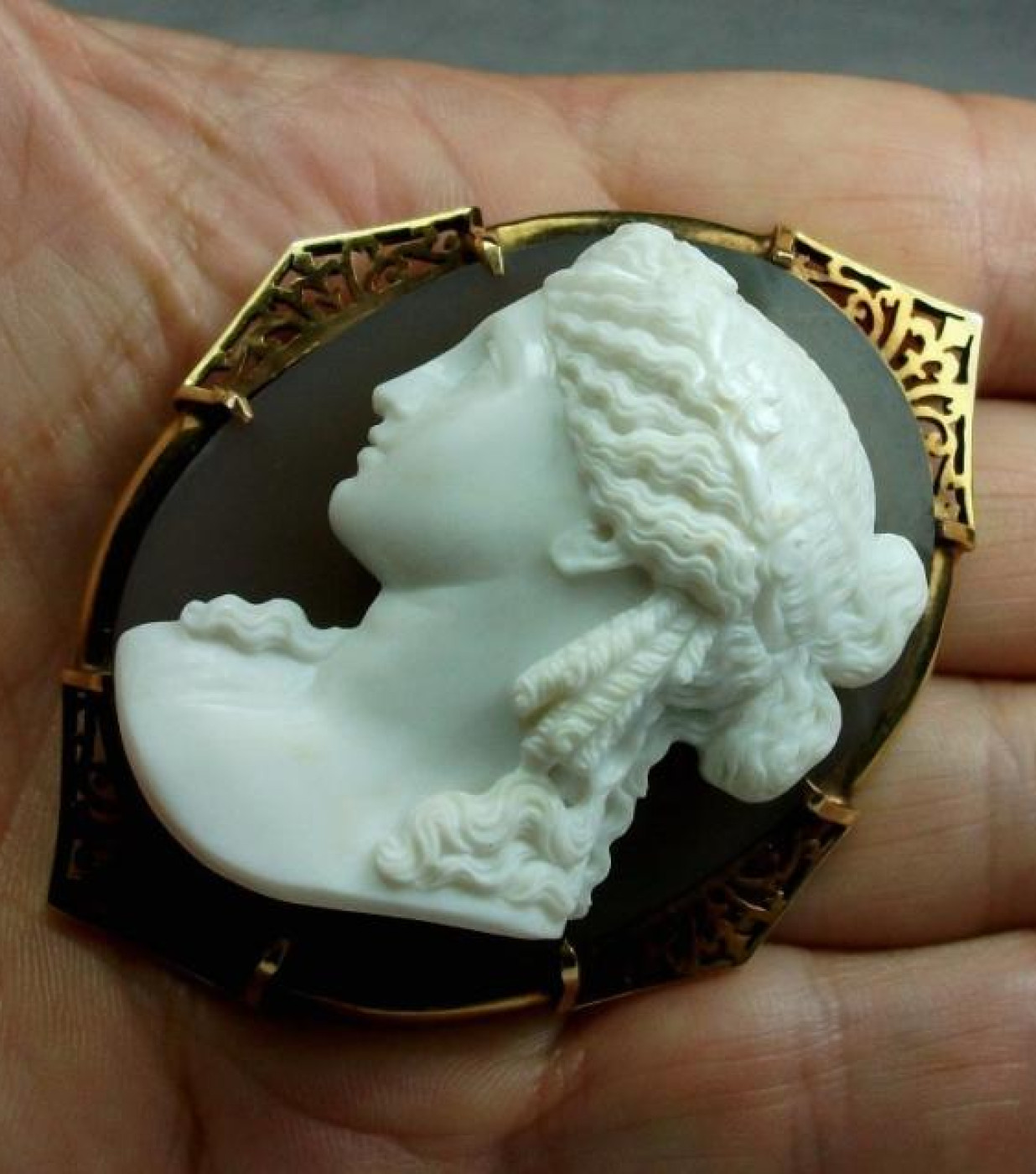 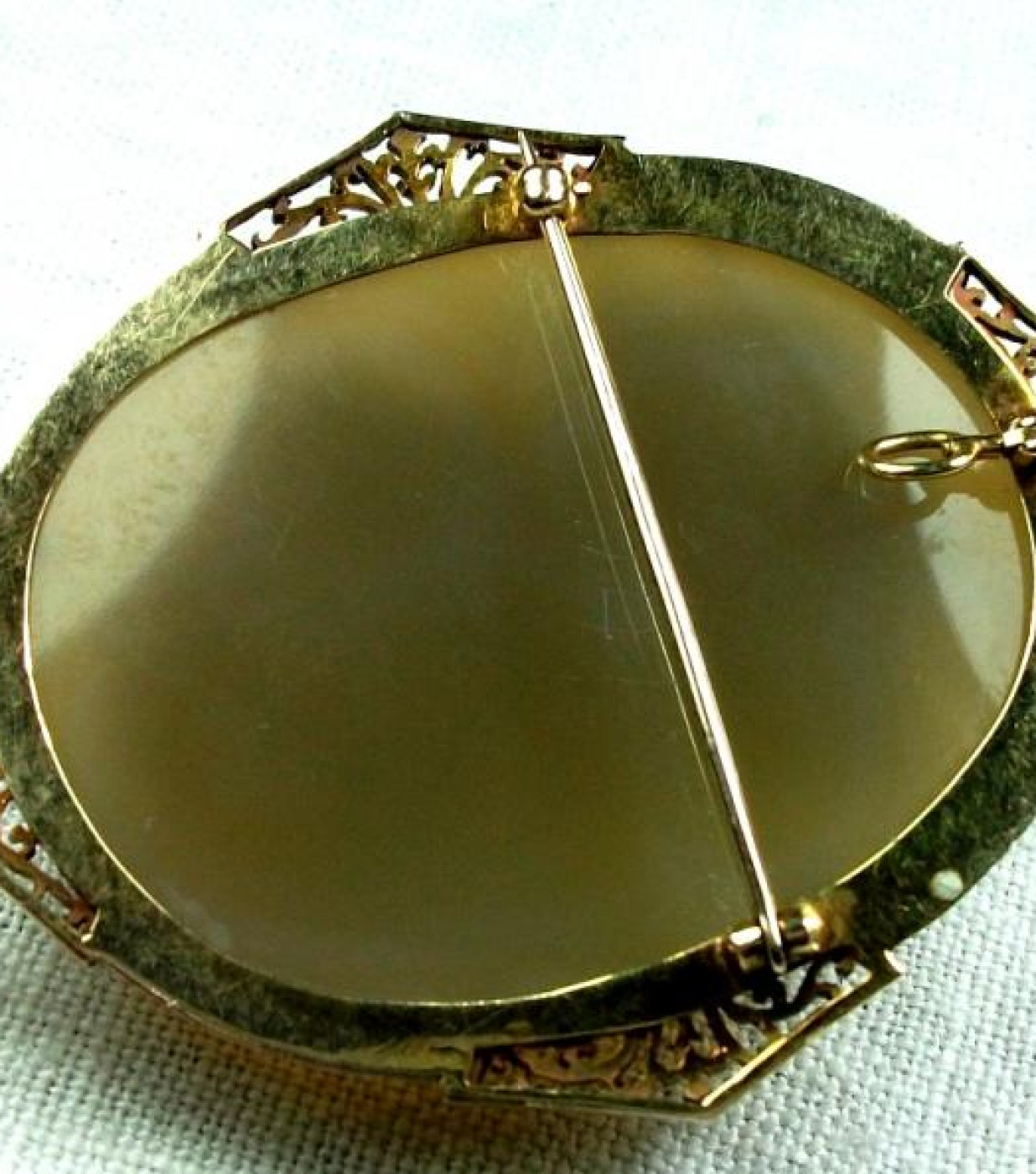 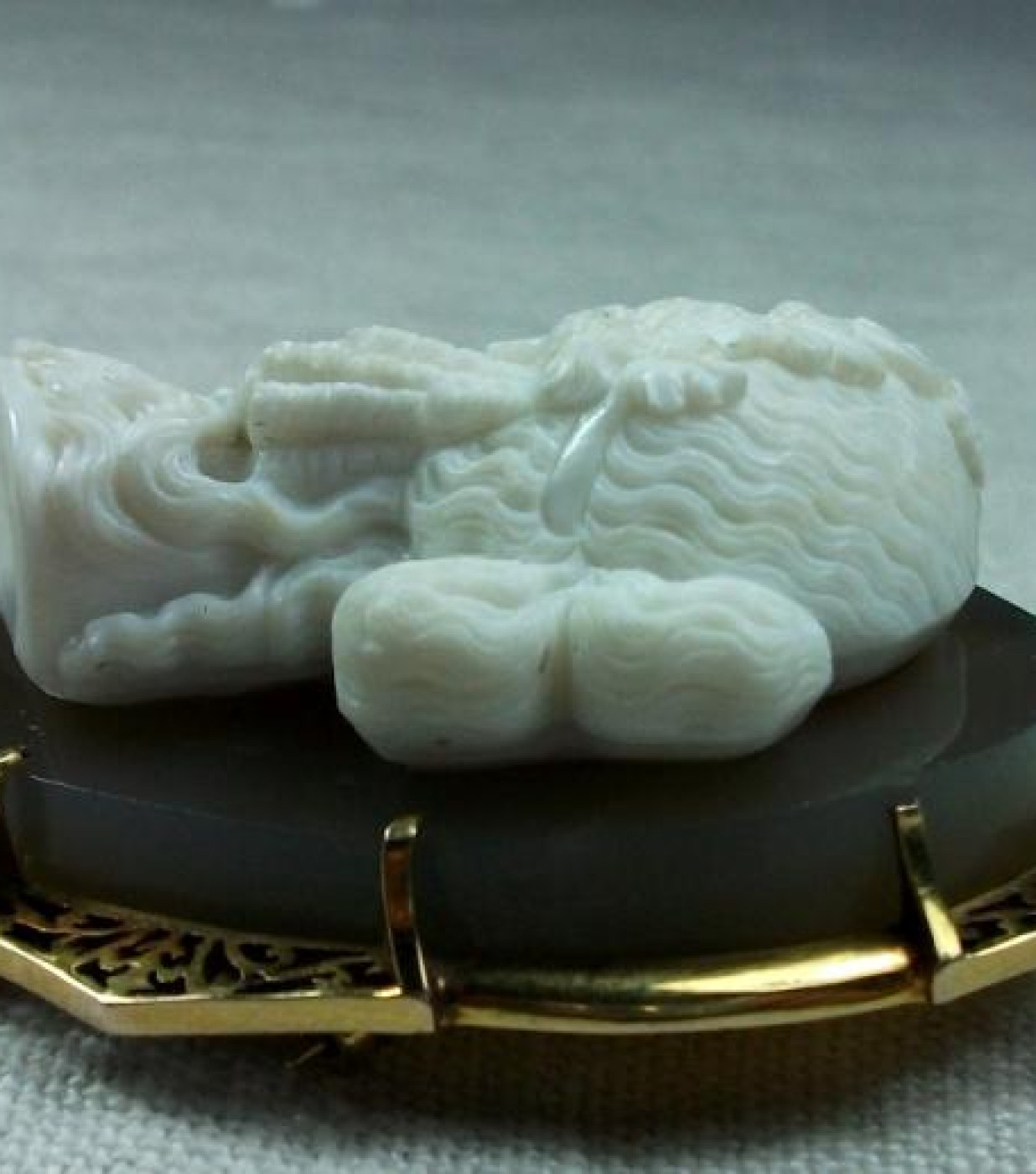 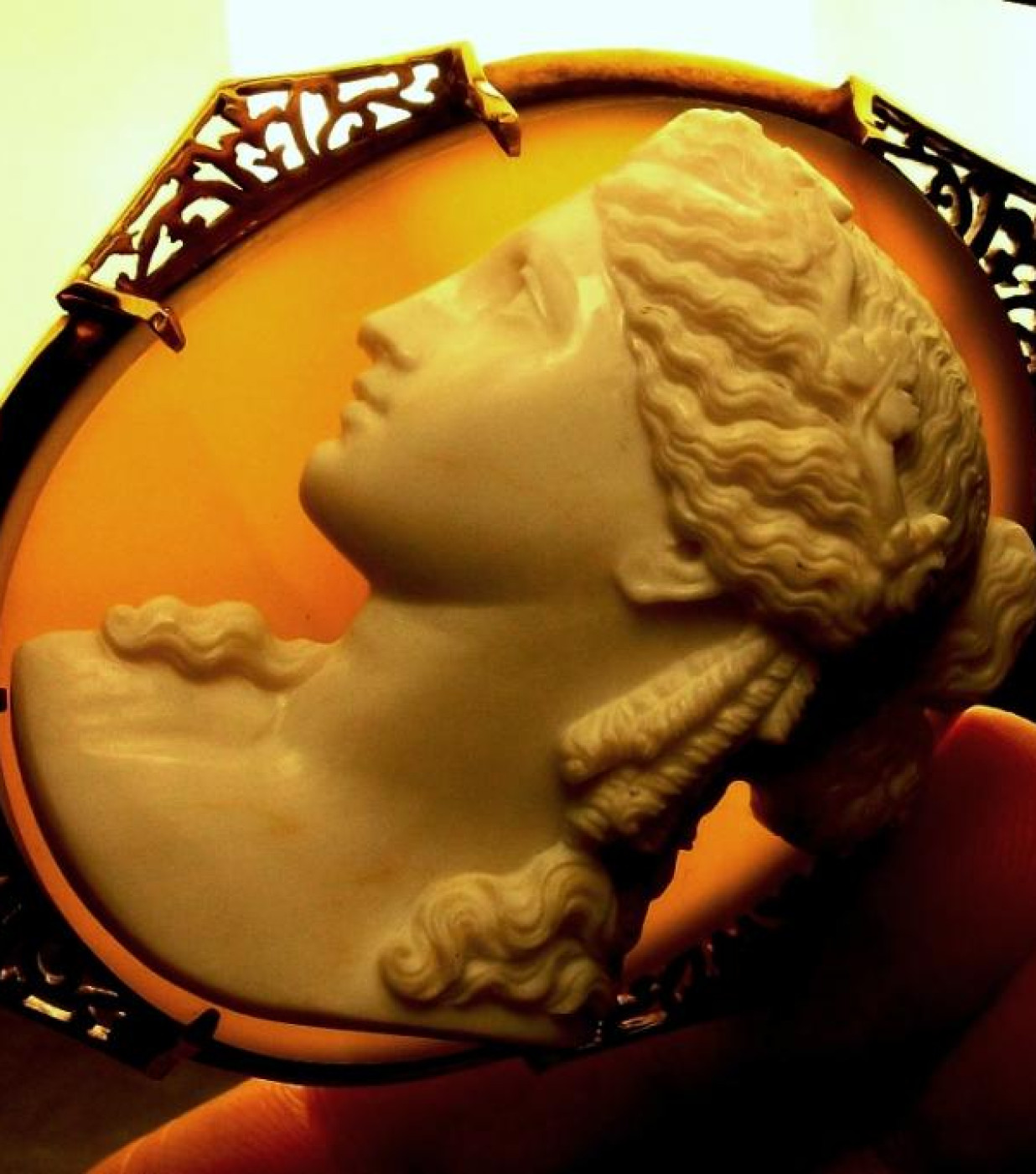 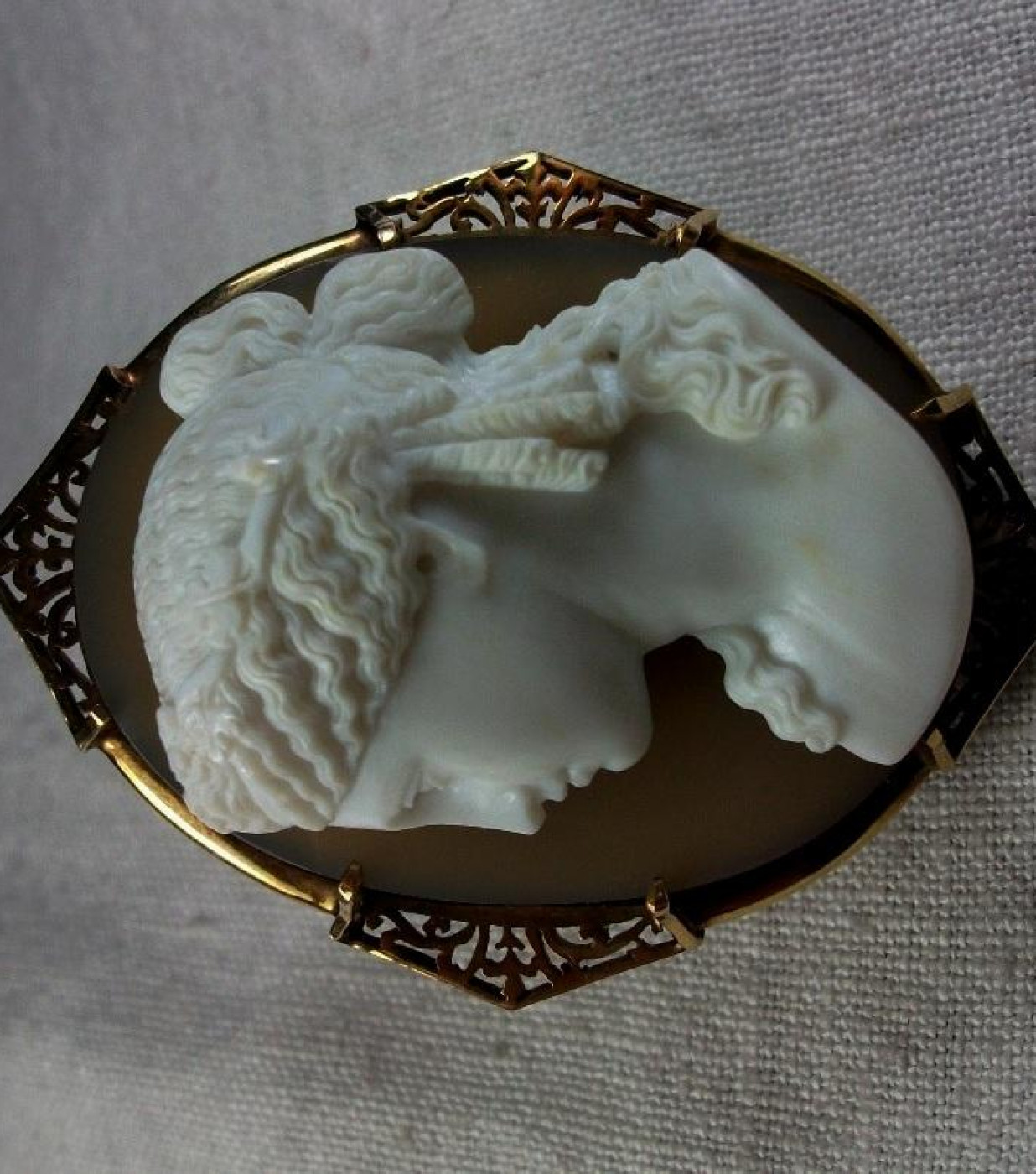 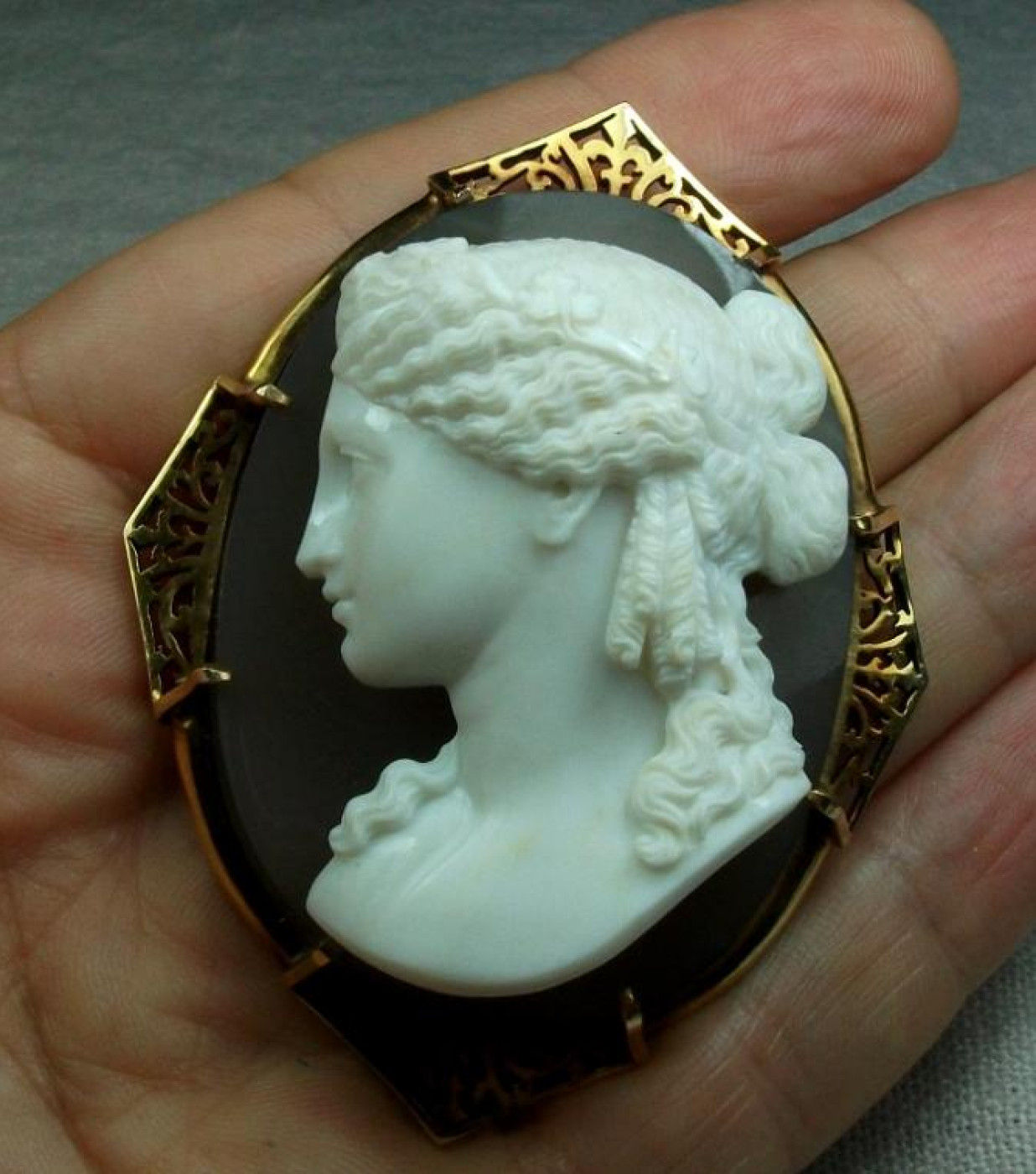 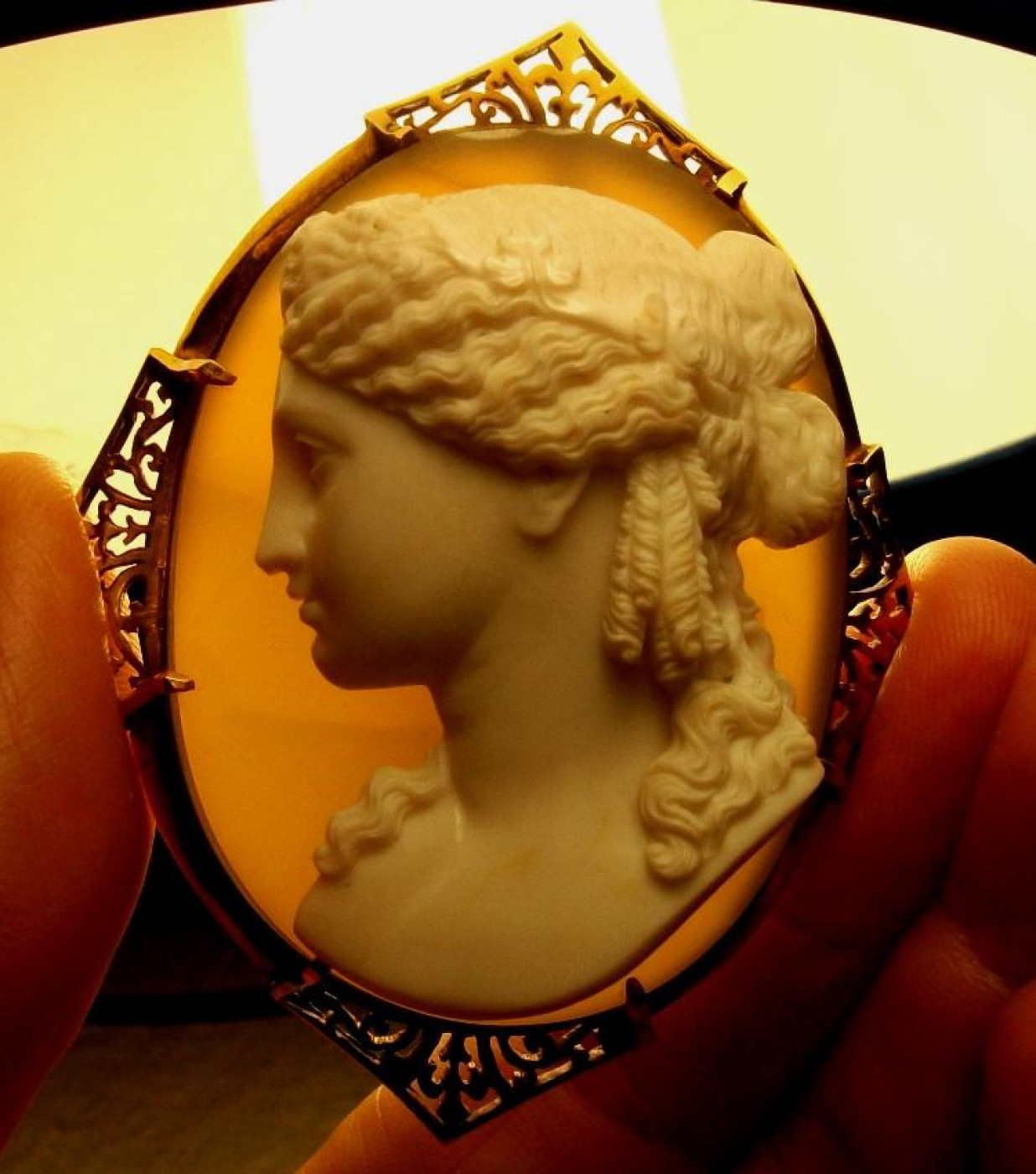 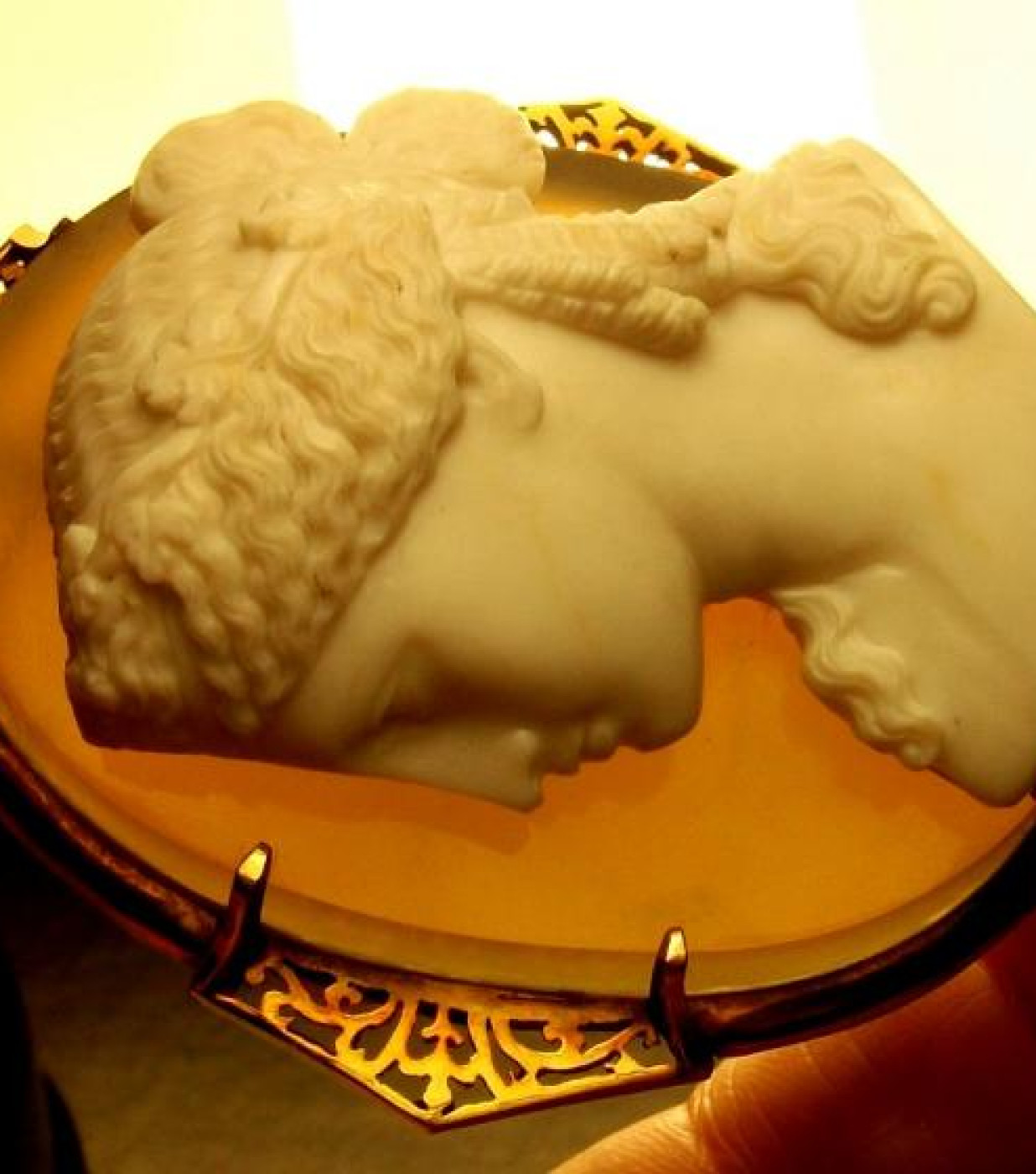 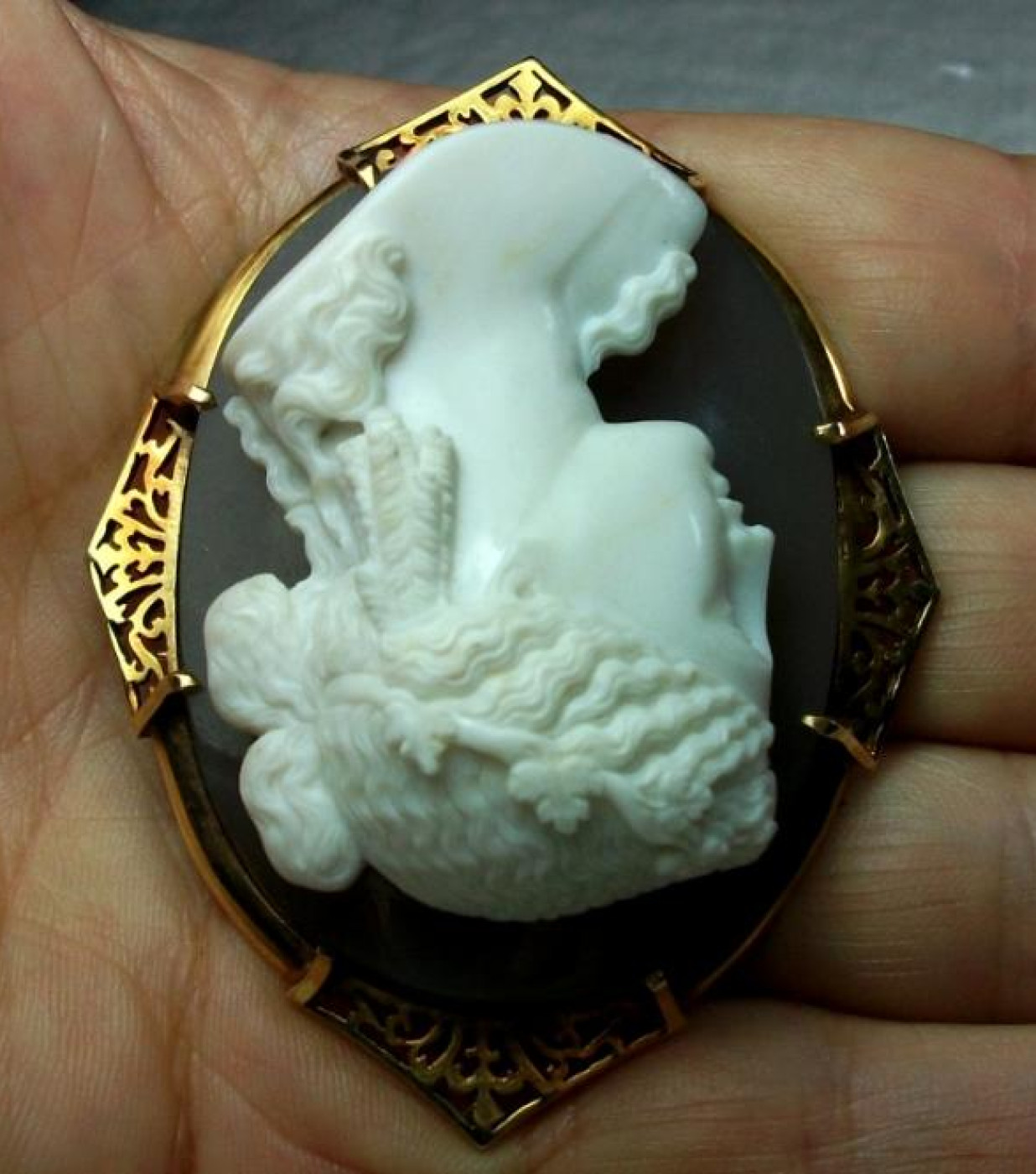 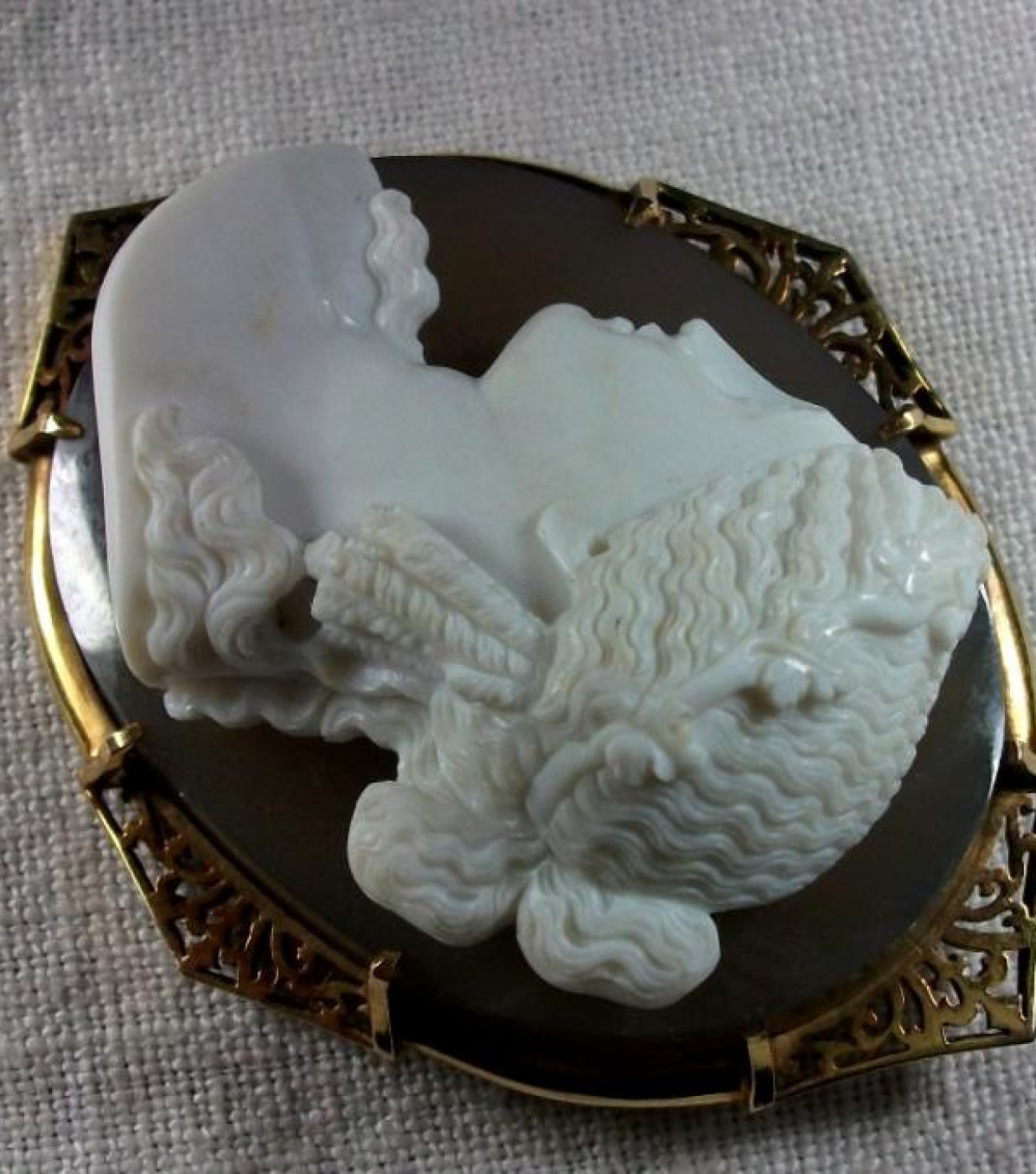 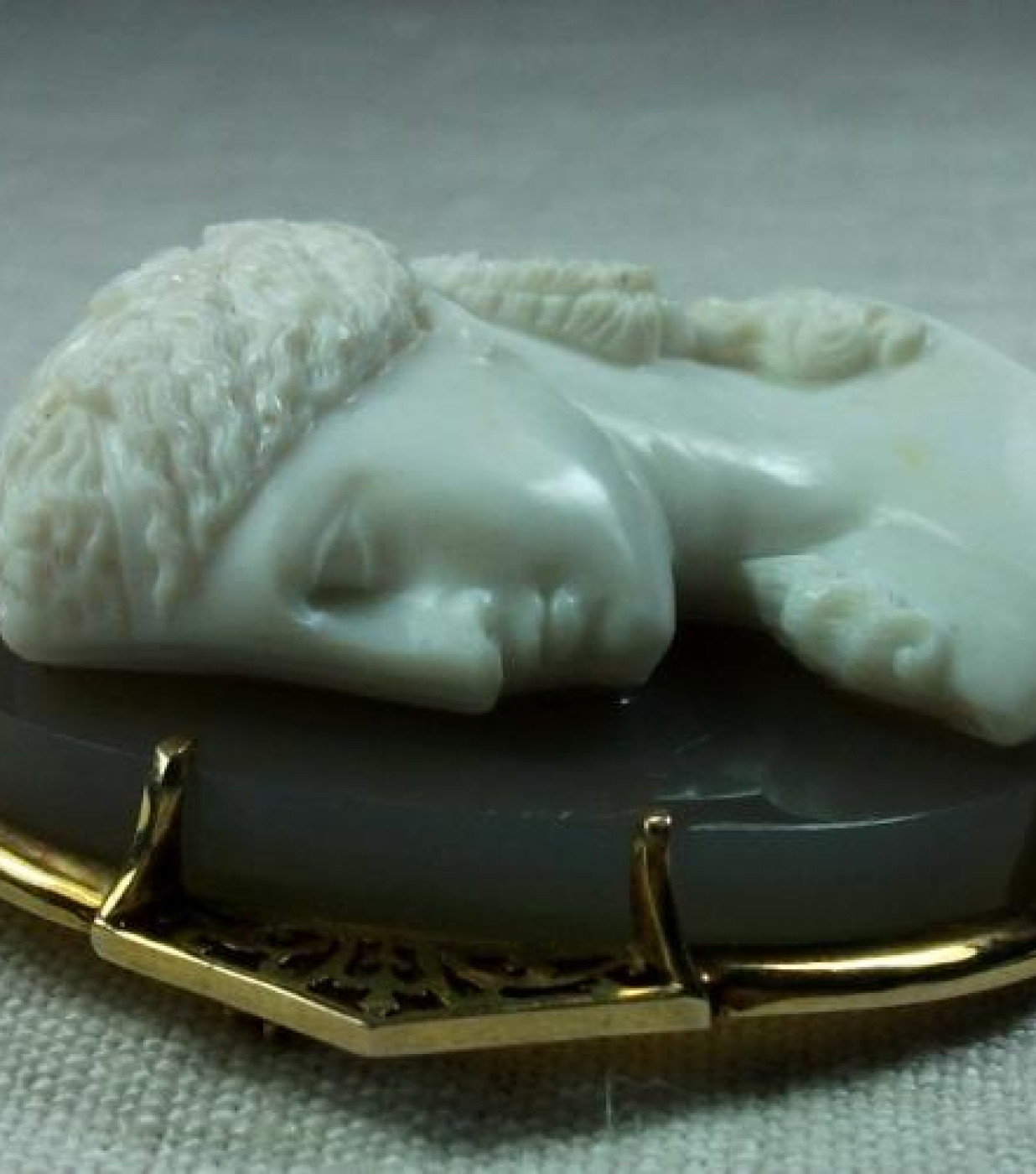 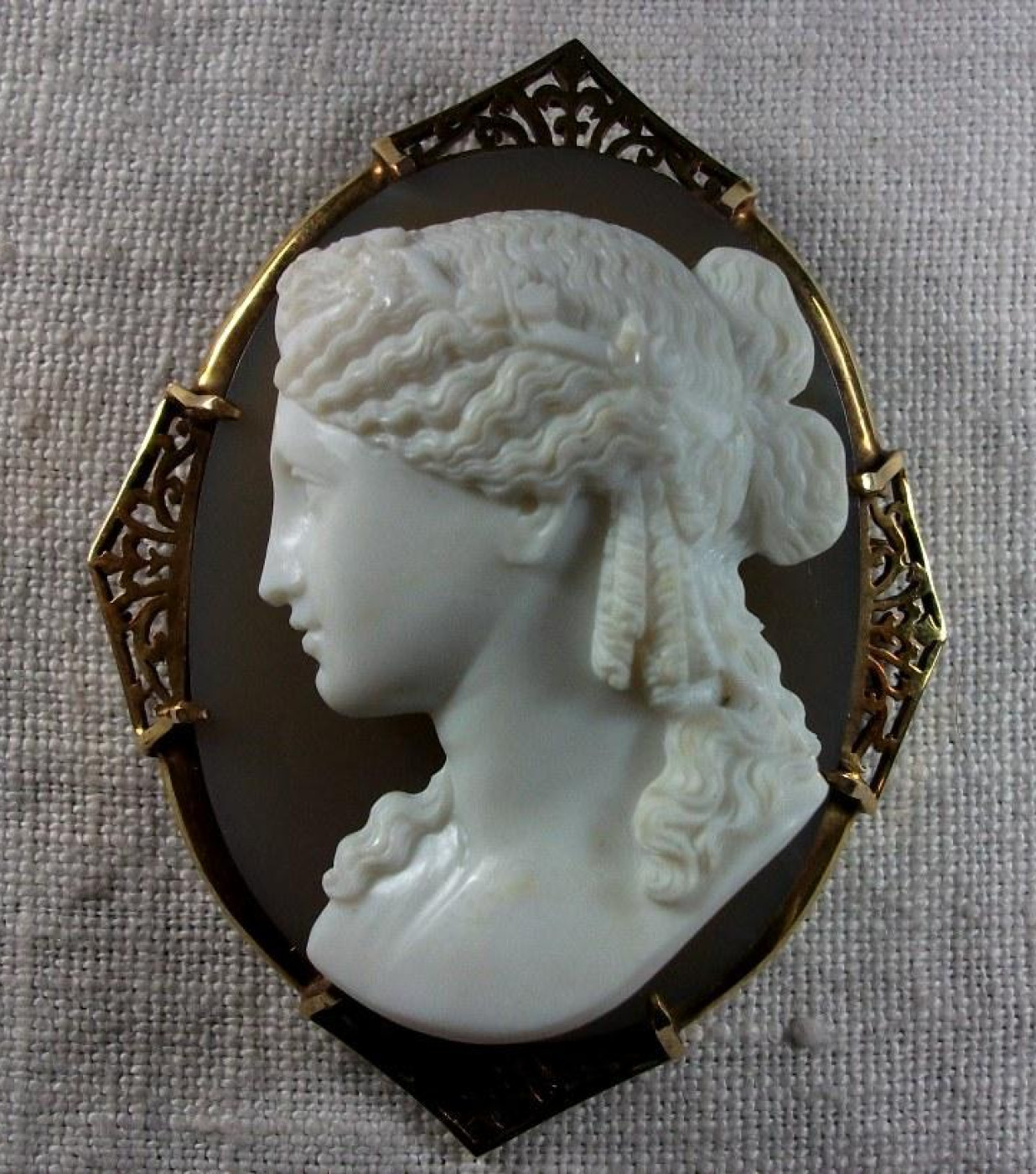 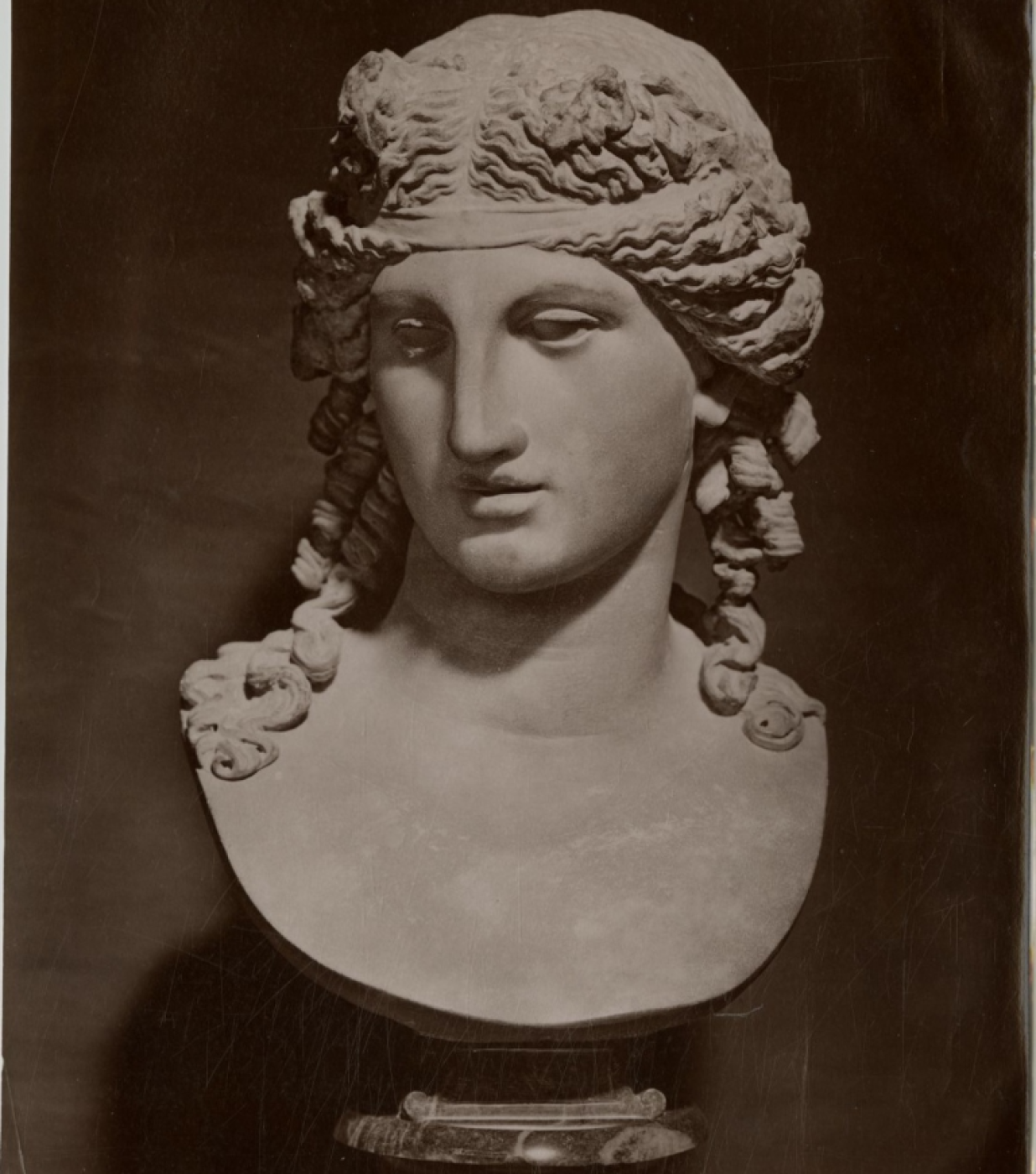 This is an outstanding and gorgeous Museum Quality cameo depicting Ariadne, the immortal wife of the wine God Dionysus. The  cameo is very large and can be worn as a brooch or as a pendant, the bale can be hidden on the back when cameo is worn as a brooch. The subject is a after a marble bust of Ariadne Roman Imperial (1st-4th century A.D.) now in the Vatican Museums in Rome. The carving on this cameo is really more than superb, A three-dimensional carving who evidences the magnificent beauty of the subject. Ariadne really jumps out from the background, the heigth of the cameo is about 1/2", the stone is a two layers one, pale green for the background and white for the carving. She’s pretty and has curly long hair embellished with vine leaves. The frame is another work of art, chiselled gold on the four cardinal points which evidences the cameo. A piece who really would deserve to be displayed in a Museum. Another great treat for cameos collectors.

Ariadne was the immortal wife of the wine-god Dionysus.
There were several versions of her story. In one, Ariadne, a daughter of King Minos of Krete (Crete), assisted Theseus in his quest to slay the Minotaur and then fled with the hero aboard his ship. When they landed on the island of Naxos Theseus abandoned her as she slept. It was then that Dionysos discovered her and made her his wife. Some say she was later slain by the goddess Artemis or else ascended to Olympos with her husband as an immortal.
According to others Ariadne's bridal with Dionysos occurred several generations before this when the god was still travelling the earth spreading his cult. During his war against Argives with a band of sea-women, Ariadne was slain or turned to stone by King Perseus. The god descended into the underworld to recover her and brought her back with him to Olympos.
In Greek vase painting Ariadne is often depicted alongside Dionysus--either feasting with the gods of Olympos or in Bacchic scenes surrounded by dancing Satyrs and Mainades. Dionysus' discovery of the sleeping Ariadne on Naxos was also a popular scene in classical art.