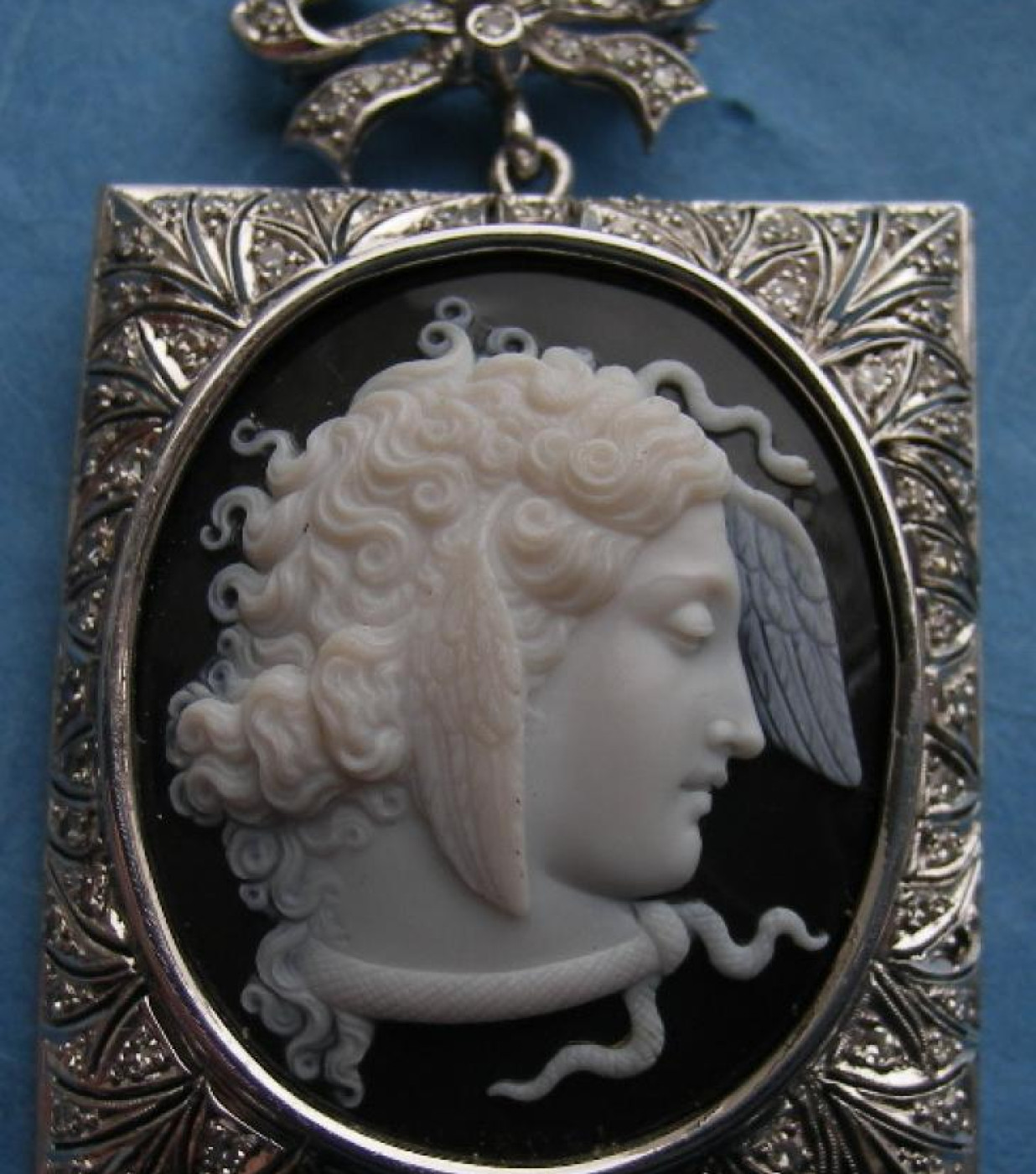 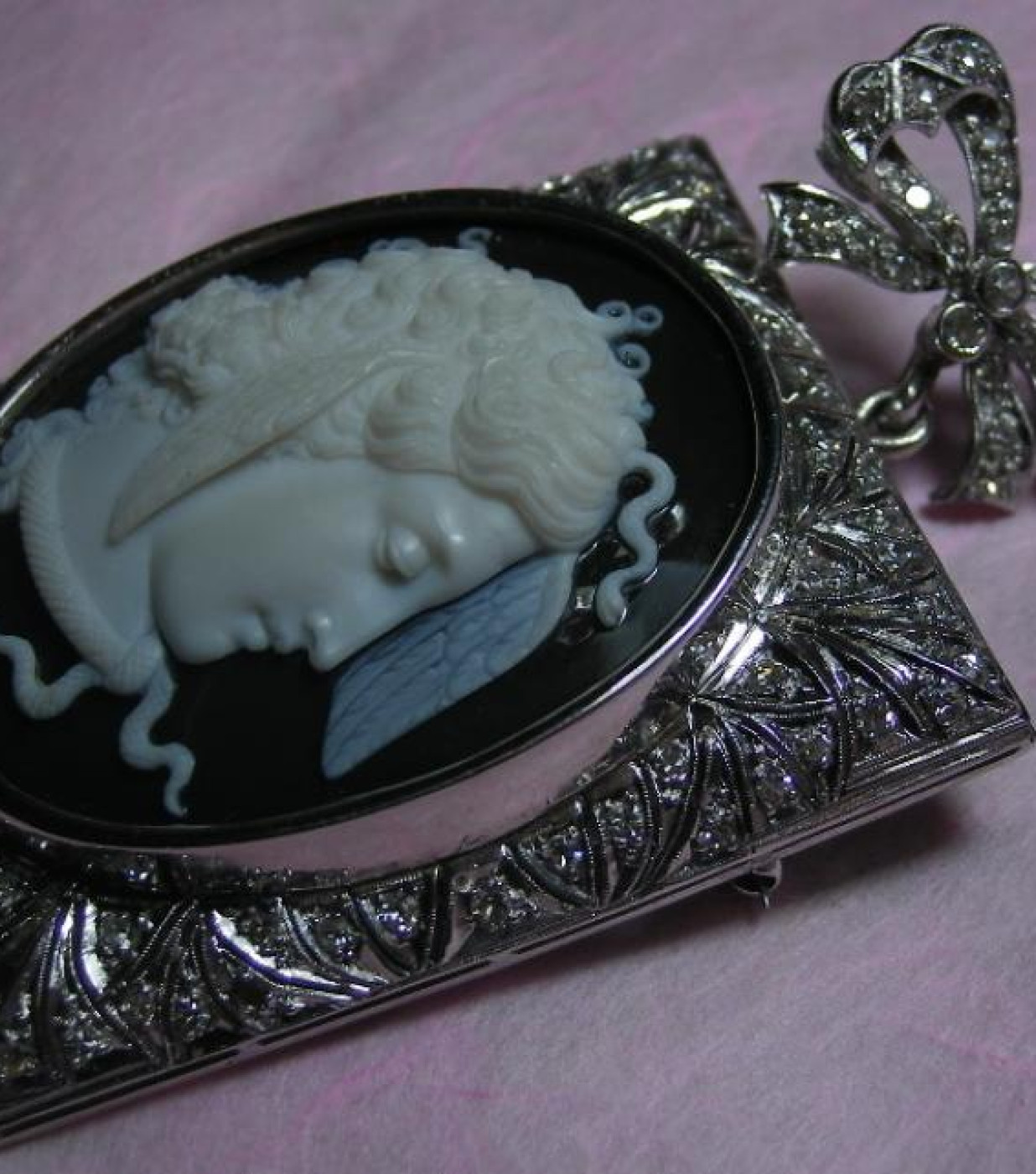 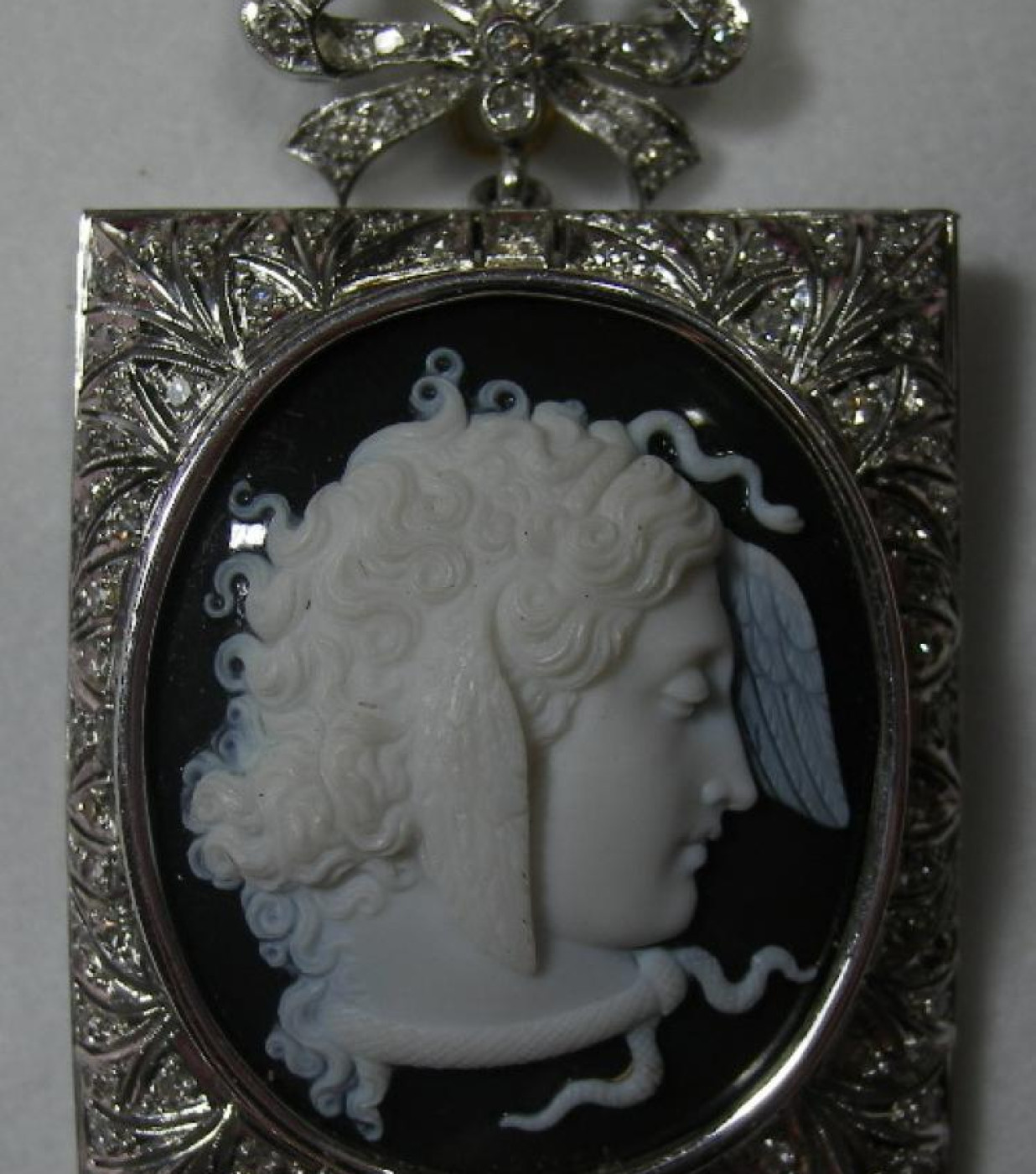 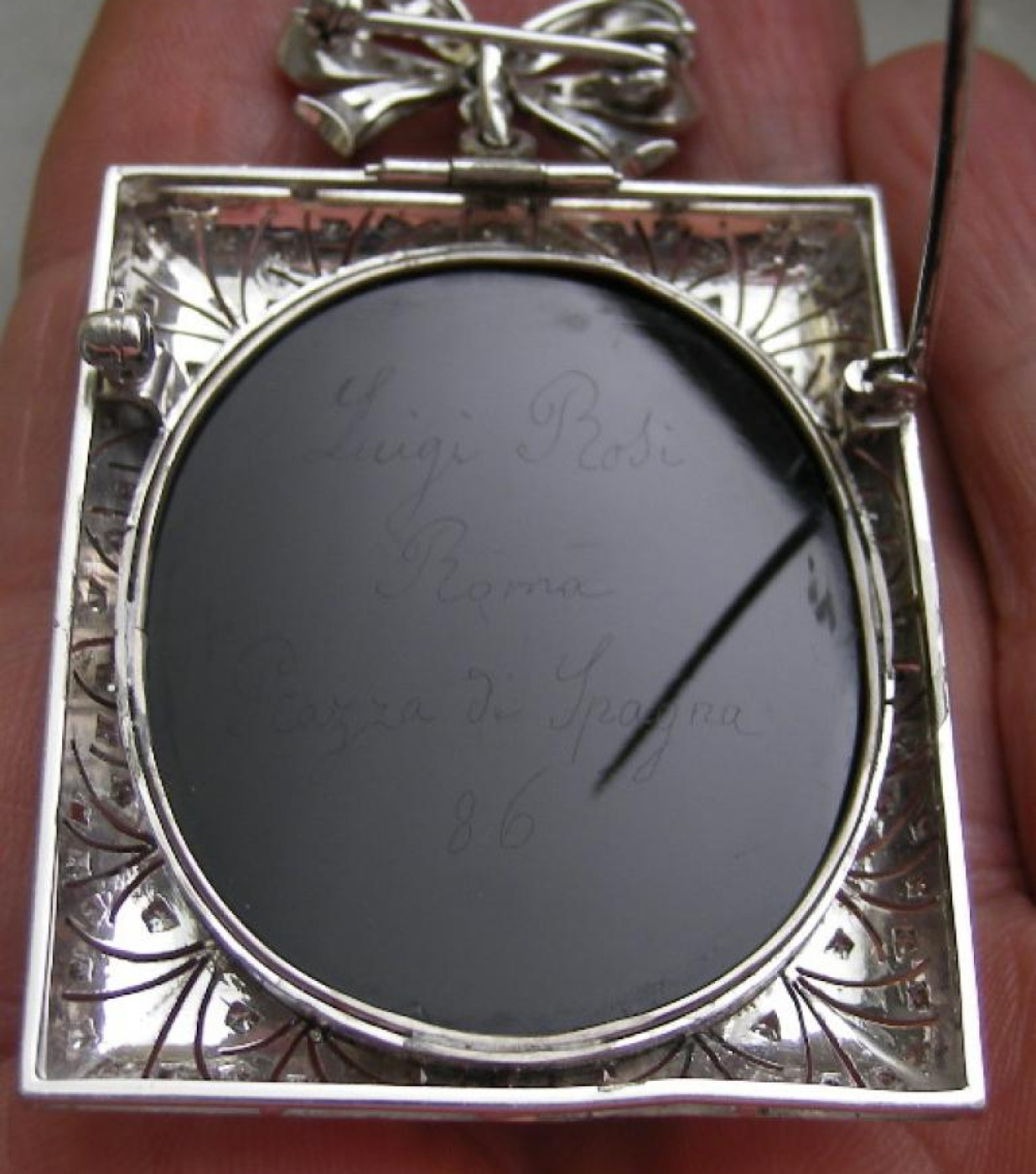 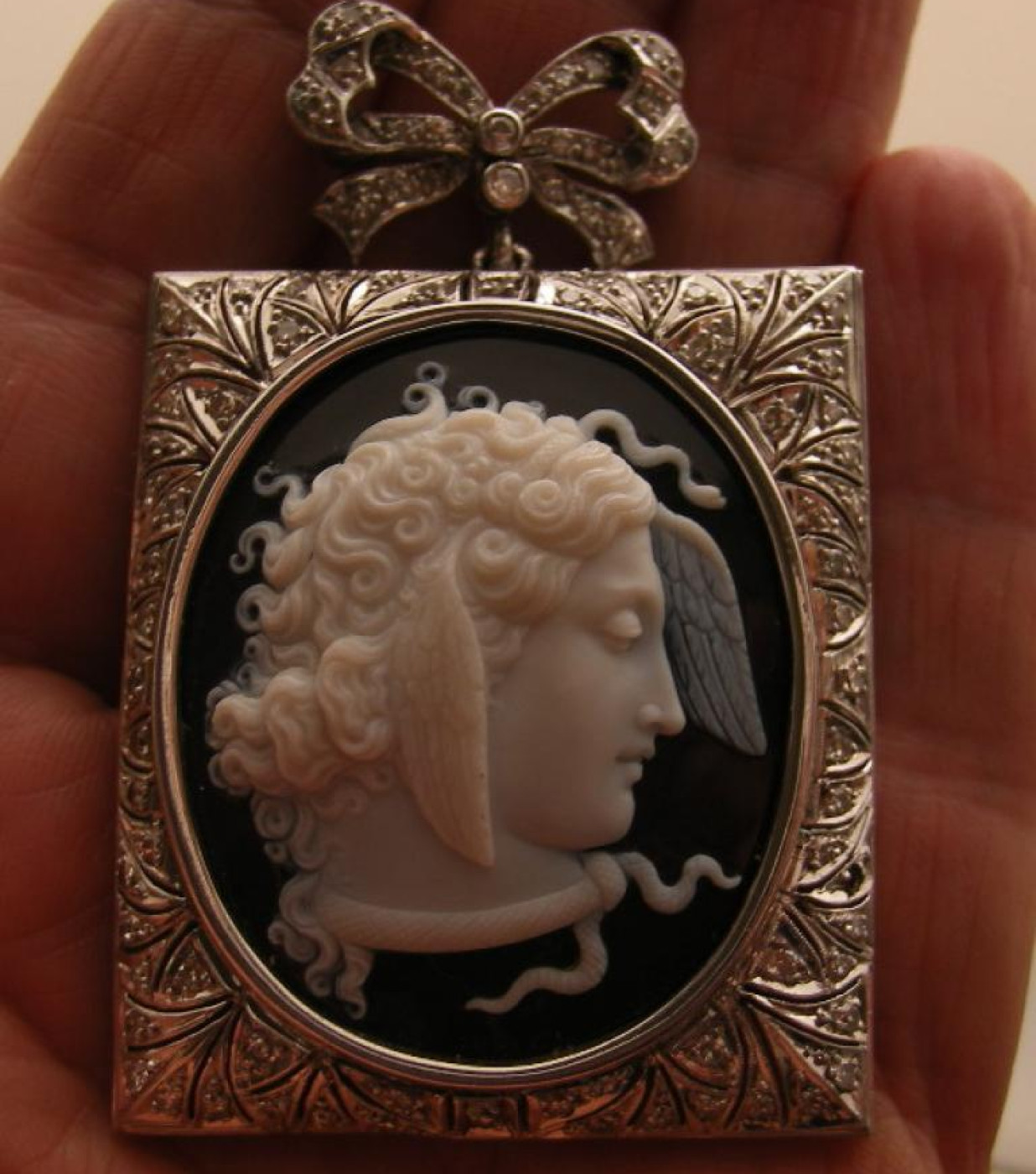 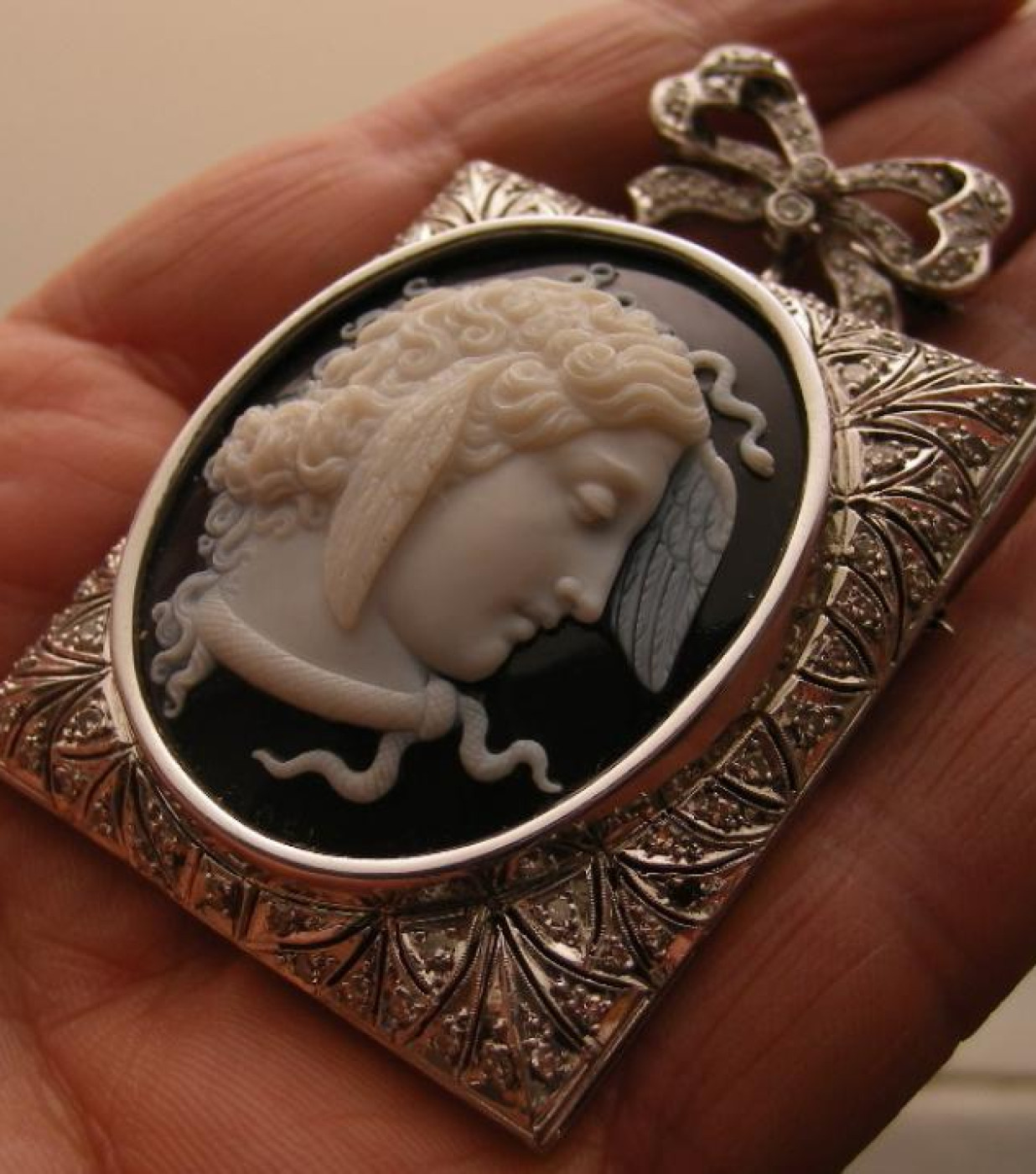 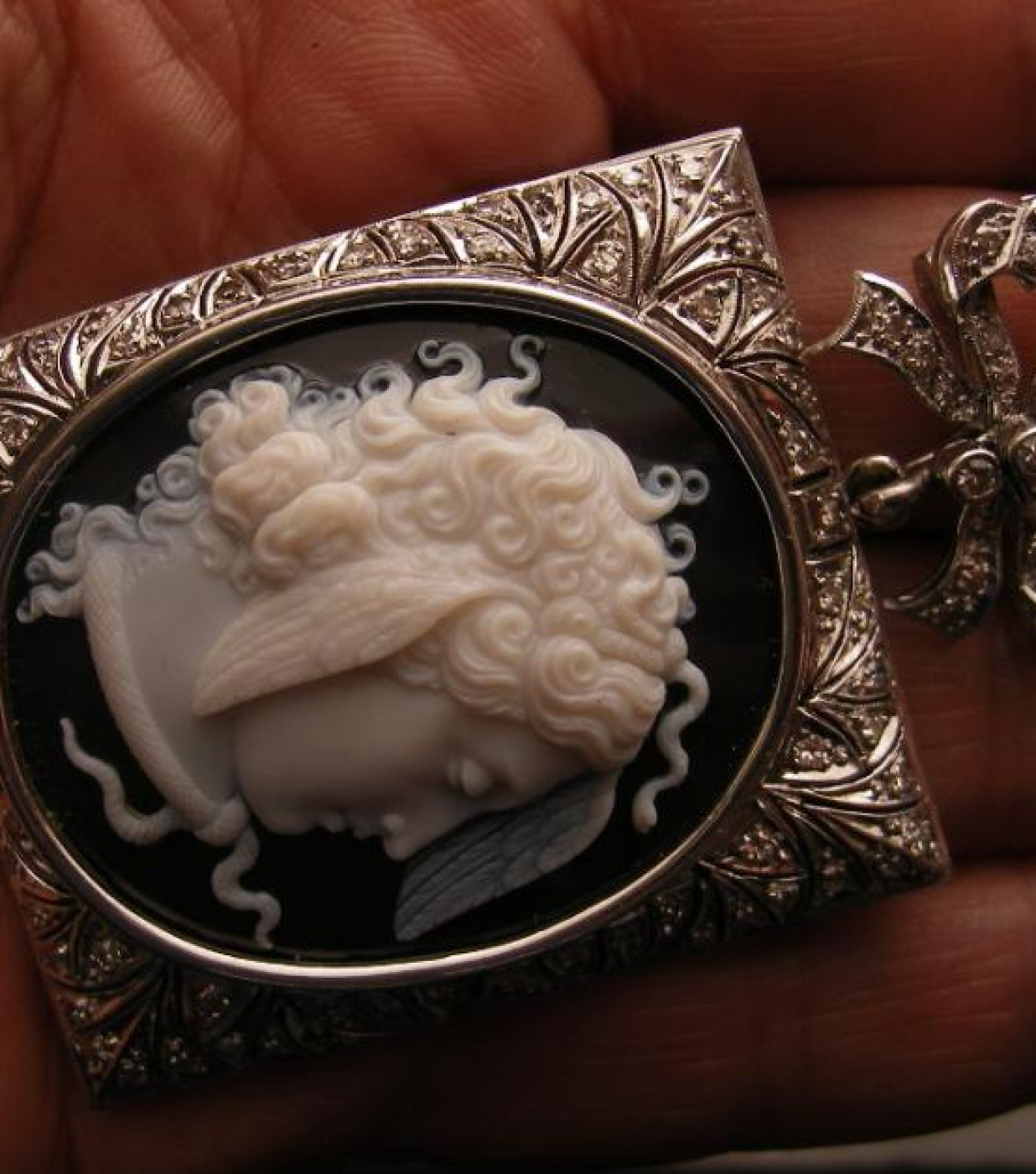 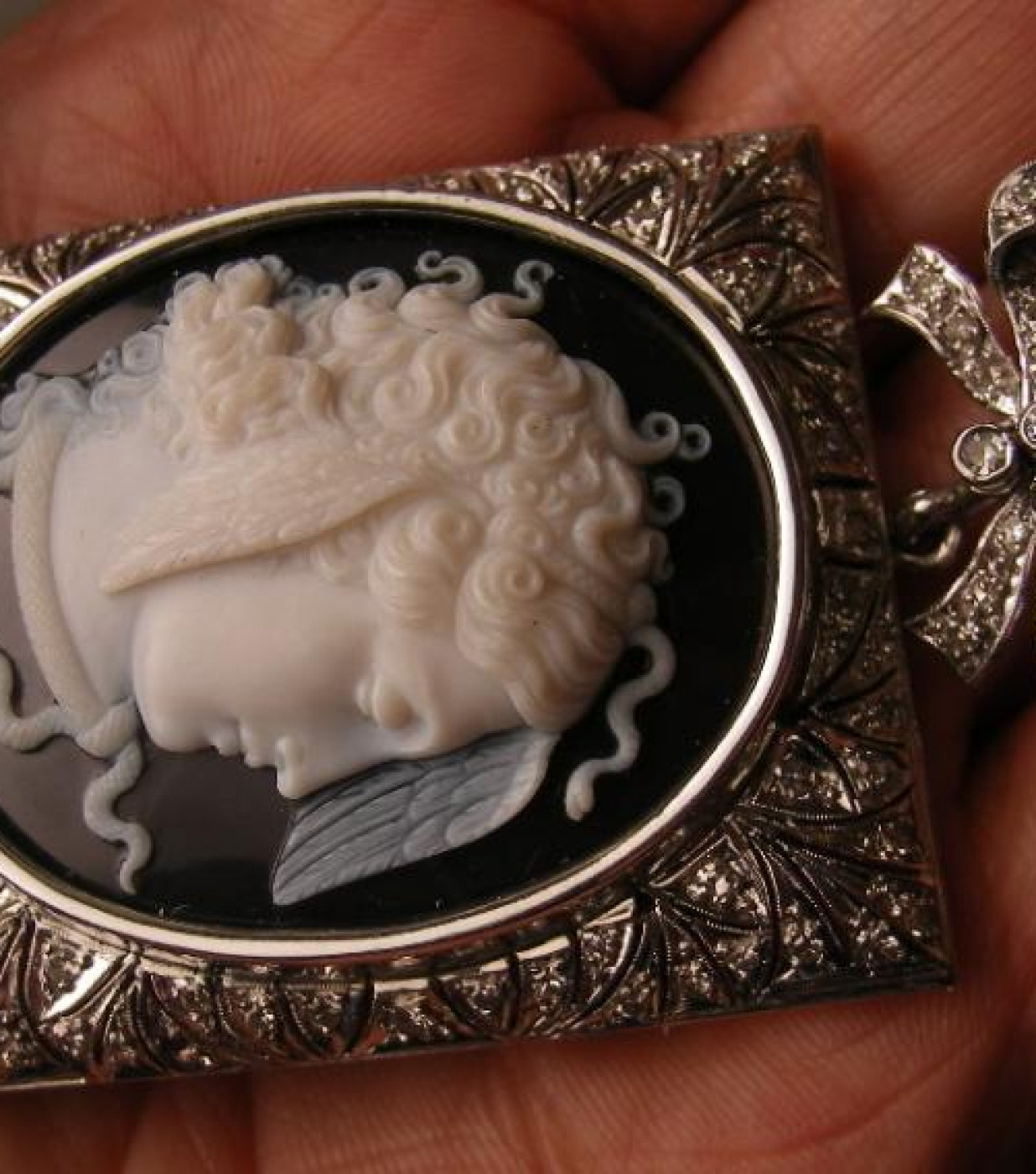 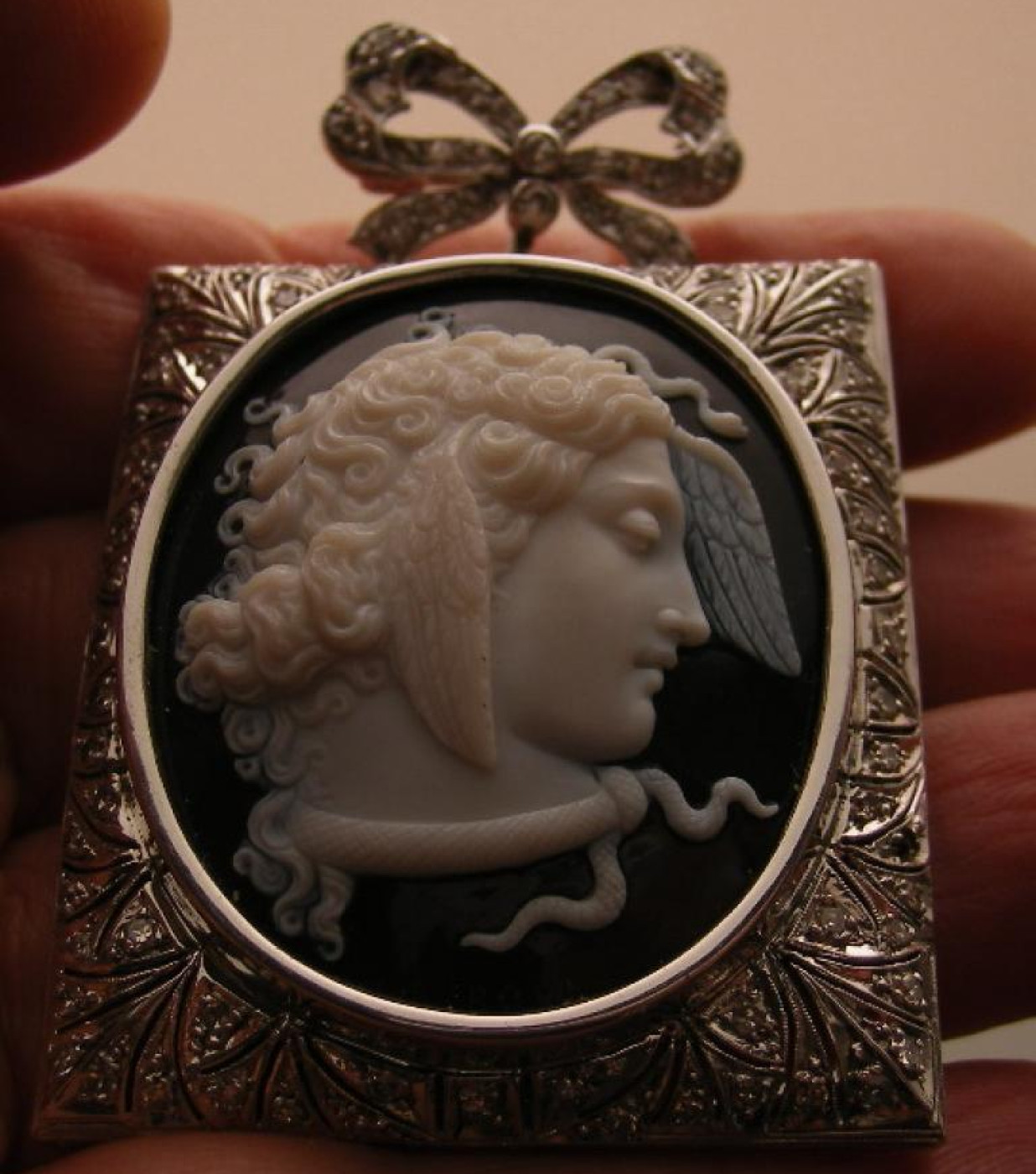 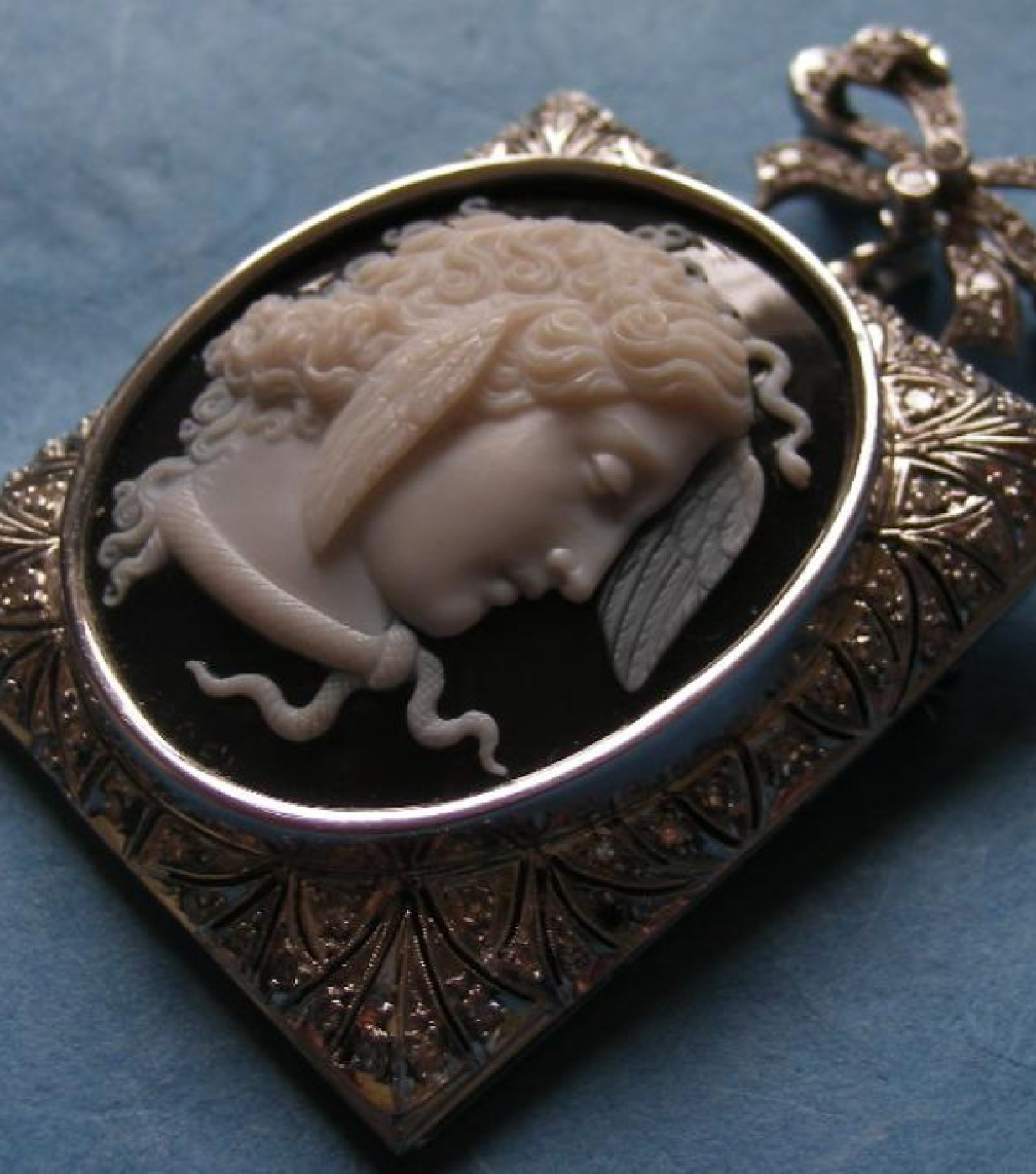 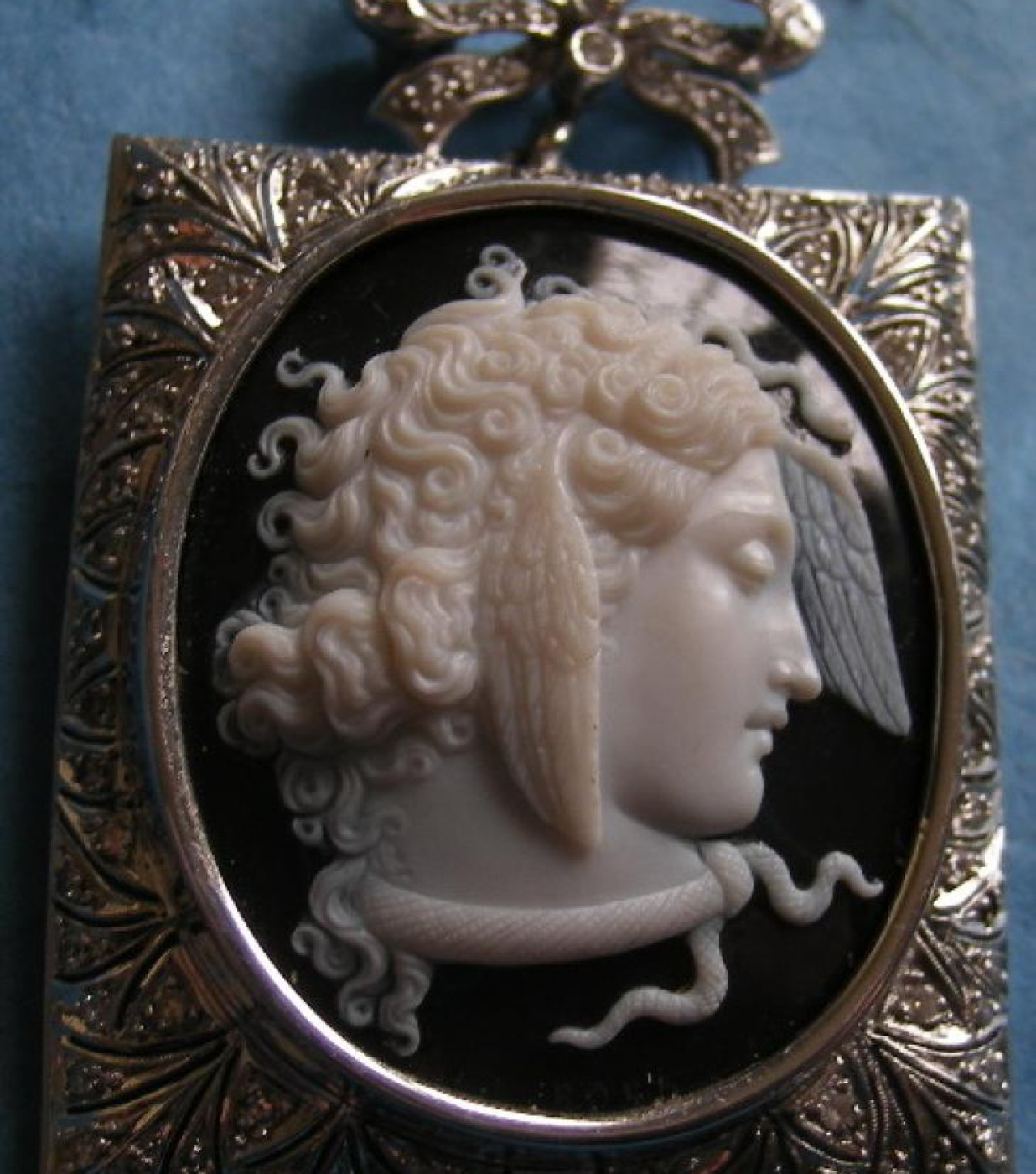 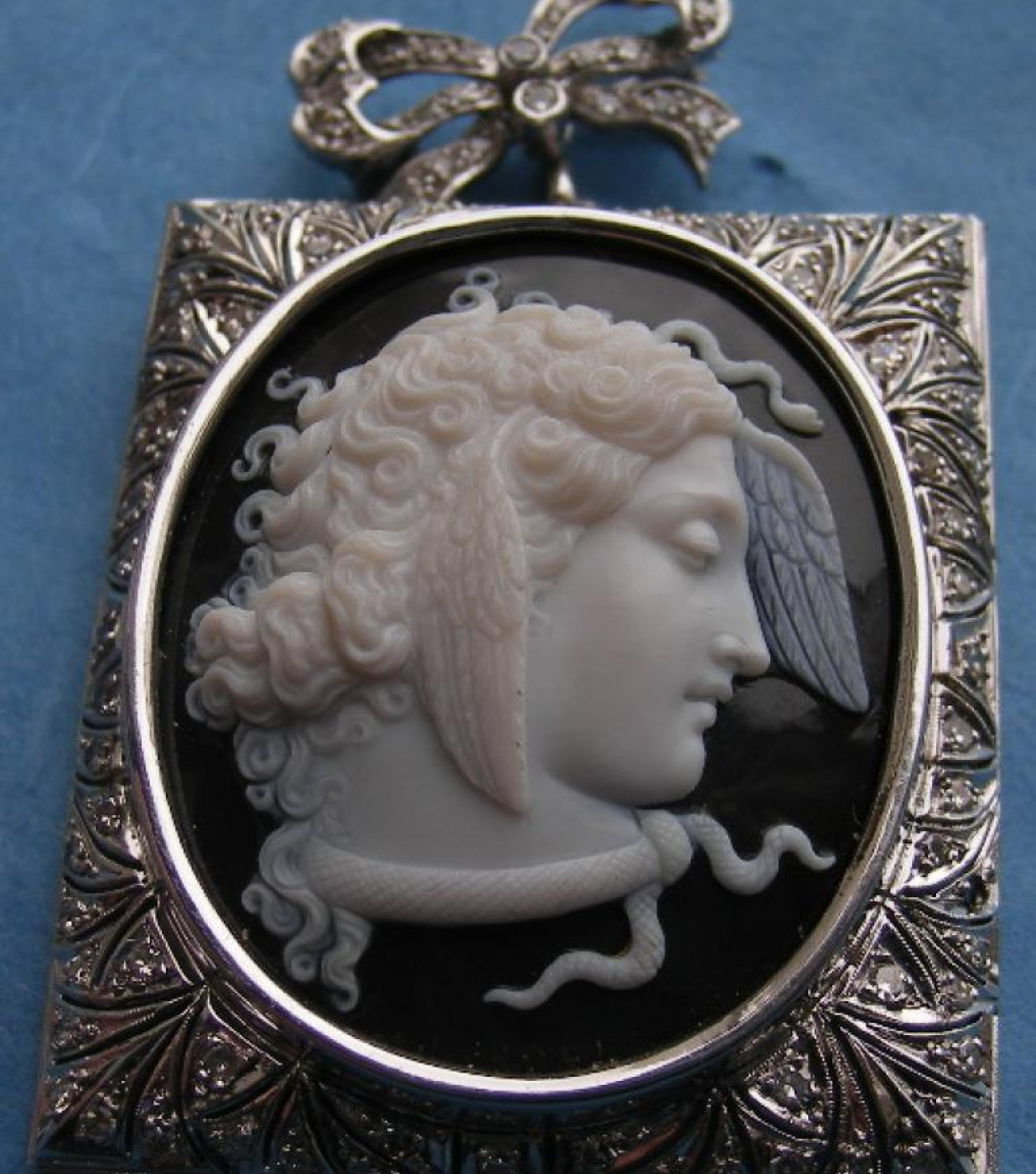 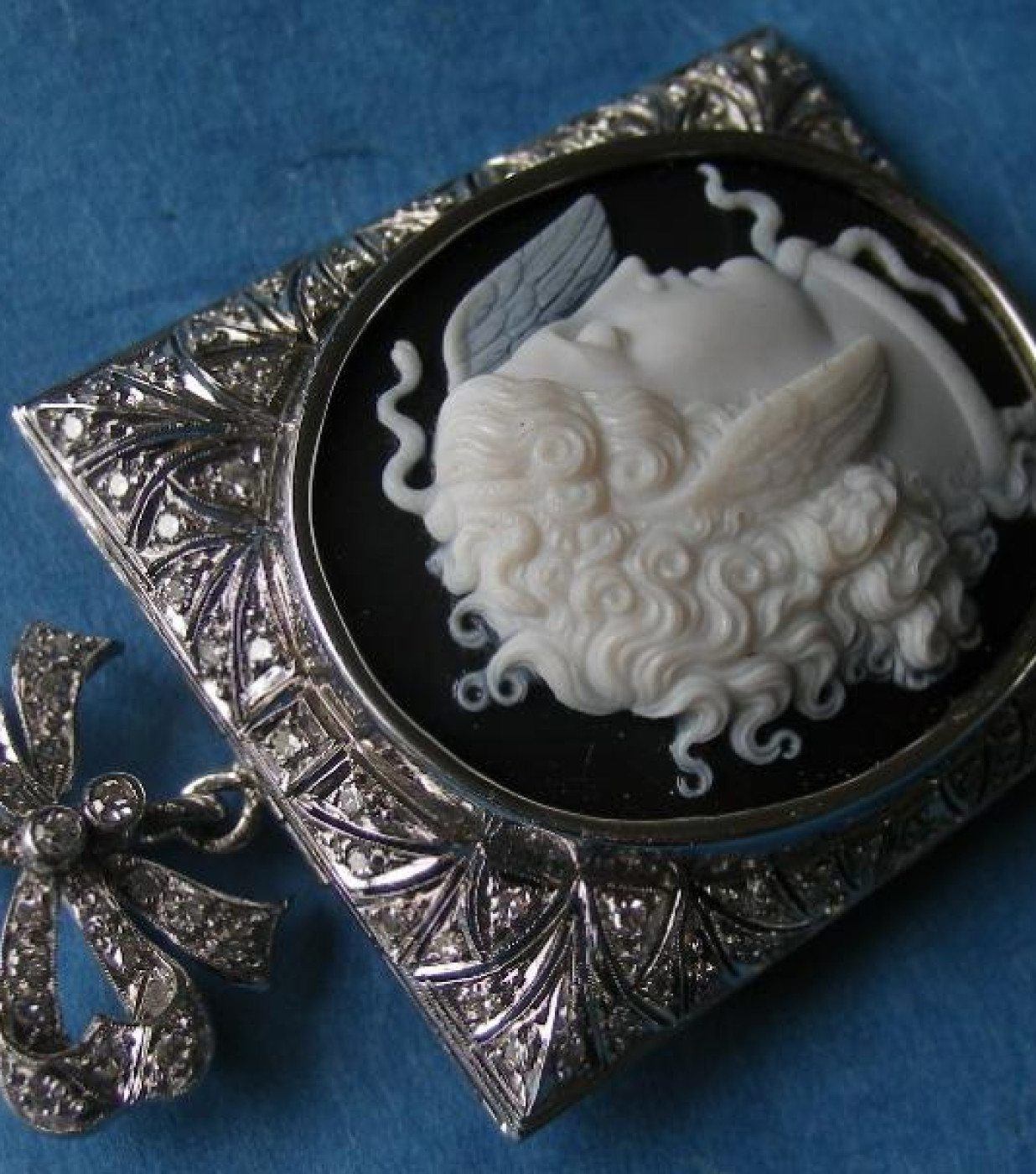 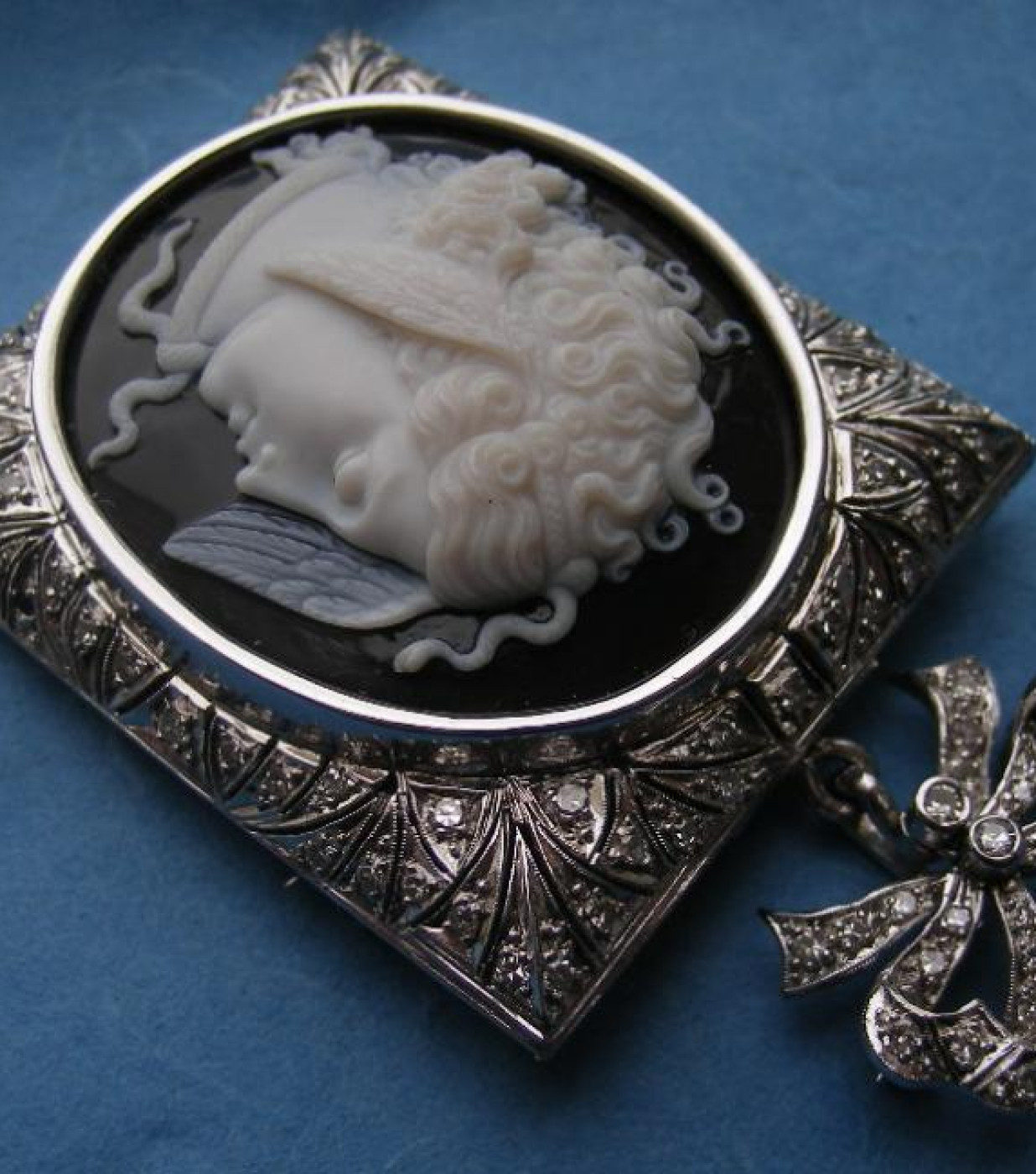 This is a more and more and more than museum quality HARDSTONE cameo of a Medusa and a wonderful real jewel. Circa 1850, signed Luigi Rosi that was a well known carver of the same level of the Saulinis. On the back there is scratched "Luigi Rosi, Roma, Piazza di Spagna, 86". Piazza di Spagna (one of most famous squares of Rome) was where he had his shop. Look at the expression of her face, so sad, her mouth a bit open, this is a real artwork. The frame is something of incredible too, I think it could be later than the cameo, 18 KT white gold tested, diamonds in old cut for circa 1 ct. The mounting is very particular because the bow pin on the top can be detached and worn alone and the cameo too can be worn with or without the bow. When the bow pin is closed the cameo can't be detached, so it is safe to be worn. There is a diamond missed, easy to replace, but not noticeable between all of them, there are 91 diamonds. When the light go over them, you can see a wonderful light effect, they are so sparkling and brilliant. This is an incredible work of art,  very detailed cameo, carved and signed by an artist. Rarest cameo and subject very desirable collectors' piece.
A bit of history:
Medusa is a  character of Greek's mythology, she was one of three Gorgons, the only one that was mortal. Poseidon fell in love with Medusa and one night he took her in a temple consecrated to Athena to consummate their love. Athena offended, transformed Medusa's hair into snakes and again everyone that had looked Medusa's eyes would have been petrified. Medusa was killed by Perseus who cut her head looking at her through a bright shield received from Athena. From Medusa's body came out Pegasus, the mythic winged horse, and Crisaore generated with the union with Poseidon. For this reason Medusa's head was given by Perseus to Athena who put it in the center of her aegis. Aegis used by Athena, is a fringed armour or a shield with Medusa's head in the center.