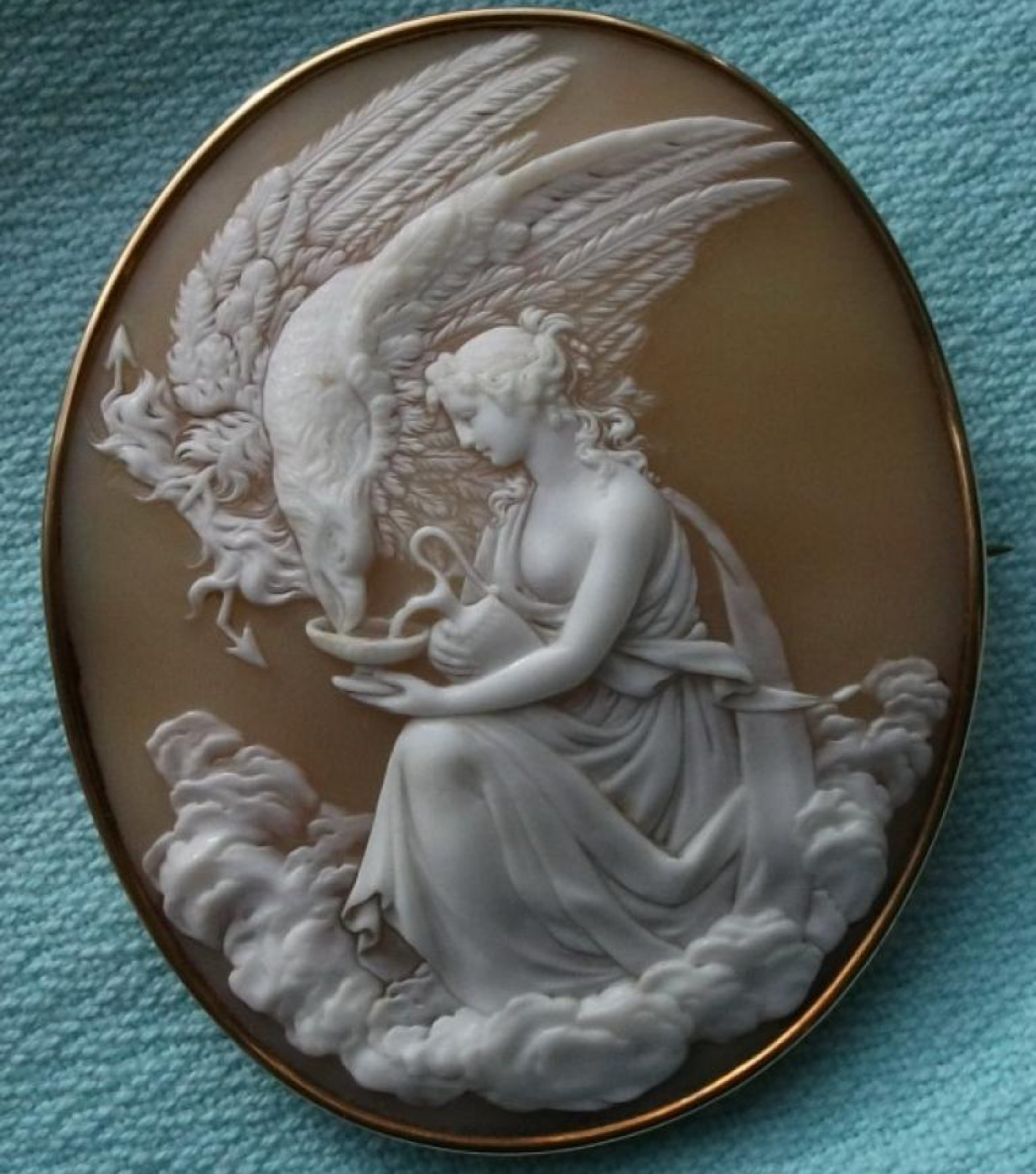 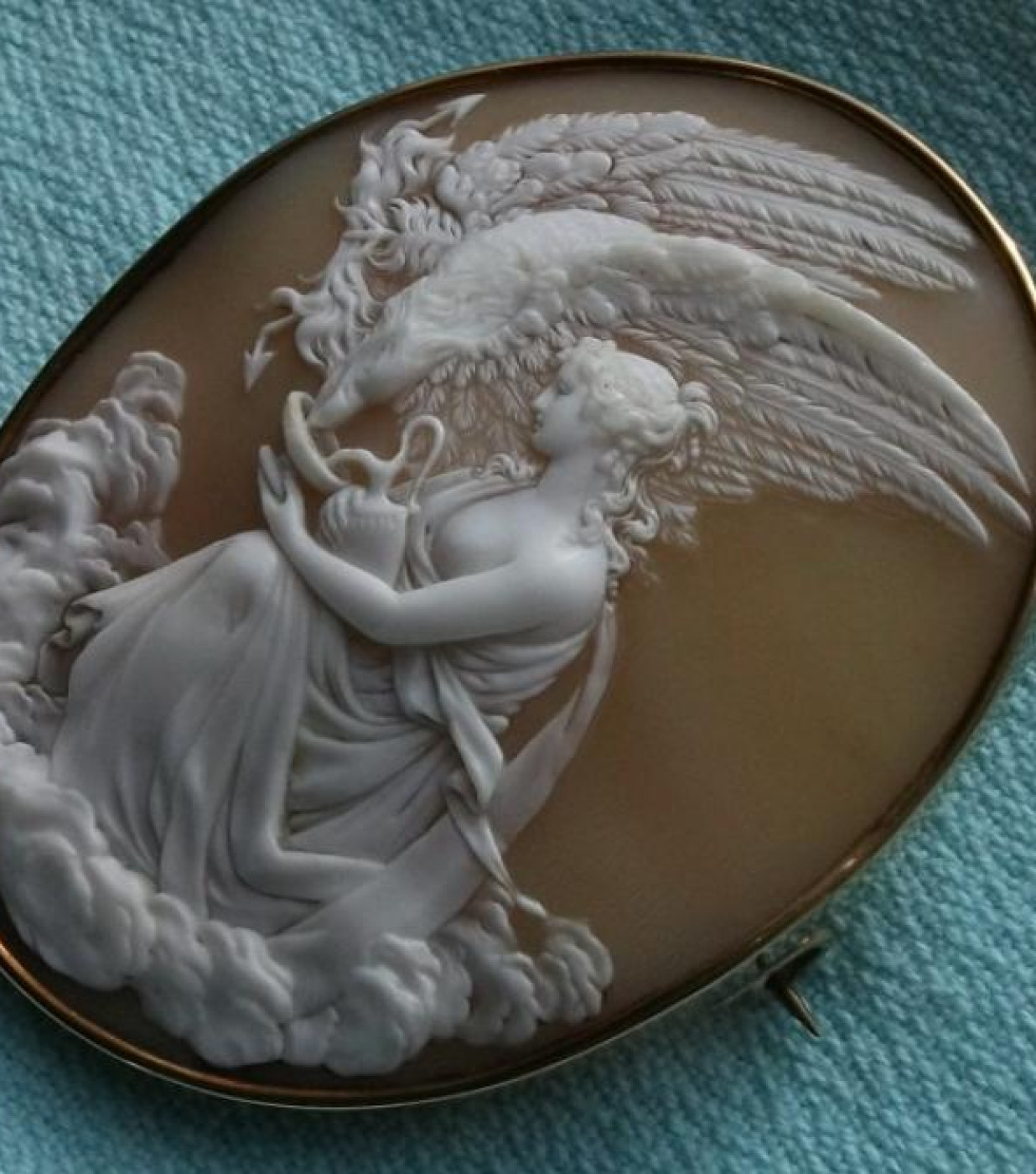 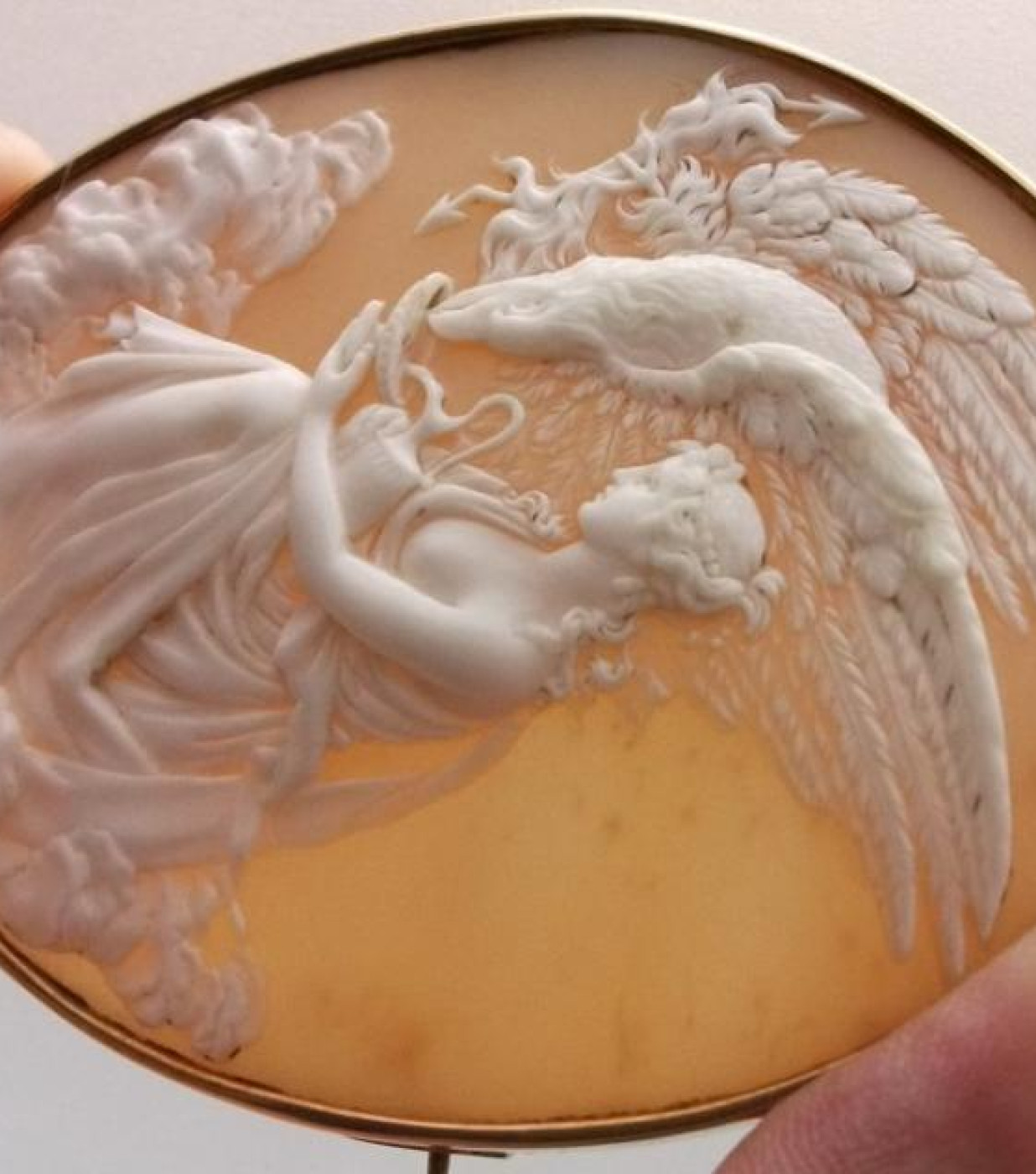 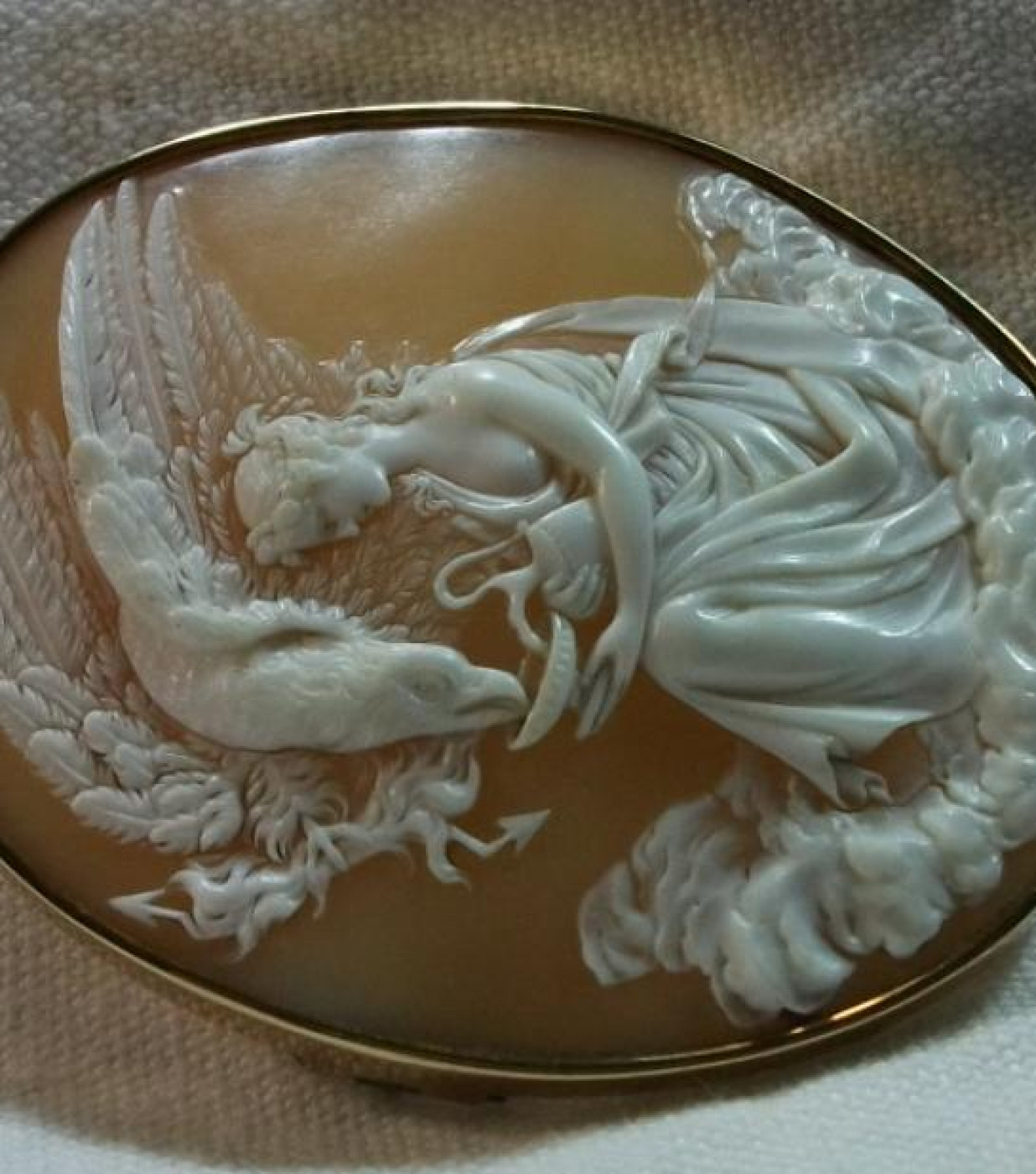 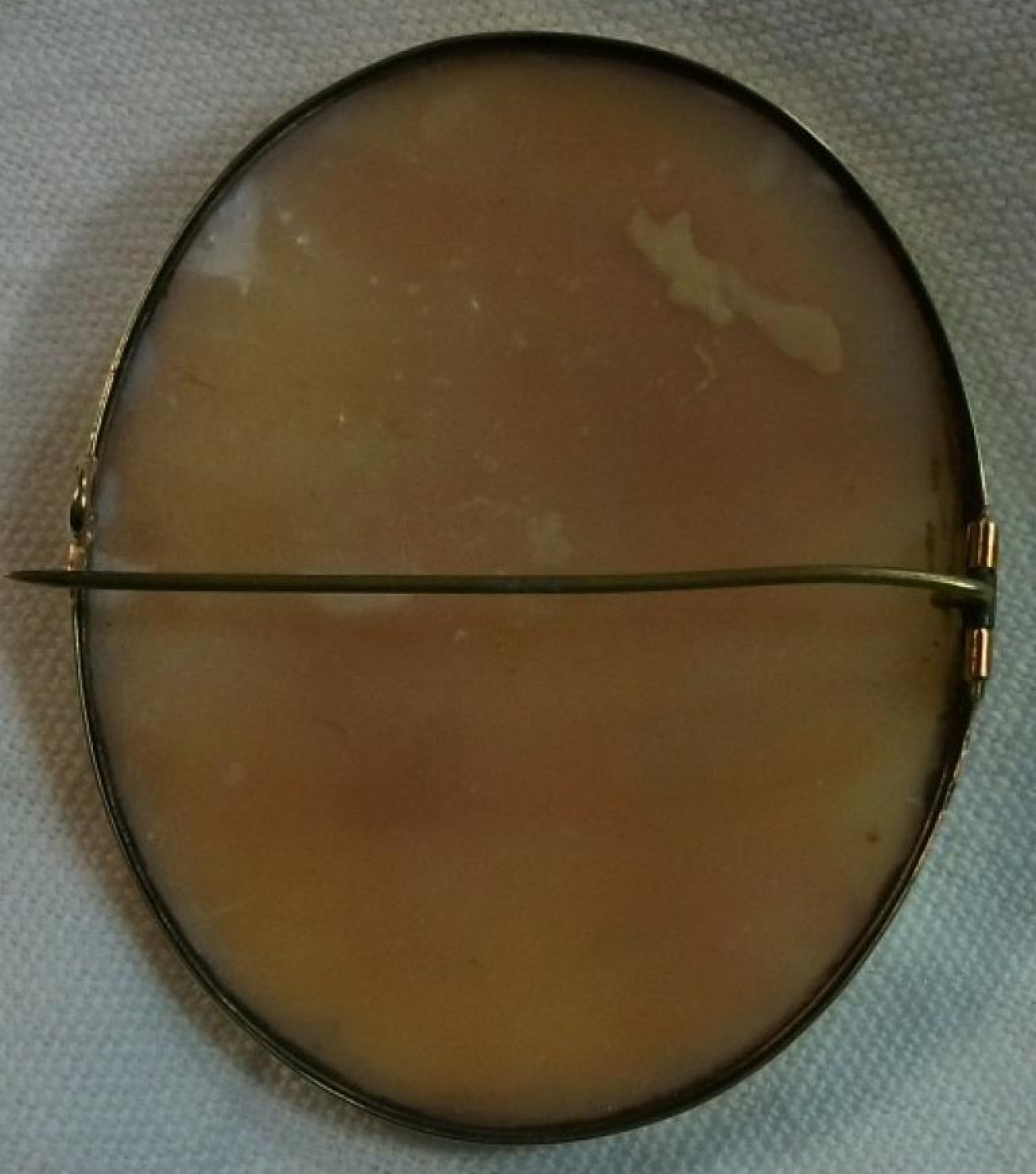 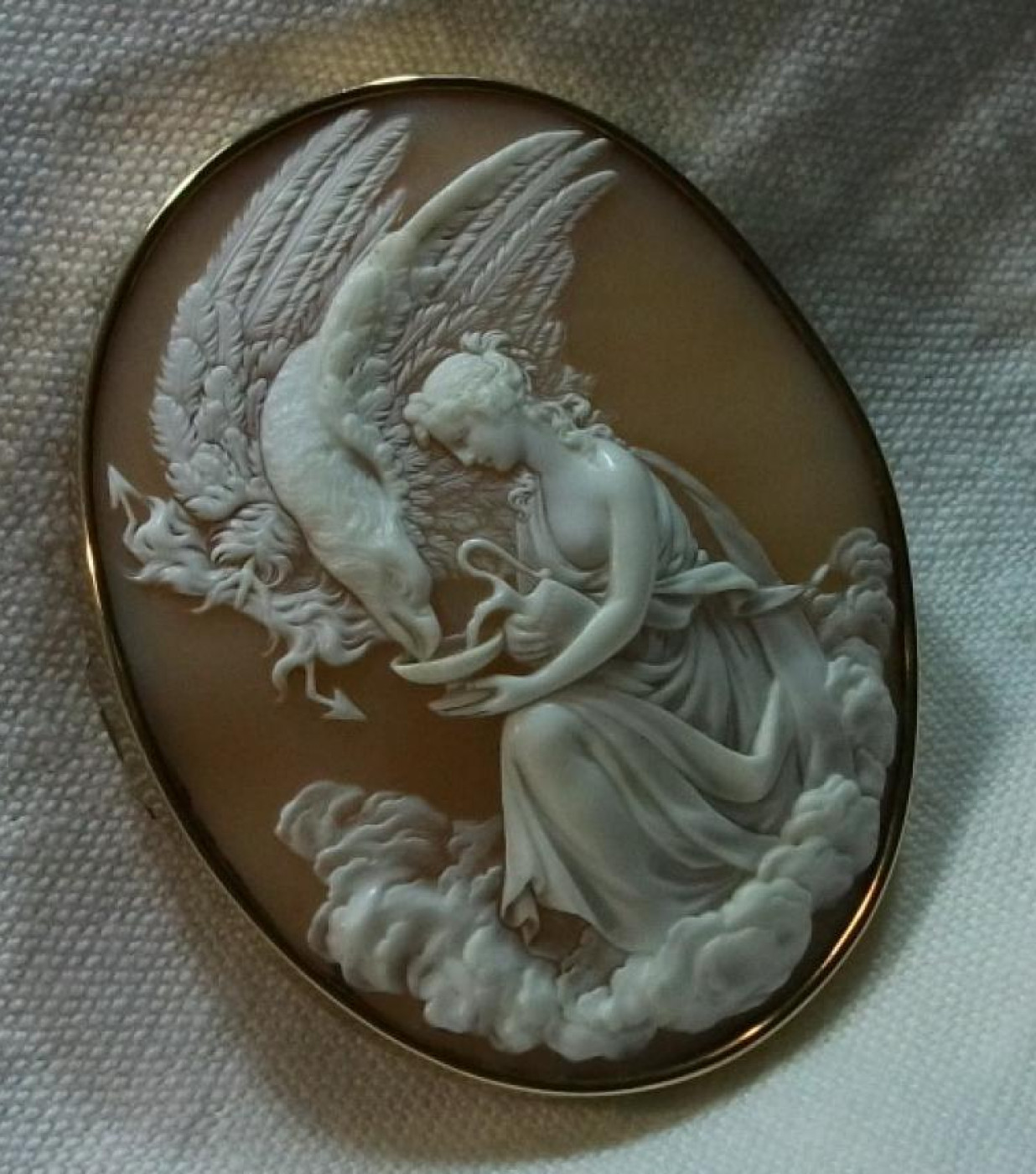 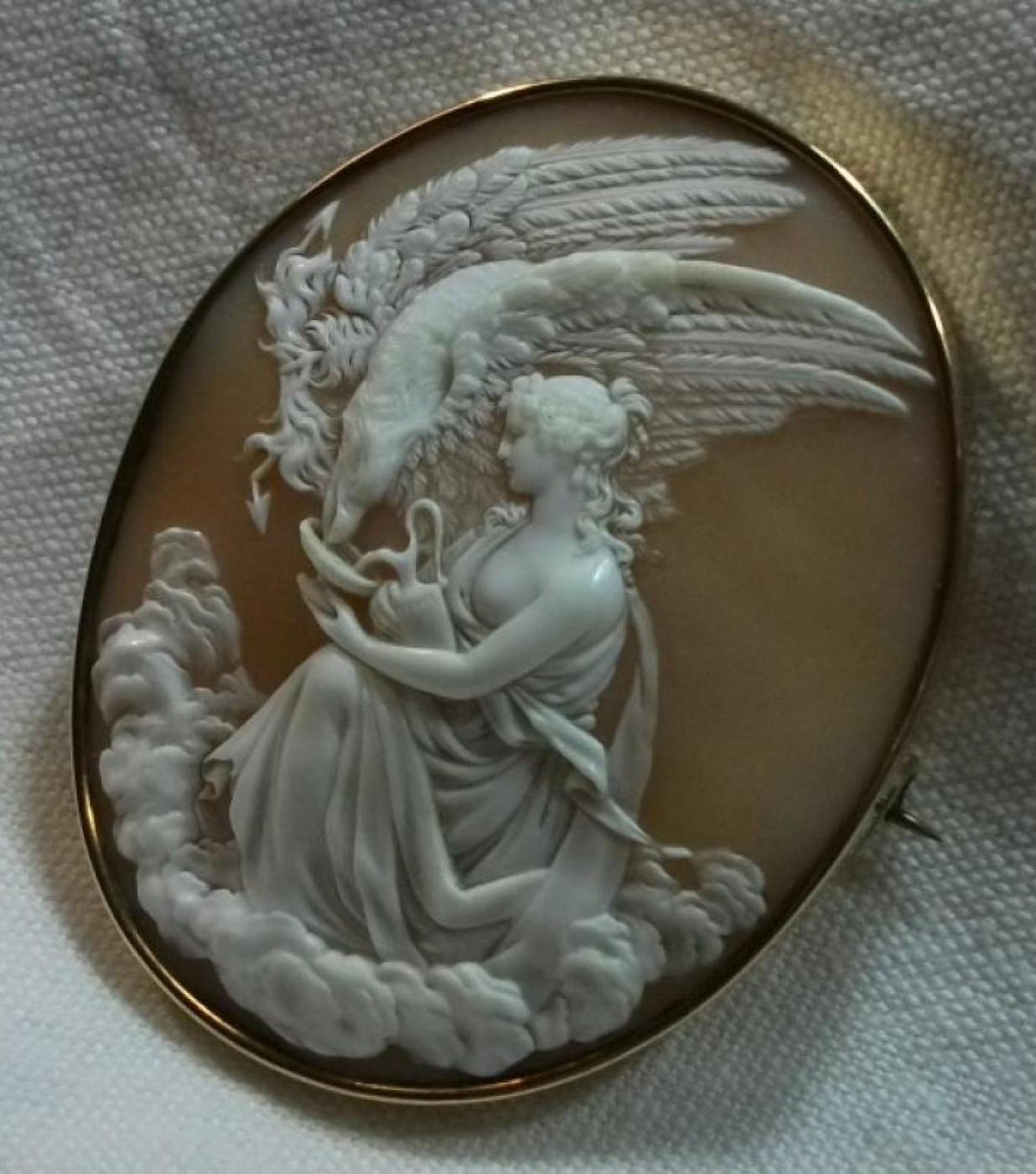 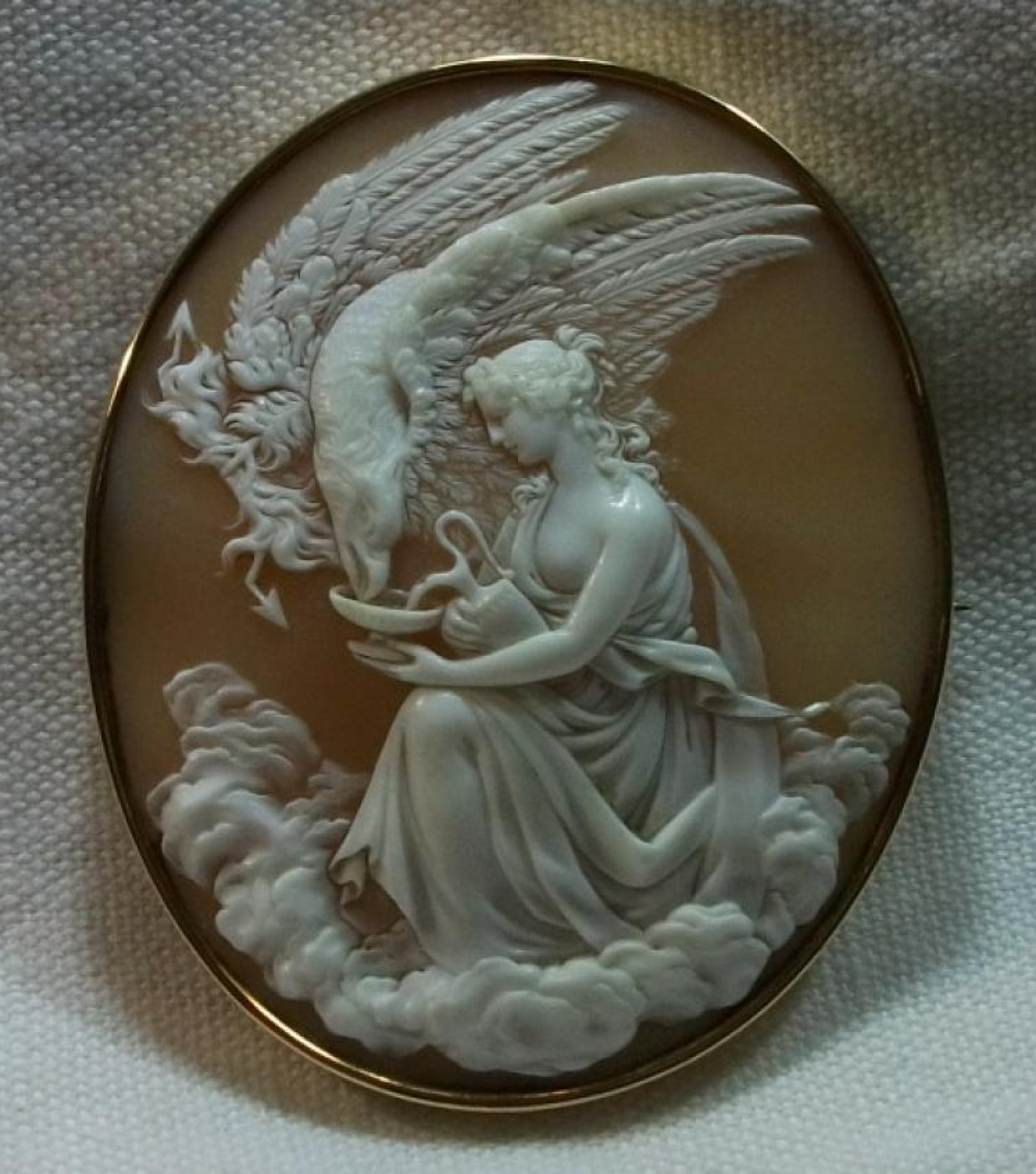 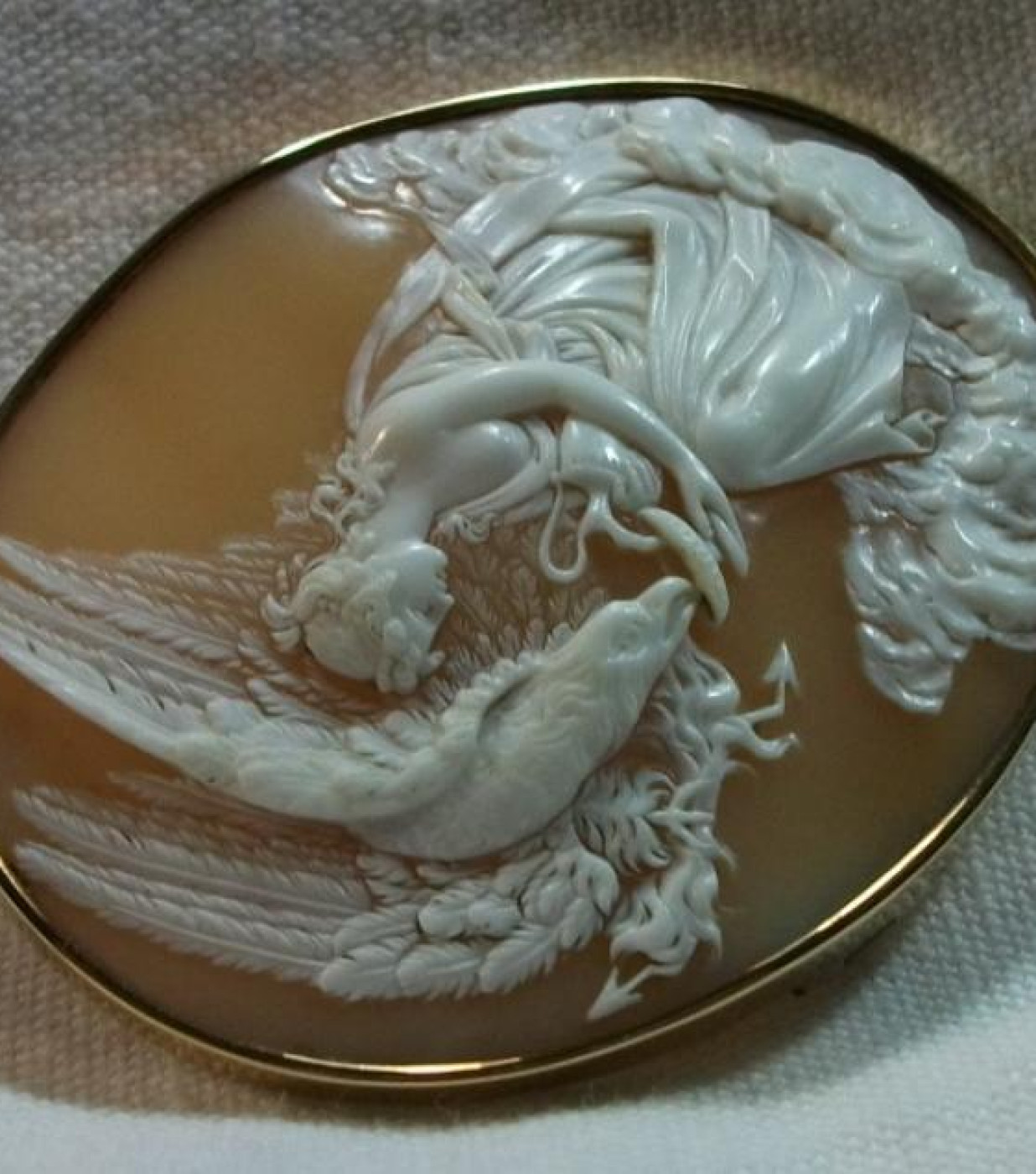 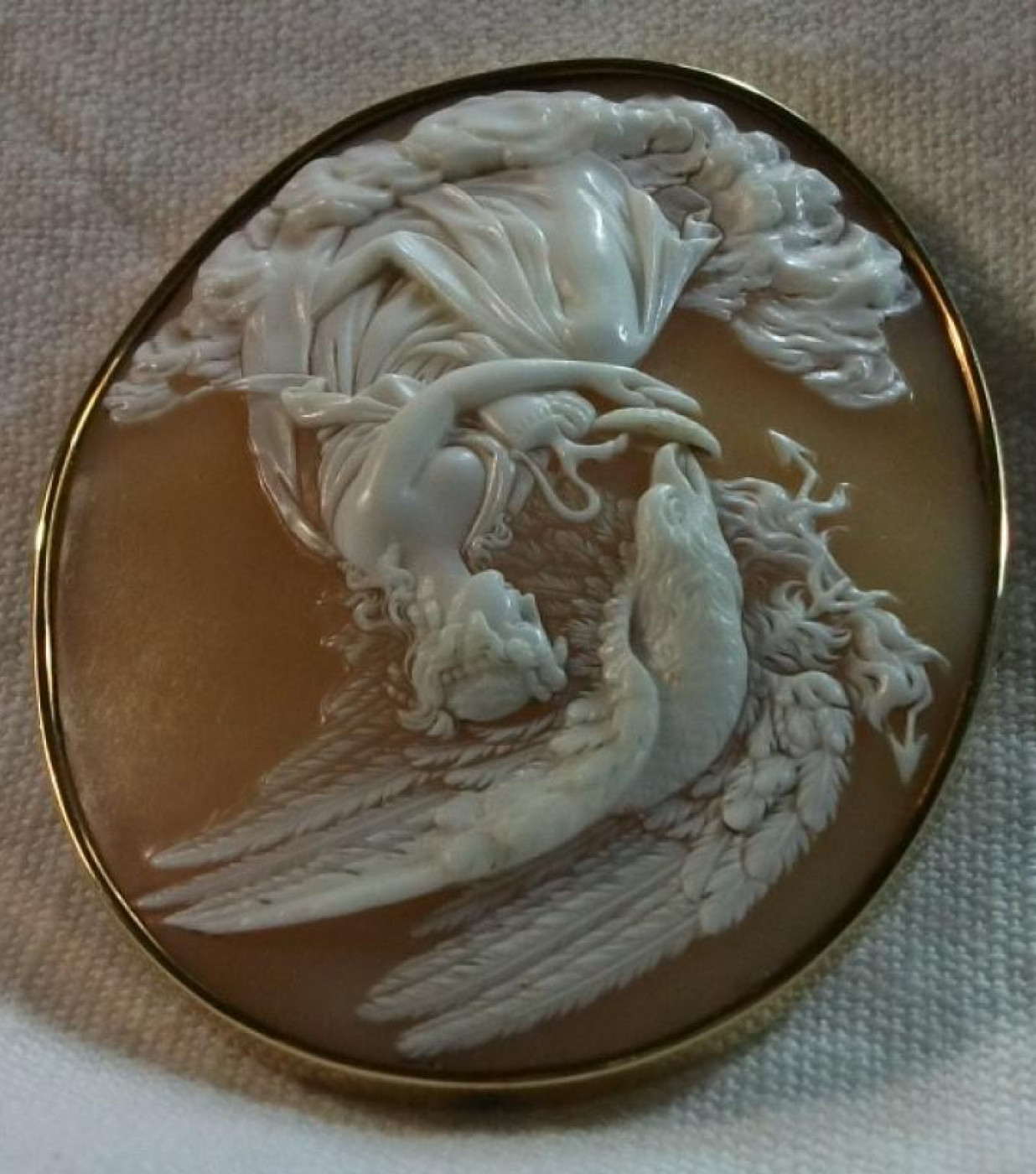 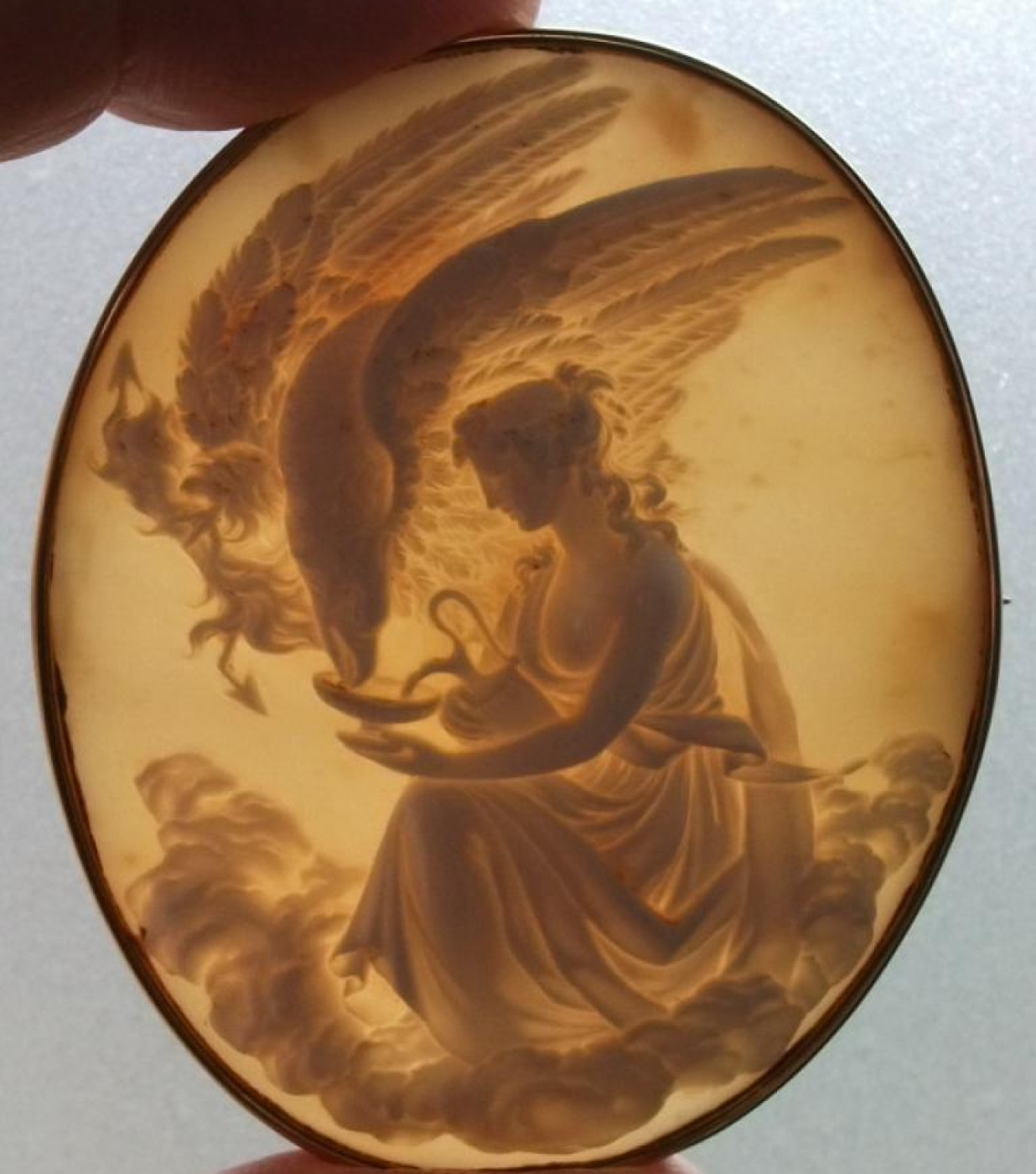 Museum Quality of Hebe feeding the eagle of Zeus.  This subject is rare because I have never seen Hebe so carved. Note the thunderbolts held by the eagle, which are another symbol of Zeus. The carving is more than perfect in every detail.  The delicacy of this piece is truly amazing.  Hebe wears an ethereal dress and look how the dress' folds are made, also look at the eagle's wings, every feather is carved and wonderfully. I also think that I have never seen clouds so masterly made on a cameo, note how the Hebe's dress disappears into the cloud. The shell is perfect, no lines at all. The frame is simple and elegant. This subject is amazing, everything is so realistic.   This is one of most beautiful cameos I have ever seen, the pictures speak by themselves. This is another masterly carved cameo. A very desirable collectors piece, rare and museum quality cameo.
A bit of History:

In Greek mythology, Hebe is the goddess of youth (Roman equivalent: Juventas). She is the daughter of Zeus and Hera. Hebe was the cupbearer for the gods and goddesses of Mount Olympus, serving their nectar and ambrosia, until she was married to Herakles (Roman equivalent: Hercules); her successor was the young Trojan prince Ganymede. Another title of hers, for this reason, is "Ganymeda." She also drew baths for Ares and helped Hera enter her chariot. Hebe had two children with her husband Heracles: Alexiares and Anicetus. The name Hebe comes from a Greek word meaning "youth" or "prime of life". Juventas likewise means "youth", as can be seen in such derivatives as juvenile. In art, Hebe is usually depicted wearing a sleeveless dress. There is a statue of Hebe, by Robert Thomas 1966 in Birmingham city centre, England. Antonio Canova also sculpted four different statues of Hebe: one of them is in the Museum of Forlì, in Italy.