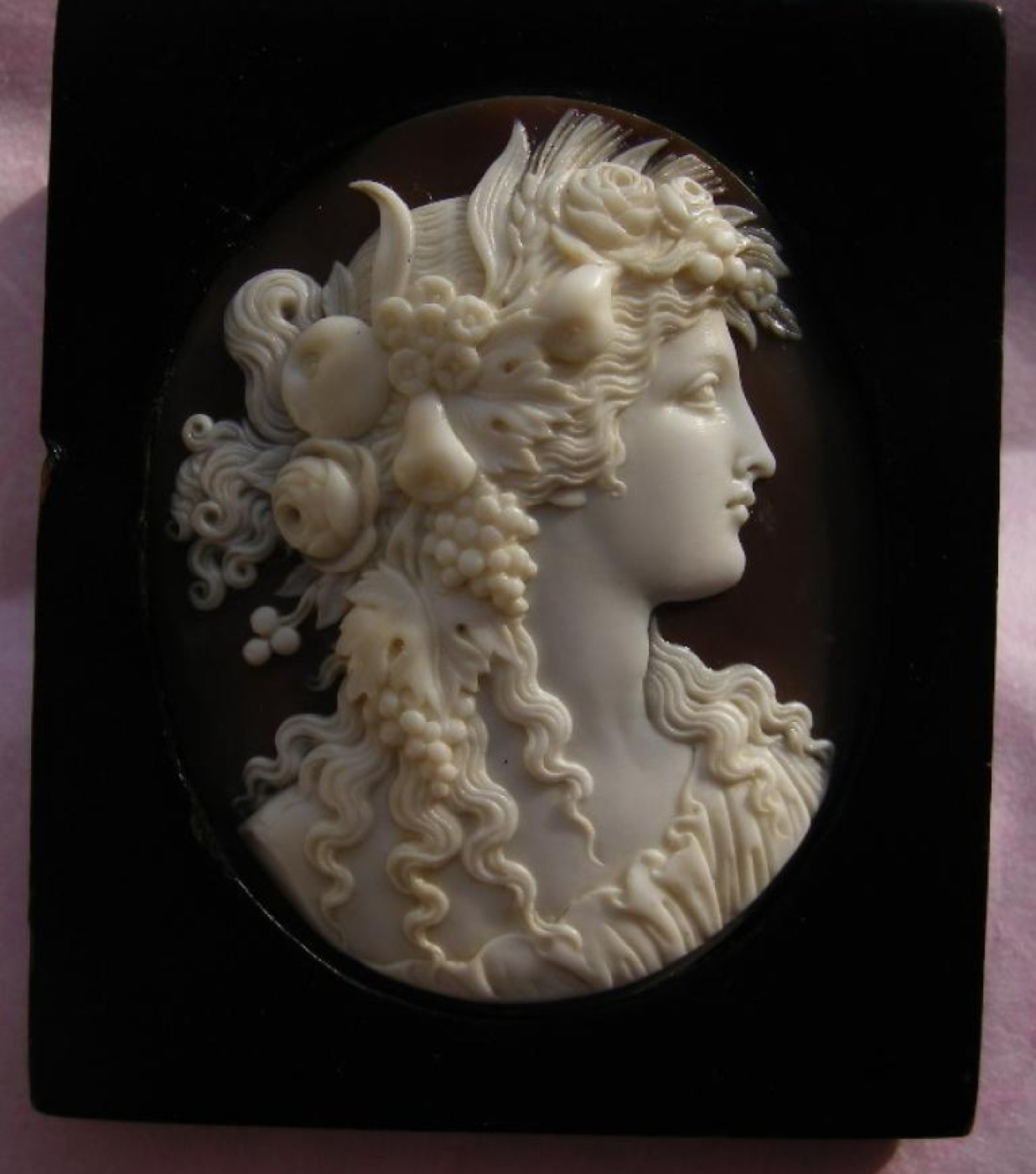 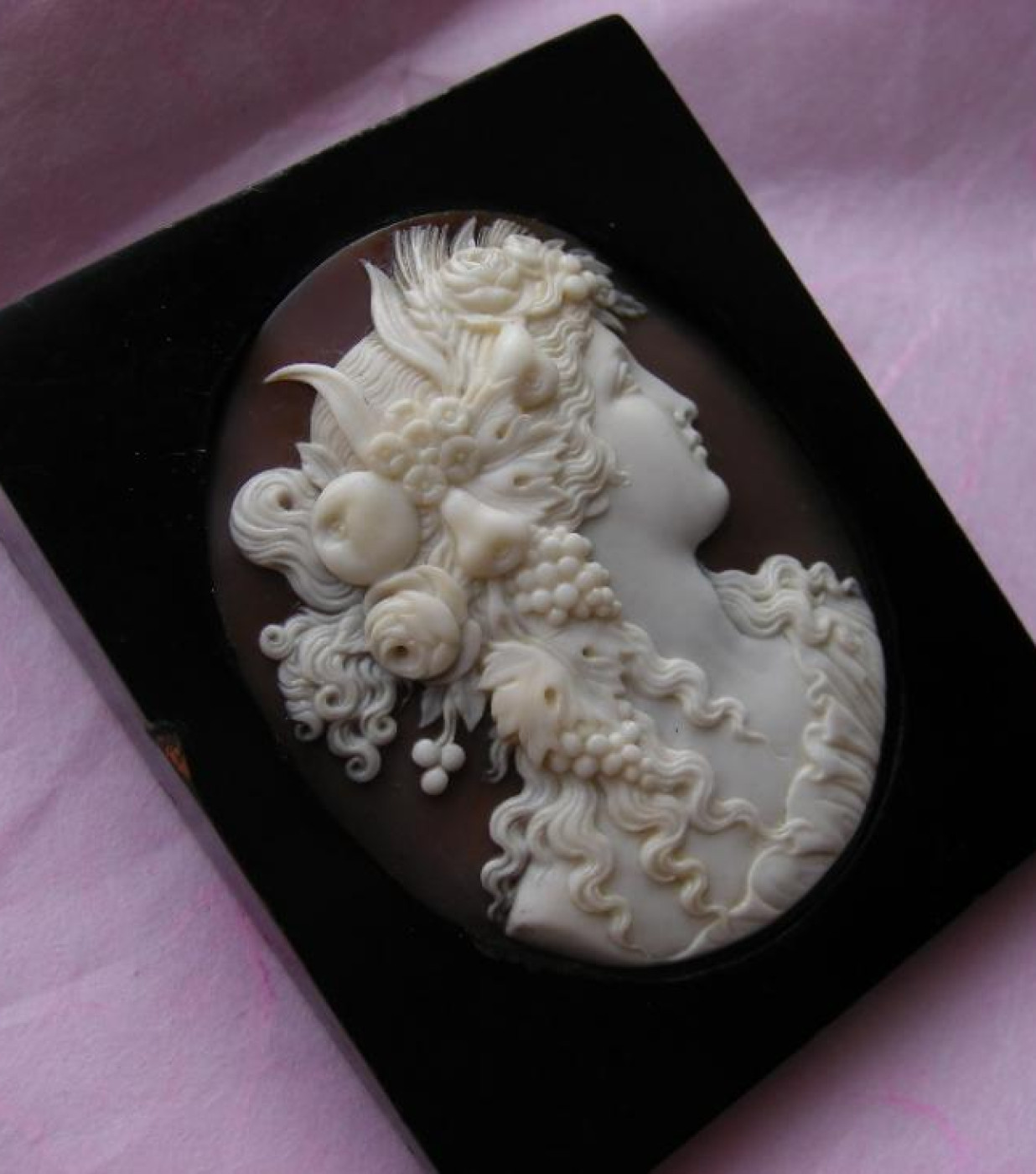 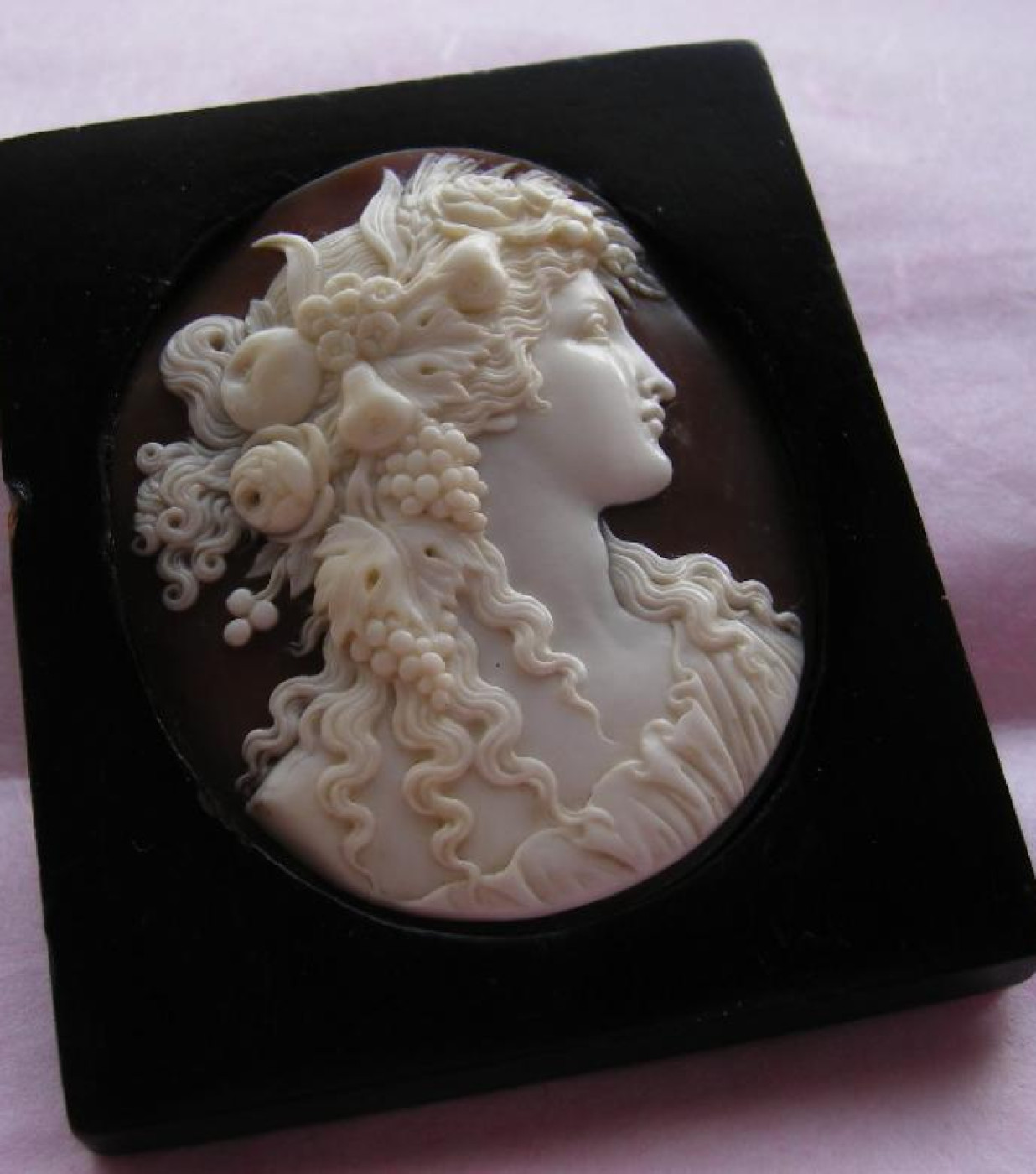 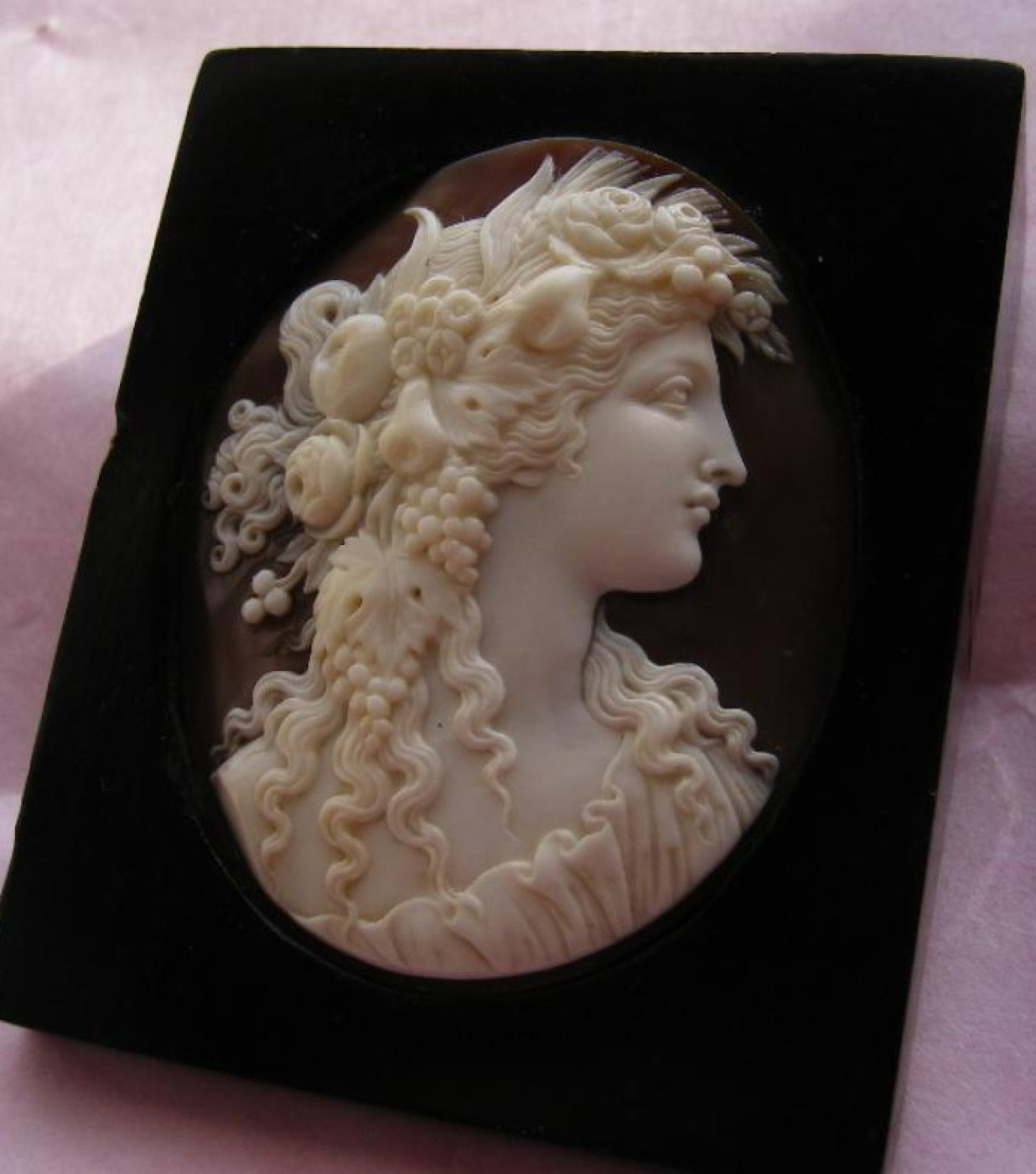 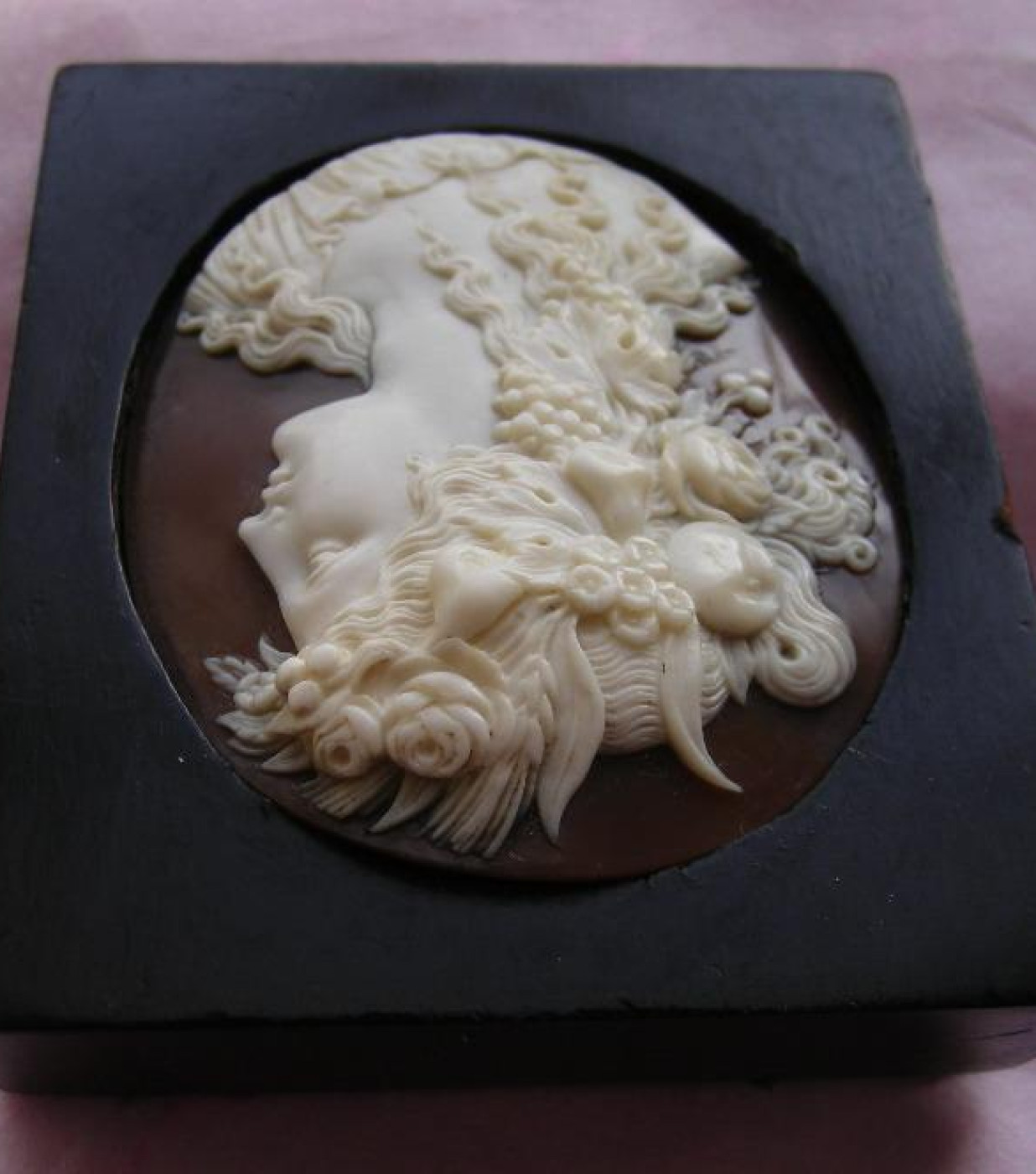 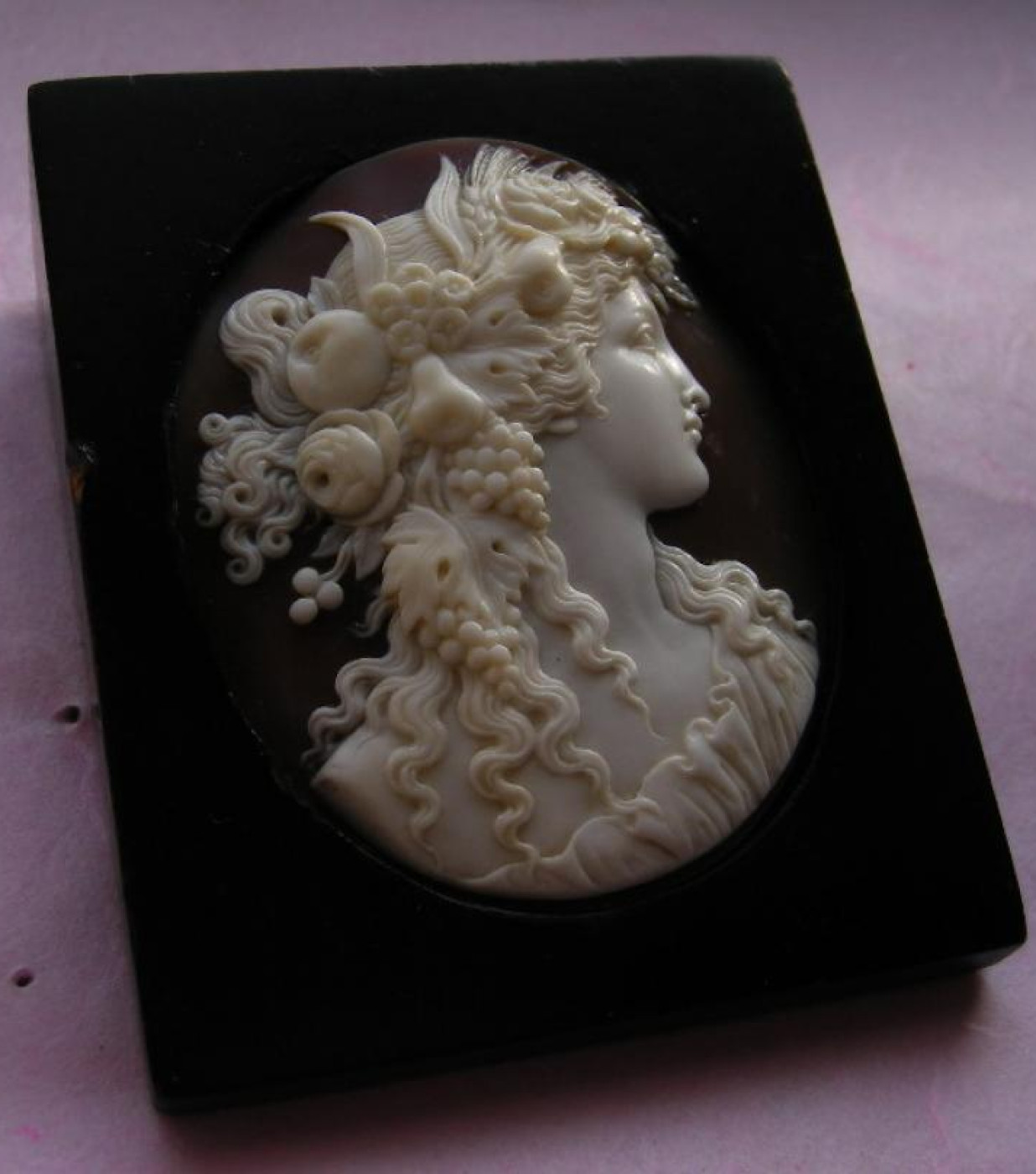 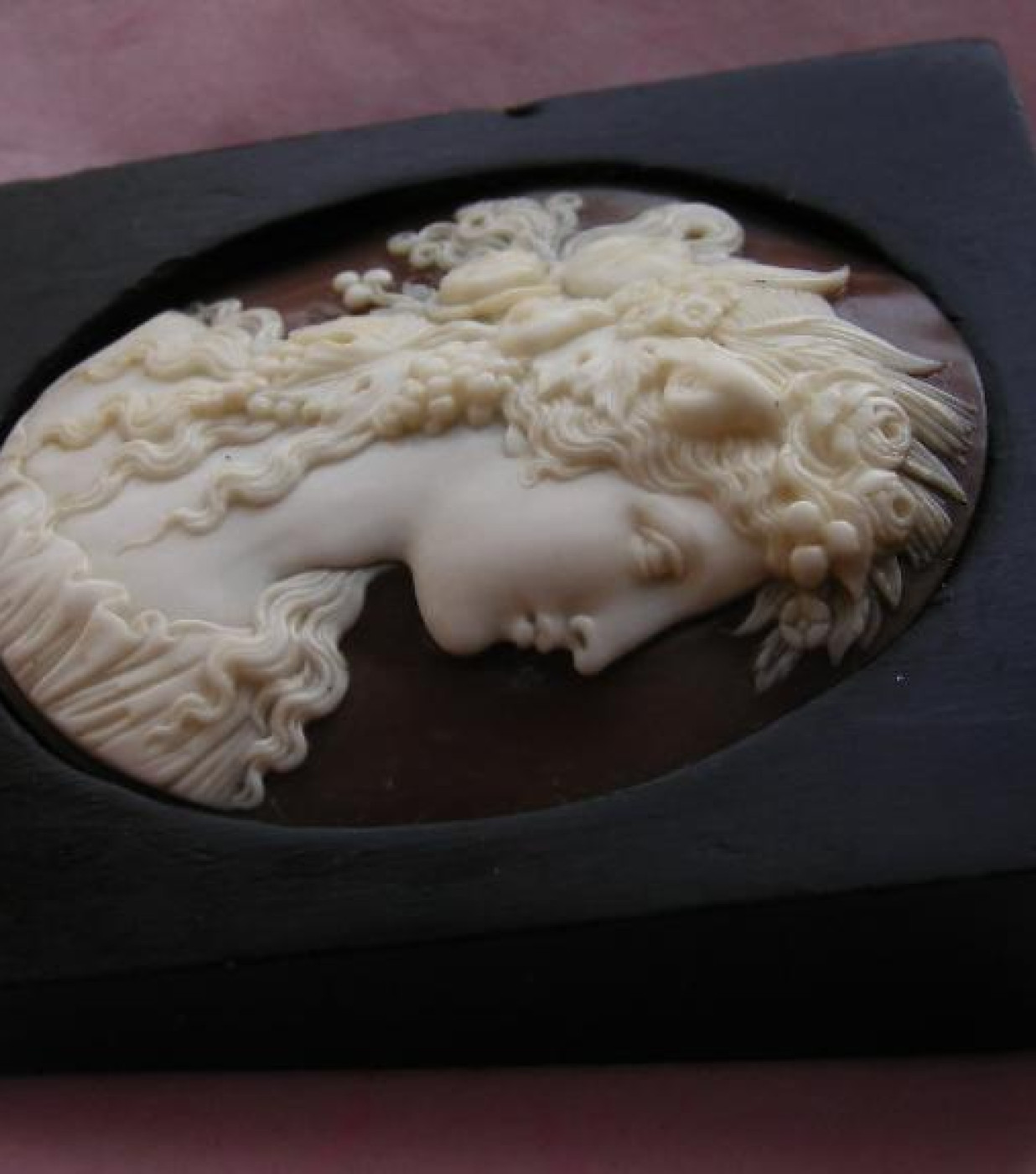 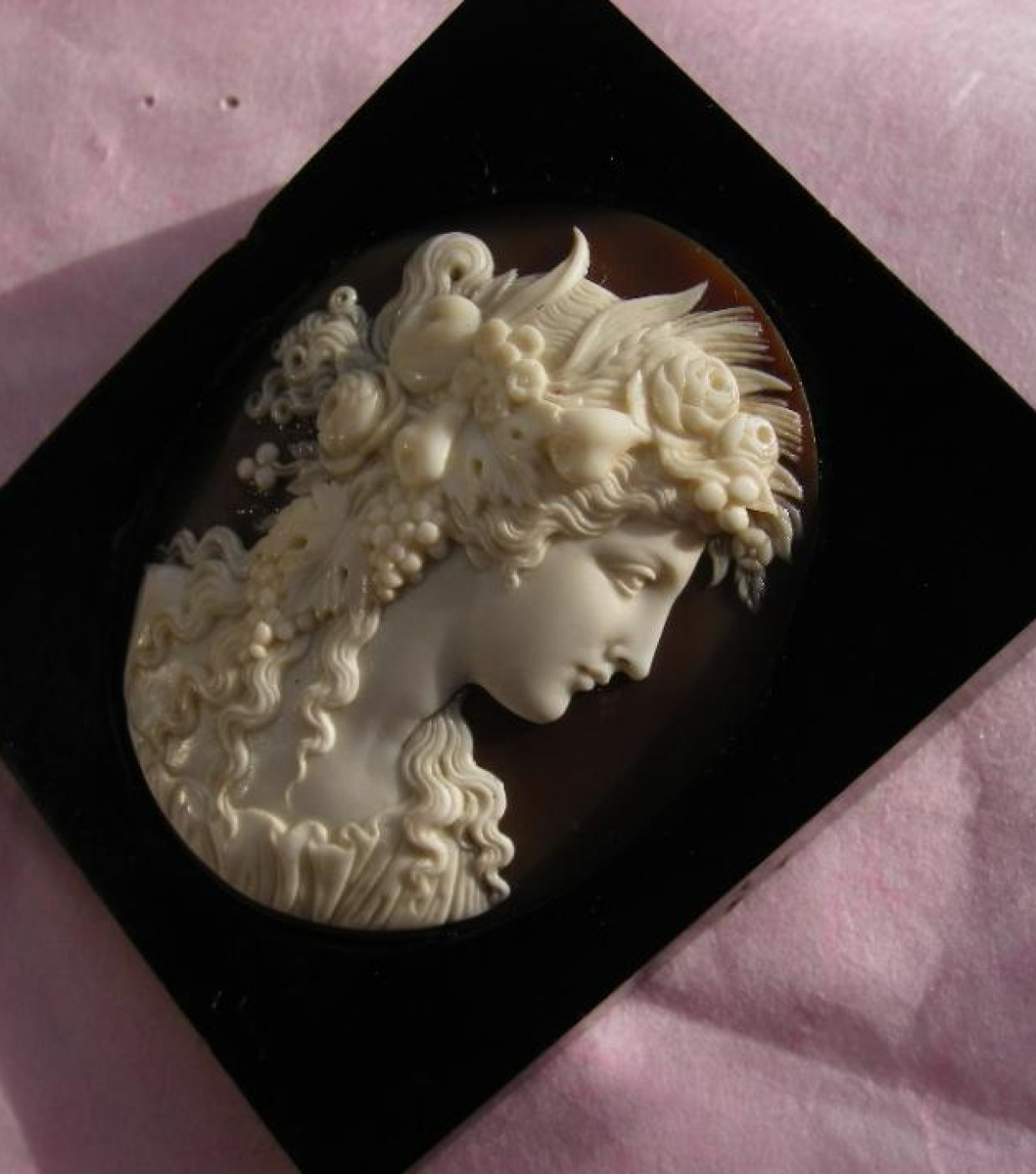 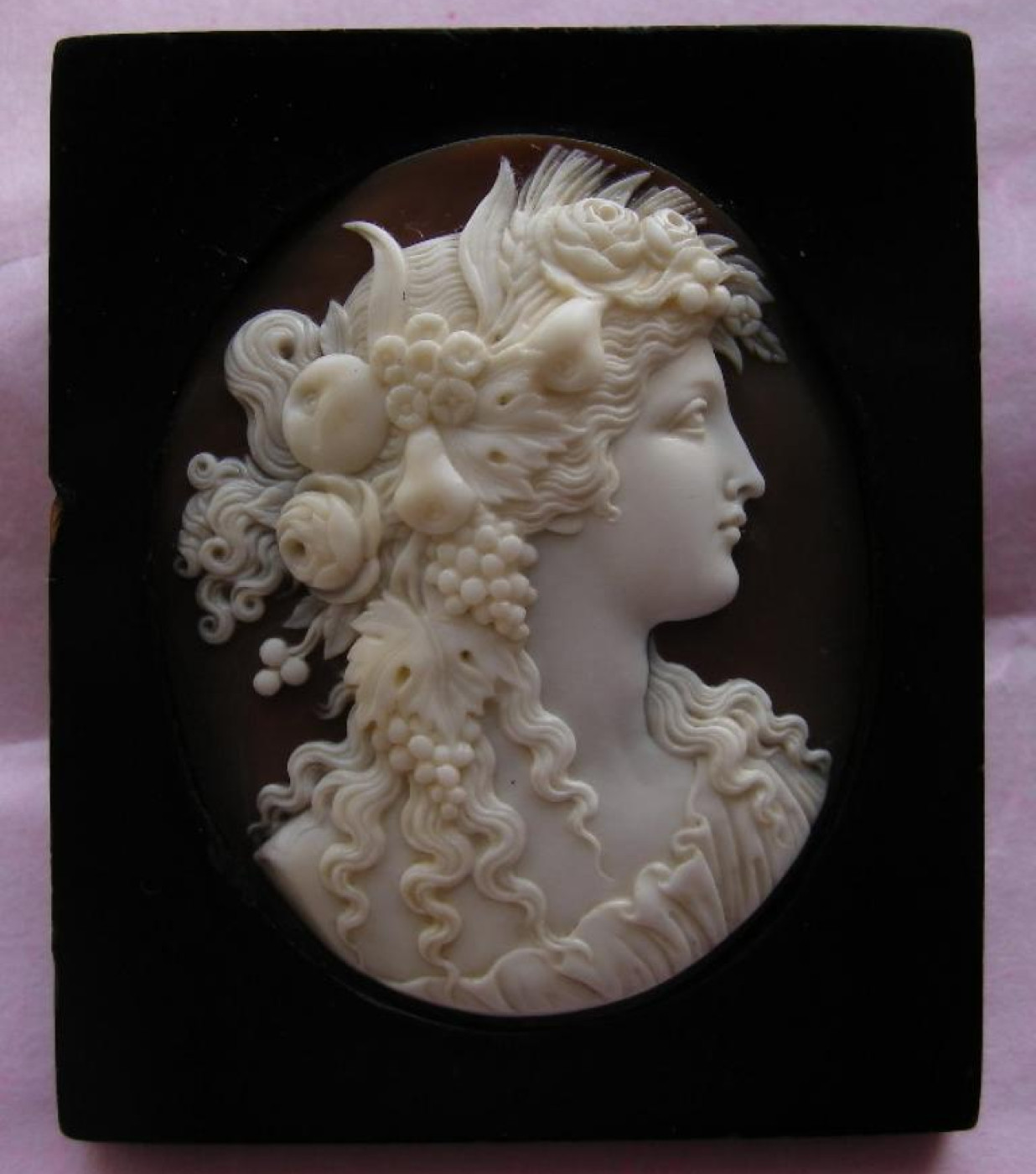 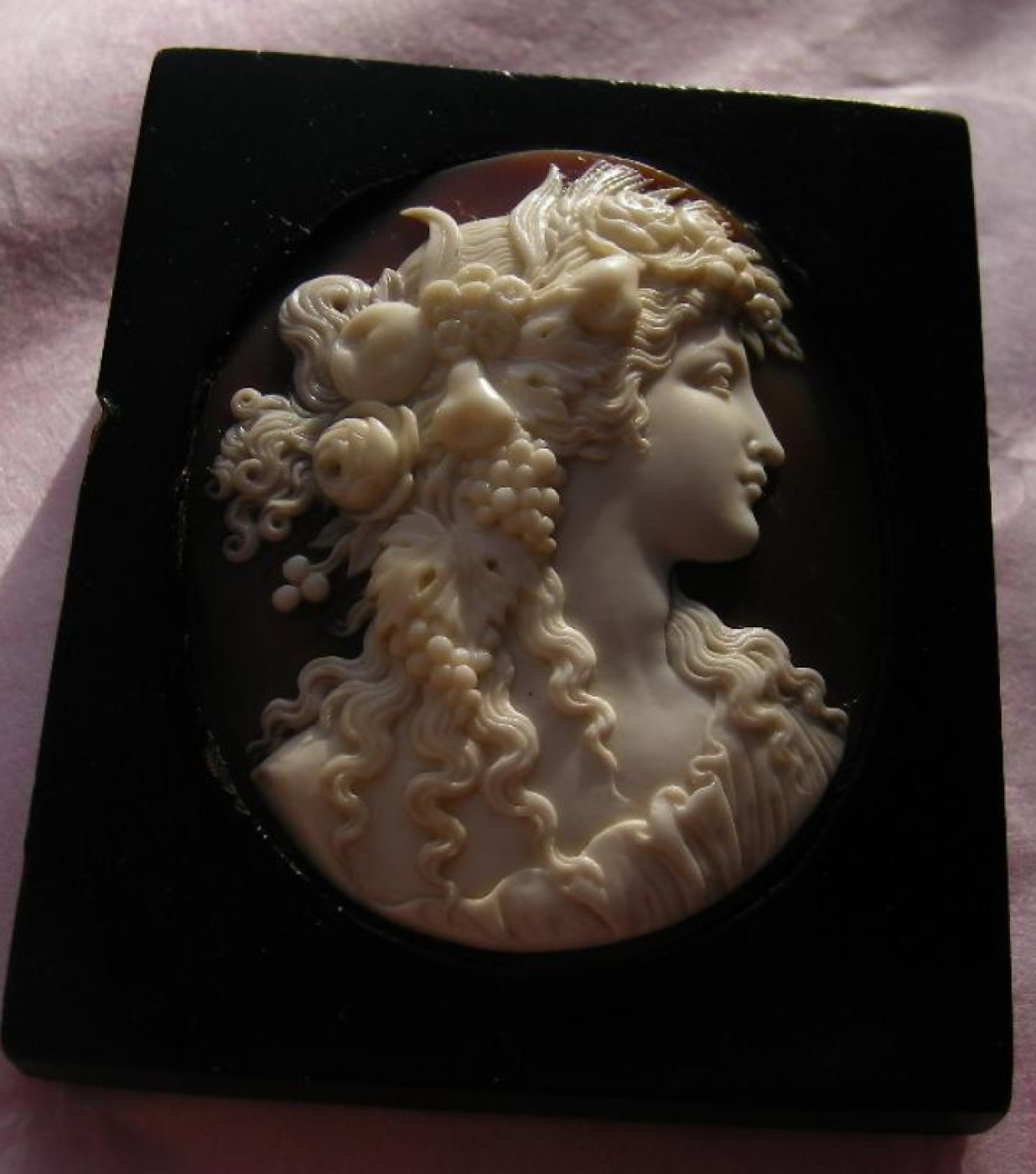 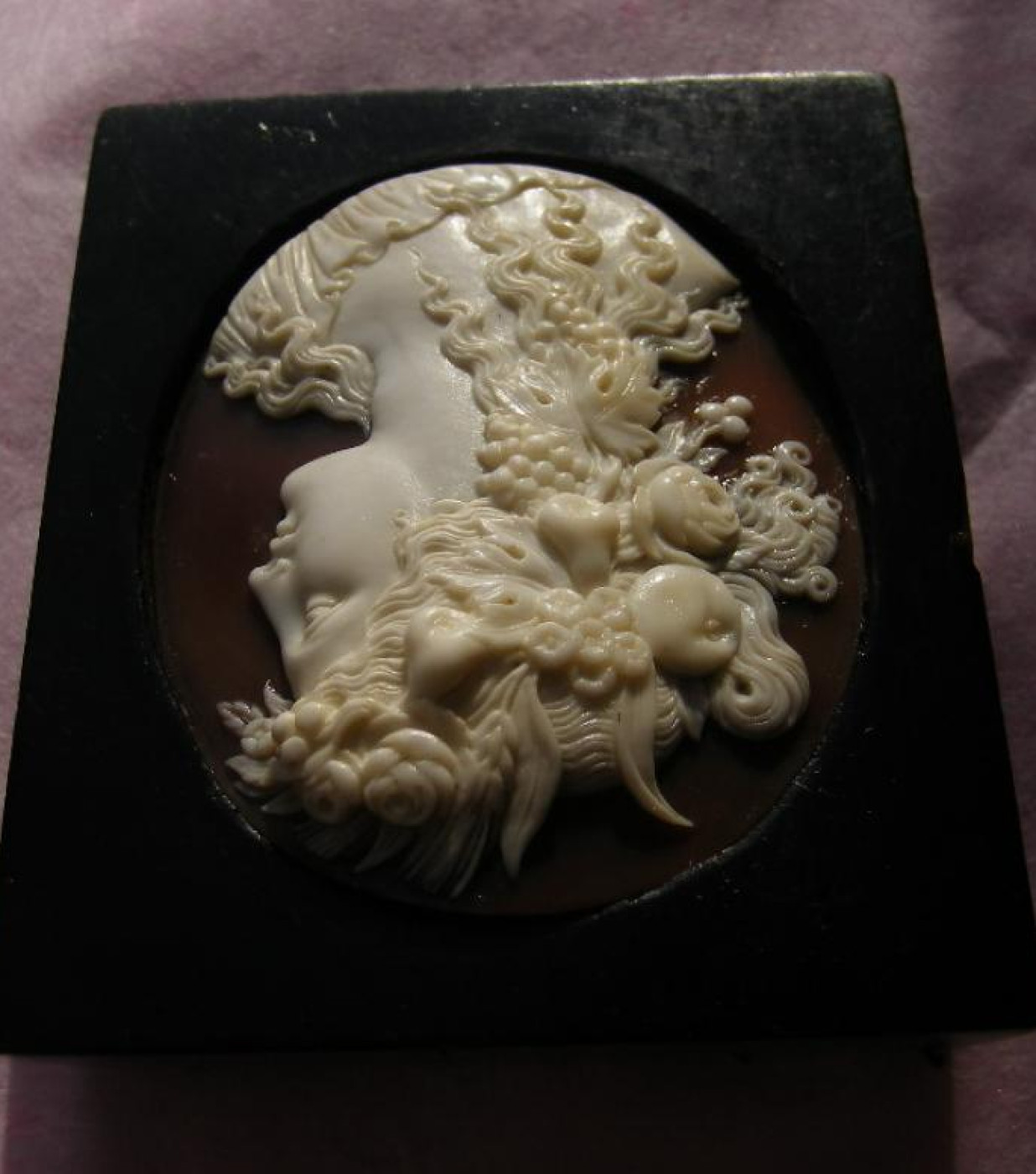 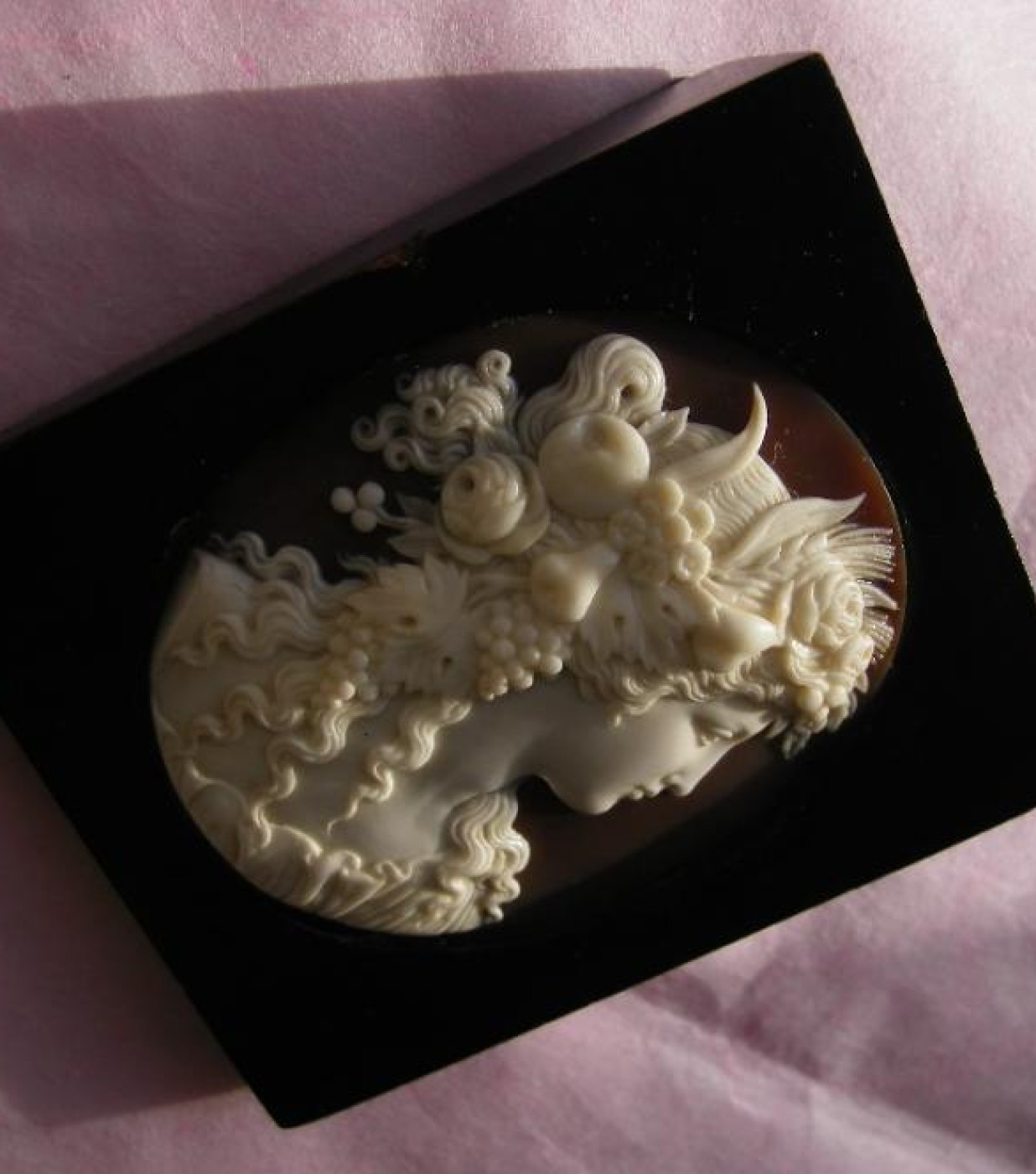 More than Museum Quality cameo depicting Goddess Flora, the carving is superb. Unusually, there are not only flowers in her hair, but even fruits. This could be a combination between two Goddesses: Flora and Pomona.  Look at the beauty of the facial features, she seems alive. The carving in this cameo is an artwork due to the skill of the carver. It is three-dimensional. This one is rarest because of the subject and because of its mounting. This cameo was mounted with that unusual frame only to be displayed or to use it as a paper weight, so the cameo has been never worn and for this reason the shell is in such excellent condition.  This is with no doubt one of most beautiful Flora I have ever handled, the pictures speak by themselves. This is another masterly carved cameo. A very desirable collectors piece, rare and museum quality cameo.
A bit of History:
In Roman mythology, Flora was the goddess of flowers and the season of spring. She was a relatively minor figure in Roman mythology, as there were several more important fertility goddesses, but her association with the spring gave her particular importance at the coming of springtime. Her festival, the Floralia, was held in April or early May and symbolized the renewal of the cycle of life, marked with dancing, drinking, and flowers. Her Greek equivalent was Chloris. Flora was married to Favonius, the wind god.

In Roman mythology, Pomona was the goddess of fruit trees, gardens, and orchards. Her name comes from the Latin word, pomun, which translates to "fruit." She scorned the love of Silvanus and Picus but married Vertumnus after he tricked her, disguised as an old woman. Her high priest was called the flamen Pomonalis. The pruning knife was her attribute. She is a uniquely Roman goddess, never identified with any Greek counterpart, and was particularly associated with the blossoming of trees versus the harvest.