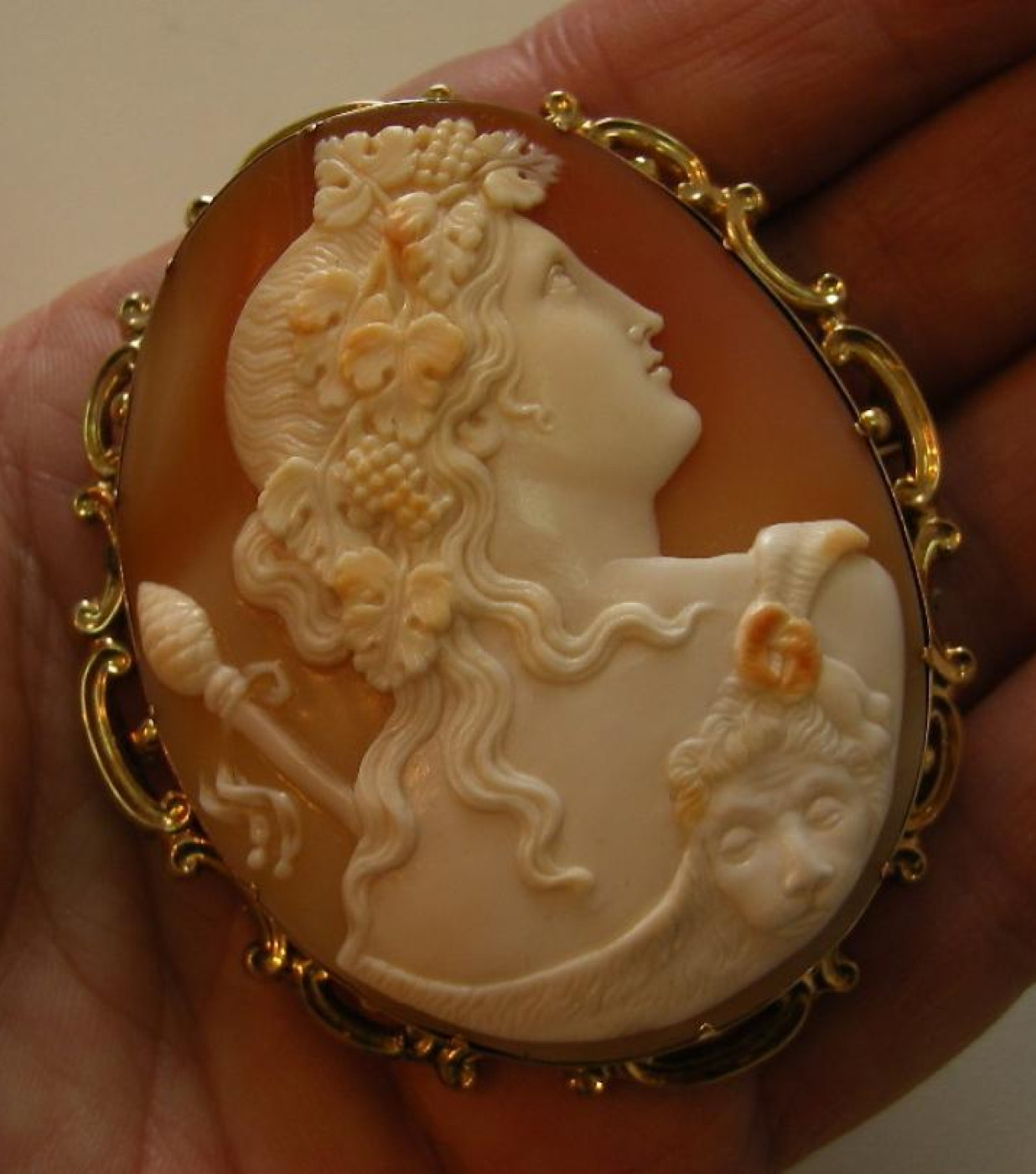 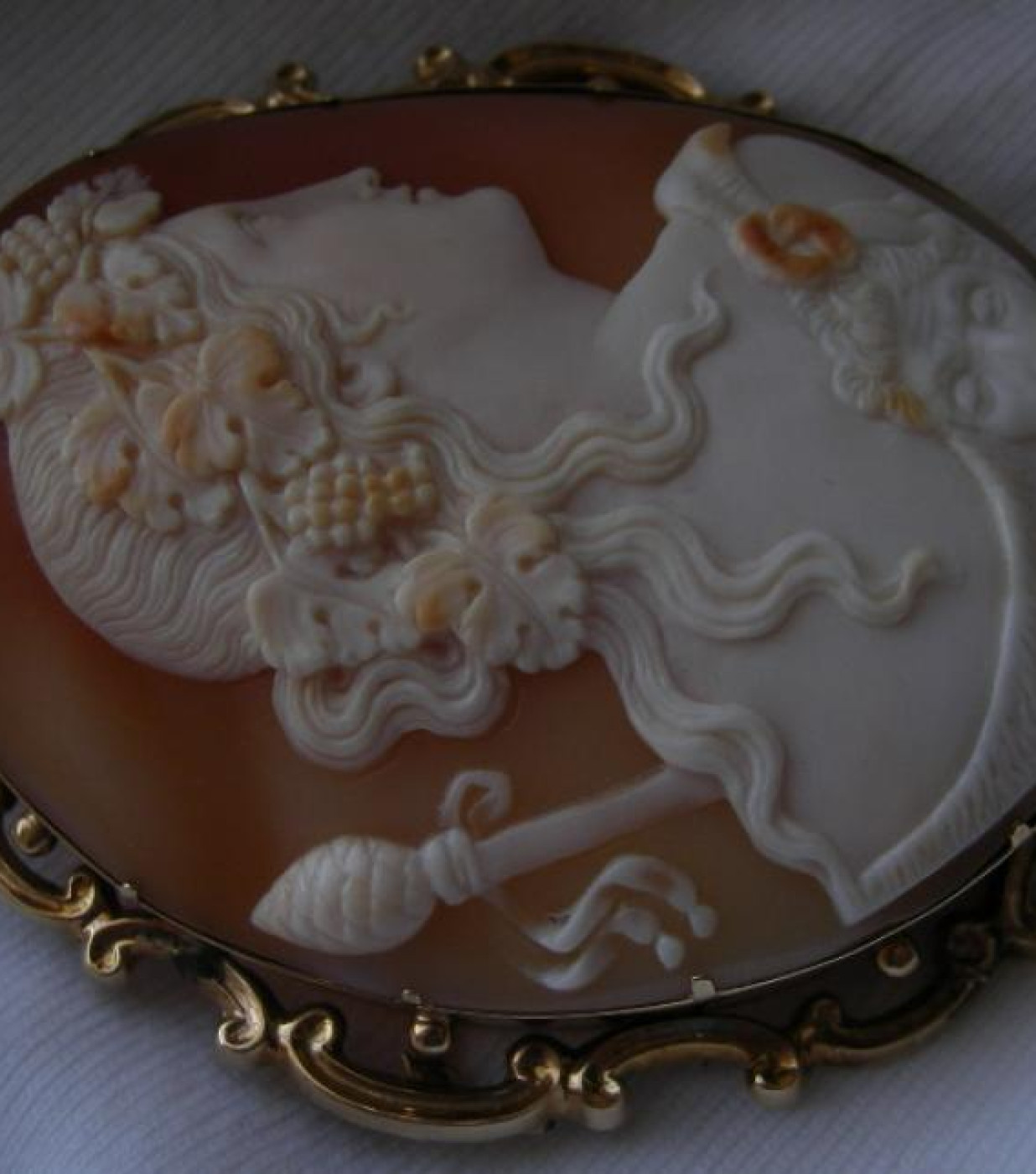 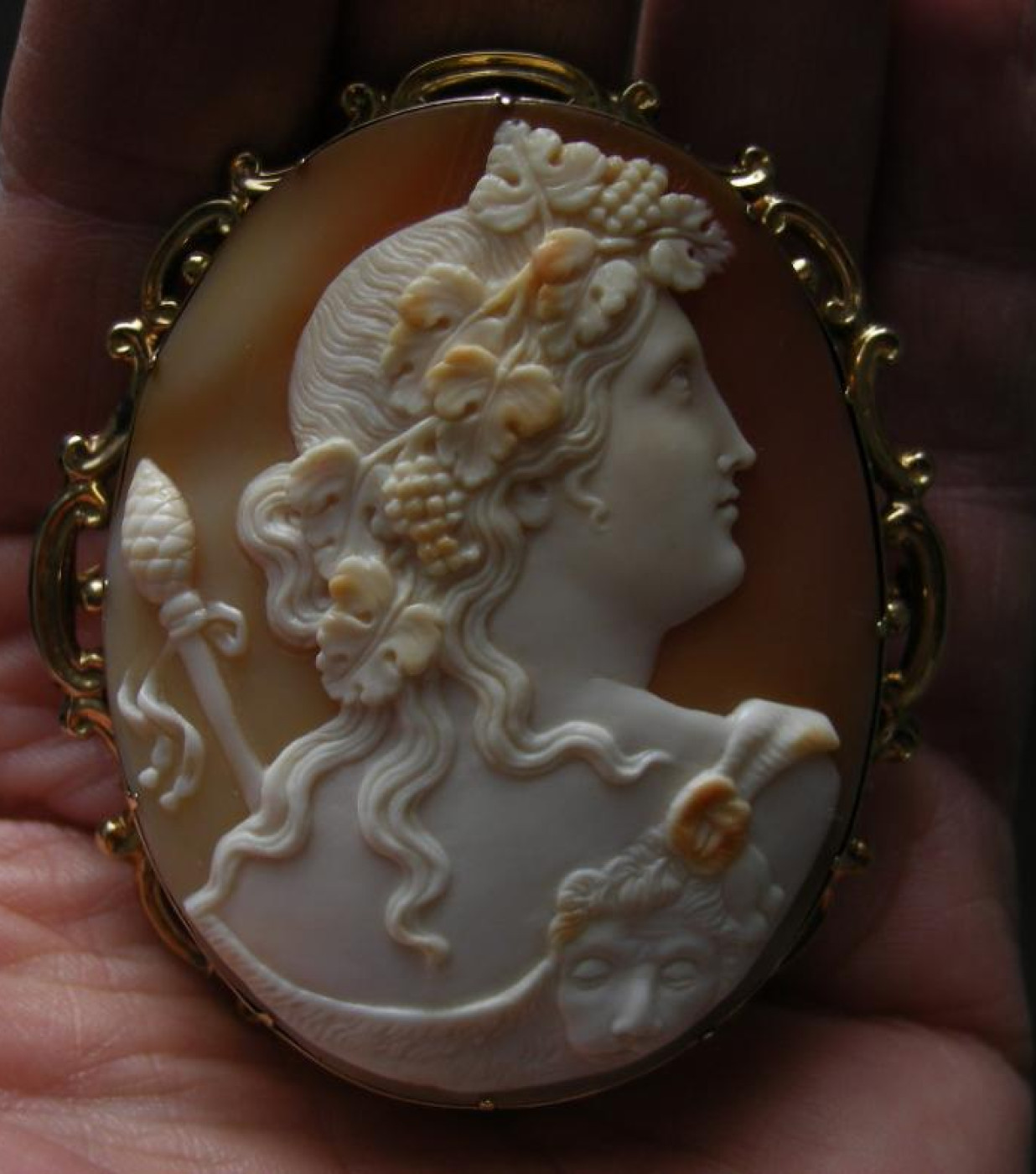 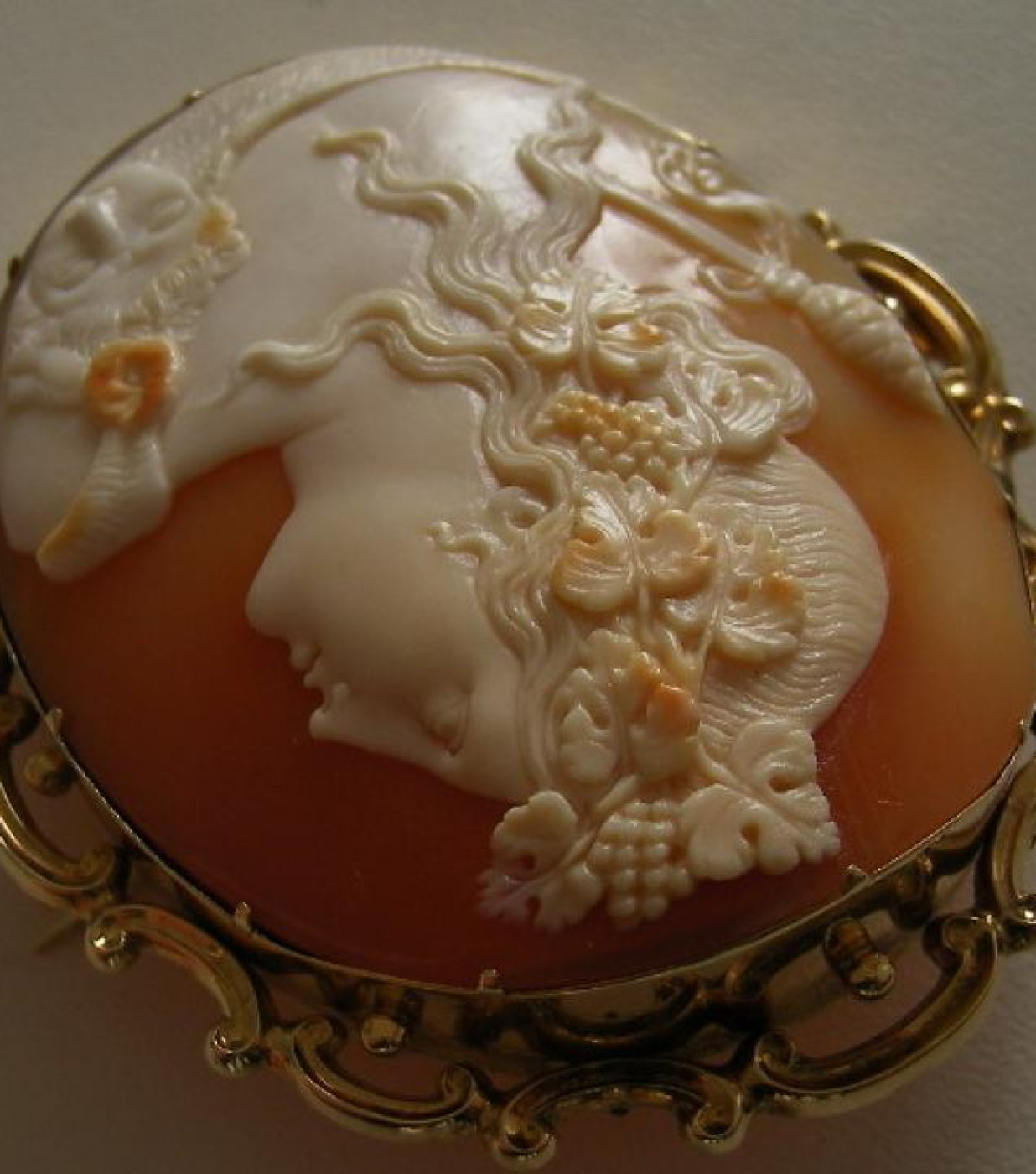 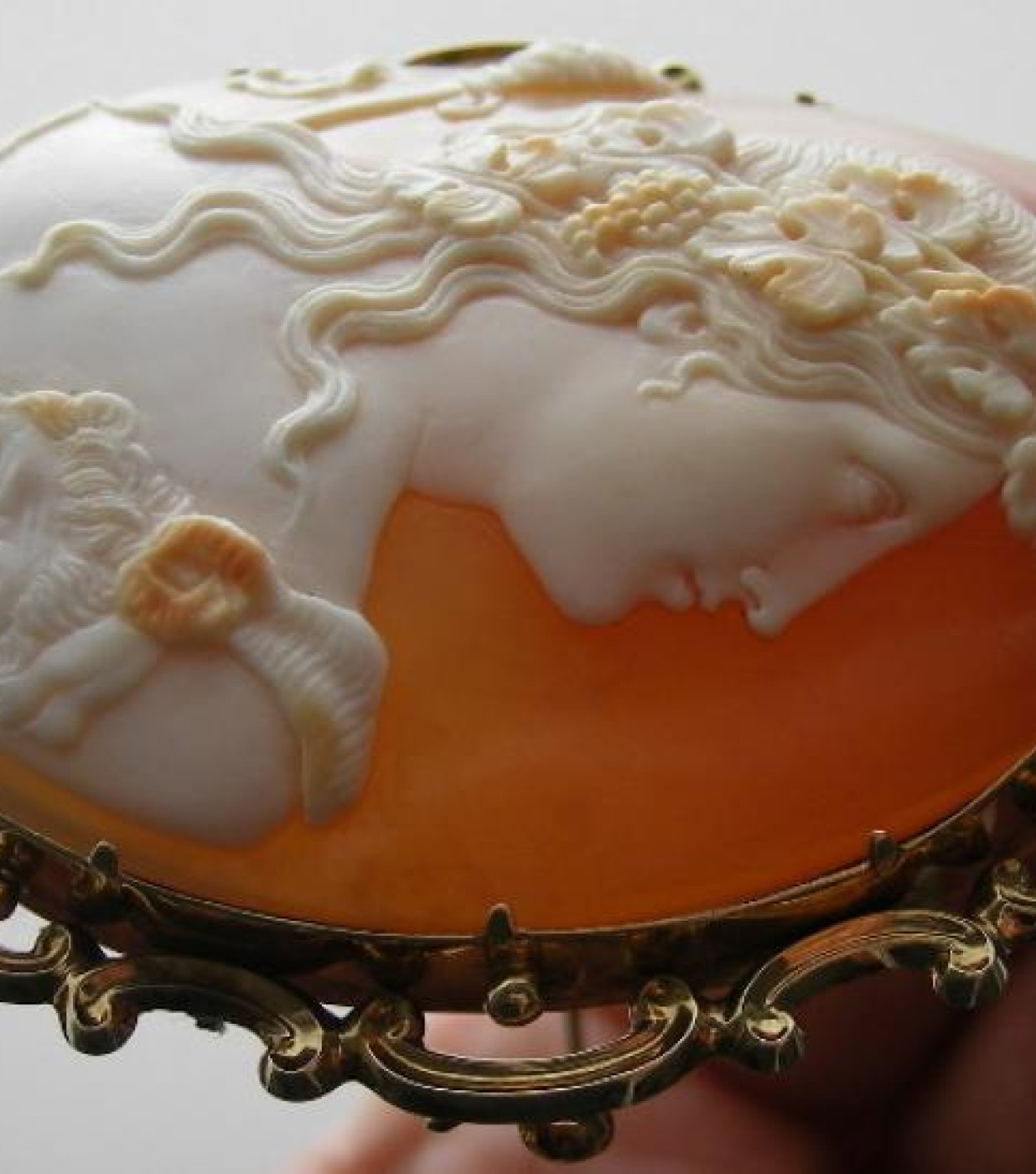 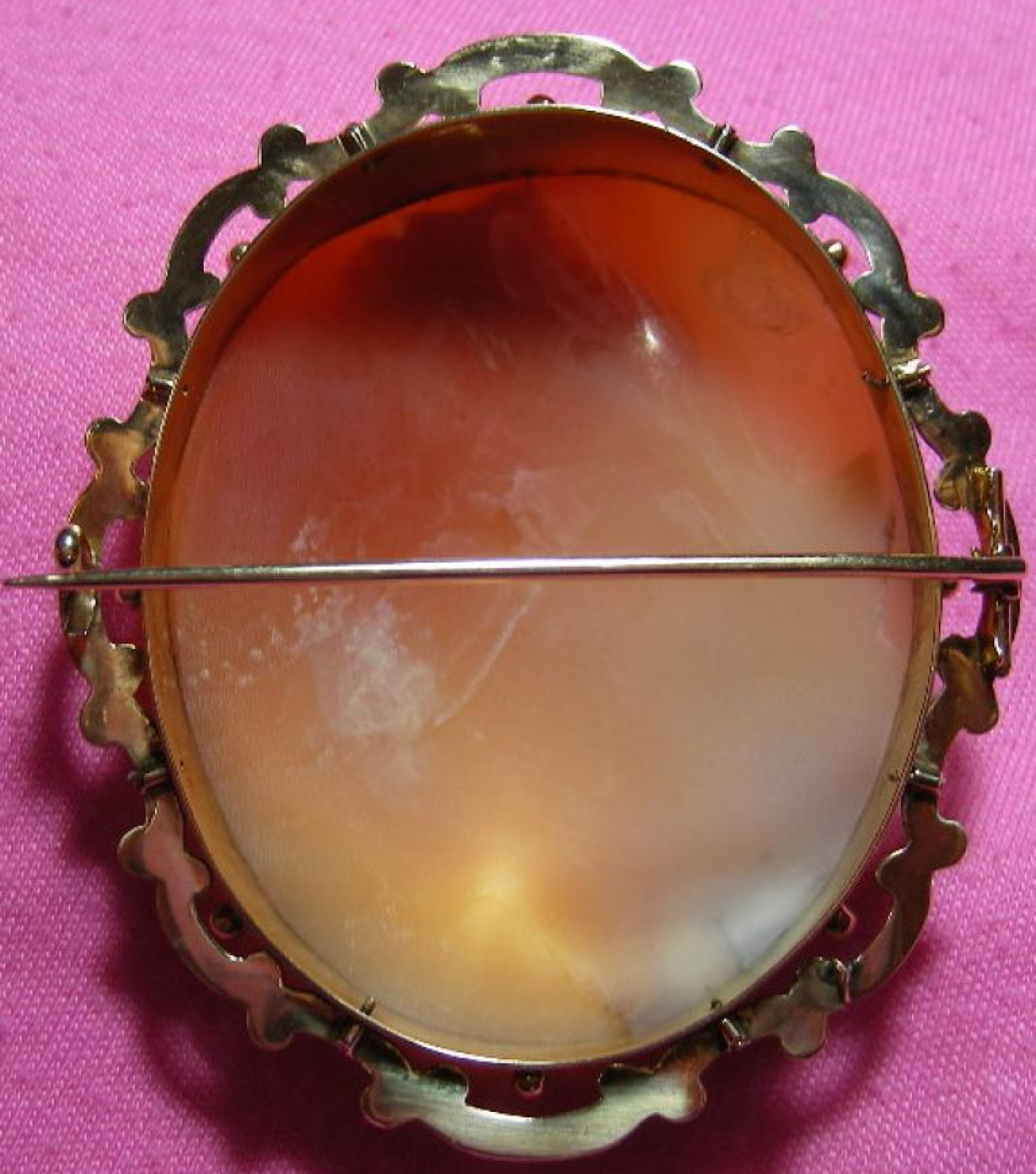 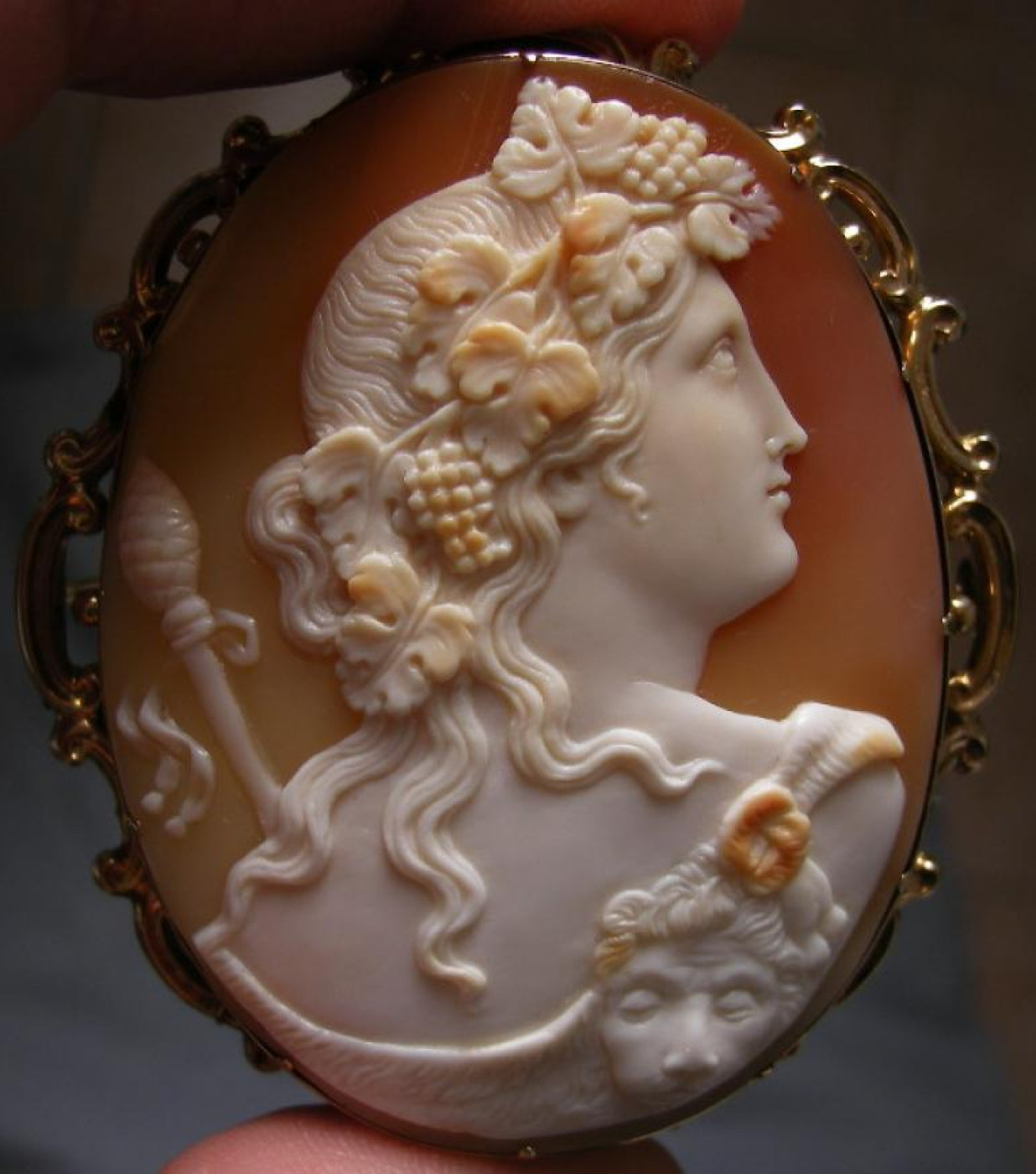 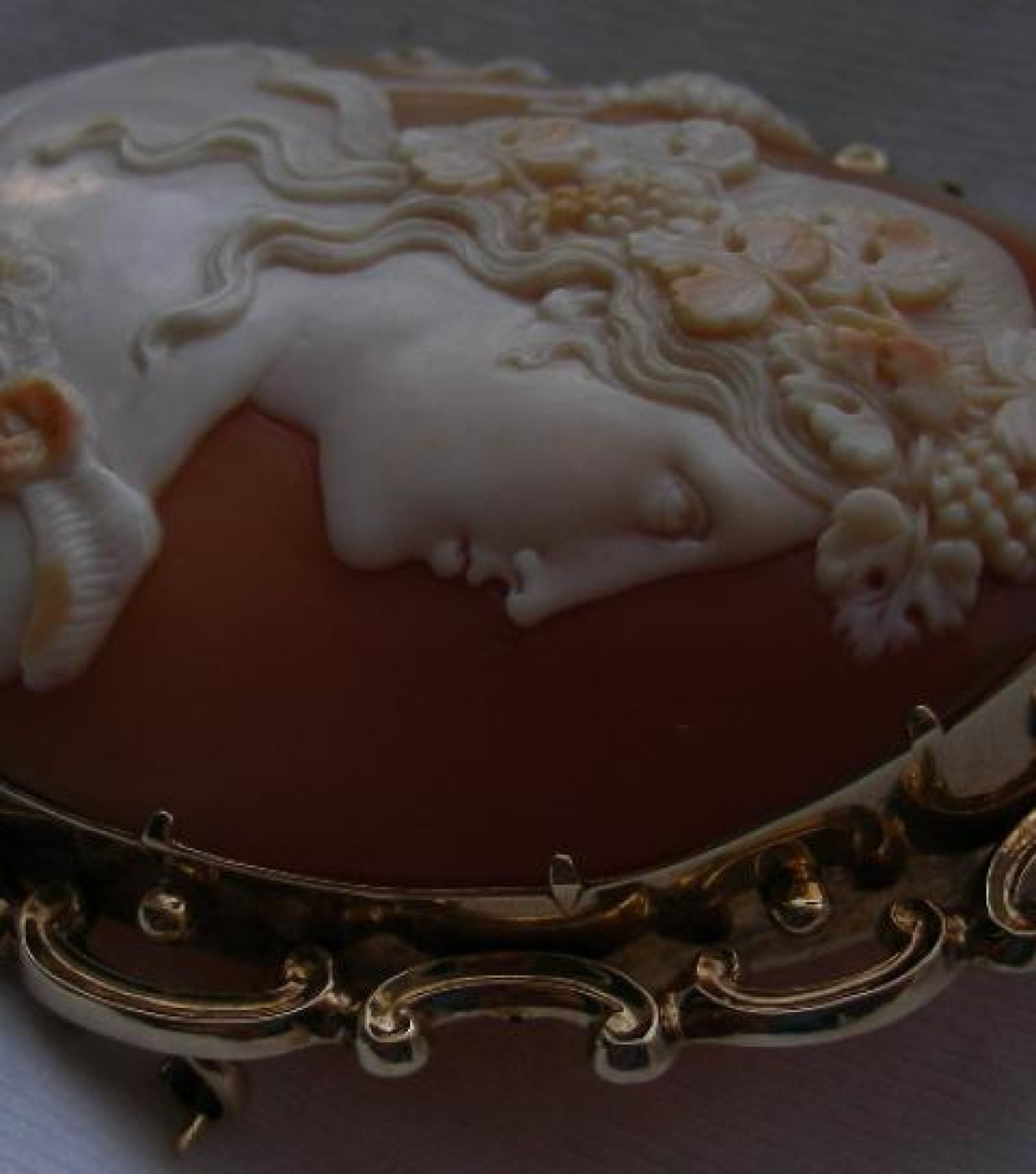 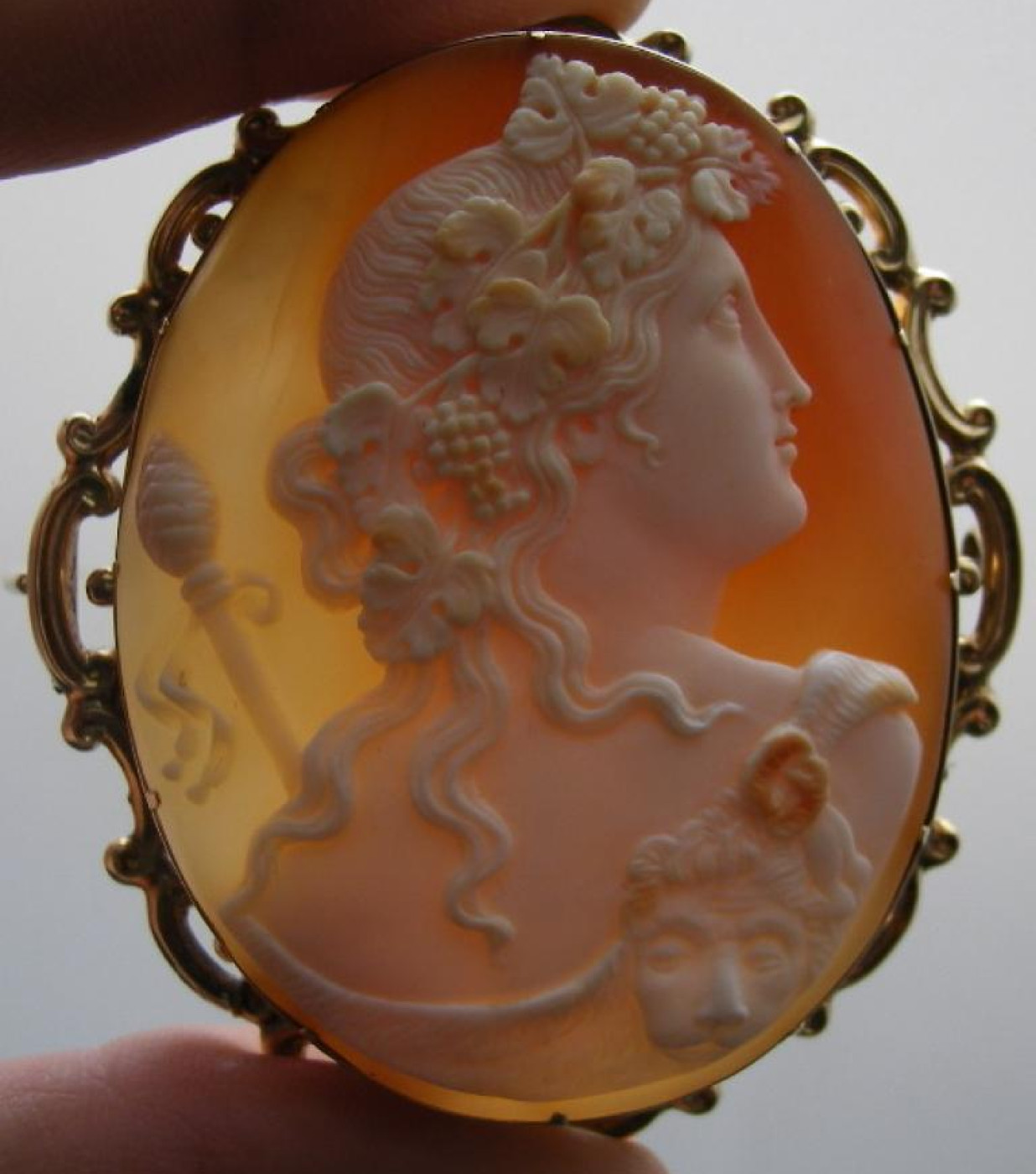 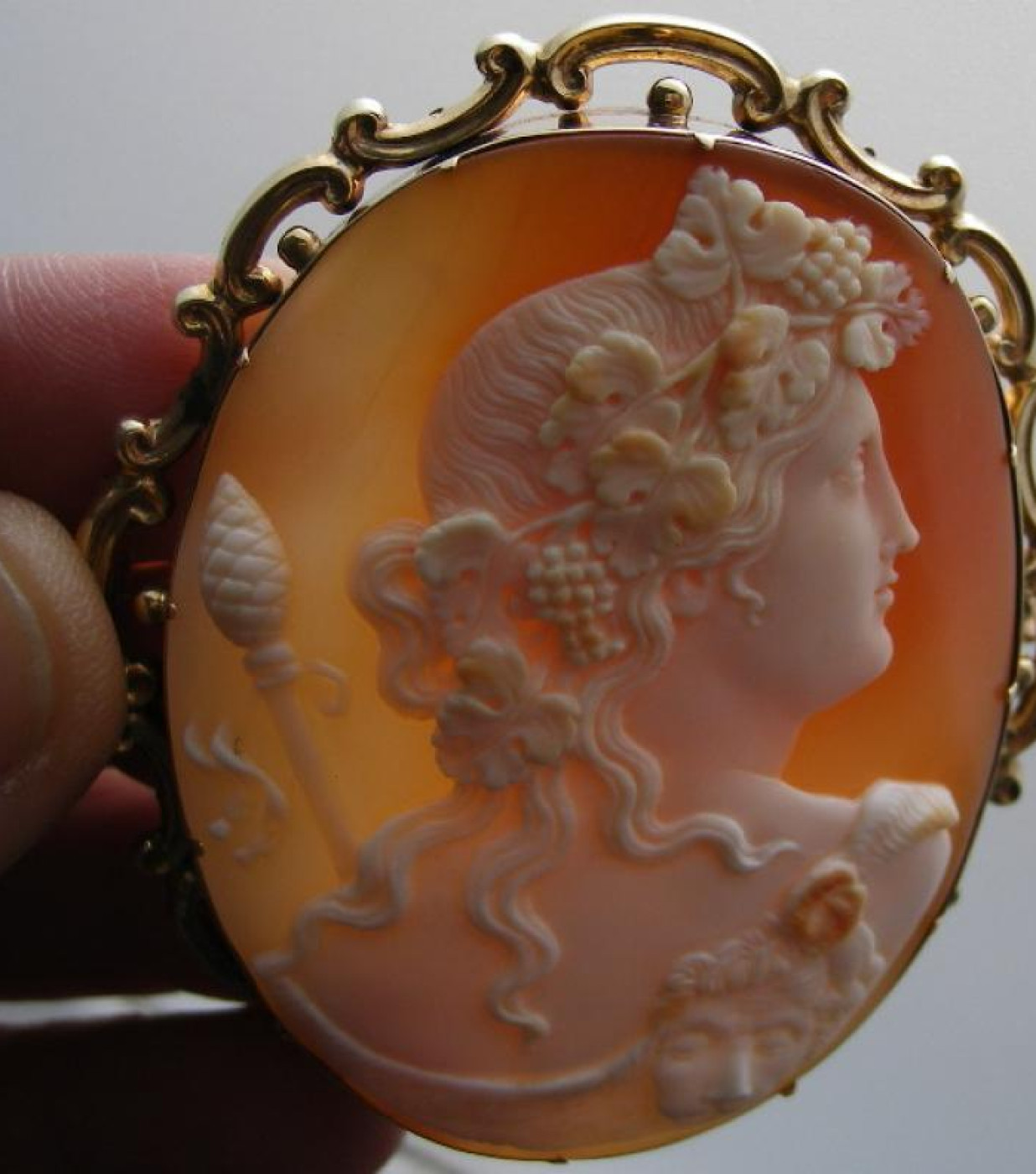 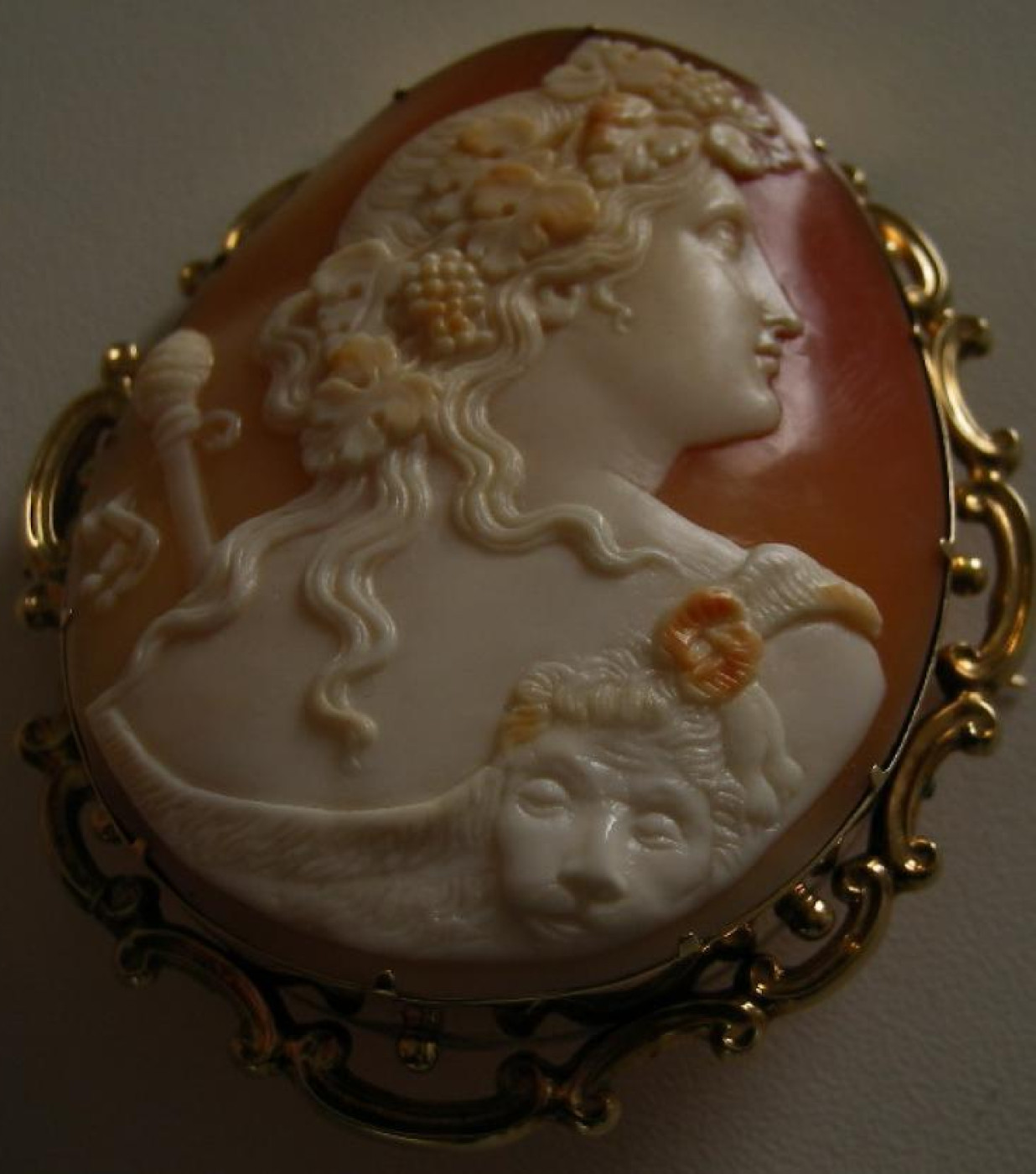 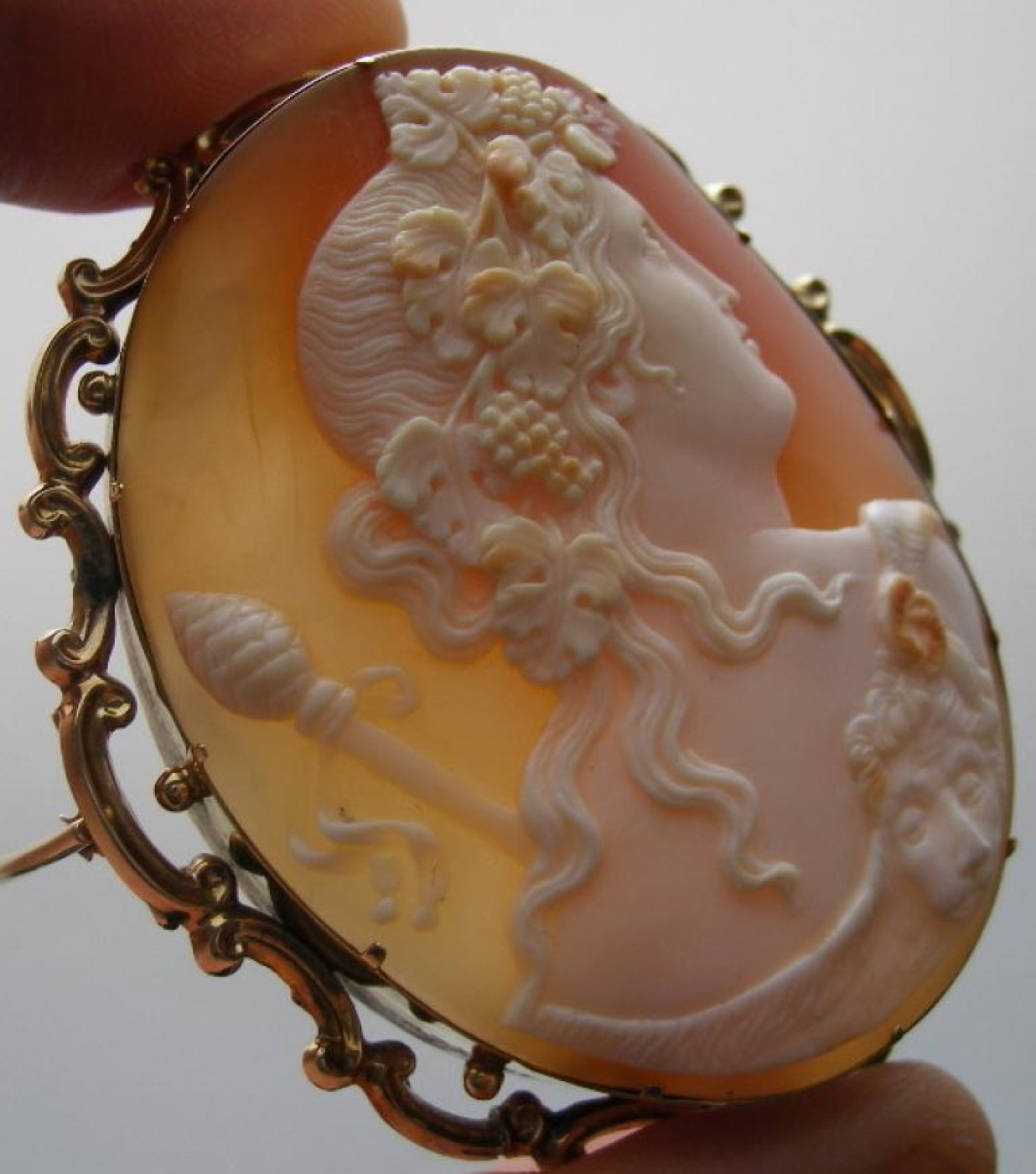 Museum Quality Cameo depicting Dionysus (Bacchus), the God of Wine. His head crowned with a wreath of fruiting vines, wearing a pelt and carrying a thyrsus. Inspired by libations he looks upward in ecstasy. This is an incredible work of art, very detailed cameo, carved by an artist. Frame is  15 kt gold tested, beautifully chiselled . Rarest cameo very desirable collectors' piece.

Bacchus (Dionysus for the Greeks) was the God of Wine, of the joyful voluptuousness of drinking and of the sensuality to which the Italics attributed at the end the uses and the rites of the corresponding Greek God Dionysus. He's the God of the vices, his cult (Bacchanalian) arrived in the Italian Peninsula in the 2nd century B.C. The symbol of this divinity, other than the grapevine and the climbing ivy, was the thyrsus, a stick surmounted by an ivy tangle. On a side his aspect was always the one of a very handsome youth with a curly head and crowned by vine-leaf and grapevines. He was a jolly, smiling God and symbol of the rejoicing and of the richness of the nature, on the other side tied up to dark rites and sometime wild. Son of Zeus and Semele, a mortal woman, that following the perfidious counsel of the jealous Hera, was burnt down for having looked at the face of her lover, Zeus, in all of his splendour, thing not permitted to the mortals. Zeus, to save Dionysus, took to the end the pregnancy of his sons sewing him in a thigh of his then he brought him to Nysa where the Nymphs fed him with honey (the wet nurses Nymphs became later the stars of the Ladi constellation). During the Dionysian festivals usually was sacrificed a goat with a chorals and speeches exchanged between the priests. To this aspect of that ritual the Greek Tragedy can be originated as the Greek thinkers believe, Tragedy destined, in the Classic Greece, to become one of the highest and most complete form of poetry.