Amazing Cameo of a Raphael's Angel 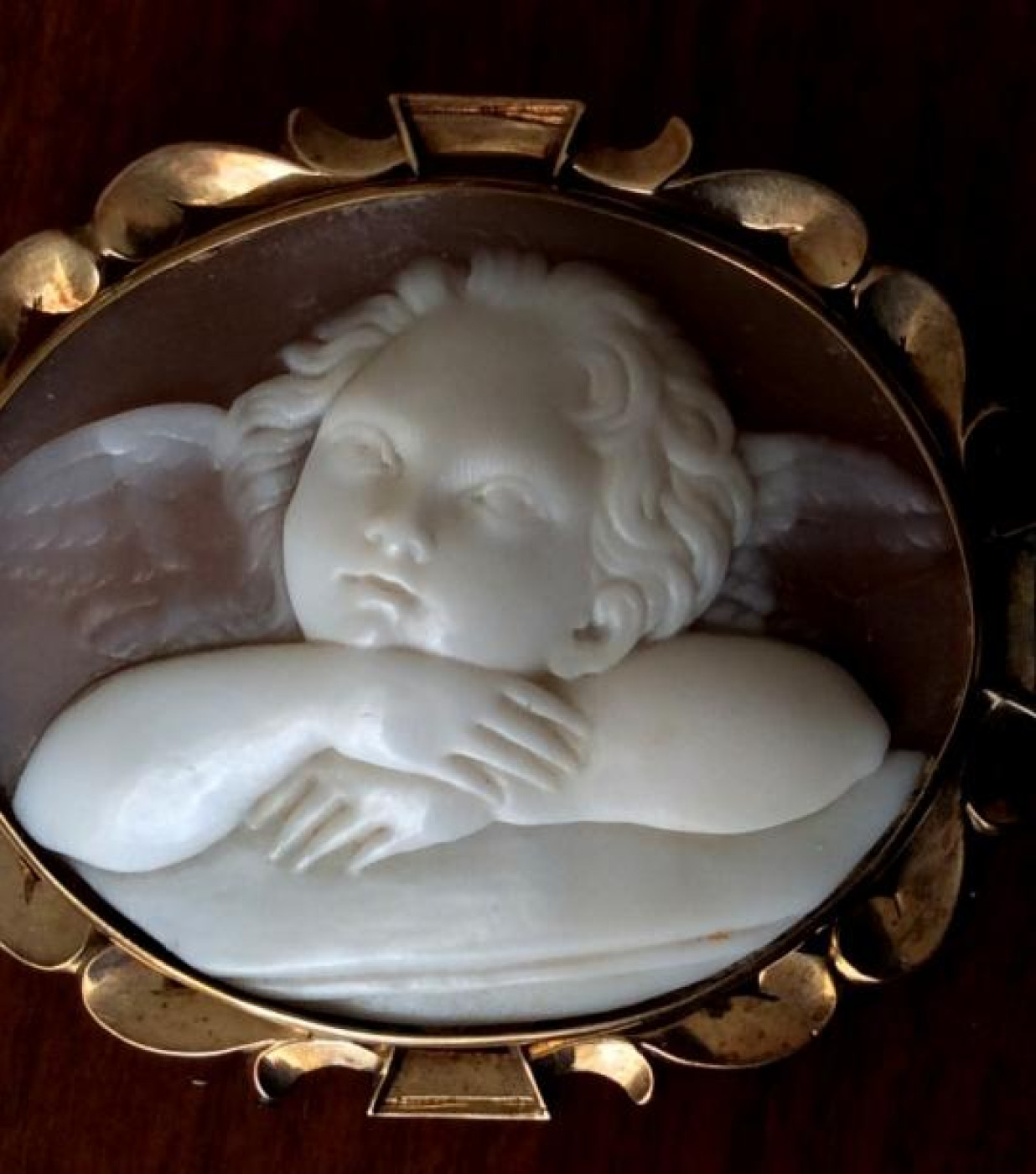 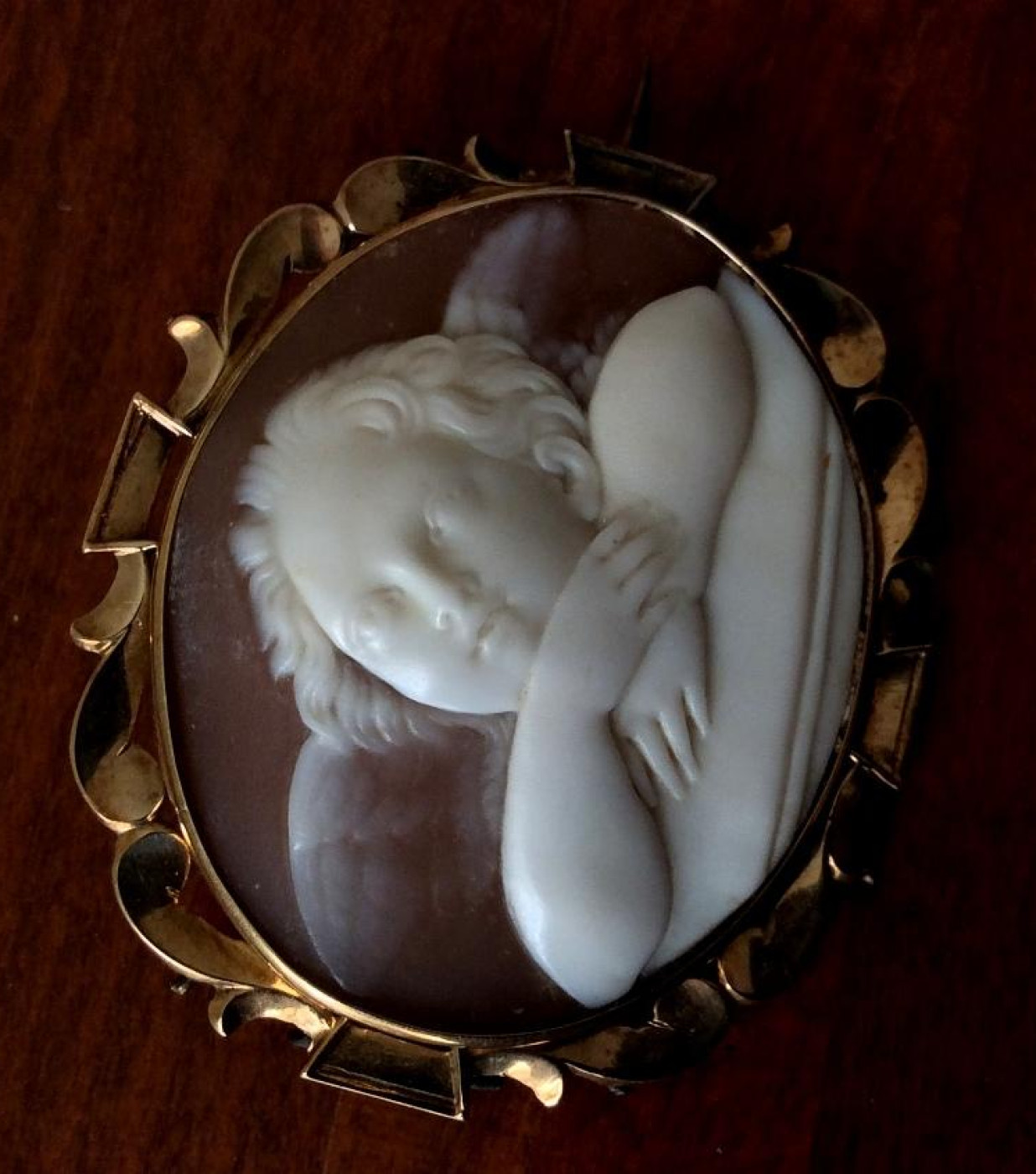 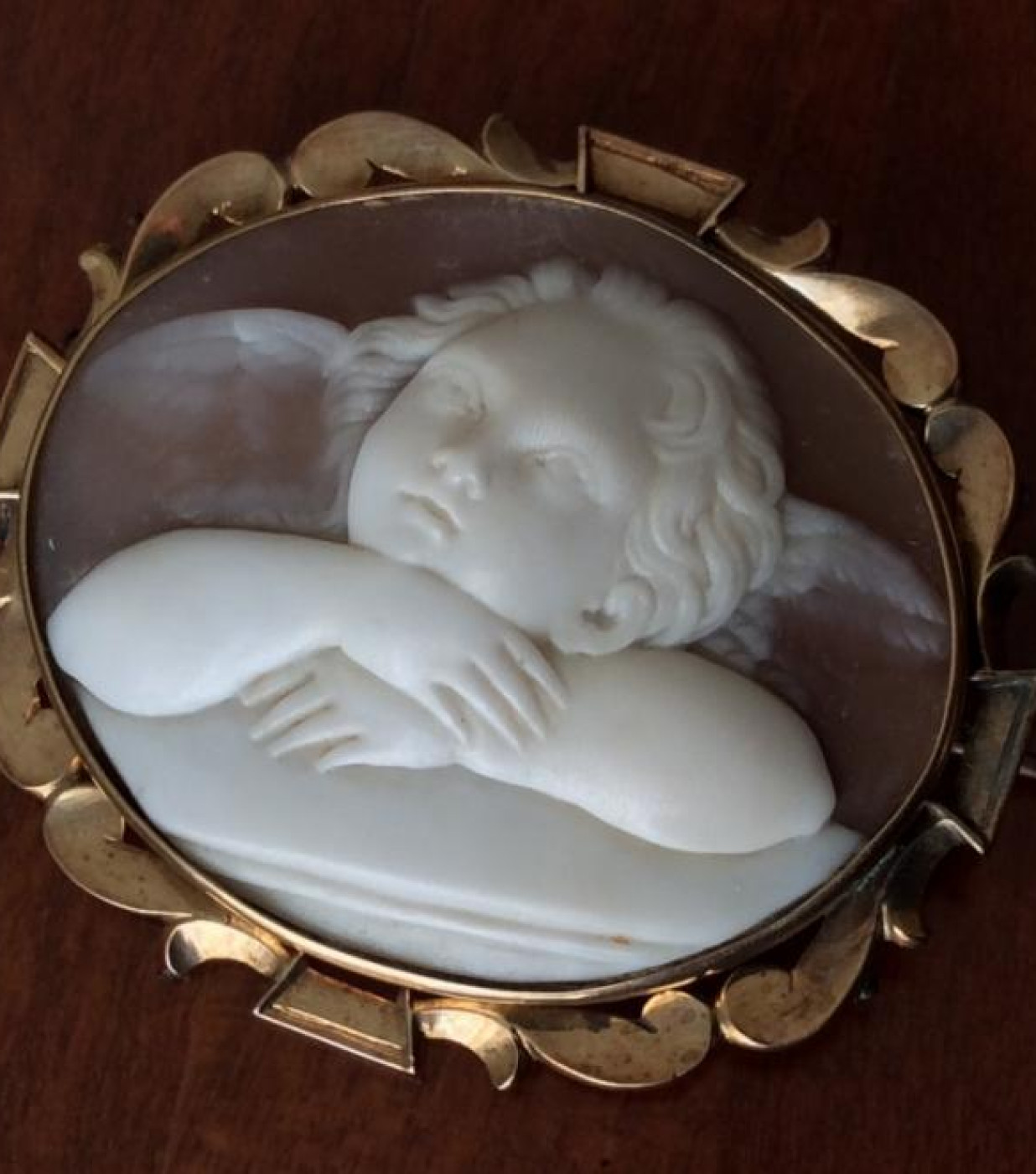 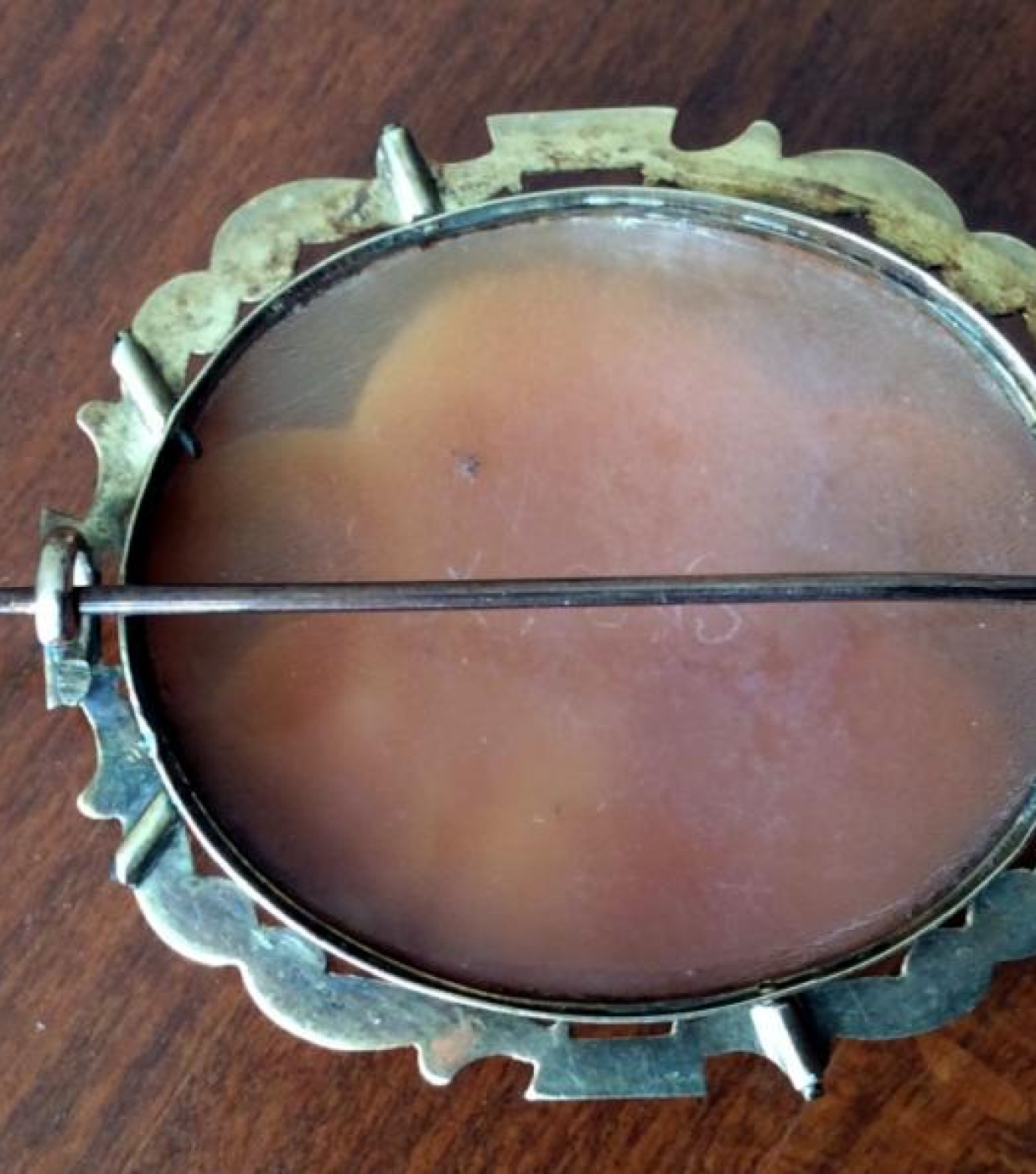 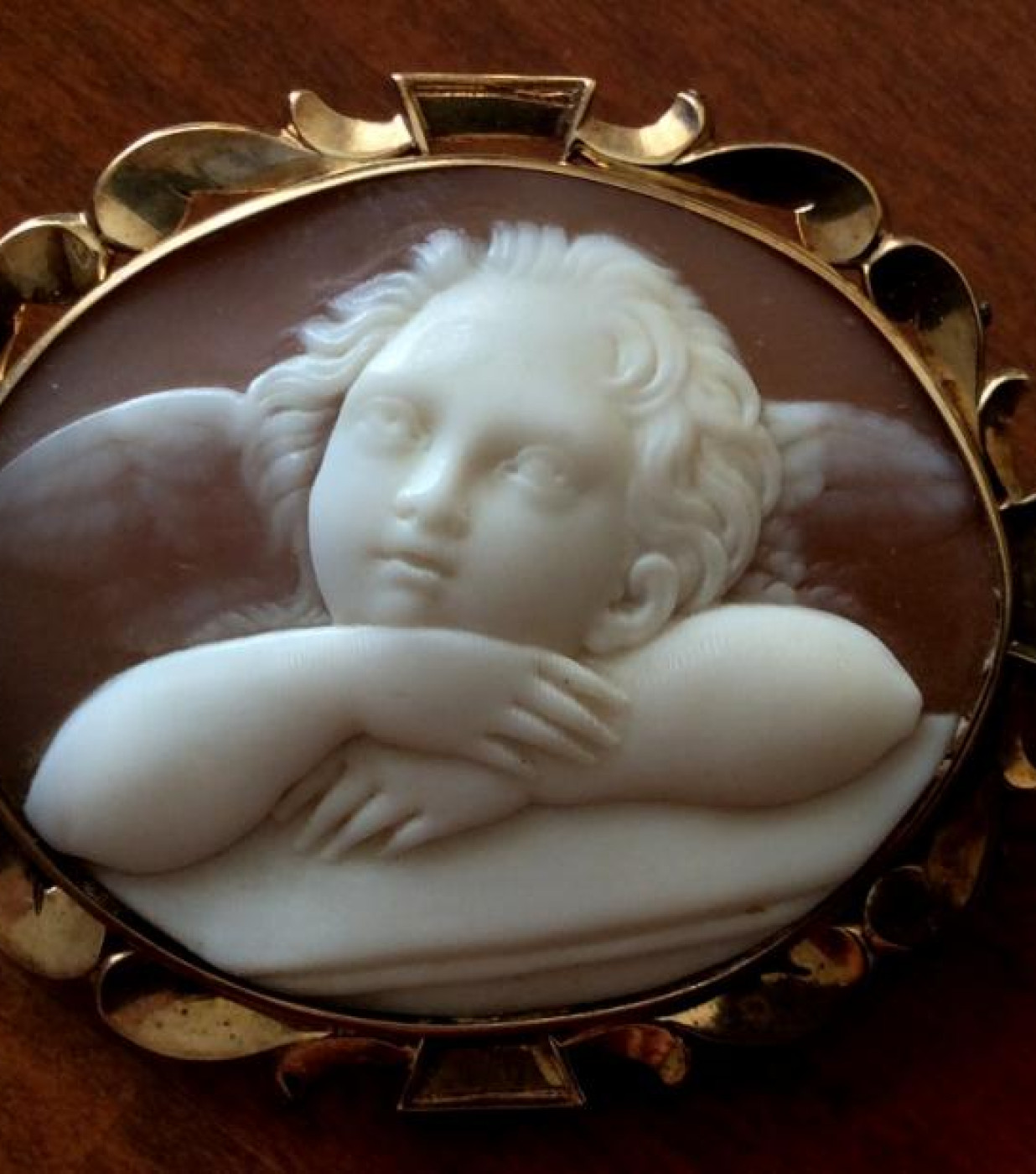 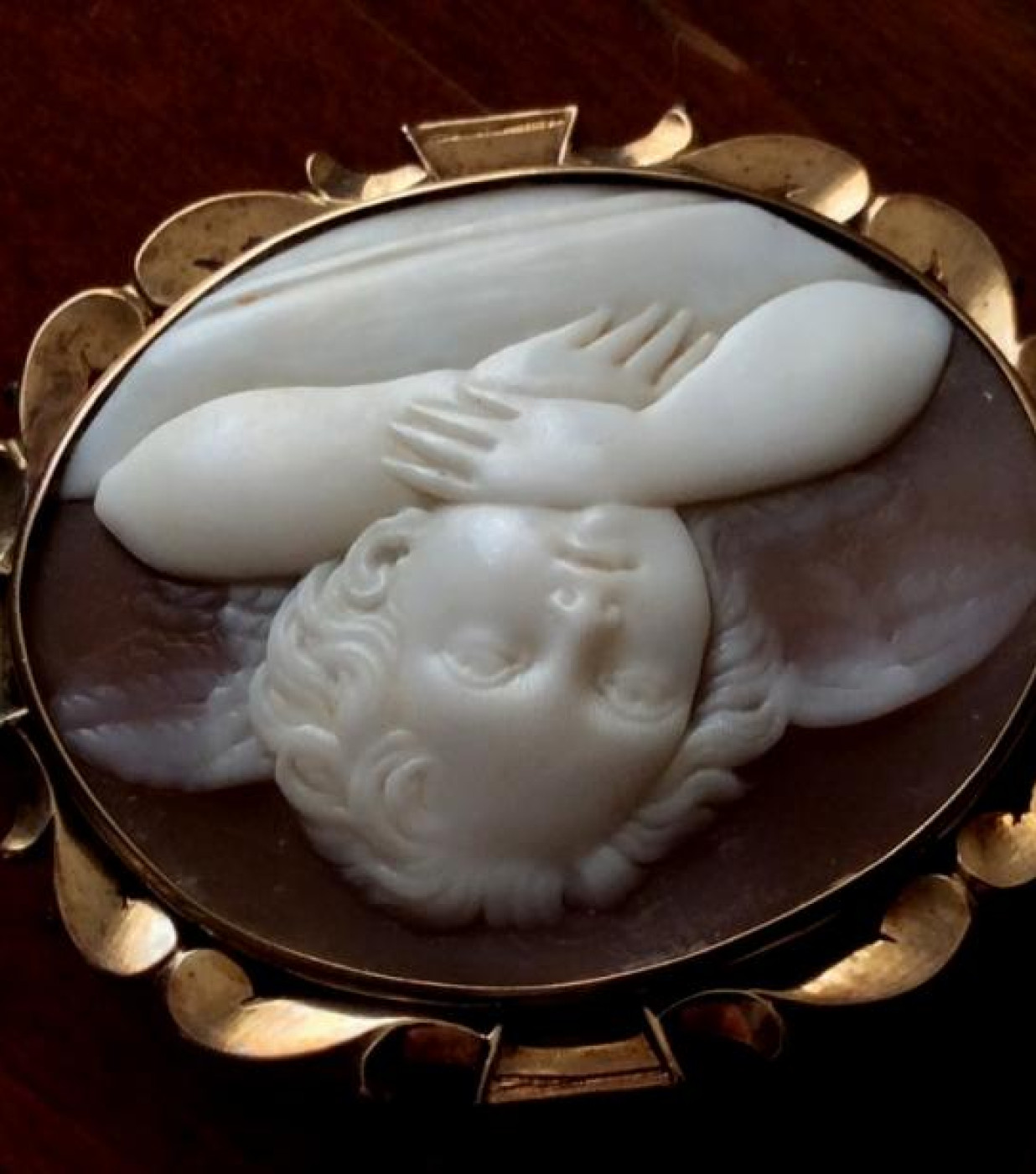 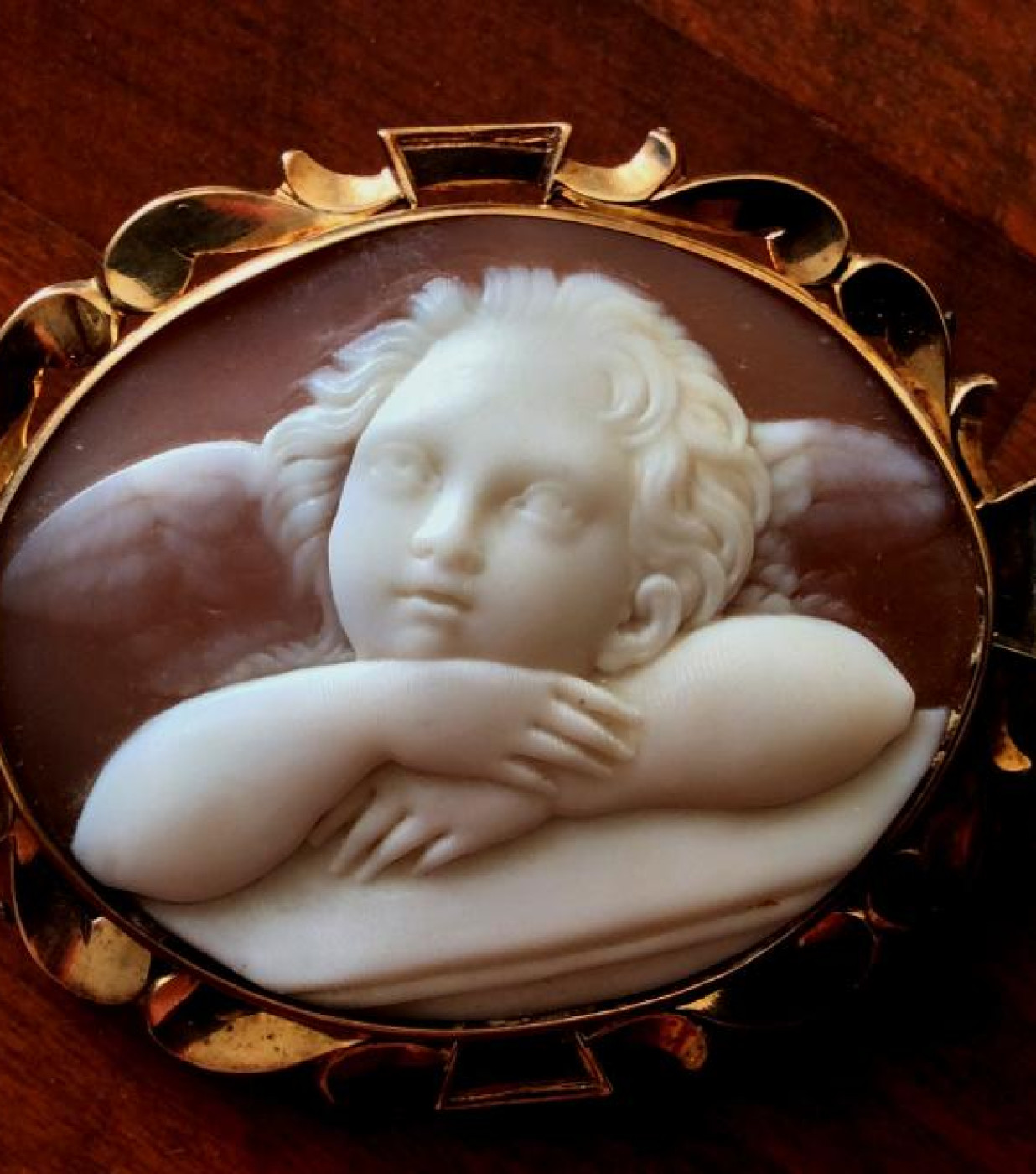 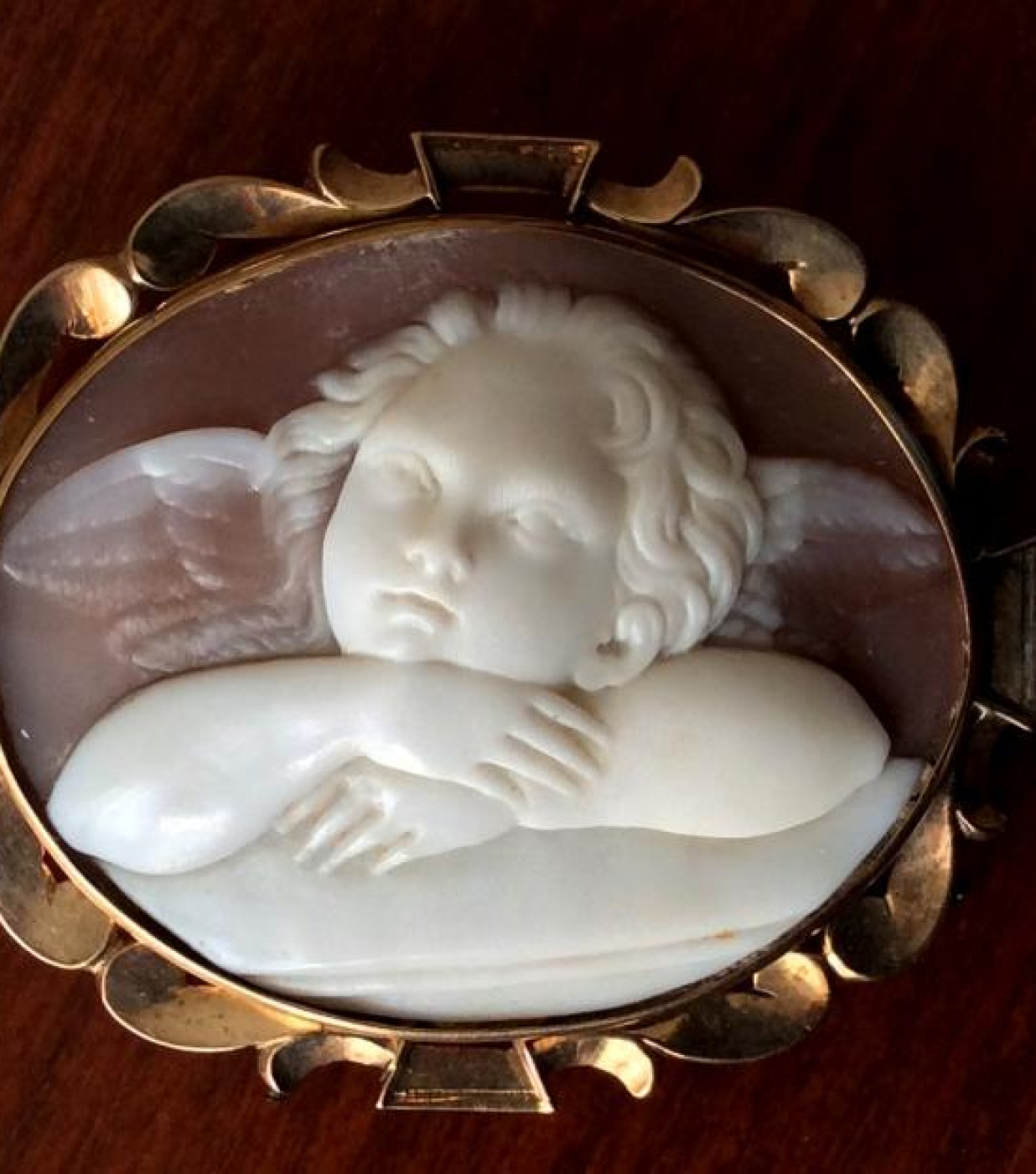 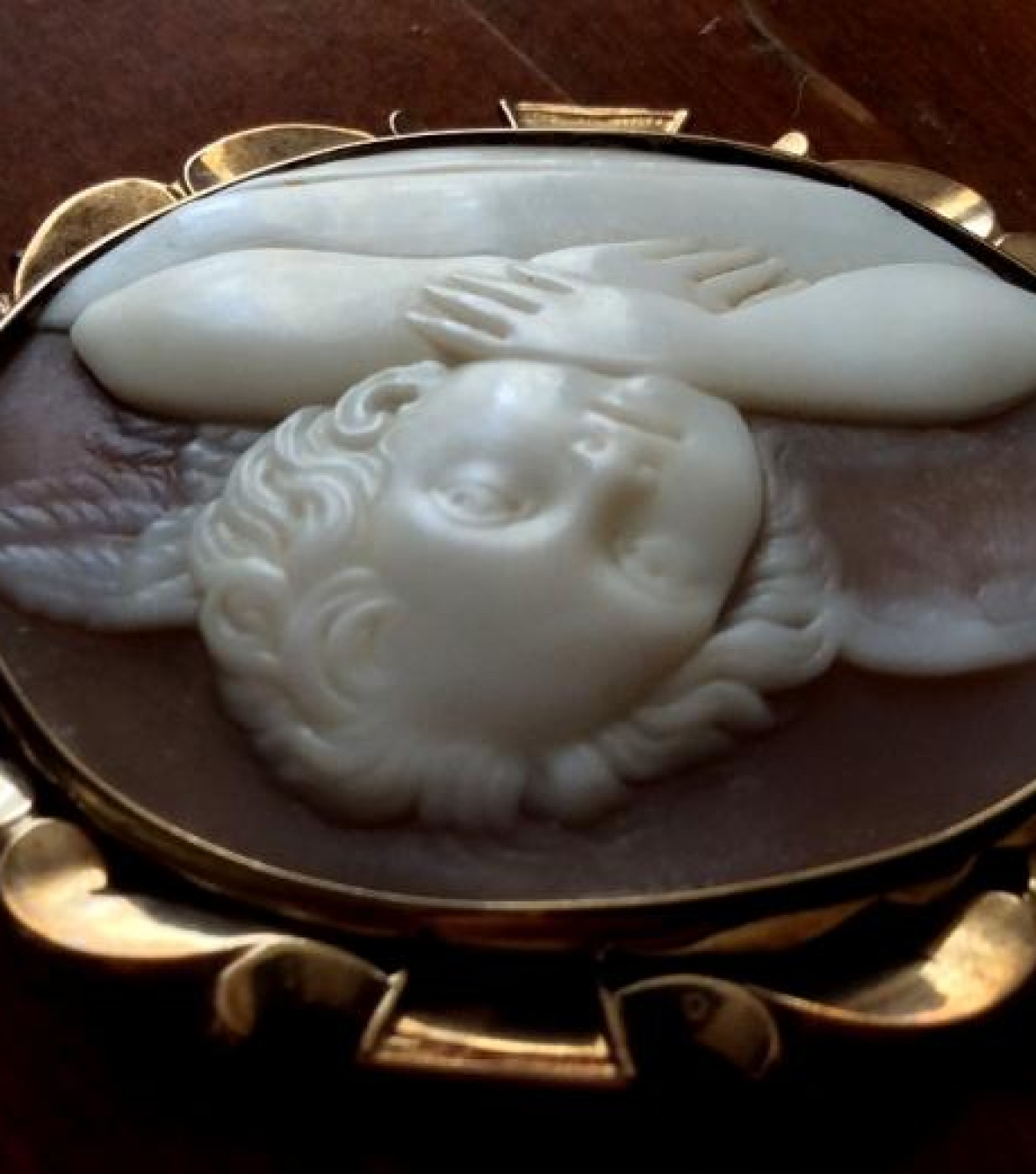 Museum Quality cameo depicting one the Raphael’s Angels after the Sistine Madonna, (see painting's picture and cherub details above) also called The Madonna di San Sisto, is an oil painting by the Italian artist Raphael. Finished shortly before his death, ca. 1513–1514, as a commissioned altarpiece, it was the last of the painter's Madonnas and the last painting he completed with his own hands. Relocated to Dresden from 1754, the well-known painting has been particularly influential in Germany. After World War II, it was relocated to Moscow for a decade before it was returned to Germany. There, it resides as one of the central pieces in the Gemäldegalerie Alte Meister. In the painting, the Madonna, holding the Christ Child and flanked by Saint Sixtus and Saint Barbara, stands on clouds before dozens of obscured cherubs, while two distinctive winged cherubs rest on their elbows beneath her. American travel guide Rick Steves suggests that the expression on Mary's face stands in marked contrast to the usual in that this Mary is worried, reflecting her original placement beside a painting of the Crucifixion. This cameo is a real rare one, I have seen before the Raphael cherubs carved on shell but never so finely carved. If you look at the picture of the painting and at the details of this cherub, you'll see that the cameo depicts almost exactly the subject of the painting. The carving is very delicate but this is why this cameo is so lovely, a stronger carving was not appropriate for a figure like a cherub. His face is sweet and full of grace, his little nose is graciously turned up. His wings are ethereal and finely made. A wonderful cameo depicting a rare subject.


A bit of history:


Commissioned by the Benedictine monks of the Monastery of San Sisto in Piacenza, Raphael painted the piece as their altarpiece. Finished shortly before his death, ca. 1513–1514, it was the last of the painter's Madonnas and the last painting he completed with his own hands. It was their requirement that the image contain both Saint Sixtus and Saint Barbara. Legend has it that when Antonio da Correggio first laid eyes on the piece, he was inspired to cry, "And I also, I am a painter!"
In 1754, Augustus III of Poland purchased the painting for 110,000 – 120,000 francs, whereupon it was relocated to Dresden and achieved new prominence. In 2001's The Invisible Masterpiece,  describes the influence the painting has had in Germany
Like no other work of art, Raphael's Sistine Madonna in Dresden has fired the Germans' imagination, uniting or dividing them in the debate about art and religion.... Over and again, this painting has been hailed as 'supreme among the world's paintings' and accorded the epithet 'divine'....
If the stories are correct, the painting achieved its prominence immediately, as it's said that Augustus moved his throne in order to better display it. The Sistine Madonna was notably celebrated by Johann Joachim Winckelmann in his popular and influential Geschichte der Kunst des Alterthums (1764), positioning the painting firmly in the public view and in the center of a debate about the relative prominence of its Classical and Christian elements. Alternately portraying Raphael as a "devout Christian" and a "'divine' Pagan" (with his distinctly un-Protestant Mary who could have as easily been Juno), the Germans implicitly tied the image into a legend of their own, "Raphael's Dream." Arising in the last decades of the 18th century, the legend—which made its way into a number of stories and even a play—presents Raphael as receiving a heavenly vision that enabled him to present his divine Madonna. The legend itself inspired considerable passion in the painting's audiences, some of whom (including one of Freud's patients) were transported to a state of religious ecstasy by the sight of it, and created of the painting an unlikely icon of romanticism. The picture influenced Goethe, Wagner and Nietzsche. In 1855, the "Neues Königliches Museum" (New Royal Museum) opened in a building designed by Gottfried Semper, and theSistine Madonna was given a room of its own.
Sistine Madonna was rescued from destruction during the bombing of Dresden in World War II, but the conditions in which it was saved and the subsequent history of the piece are themselves the subject of controversy. The painting was then transported  to Moscow.
In 1946, the painting went temporarily on restricted exhibition in the Pushkin Museum, along with some of the other treasures the Soviets had retrieved.[ But in 1955, after the death of Joseph Stalin, the Soviets decided to return the art to Germany, "for the purpose of strengthening and furthering the progress of friendship between the Soviet and German peoples."
After its return to Germany, the painting was restored to display in the Gemäldegalerie Alte Meister, where guidebooks single it out in the collection, variously describing it as the "most famous",the "top",the "showpiece", and "the collection's highlight".
A prominent element within the painting, the winged angels beneath Mary are famous in their own right. As early as 1913 Gustav Kobbé declared that "no cherub or group of cherubs is so famous as the two that lean on the altar top indicated at the very bottom of the picture." Heavily marketed, they have been featured in stamps, postcards, t-shirts, wrapping paper, and even condom wrappers. These cherubs have inspired legends of their own. According to a 1912 article in Fra Magazine, when Raphael was painting the Madonna the children of his model would come in to watch. Struck by their posture as they did, the story goes, he added them to the painting exactly as he saw them. Another story, recounted in 1912's St. Nicholas Magazine, says that Raphael rather was inspired by two children he encountered on the street when he saw them "looking wistfully into the window of a baker's shop."